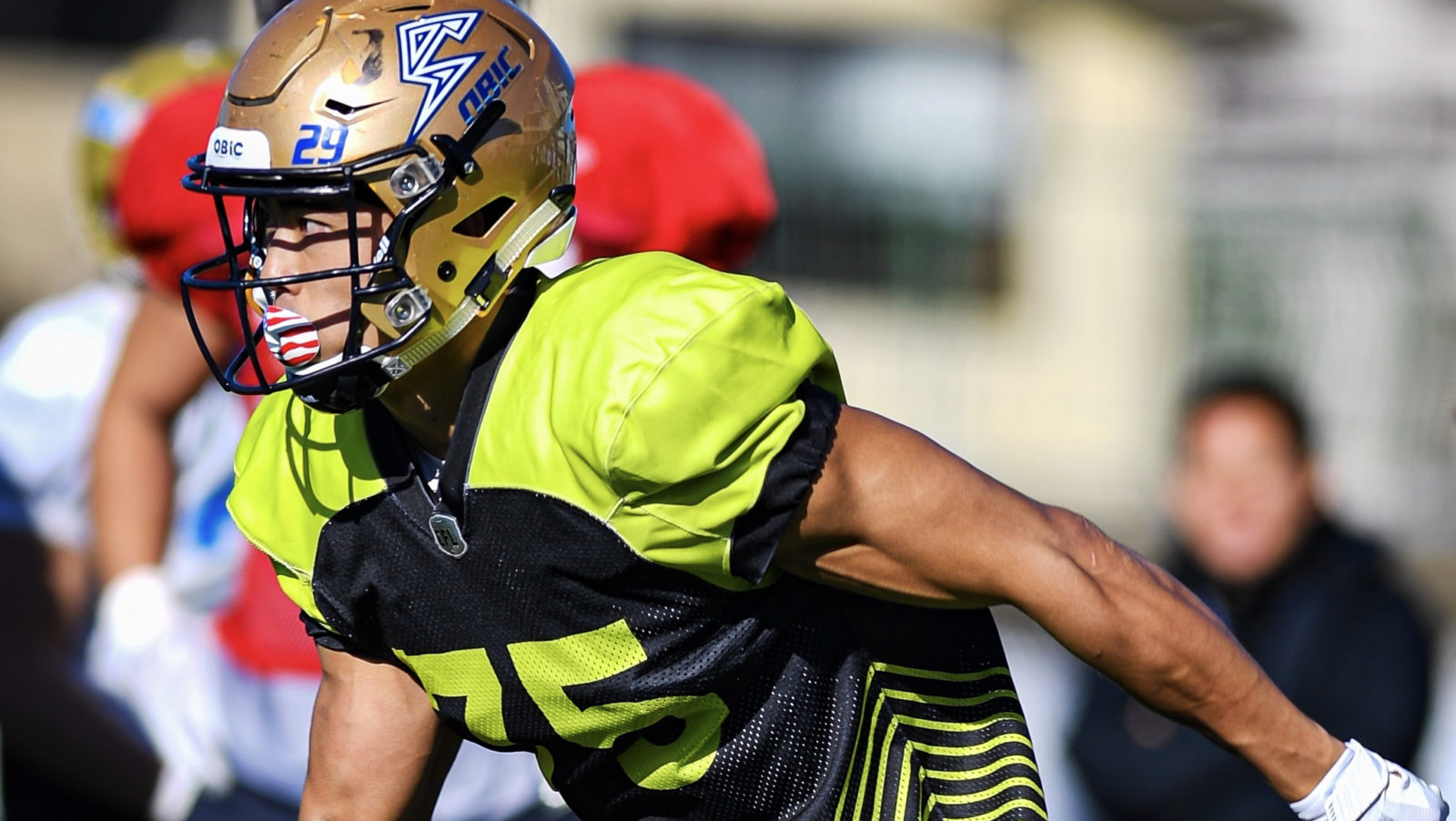 Japanese running back Taku Lee, one of the two players selected from the two CFL Global Combines that were held in Japan in February this year, has had two dreams since he was young.

To play professional football and become an airline pilot.

Three years ago, the 25-year-old from Nagoya, Japan realized he had to make the choice. He had been working for Japan Airlines and was getting ready to enter their pilot training school. He was also playing football for the Obic Seagulls, one of the top teams in Japan for the past decade.

He decided to put his lifelong dream of being an airline pilot on hold. He knew a football-playing career could be short so he had to focus on it entirely. Much to his family’s disappointment, at the time.

MORE FROM ROGER KELLY
» Adam Rita continuing passion for coaching in retirement
» Lucky 13: How Czech-Canadian DE Alain Pae landed with the Esks
» From the Bergamo Lions to the Grey Cup: Danny Maciocia’s time in Italy 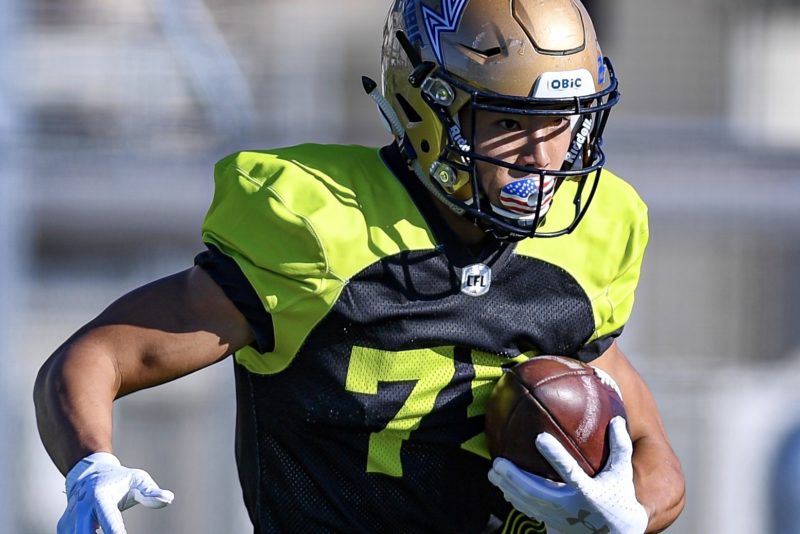 Taku Lee had two dreams since he was young: to play professional football and become an airline pilot (Photo: Megumi Sugita)

“I had been dreaming of being a pilot ever since I went to the airport as a kid to see my sister off when she flew to the United States for college. After I finished university I went to work on the ground staff crew for Japan Airlines at Narita Airport when I realized that to make it in pro football, I had to devote myself full time at it. My father didn’t want me to quit my job but I knew this is what I wanted to do. I would still have time to be a pilot afterwards.”

So he left his job, found a sponsor in order to survive, and worked out even harder while looking for opportunities.

Greg Quick, CFL Head of Global Scouting was happy he did. Quick first saw Lee at the CFL Global Combine in Japan in February of this year and knew right away he was a special player:

“You could see just in the drills how dynamic he was. He is the prototypical running back for CFL 2.0. He can run with speed and power and vacate the box to get into space. And when he does he is deadly. He knows where the end zone is.”

At six-foot-one and 205 pounds, Lee is sturdy enough to take the punishment of the North American game, but even he admits that the pounding of the game on this side of the Pacific is different than at home.

“I had a chance to play two games in The Spring League last year and really took a pounding. The players were fast and big and it hurt the next day.”

Still, the experience in TSL while daunting, was valuable and didn’t deter him. He learned he could compete at this level.

Following the CFL Global Combines in Japan, he headed to Los Angeles earlier this year to attend the EXOS combine preparation program.

“I spent almost a month there earlier this year preparing for the CFL Global Draft but as soon as the coronavirus pandemic hit I flew home to Japan and I have been here ever since, waiting.”

Although it might be assumed that Lee would be impatient with his big career chance seemingly slipping away because of the situation, that fact is, he’s not. He had already taken the long road to get to this stage. He has been playing football since he was 12 years old, in middle school. In contrast to many places around the world, football in Japan is not club based. In other words, it follows the North American model.

“I started playing in middle school and discovered that I enjoyed playing running back and that I was pretty good at it too. I fell in love with the game and continued playing in high school and university.”

It helped that in a country where American football is still a “small sport,” his parents grew to love the game too.

“My parents and sister have always been very supportive. I also played tennis and practiced Kendo, but they grew to really like football.” 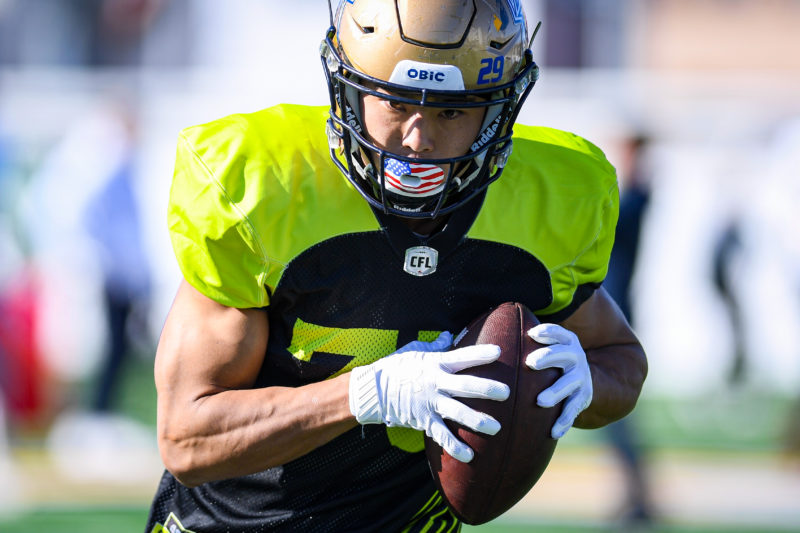 Lee was one of two players selected from the two CFL Global Combines that were held in Japan in February this year (Photo: Megumi Sugita)

Since Japan has both high school and college football, Lee continued playing first at the Nanzan Boy’s Junior & Senior High School in Nagoya. During that time he had a chance to experience a homestay in Ashland, Oregon, and while he was there attended University of Oregon football games. He was astounded by the cheering crowds.

That experience made him want to play for a U.S. college, but it didn’t happen.

“A friend of mine in the States tried to help me go to junior college but my English skills were very poor, not good enough for school there.”

Following high school, he went on to Keio University under head coach David Stant. He enjoyed an excellent career and by his senior season with the Unicorns he was dominating winning back-to-back college rushing titles in 2015 and 2016. The Japanese national team added him to the squad, the only college player on the team, to play in the 2015 World Championships. By the time his college career was over, all of the top teams in Japan’s X League were waiting. He had his pick and chose the Obic Seagulls.

“My college coach had then become he head coach of the Seagulls. He had inspired me so much in college that I only wanted to play for him.”

So, he signed to play for the Seagulls in 2017 while also joining Japan Airlines as a pilot candidate that same spring. He proved his talents that first season and was named XFL Rookie of the Year.  Which brings him to that fateful decision to choose football over flying – at least for the time being.

“Taku is an elite player, pure and simple. With his power and elusiveness, he will create matchup problems for linebackers. We watched him in his national team drills and asked him to go in for some tackling. He started popping people right away. He could be a dominant special teams player as well as running back. You could line him up as a gunner and he’ll perform.”

For now, the choice for Lee, although put on hold temporarily due to the COVID-19 pandemic, has been a natural one.

“I don’t regret it. Being picked for the CFL was huge. Although I didn’t know much about football in Canada before, I have had time to study it now. I can’t wait to get there and play with the pros.”