When you look at the list of running backs eligible for the All-Decade Team presented by LeoVegas, it looks like it could be an open and shut case. The stats point to a Canadian content dominance that rivals what Drake and Justin Bieber unleashed on the music world over the last 10 years.

When it comes to the running game in the 2010s, no one could stop Andrew Harris and Jon Cornish.

Playing with the BC Lions from 2010 through 2015, then signing with his hometown Winnipeg Blue Bombers in 2016, Harris racked up 9,038 rushing yards and 46 touchdowns through 151 games. He added 30 more touchdowns with his 565 receiving yards; the best production by any RB on the ballot.

Cornish’s career spanned nine years (2007 to 2015), but didn’t really find his groove as the Calgary Stampeders’ tailback until 2010. Over the last decade, the New Westminster, BC native put up 6,455 yards on the ground, with 41 touchdowns, adding 1,564 receiving yards and eight touchdowns.

While Cornish lags behind in years played and the subsequent yardage that comes with it, he did win the Lou Marsh trophy in 2013, as Canada’s top athlete of the year. Harris, conversely, became the first player ever to win Grey Cup MVP and Most Valuable Canadian when the Bombers won the Grey Cup last November. Both have won a pair of Grey Cups in their respective careers.

» VOTE NOW: Running backs and linebackers
» CFL to honour the best of the last decade
» Full list of nominees at each position
» ADT Voting schedule
» Berg vs. Ferg: Productivity or longevity?

So yeah, these two have set the bar quite high. Along with Brampton, Ont.’s Jerome Messam, who won the Most Outstanding Canadian award in 2011 and 2016, playing for Edmonton and Calgary, respectively, they took control of what’s generally an American roster spot and owned it, first-through-third for 10 years. Through nine seasons with five teams, Messam put up 5,689 yards and 34 touchdowns on the ground and 2,022 receiving yards and one touchdown.

Maybe it is a two-horse race. But there are a lot of standouts in the rest of the pool, where a string of American players made up for a ton of production and became familiar faces to fans across the country.

Brandon Whitaker is the first American on the list, stats-wise, and deservedly so. Through five voting-eligible seasons in a pass-happy Montreal Alouettes’ offence, Whitaker amassed 3,225 rushing yards and 14 touchdowns, while pulling in 1,621 receiving yards and a dozen touchdowns. Known for his versatility, (if you close your eyes, you can hear TSN’s Matt Dunigan calling him Two-Way Whit), Whitaker was with the Argos from 2015 through 2017 and kept producing, with 2,153 yards on the ground and 1,253 receiving yards. He led the league in yards once, in carries twice and most importantly, won Grey Cups in Montreal (2010) and Toronto (2017). 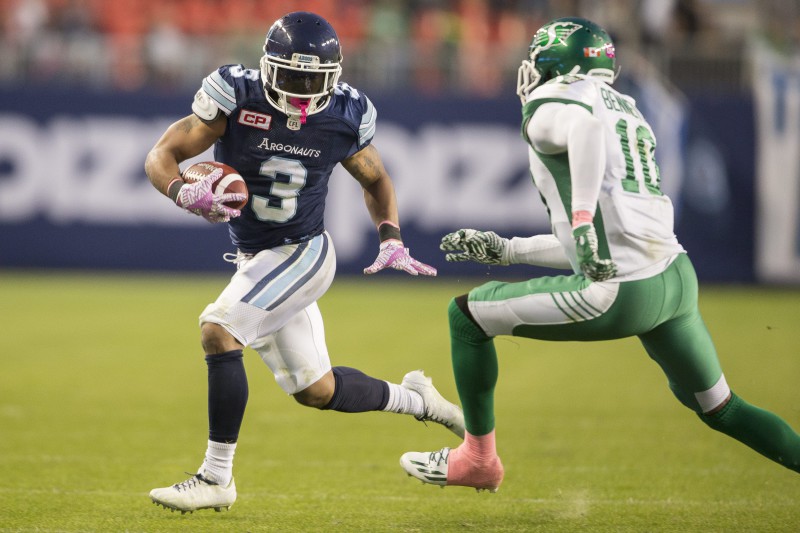 A threat every time he got the ball, Brandon Whitaker was the most productive American running back of the last decade (Geoff Robins/CFL.ca)

C.J. Gable appropriately slides in after Whitaker. The 32-year-old free agent established himself as a premier running back in the league over the last three years in Edmonton, where he helped the team to a West Final berth after arriving in a trade in 2017. He broke the 1,000-yard rushing mark for the first time in 2018 and duplicated the feat in 2019. He’s totalled 4,803 career rushing yards and added 2,225 receiving yards, which is third amongst all RBs over the last decade.

Like Gable, Jeremiah Johnson remains an active free agent that would like to continue adding to his stats. The 33-year-old came to the CFL in 2014 with the Argos and in stops in Ottawa, BC and Montreal has 3,683 rushing yards with 33 touchdowns and 1,607 yards in the air with 6 TDs.

There’s a handful of active players on the RB list.

Tyrell Sutton has signed to play with the Alouettes for 2020, the team he started his CFL career with. In seven seasons, the Akron, Ohio native put together 4,044 rushing yards with 54 touchdowns while adding 1,665 receiving yards and four TDs. Sutton led the league in rushing in 2015.

Saskatchewan’s William Powell has a lot of good football left in him. The 32-year-old has broken the 1,000-yard rushing mark three consecutive seasons. In BC, veteran John White had the first 1,000-yard rushing season of his career, after numerous injuries tried to slow him down over a six-year career. A CFL all-star in 2014 and Grey Cup champion with Edmonton in 2015, the 29-year-old still has time to continue adding to his trophy case.

VOTE NOW
Fans can now vote on the best Running Backs and Linebackers of the decade! 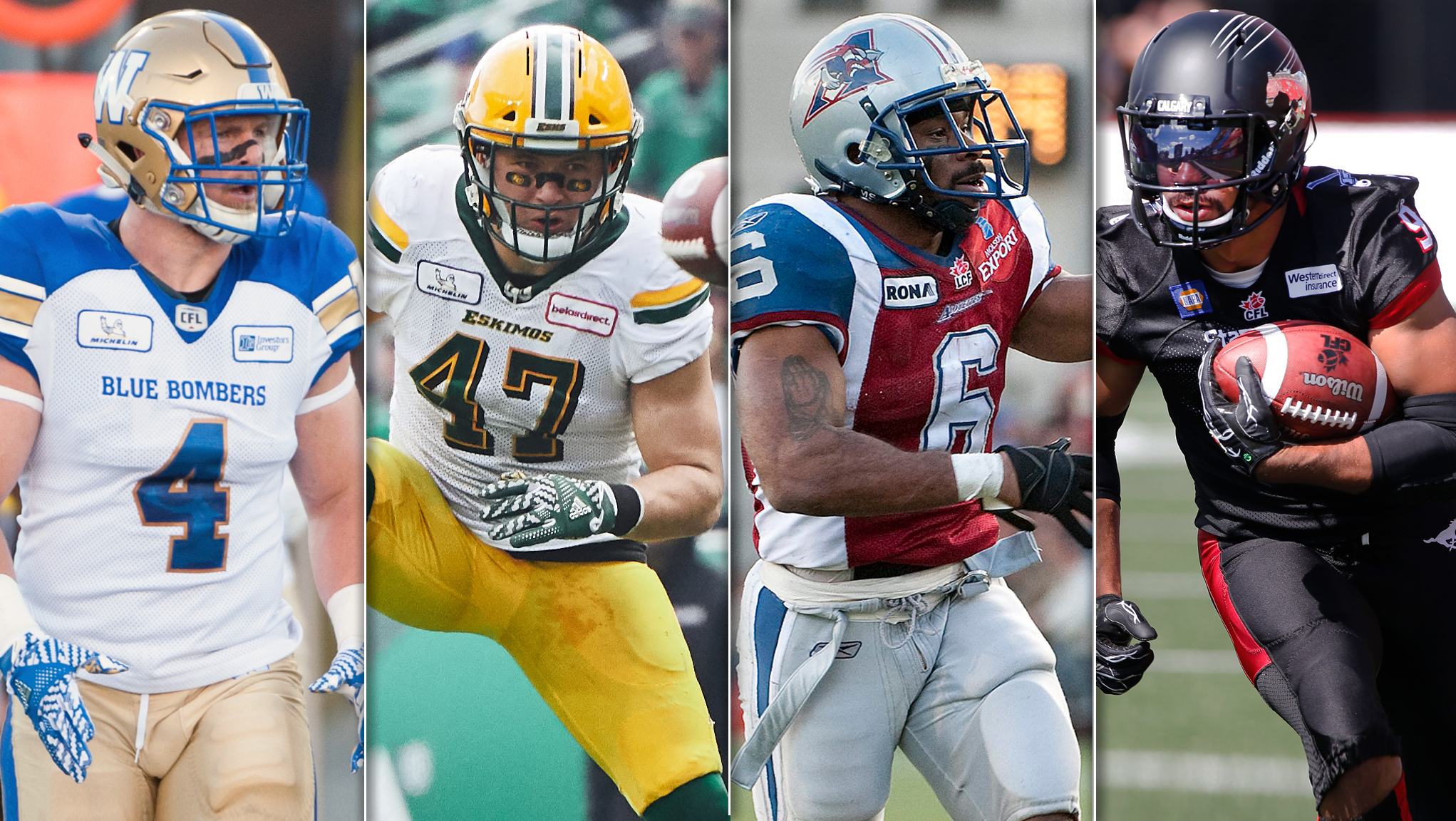 The three players at the end of the running backs’ list all showed greatness but are restricted here for different reasons. Cory Boyd only spent three seasons in the CFL, but was dominant in his time in Toronto, where he led the league in rushing in 2010, with 1,359 yards and was the Argos’ MOP. He rushed for 1,141 yards in 2011 in Toronto but was released by the Argos midway through the 2012 season, despite leading the league in rushing at the time. He finished the year in Edmonton in a crowded running backs room.

Kory Sheets had a short stay in the CFL, playing 33 games, but his star was blindingly bright while he was here. He posted back-to-back 1,000-plus rushing yard seasons, including a 1,598-yard season in 2013 that was somewhat overshadowed by Cornish’s MOP season (Cornish had 1,813 yards). In the 101st Grey Cup, Sheets was the last man standing. He rushed 20 times for 197 yards and two touchdowns, being named the game’s MVP in the Riders’ emphatic win at home.

Avon Cobourne came to the CFL in 2006, with his career stretching seven years. The MVP of the 2009 Grey Cup, Cobourne put up 2,654 rushing yards in the voting-eligible years of 2010 through 2012, with 16 touchdowns and 1,352 receiving yards and three TDs. He started his CFL career as a linebacker and became a feared returner in the league before assuming starting duties in Montreal. He was a member of the 2009 and 2010 Grey Cup-winning Als.