O’Leary: Enlisting some help with choosing the o-line on the all-decade team

O’Leary: Enlisting some help with choosing the o-line on the all-decade team

Welcome, esteemed voters, to the most difficult part of our journey.

Years of voting for all-star teams and end of season awards have taught me that these next two weeks should be the hardest part of choosing who sits on your version of the All-Decade Team presented by LeoVegas. It’s not about the defensive line. There are stats and a clear visual of success — he gets around/past/through his opponent and gets pressure on and/or hits the quarterback — to steer you to your decisions there.

Our issue sits with the guys that try to stop them and protect the quarterback. A position that has no stats (“no positive ones, anyway,” someone tells me) and is sometimes prone to being recognized by voters based on variables that can be attributed to scheme, the four guys working alongside him or their team’s record.

All of this to ask the question that finds its way to my lips every time a football ballot of any kind lands in front of me: How do I pick the offensive line?

For the gargantuan task of recognizing the proper gargantuan humans, I went to someone that’s been an o-lineman and has been around them for most of his life.

» CFL to honour the best of the last decade
» Vote Now: Offensive line and defensive line
» Full list of nominees at each position
» ADT Voting schedule

“I think longevity has a big part to do with it. I think it’s such a physical and tough position to play that anybody that has any type of longevity (deserves recognition),” said Kelly Bates, the BC Lions’ offensive line coach.

“I think the awards are for the most part based off of the teams that have the most success and that isn’t always a key indicator, but it is an indicator of someone who still plays well.”

Bates looks back at his playing career and points out that when the Lions started rattling off winning seasons, he looked at whichever of his teammates on the line getting recognition as a reflection of the entire group’s work.

“It’s not an unfair way to do it and there’s legitimacy to (selecting a lineman from a successful team),” he said. “But that doesn’t mean to say that the best lineman in the league couldn’t play on a 3-15 team. Offensive linemen are asked to do different things in different systems.

“Each position along that line has a different strength than what they’re asked to do. Tackles will face the smaller, speedier guys which are the position that get to the quarterback the most. The guards have got a combination of toughness and physicality with dealing with some decent quickness inside and then the centres rarely block anybody one-on-one. They’re typically the guys that get everybody in the right position to have any success. There are so many different ways to look at it in terms of what makes someone the best at his position. That’s why (awards are) such a subjective way to look at things.”

That said, when Bates looks at the past decade — and he gives the caveat that he spent three years as the head coach at Simon Fraser University, away from the CFL — he can fairly quickly make his o-line selections. 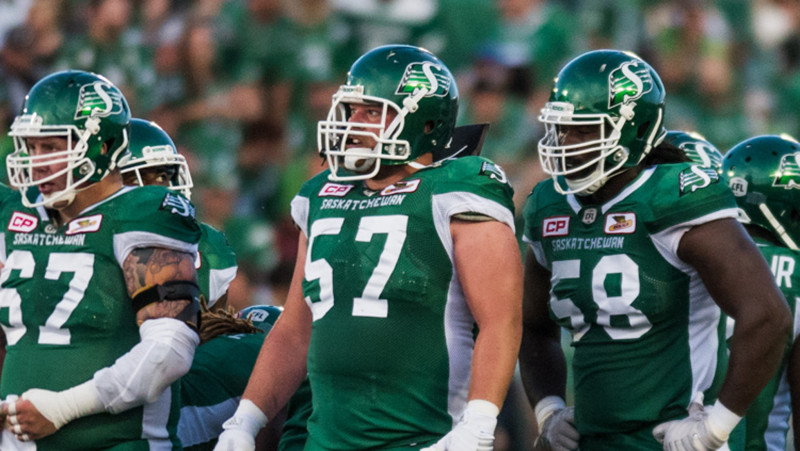 He likes a pair of Stampeders, in Pierre Lavertu and Brett Jones at centre, giving the nod to two players that had relatively short stays in the CFL. Lavertu retired after three full seasons in the league after injuries piled up on him and Jones left for the NFL in 2015, after two dominant seasons with the Stamps.

He immediately put Saskatchewan guard and six-time CFL all-star Brendon LaBatte on his list and then went a little off the board, with Calgary’s Shane Bergman.

“Bergman is very interesting to me. There’s a guy that doesn’t get a ton of awards, but he’s been as consistent as it gets and (the Stamps) think very highly of him,” Bates said.

“I’ve always been a fan of his. I like how he plays the game. I got to meet him last year, I spent (training) camp with the Stampeders and I just like his approach to life. I’m a fan.

“When I was doing the draft with the Lions (in 2013), if Calgary doesn’t pick him, we pick him with our next pick. That’s happened a few times.”

At tackle, Bates would go with last year’s Most Outstanding Offensive Lineman, Chris Van Zeyl and a former teammate and a six-time CFL all-star, in Jovan Olafioye.

“I don’t know Chris personally but I love the way he plays the game. I love his physicality and his toughness, his meanness,” he said. “I think he makes the people around him better as a result. That’s me as a fan watching him.”

He called Olafioye a top-five offensive lineman overall in the past decade.

“He came into this league as a guard that had no idea what he was doing and he was coached by one of the best in the business in (then-Lions’ o-line coach) Dan Dorazio and he took to (the tackle position). He’s a smart guy, quiet and played pretty well. Really well.”

Even in those five that he felt confident in, Bates admits it’s a tough list to make.

“You never want to forget or leave anyone off that list,” he said. “There’s good linemen out there, some guys get credit, not all of them do.”