Morris: 2011 Lions GC nothing short of a storybook ending 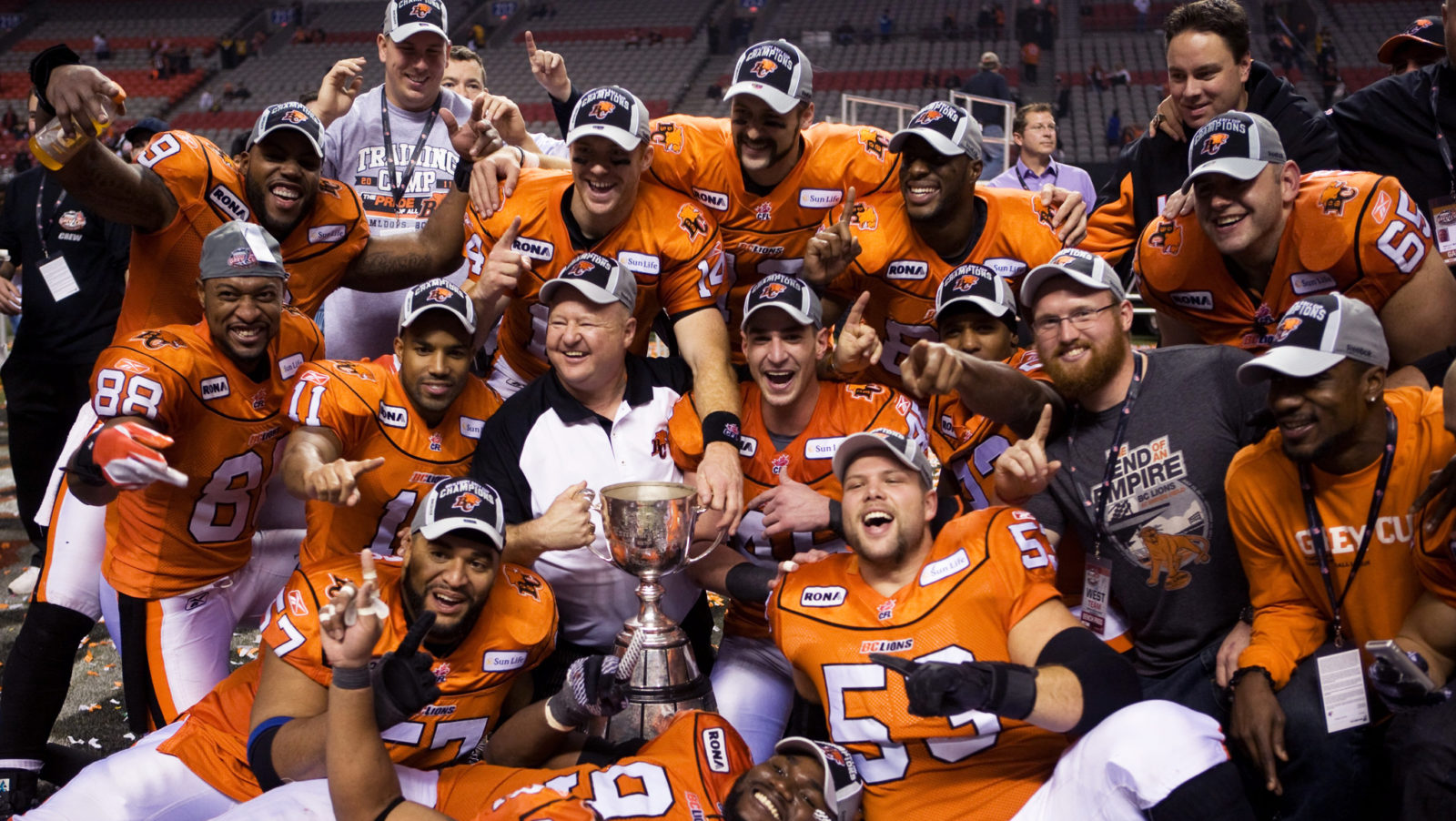 Morris: 2011 Lions GC nothing short of a storybook ending

Eight weeks into the 2011 season the BC Lions were a 1-6 team that looked like they were travelling in the fast lane to disaster.

Next up was a visit to Commonwealth Stadium to play the 5-2 Edmonton Eskimos, followed by a week off. Everyone in the dressing room believed another loss would probably result in the firing of offensive coordinator Jacques Chapdelaine and possibly wholesale personnel changes.

“We all knew that this was kind of it,” remembers centre Angus Reid. “We were going into a bye week and some people weren’t going to come back.

“The game plan was very much no holds bar. We went out and kicked some ass.”

Against the odds, BC pounded the Eskimos 36-1.

With Wally Buono as head coach, and a star-studded roster that included quarterback Travis Lulay, slotback Geroy Simon, linebacker Solomon Elimimian and defensive tackle Khalif Mitchell, the Lions won nine of their next 10 regular season games to finish first in the West with a 11-7 record. They defeated the Eskimos in the Western Final before winning their sixth Grey Cup with a 34-23 rout of the Winnipeg Blue Bombers in a refurbished BC Place Stadium.

It sounds like the plot of a Hollywood movie.

“It was definitely a crazy roller-coaster,” said linebacker Adam Bighill, who was a Lion rookie.

The Lions’ 2011 Grey Cup kicked off a 10-episode series called Remote Reunion driven by Kubota shown on CFL.ca. Joining Lulay and Simon to discuss the game are Simon, Korey Banks, Ryan Phillips and Mike Reilly, a backup quarterback on the team.

But long before the tickertape floated at BC Place Stadium, and an exuberant Reid danced with the Grey Cup, the Lions were all but left for dead after starting the season with losses to Montreal, Calgary, Edmonton, Hamilton and Winnipeg. The odds looked bleak for BC making an appearance in a home-town Grey Cup.

Most frustrating, the team wasn’t bad, it just wasn’t good at the right time. Three of the losses were by five points or less.

“The distinction between wins and loses at the professional level is usually one, two, three points,” said Reid, who played 13 seasons and was a three-time West Division All-Star. “If it’s bigger than that, there’s a problem with your personnel. Then it’s easy. We’re not good enough. Then you have to bring in a new team.”

Bighill said tumbling to 1-6 pushed the team to the brink.

“The tensions were high,” he said. “You could feel it throughout the locker room.

“In my career playing football up to that point, I’d never lost five games in a row in my life. I’d never been on a team that had such a terrible start.”

Reid gives credit to Buono, the Hall of Fame coach, for keeping the team on track.

“He doesn’t get enough credit for what a really good psychologist he is with players,” said Reid. “He knows how to push when needed and when to coddle when needed, and he usually does it opposite to what people think.

“When we were doing poorly, a lot people would get mad and yell and scream. That’s when Wally kind of coddles and tries to protect your ego. And when things are going good, that’s when he really challenges you, or reminds you you’re not too great, so don’t get out of control.” 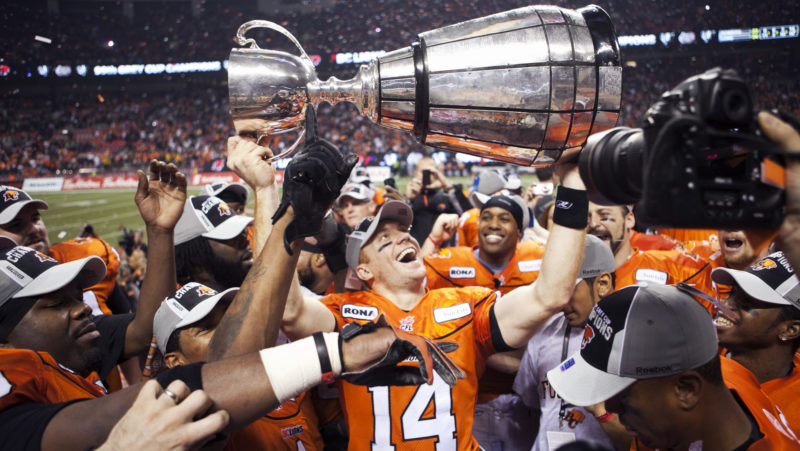 “They were continually trying to bring more out of guys with how we were competing at practice and how we were approaching every single day mentally,” he said. “The leadership kind of kept us on the right path and focused on each other. It didn’t get to finger pointing.”

Instead of an overhaul in personnel the Lions did some tinkering. In August, receiver Arland Bruce was acquired in a trade from Hamilton, adding to a receiving corps that already had Simon, Paris Jackson and Ryan Thelwell.

“He was the over-the-middle tough receiver that we didn’t really have,” said Reid. “And he brought a serious confidence swagger from the outside, which was kind of a nice injection.”

Bruce had 49 catches for 755 yards and eight touchdowns that season. He scored a touchdown in the final.

The Lions also signed defensive back Tad Kornegay after he was released by Saskatchewan. That allowed other players to shift positions in the secondary.

In just his second season with the Lions, the six-foot-six, 315-pound Mitchell established himself as one of the CFL’s premier defensive players. In 14 games he had 29 tackles and six sacks.

“He was a massive problem for offensives,” said Reid. “He was full of a fire.”

Another wrinkle for the Lions that year is they played their first five home games in a temporary stadium at Empire Field while BC Place Stadium was undergoing a $563-million facelift.

The first game in the renovated stadium was a 33-24 win over Edmonton on Sept. 30 which improved BC’s record to 7-6. Including the playoffs, the Lions finished the year 7-1 at BC Place.

“It was really cool to play at Empire, but we sucked there,” said Reid. “We didn’t play well for whatever reason.

“I think going to BC Place was just all part of the momentum we were building, of seeing ourselves as elite champions. When we walked into that brand new building, that sort of added to our own belief of who we were.”

The Lions became the first CFL team to start 0–5 and finish in first place. They also are the first team to lose their first five games then win the Grey Cup.

Reid was one of nine Lions named to the CFL All-Star team that year and one of 12 on the West Division All-Star team. 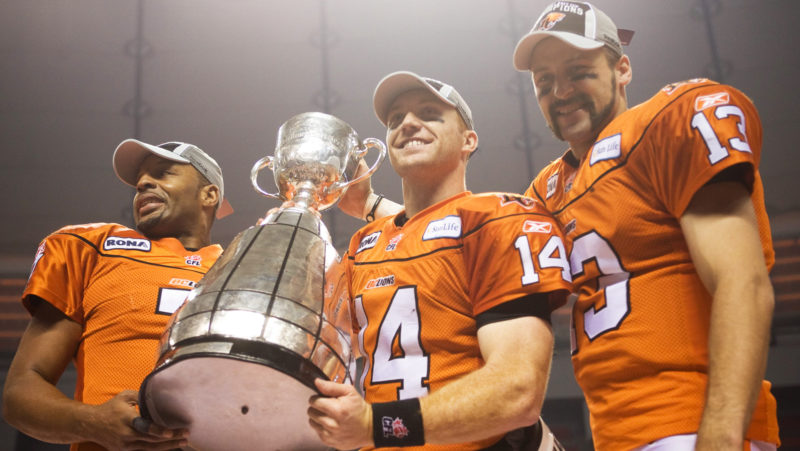 Bighill would go on to be named the league’s Most Outstanding Defensive Player twice and a five-time CFL All-Star but wouldn’t win another Grey Cup until last year with Winnipeg.

“The thing I learned about the CFL is how long the season is, how much of a grind it came be,” he said. “You need to get better every week as you get towards November.

“You have a long season to improve. You can make as many mistakes as you want (but) don’t make the same one twice.”

Reid is most proud of how the 2011 team refused to be pulled apart by adversity.

“There was a lot of potential for imploding,” he said. “We really did hold together. Every day we had (media) asking ‘what’s wrong.’ Human nature (is) point the finger elsewhere.

“We didn’t do that. We really did bond. We did a lot of internal problem solving as a unit and looked to ourselves and decided to hunker down and fix this internally.”