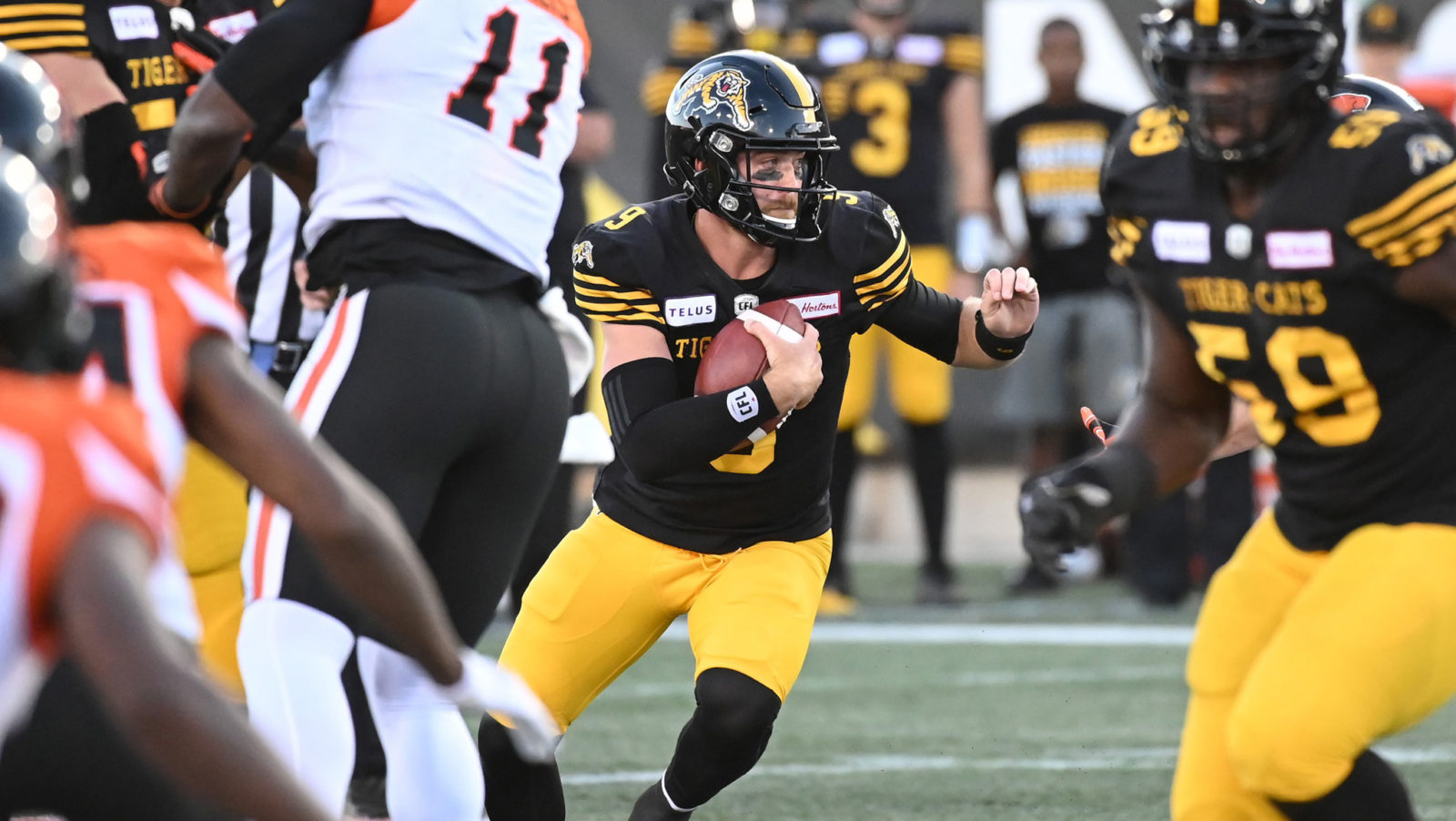 Dane Evans had something to prove during Week 9’s contest against the BC Lions.

It was his second start of the 2019 season, a year that he would eventually lead the Hamilton Tiger-Cats to the Grey Cup after Jeremiah Masoli was sidelined with an injury. Leading up to the contest, he had been working all week with offensive coordinator Tommy Condell until eight or nine at night trying to put together a game plan that best suited him and the rest of the offence.

This game was his chance to prove to everyone that he was the right one to lead the charge.

“I just remember that we put so much work in during the week, that when it finally came to game day, I just had a great feeling all the way around,” said Evans, who was chatting over the phone while fishing near his off-season home in California. “We scored on the first drive in a couple plays, if I remember. We came out on fire and then BC answered right back and I knew we were in for a dog fight right there.

“I remember all the guys on the sideline, kind of looking at me like, ‘alright, are you going to be the guy? Can you do this?’ I was so happy when we got the ball the last time to take it down the field and score with less than a minute left. That was where I kind of felt like I proved to everybody that I can do this and just stay with me and I promise you I’ll get you in a good spot.”

The final drive of the mid-August cat fight was the bow on top of what ended up being a battle to the very last whistle. With just over a minute left, and the Ticats trailing by six, the Lions punted the ball away and into the hand of 2019’s Most Outstanding Special Teams player, Frankie Williams.

Williams bolted down the field, a 57-yard return, to give the Tabbies great field position inside BC’s 30-yard line. And then it was up to Evans and the offence to finish the job. Hamilton’s pivot knew they were going to score points, either Lirim Hajrullhu would boot a field goal or he would help orchestrate a touchdown drive. A touchdown was, of course, preferable.

“That (return) took all of the pressure off of us right there because he returned it so far that he ate up so much yardage that we didn’t have to get,” remembered Evans. “As an offence when we come out there, inside the 30, I knew we already had points. We needed to score a touchdown, obviously (to win).”

Based on where they were on the field, Evans and co. knew that they only had a certain amount of plays that they could run. Condell and Evans had talked all week about what they would do if they were inside the opponent’s 30-yard line and he remembers that the preparation had taken the pressure and nerves off of him.

He first threw to Banks, but it was knocked down by Aaron Grymes. He tried again and this time connected with last year’s Most Outstanding Player and Banks scored the game-winning major.

“And then, when you take into account of momentum, (Williams) flipped the spectrum,” said Evans. “That return put the fans alive, everyone was on their feet. The whole sideline, everyone was rallying their towels and everything. He really, really helped us without even being on the field on offence because he limited the plays we could run and we all knew that as an offence.”

The game was full of back and forth momentum swings. The Ticats started off with a quick TD and the Lions responded with their own touchdown. In the second quarter, John White scored his first of two touchdowns but on the ensuing kickoff, Williams weaved down the field 108 yards and into the end zone as the momentum pendulum swung back towards the home team.

“I think one time we got the ball backed up inside our own five and it’s hard to do anything when you get that type of field position and then we got it inside our own 10 and we just weren’t getting very good field position,” Evans said, explaining the ebs and flows of the game.

“BC kind of had some things figured out on defence and like you said, John (White) was over there doing his Oskee Wee Wee in the end zone. I thought that was awesome, by the way, when he did that. It’s really tough because you don’t want to press so hard that you’re trying to force these big plays and now it’s second and 10 or even third and 10 later in the game. Really, you just have to have faith in everything. Have faith in the o-line that our run game will open up some things and just keep pressing.”

And they did keep pressing. Pressing enough to have an epic fourth quarter comeback and for the Ticats’ QB to notch his first win of the year.

But as we’ve grown to know and love in the CFL, the game isn’t over until it’s over. The Lions tried one last attempt on the final play of the game, as Ryan Lankford hauled in a Hajrullahu punt, and then punted it and recovered it himself.

Nothing like an only in the #CFL moment. pic.twitter.com/y8pGUOSM19

“When he (Ryan Lankford) punted it, I always talk with the equipment guys about it and we always joke around about getting onside kicks. As soon as he punted it I was like, ‘oh crap. Nobody’s covering him.’ Then sure enough, it bounces right into his hands and I don’t even know who made the tackle or what but I was just praying somebody was there to just stop him. We always joke around about it in our locker room and stuff but then to see it happen.. I stopped breathing! I was just waiting to see the play end. That’s so uniquely CFL that I didn’t know what to think. I was just in awe.”

But what Evans really remembers and appreciated about that contest at Tim Hortons Field was what Banks did after the game-winning TD.

“Actually when we scored that last touchdown, he (Banks) gave me the ball,” said Evans. “Kind of like, not a passing of the torch but he was like, ‘here, you can do this’ type of thing. That was really special to me because even though I’m a quarterback I still really look up to Speedy. All he’s gone through and everything he’s done, how can you not root for a guy like that?”

You can re-watch this Week 9 contest on CFL.ca on Thursday night at 8:00 p.m. ET in a condensed 40-minute version.