Riders’ Evans: ‘My main goal is to validate who I am’ 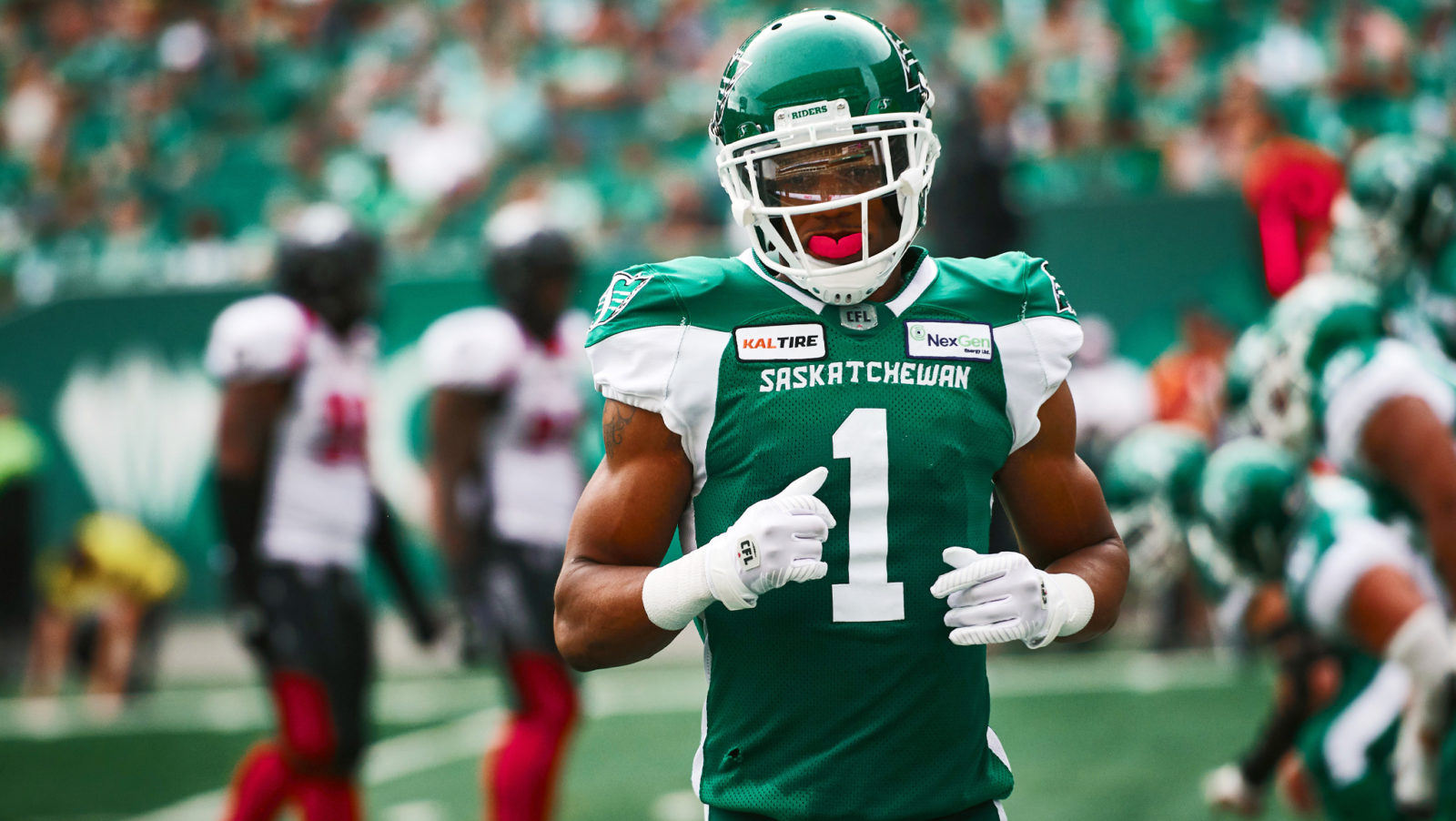 Riders’ Evans: ‘My main goal is to validate who I am’

Shaq Evans said he couldn’t point Saskatchewan out on a map when he first signed with the Roughriders back in 2018, but he has quickly become a household name in the province with his strong play in Green and White over the last two years.

The 29-year-old from California has travelled across the United States during his football journey, and now, he’s one of the biggest stars at his position in the Canadian Football League.

The talented receiver has gone from a new face to one of the leaders of the Riders’ offence, and despite setting career-best numbers in 2019, he’s far from satisfied with having just one 1,000-plus-yard campaign under his belt. 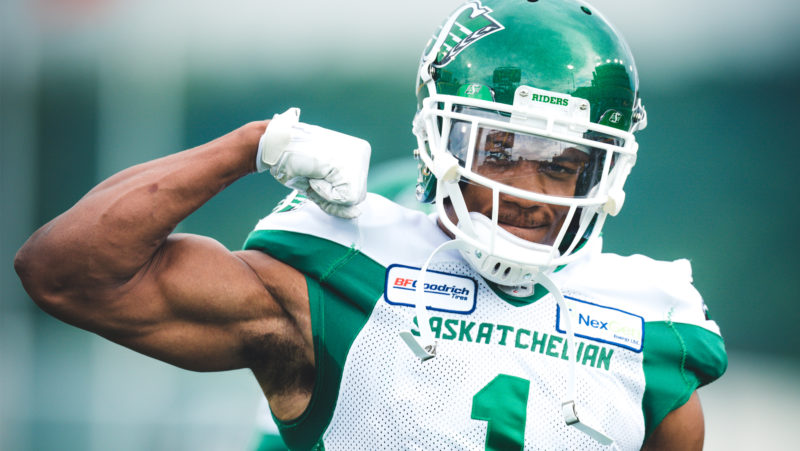 Before making his way to the CFL, Evans did spend a number of years in the NFL. Following his collegiate career at UCLA, Evans was selected in the fourth round of the 2014 NFL Draft by the New York Jets. He also had stints with the Jacksonville Jaguars, New England Patriots and Dallas Cowboys. After being released from the Cowboys’ practice squad in 2017, he looked for options

He had previously had a workout with the Roughriders, but he opted to continue to try to play in the NFL instead. Evans finally joined the Riders ahead of the 2018 season, signing his contract in February.

Once he put pen to paper, it was a crash course for him on the Canadian game. He needed to learn the waggle and three-down football.

“You can take a missed field goal back for a touchdown. When guys missed, I didn’t think it was a huge play,” Evans said of which Canadian-esque play caught him off guard the most. “You can kick the ball if you need one point. I’ve seen people kick the ball back and forth. Those kinds of plays were where I didn’t know what was going on. You can onside kick on a punt. That’s the kind of stuff that was confusing me.”

He became a full-time starter upon his arrival in Riderville, making it into 17 games in his first season up north. He made good on the extended playing opportunities, hauling in 50 catches for 785 yards.

“Our coach, Travis Moore, had us write down our goals at the start of the year. One of my goals was to have 50 catches and finish with over 600 yards,” Evans said. “It was crazy to look back and see that I accomplished what I had set out to do at the beginning of the year. So it was definitely a confidence booster to go up there and do what I did in my first year and have that kind of impact. I feel like I could’ve done more, but when you look back on it, it was like damn, that was a pretty good first season.”

One thing that stood out was the lack of a touchdown reception in his first year, soemthing that stuck with Evans going into his second year.

“So much has to go right for you to score, and to not be able to score in a season, it was the first time that happened to me in my life and it was definitely hard to deal with.

With that chip on his shoulder, Evans headed into 2019 with a point to prove.

With Jordan Williams-Lambert pursuing an NFL opportunity, it was up to the trio of Evans, Kyran Moore and Naaman Roosevelt to be the go-to targets for quarterback Zach Collaros. However, that plan would go up in flames on the first drive of the season.

“I was right there and didn’t even see what had happened until after the game,” Evans said. “Every team is prepared for injuries but nobody is prepared for it on the third play of the season. So it definitely sucked, especially for me because I didn’t practice for a lot of training camp.

“I practiced maybe once or twice and then played the preseason games but that was it. But we adjusted and we did what we did

The change at quarterback didn’t affect Evans’ production for the season. In Fajardo’s first two games as a starter, Evans had a combined 215 yards and 12 catches. He would continue to post jaw-dropping numbers throughout the season, finishing with 158 yards in Week 6, 160 yards in Week 8, 193 yards in Week 17 and 174 yards in Week 20.

In his first full year as a starting pivot, Fajardo needed a go-to target to help him out and Evans became just that.

“It was like divine intervention or something like that,” Evans said of their connection on the field. “We literally had zero reps together (before the Ottawa game). Just seeing how he prepares and how calm he was, I wasn’t worried about him; I just knew he was going to do well.

“All we had to do was come out prepared and he’s going to help us out and we’re going to help him out. We never even really thought about it. We just put lour heads down. There was no skip of the beat or anything, it was just next man up.”

The pair was even given a nickname because of the stellar connection: Shaqnardo. Although the pass-catcher did have a better suggestion for the future.

“The Suite life of Shaq and Cody,” he said with a laugh.

Evans finished with a career-best campaign, making 72 catches for 1,334 yards — which was a league-best — and five touchdowns. For the first time in his career, he earned West Division and CFL All-Star honours.

To boot, Evans, Fajardo and the rest of the Riders were able to get back to the top of the West Division in 2019, taking the top spot for the first time since 2009 in the late goings of the season.

Saskatchewan welcomed the rival Winnipeg Blue Bombers into Mosaic Stadium for the Western Final. In a highly contested matchup, one of those Canadian plays ended Evans and the Riders’ season in heartbreaking fashion.

Fajardo’s heave to the end zone intended for Moore hit the upright, ending the game in the process.

“Every time we needed to get it done, we got it done. So confidence was super high. We were thinking we were going to score, and at worst, we were going to overtime,” Evans said. “On that last play, I was like, ‘I don’t know who he’s going to throw to, but if he throws it here, I better make sure I catch it.’

“But then, I saw Swerve (Moore) was kind of open and I thought if that gets through, he has a chance to make the catch. But then when it hit the pole, you just felt the life leave the stadium. My route was already by the locker room, so I saw it hit the pole and I just put my head down and walked to the locker room. To lose, it never crossed our minds during the week. We were so hot and never thought about it, so when we did lose, it was devastating.”

Heading into the off-season, Evans was a pending free agent. He was dealing with a broken toe, so he had one NFL workout, but nothing came to fruition.

Evans said that there was significant interest in him during the process, with a few select teams pushing hard to land his services. But at the end of the day, his heart was still in Saskatchewan.

“It was cool just being a guy that was wanted for once,” Evans said of the free-agency process. “I didn’t have to sell myself to get signed to a team. Just to be the guy that had coaches calling him, that was cool. But I’ve only been in the league for two years and all I’ve known is Saskatchewan. So it was going to take a lot for me to leave.

“They gave me what I wanted and I didn’t want to leave and change QBs again. So it wasn’t really that hard for me. I always said, ‘Let’s sign in Sask, let’s make it happen.’ I told my agent that my first option was to work out a deal with Sask and everything else comes second.”

Now that he has a new contract signed, focus has shifted to 2020. Evans is back home in Anaheim, California, where he’s been training for a possible season.

With All-Star nods and a career-best year under his belt, Evans could be pushing to become an MOP candidate — Brandon Banks proved that a receiver could earn the league’s highest individual honour. But for now, he’s just looking to be consistent.

“My main goal is to validate who I am,” Evans said. “I just want people to understand that last season wasn’t a fluke. I’m not a one-year wonder. I’m a true All-Star and I’m one of the best players in this league.”