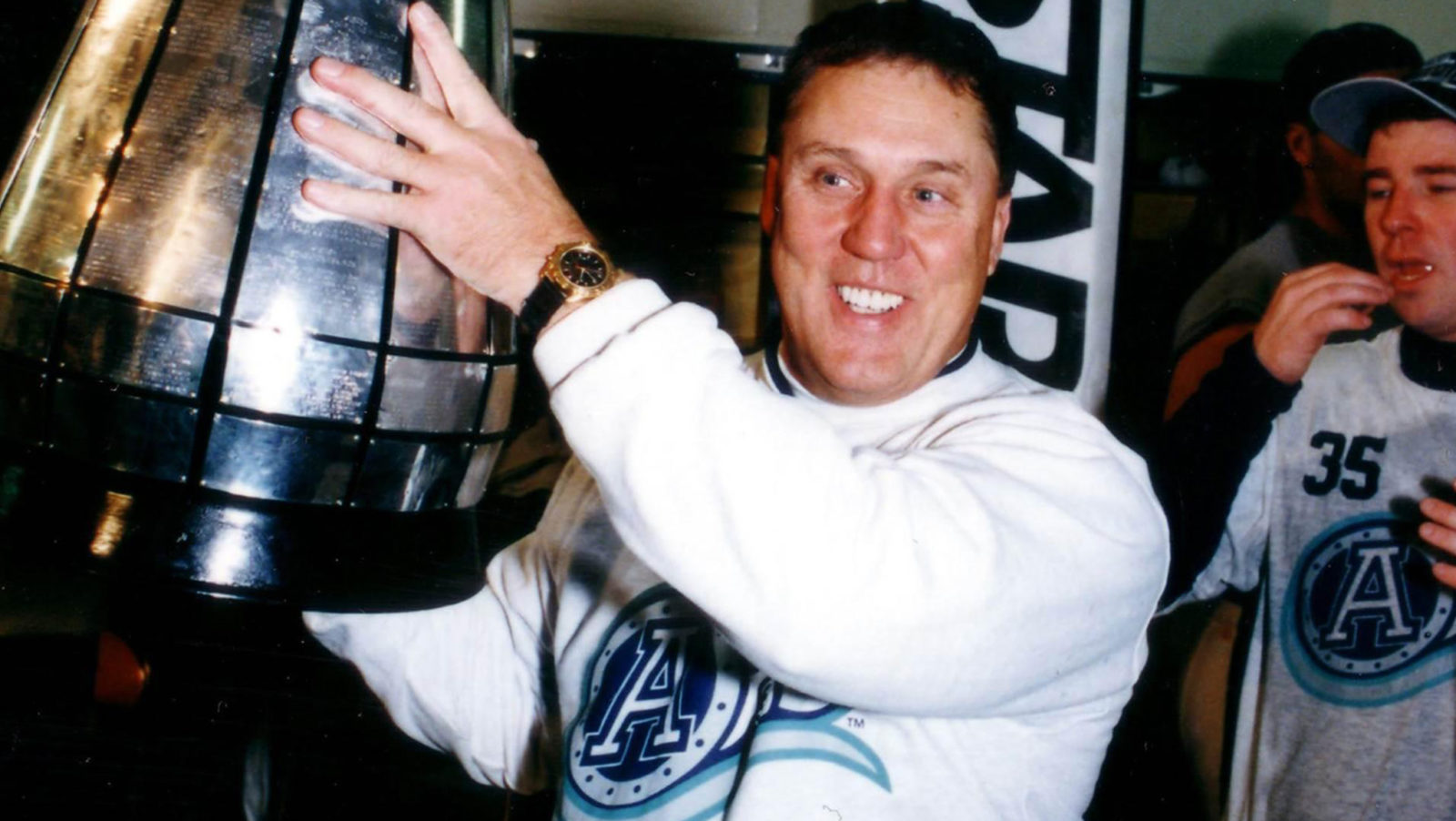 “For all the accolades that were thrown my way over the years, we had a damn good defence. We caused turnovers. We stopped people when we had to.”

t happens a lot, when people look back on the powerhouse Toronto Argonauts of 1996 and 1997.

They go on and on about the sensational offence, one that piled up points and yardage with what appeared to be great ease, under the guidance of quarterback Doug Flutie.

During back-to-back 15 and 3 seasons, capped by consecutive Grey Cup wins, that offence got most of the public glare, most of the love, and most of the credit as it garishly roiled the waters, leaving opponents thrashing in the wake.

Those who watched those Argonauts more closely, however, will tell you that the team’s defence of the day was a sensational, star-studded group all on its own, one that found its chemistry along the way to the first Grey cup win, then dominated all comers on the way to the second.

Some of the stalwarts from that group do feel they got shortchanged by being on the same team as Flutie and company. Not all though.

“I didn’t feel that way, personally. I’ve never felt that way,” says Winnipeg Blue Bombers Head Coach Mike O’Shea. “I’m sure I would piss off some defensive guys on those Argo teams, because we had good talent.”

Then, he laughs. “But we had Doug Flutie. It is pretty easy to play with a lead.”

Marcello Simmons, the three-time Grey Cup Champion who went on to coach special teams in the CFL before becoming a Special Constable for Peel Police, in Ontario, might be one of those players who felt the Argonauts’ defence of the day was overlooked. I tell him I’m working on a column on that band of brothers. His reply: “You mean you’re doing an article on the best defence in CFL history?”

In the second episode of CFL.ca’s newest content series, Doug Flutie headlines a list of former Toronto Argonauts who reunite virtually to re-watch a 1996 Grey Cup game that goes down as one of the most memorable in history.  Watch the entire episode here:

And Adrion Smith, the defensive back who sealed the 1996 Grey Cup Championship with a late game pick-six against Edmonton, kind of straddles the line. Flutie and Robert Drummond, and Pinball Clemons and Paul Masotti and Jimmy “The Jet” Cunningham swung from the chandeliers and got the headlines, he agrees. That the defence was just as good?

“If you’re a purist, I think you know that,” he says, flatly.

The 1997 Argonauts defence was a wood chipper, a machine that takes its place alongside some of the greatest defensive units in the history of the CFL, including the likes of the 1995 Baltimore Stallions, or the  “Alberta Crude” defences that anchored Edmonton’s run of five Grey Cups in a row. Or any other defence you care to name.

They topped the charts in pretty well all of the key categories; Only 18 points given up per game, a league best. First in rush defence, at 92 yards per. First in pass defence, and it wasn’t close. The Argos held opposition passing to 3,721 yards in 2018 (207 yards per game) and the next best unit was Hamilton’s, which gave up almost 1,000 yards more.

They forced more turnovers than the rest (65). Led the league in sacks (49). With 29 interceptions, only Hamilton’s 30 was a better number.

“For all the accolades that were thrown my way over the years,” says Flutie, “we had a damn good defence. We caused turnovers. We stopped people when we had to.”

If the Argos’ defence blossomed into an elite unit in 1997, the seeds were most definitely sown the previous season, as parts were continually put into place leading up to the 1996 Grey Cup.

For some, that wasn’t necessarily a predictable outcome.

Simmons had joined the team on the tail end of a disastrous 1995 season, one in which the Argos barely limped to a 4 and 14 finish. He came into 1996 with a lot of doubt and had no real idea who the team’s new head coach was, having spent two seasons in the NFL before his late season addition to the Toronto roster, playing for Bob O’Billovich. 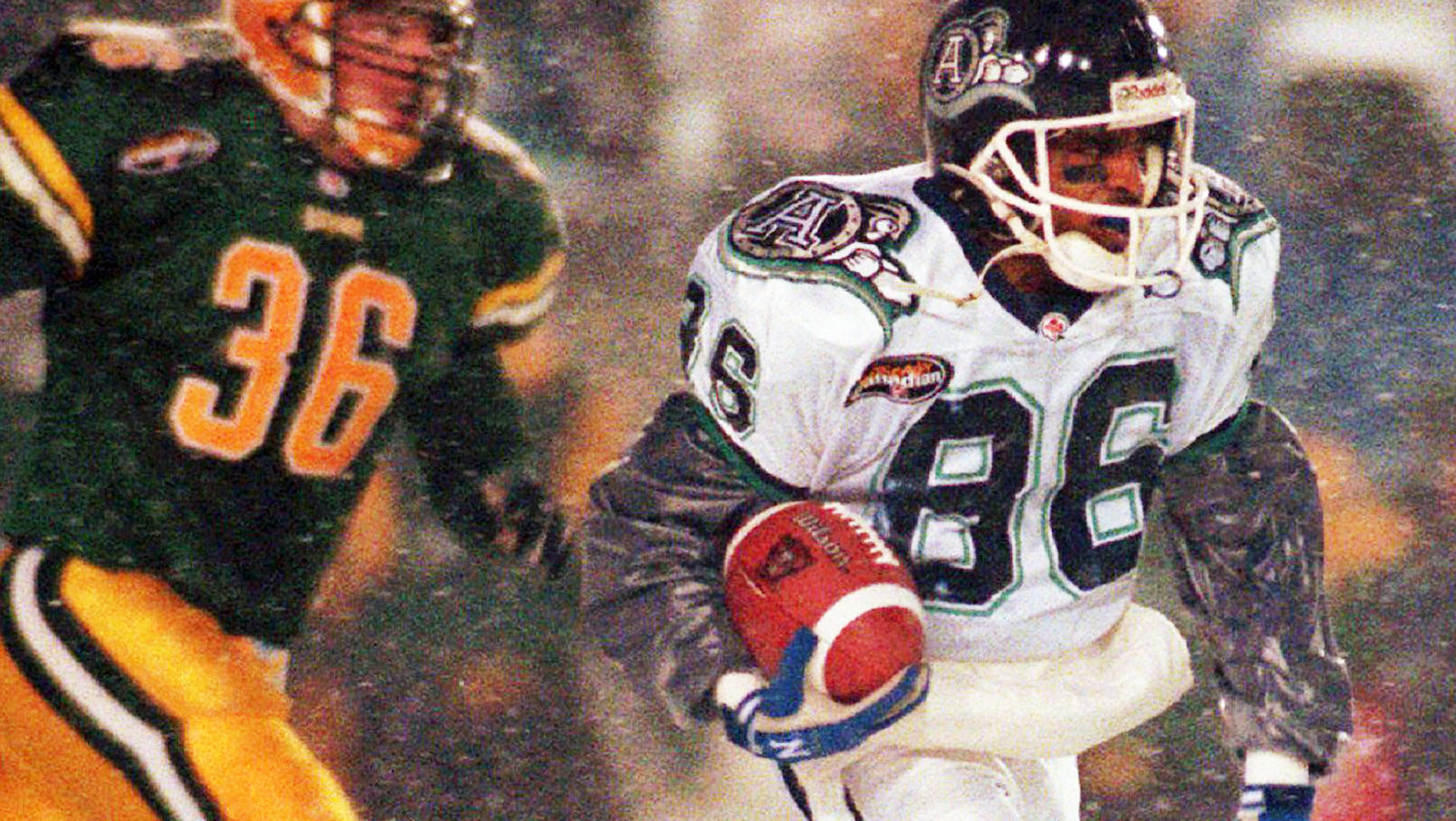 One of the players that often stole the headlines in 1996 was returner Jimmy 'The Jet' Cunningham, seen here breaking away from contain en route to an 80-yard touchdown in the 1996 Grey Cup (The Canadian Press)

After the season, O’Billovich was let go, and a new head man was brought in.

“We get this coach who comes in and he’s talking about living on the edge, and being competitive and being a players’ type of coach,” recalls Simmons. “And I don’t know if they’re just giving us some window dressing or what.”

That dude was Don Matthews, who’d guided Baltimore to a Grey Cup win in 1995 before signing on with Toronto.

It was Matthews who was the chief architect of Toronto’s defence – as he had been on previous teams, and he drew it up in simple terms, relying on young, fast, dedicated athletes to bring it to life.

“We were talented, we were aggressive, we were smart,” says Demetrious Maxie, currently the defensive line coach in Edmonton. “And Don allowed us to be ourselves and just let us play football.”

“We pretty much just came into a game with three or four defences that we ran,” Maxie explains. “And we just ran ‘em well until somebody was able to stop it. And nobody could.”

Back in the day, Maxie was one of those defensive linemen that gobbled up an opponent’s manpower, often requiring special attention to keep him at bay. He joined the Argonauts in October of 1996, after being released by the Montreal Alouettes.

Another key player ended up with the Argos that way. Lester Smith was cut by the Als at the beginning of the season, but by the time the Grey Cup came around, he’d won the starting safety’s job, in Toronto. In 1997 he was named a CFL All-Star.

And O’Shea? He’d returned to the CFL after a tryout with the NFL’s Detroit Lions, signing with the Argos in September of 1996.

He, Maxie and Smith all started in the 1996 Grey Cup and truth be told, the Argos’ defence didn’t have what you’d call a stellar outing. 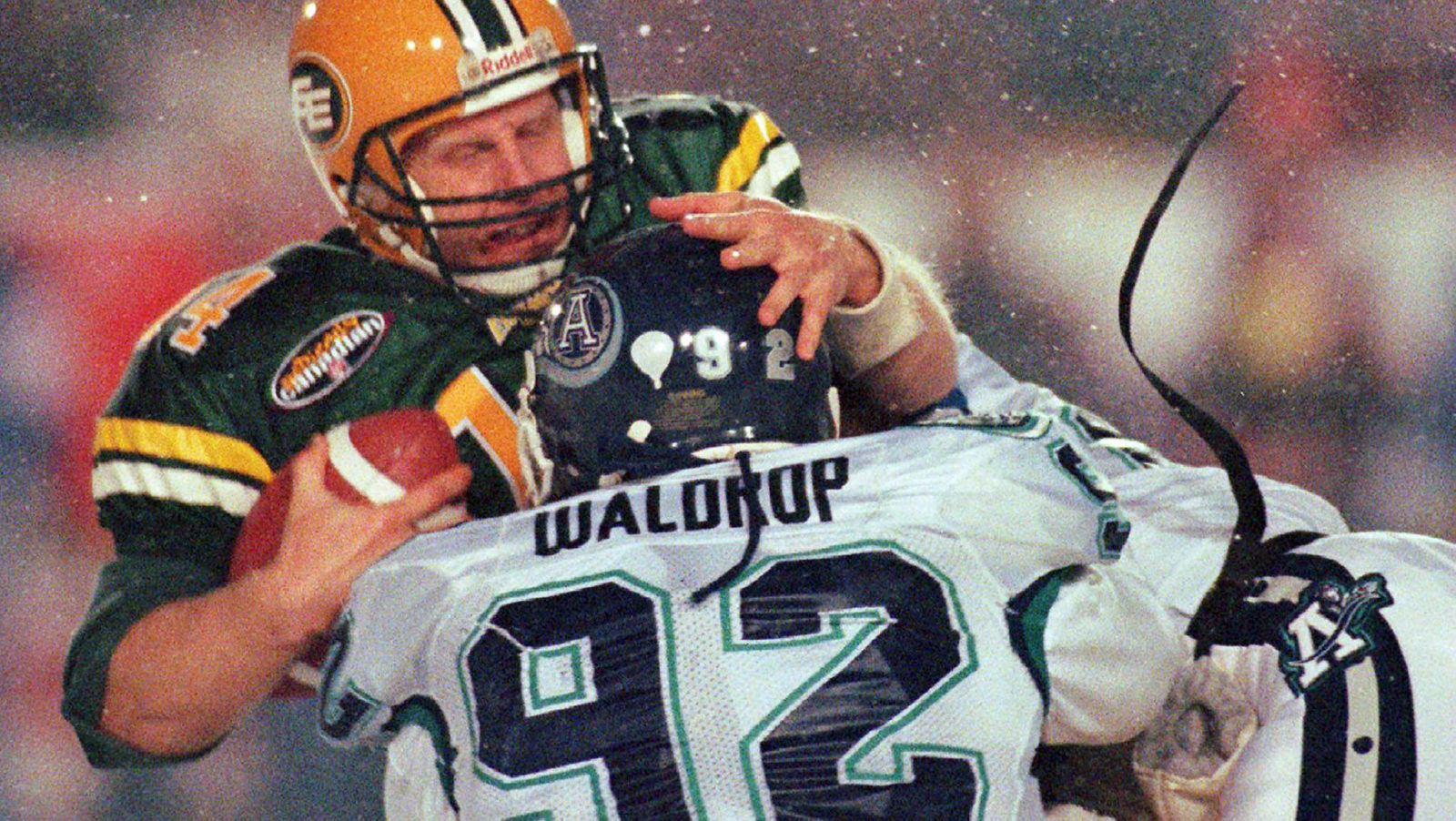 Defensive lineman Rob Waldrop gets in the grill of Danny McManus during the 1996 Grey Cup game in Hamilton (The Canadian Press).

Indeed, Edmonton quarterback Danny McManus ripped them up pretty good that day, but you maybe shouldn’t hold that against them, a snowstorm raging and all. Edmonton’s defence, ranked number one in 1996 in such categories as passing yards allowed, points allowed and sacks, was gutted too, once Flutie got his offence in gear after a slow first quarter.

Despite the mulligan in the Grey Cup, 1996 was promising for the Argos’ defence with it getting better and better, showing its teeth in the Eastern Final, in a 43-7 win over Montreal.

They were doing it by attacking the offence with lightning bolts that could come from anywhere.

“I would call it Don Matthews Sting Defence,” says O’Shea, referring to the straightforward but aggressive schemes employed by the Argonauts.

“It was just a one-plus pressure,” he says.

“That defence, it was not complicated,” remembers Simmons, who played both defensive back and linebacker. “It just wasn’t. We didn’t have all these complicated schemes and twists. You just did it.”

In its simplest form, the Argo defence merely sent one more pass rusher than the offence was prepared to handle, and they liked to do it on second-and-medium or second-and-long situations. We know it as ‘Cover Zero,’ these days. They ran it a lot, with opponents wondering where the blitz was coming from. “I think Lester Smith had four sacks in one game coming right up the “A” gap,” says O’Shea, incredulously.

But the thrust of the defence was not necessarily to create sacks, explains O’Shea. “It was meant to get the team off the field because they’d have to throw short underneath. Because there’s no time.”

With the opposition quarterback hurried into checking down to an emergency outlet, it was up to the Argos’ secondary to react quickly in order to snuff out any yards after catch. Smith, who now works as a correctional officer in the Youth Services Division for the province of Ontario, says the offensive tendencies of the day were helpful in making that job more predictable, and therefore more productive.

“At that point in time, the blitz convert for receivers was the out route,” explains Smith, who stands second all-time in knockdowns, with 105. “Now it’s the slant route. So we’d just be waiting on the guy to come out.”

If it seems like opposing offences should have been wise to what was going on, O’Shea would remind you that this was another time, and football hadn’t evolved into what we’re seeing out there today, with much more in the way of complicated scheming, on both sides of the ball. But at the time, he says, the defence the Argos employed was unlike anything he’d previously seen.

“The offensive scheme hadn’t adjusted to it,” says O’Shea, noting that Matthews would endeavour to stay a step ahead. “As they started to adjust to it, we would just add another wrinkle or change it slightly. Which would give them more to think about.”

Each of O’Shea, Smith, Maxie and Simmons agreed that another strength of the unit was the confidence each member of the defence had in the others.

“Trust and communication,” says Maxie, adding that thorough pre-game prep by dedicated players and coaches was also key. “We didn’t have stressful practices. Everything was formatted perfectly for that week.”

“Once we got in a game it just made everything easy.”

A final element in the success of that Argos defence would have to be Matthews’ keen eye for utilizing players in ways that would best suit their abilities, even if it wasn’t immediately apparent to that player at the time.

“He was very creative,” says O’Shea. “And took opportunities to put guys in different positions. And create positions for people.”

Reggie Givens was one of those people. A back-up middle linebacker for Matthews in Baltimore, he was turned into a rush end in Toronto. Givens would not just pressure the quarterback though. He would occasionally drop into pass coverage from the line, something that was indeed rare at the time. When the Argos showed a 3-4 look on defence, Givens returned to the position he’d previously known well. And he flourished as a catalyst that could confound opposing offences with unpredictability.

“I played rush end, I played linebacker,” Givens told CFL.ca. “I played on the offence. He let me put all my athletic talents out there. It was fun.” 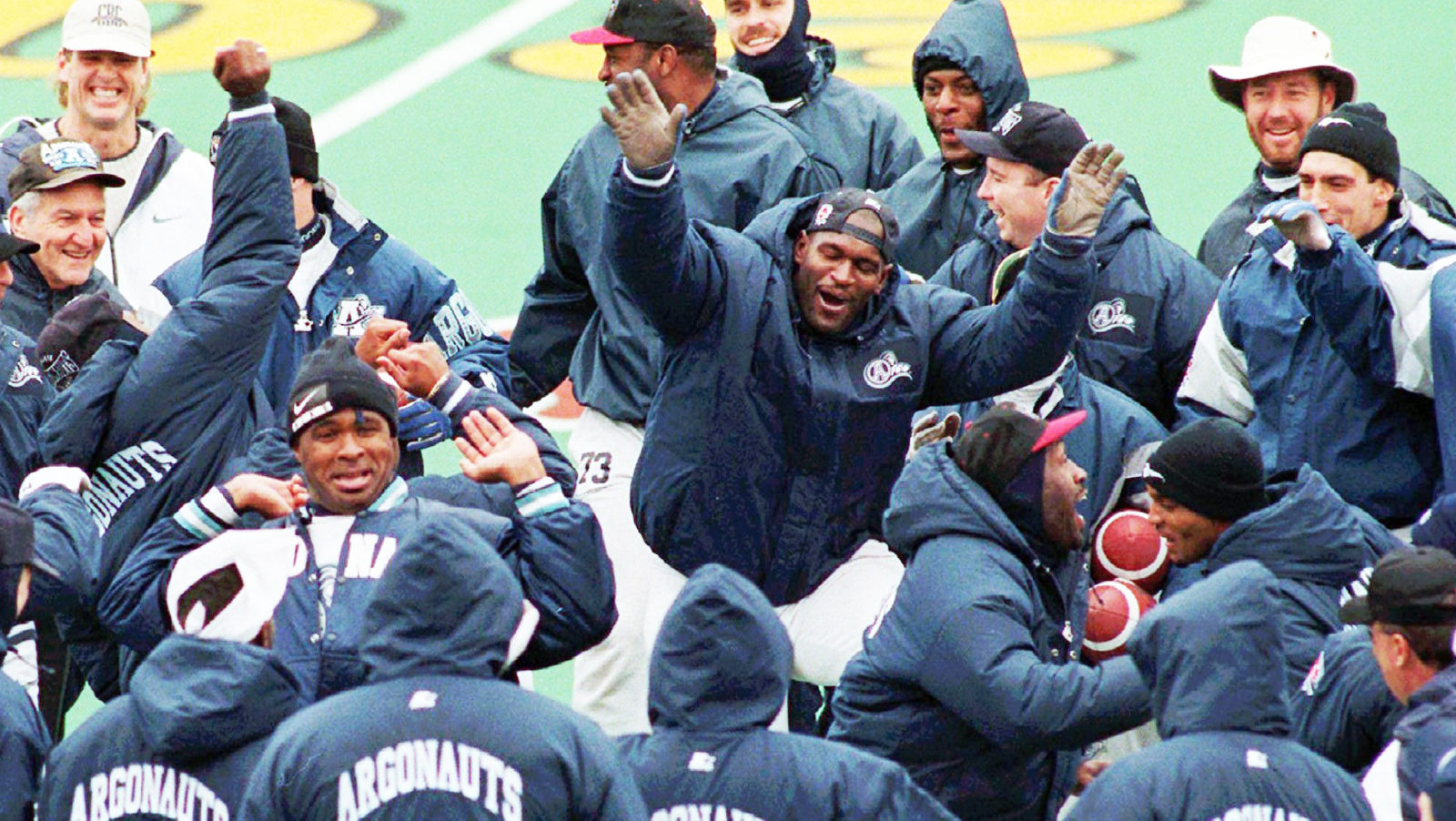 A confident defensive unit leads a loose Argos group huddle during walkthrough on the eve of the 1996 Grey Cup game in Hamilton (The Canadian Press).

“It was a loose group,” says Maxie, echoing Givens’ view that it was a joyful experience to play on that defence. “We had so much fun.”

Fun, yes, but only in its place. Smith remembers Matthews coming in to practice one day and asking if the players could guarantee a win that week. When they replied “yes,” he told them that practice was called off and that they could go home.

“But nobody went home,” says Smith. “Everybody went to the weight room, the film room, everybody hung around the locker room and played ping pong, dominoes. Or got their treatment. Nobody sloughed it off.”

A pretty good outcome, usually, for a an all-time defence that nevertheless still finds itself in the shadow of all that Flutie magic.