It’s impossible to talk special teams and not think of Craig Dickenson.

More specifically, Dickenson has spent essentially the past 15 years in that special teams coordinator role, starting with the Stamps from 2005 to 2009, before joining the Riders in 2011 and 2012. He moved to the Bombers for a year before a three-year stay in Edmonton. He was part of the Chris Jones-led exodus to Saskatchewan in 2016 and has put his roots down there. That blip on his CFL resume in 2010? Dickenson was in the NFL, working as a special teams assistant coach with the Oakland Raiders.

When it comes to the All-Decade Team presented by LeoVegas, Dickenson has worked with and against the top performers on special teams over the past 10 years. His all-time list stretches back into those 15 years and we’ll get to that soon, but for the purposes of helping voters make up their minds, a few names quickly came to mind for him, not all of them the most obvious choices. 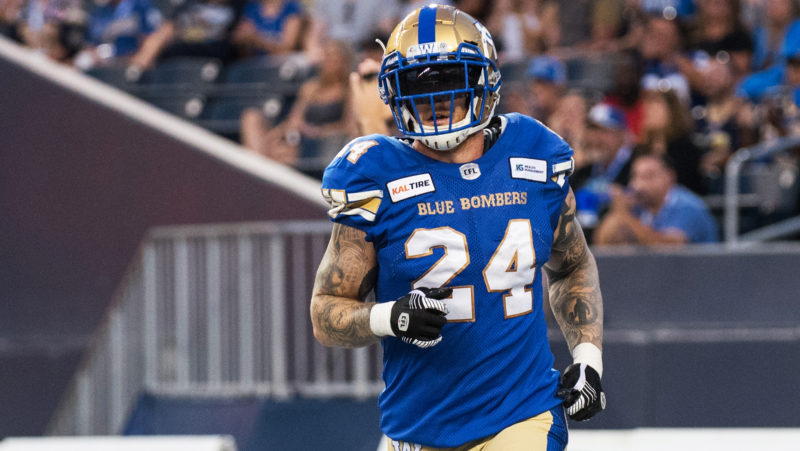 Mike Miller is just six special teams tackles away from passing Jason Arakgi for the all-time lead in that category (Photo: Bluebombers.com)

“You know who might have been the best overall special teams player that I ever saw in the league? It was Chip Cox,” Dickenson said.

“Chip Cox in his heyday in Montreal, that guy would play over 100 plays a game. He was on every special team — and we classify special teams as the big four, we don’t count field goal and field goal block, the big four being kickoff, kickoff return, punt and punt return. He played on all four of those when he was in Montreal and he played every down on defence and the guy never got tired. He was just a phenomenal special teams player and a phenomenal football player.

“In my mind, I know Wally (Buono) had him as one of the three linebackers and I totally agree. He was one of the best players in the league, literally for 10 years.”

Cox, who had an outstanding 13-year career and played in 228 games, gets his due on the All-Decade ballot but as a linebacker.

“The best Canadian that I thought of off the top of my head…Mike Miller has got to be in the mix. I coached him in Edmonton. I know he’s second in tackles, I think he’s very, very good and tough as nails, he doesn’t get hurt very often. He’s certainly up there.

“The best long-snapper I ever coached was Randy Chevrier in Calgary: Just dependable, he always got a spiral, it was always where it was supposed to be.

“The best kickers in my opinion, I’ve got three of them. You’ve got to include (Rene) Parades. The best one I coached personally was Sean Whyte in Edmonton and I think (Justin) Medlock is certainly an elite kicker right now.

“Punters, it’s a little tougher because they’re a little bit of a mixed bag. I think Richie Leone right now is as good as anybody that’s been in the league.”

At returner, Dickenson had a lot of appreciation for Marcus Thigpen, whom he said was very scary at the start of his CFL career, before he went to the NFL.

“He had the combination of track speed and he was a running back so he was strong. That year that Hamilton had him back there and they had this rookie by the name of Chris Williams back there that nobody knew about either. They were kicking away from Thigpen and kicking to Chris Williams, who turned out to be pretty good too. But Thigpen was far and away better. He was so strong, he’d break tackles. He can still play, but his first few years, I’m telling you he was a beast.

“Then the two that we’ve got still (returning), Chris Rainey and Brandon Banks, they’re up there as well.” 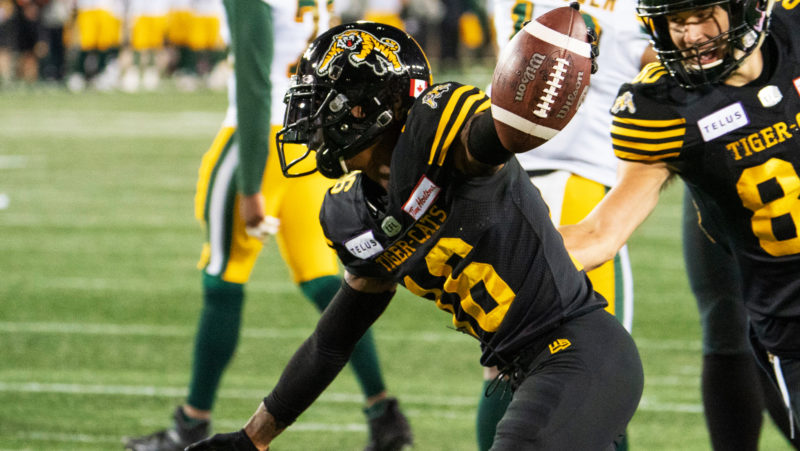 There’s more to Brandon Banks’ game than just speed. Riders head coach Craig Dickenson says Banks is a smart football player that could succeed at just about any spot on the field (Photo: The Canadian Press)

Banks is an intriguing name because he’s done so much so very well since landing in Hamilton in 2013. He first made a splash as a returner, then evolved into an elite receiver in the latter part of the decade. In his MOP-winning season in 2019, Banks mastered both the return and the receiver spot, becoming an end zone threat whichever way he got the ball in his hands.

“Speedy’s for real. Here’s the thing about Speedy,” Dickenson said. “He’s fast as hell, that’s true, but the thing you forget is he’s stronger than you think. He breaks tackles and he’s got tremendous vision and the ability to set a block up.

“He can slow down to allow his guy to get into position and speed up. He can lean one way to get the defender to lean that way and cut it back knowing that his blocker now has a good angle.

When your coaching career stretches into its 25th year as it does for Dickenson, it’s hard to list off your favourites without going further back into your own personal football vault. Here are a few of the players that played special teams prior to 2010 that Dickenson loved coaching.

He had a ton of praise for running back Wes Cates, who only spent the 2006 season in Calgary behind Joffrey Reynolds, but had the perfect skill set to be a great special teamer.

Dickenson never coached Bashir Levingston, but loved watching the former Argo (2002 to 2007) race all over the field.

His three favourite cover guys were Brandon Browner in Calgary, former Lion and Ticat Jamal Johnson and one player that’s eligible in the all-decade voting, in Deon Lacey. Dickenson coached Lacey in Edmonton and after he’d spent a few years in the NFL, the Riders signed him again this winter.

“Deon Lacey in Edmonton those few years I had him he was almost unblockable on kickoff,” Dickenson said.

“He had the ability to avoid people, he’d get to the football like very few others. I think that’s the reason he signed in the NFL and played a few years down there.”

On punters, Dickenson loved watching Sean Flemming play in Edmonton and gave a nod to a Noel Prefontaine, calling him very crafty.

“He had the ability to kick it away from the returner. He would kick this knuckleball you couldn’t field. If you got a little lazy and weren’t covering down he could do a quick snap and throw the ball. He was a quarterback back there playing punter,” he laughed.