TORONTO — The spotlight of the CFL archives fell upon the 1996 Toronto Argonauts this week as Doug Flutie, Paul Masotti and group of former teammates gathered over Zoom to re-watch the 84th Grey Cup.  The virtual gathering was a part of the latest installment of Remote Reunion driven by Kubota.

After a dreadful four-win campaign the year before everything seemed to fall right into place for the 1996 Argos.  A hall of fame coach, Don Matthews, hopped aboard and brought with him a captain in Flutie.  Together, they retooled an offence that to this day, remains one of the most productive in CFL history.  Add in a ferocious, and often underappreciated defence, and a special teams unit led by return speedster Jimmy ‘The Jet’ Cunningham and kicker Mike Vanderjagt, and this team steamrolled through the CFL for two consecutive seasons.  In those two magical years, Flutie, Pinball Clemons and co. went a combined 30-6 and won back-to-back Cups.

This team, along with the ’97 team are already considered one of, if not the, best squads ever assembled and it has the numbers to back up the moniker. 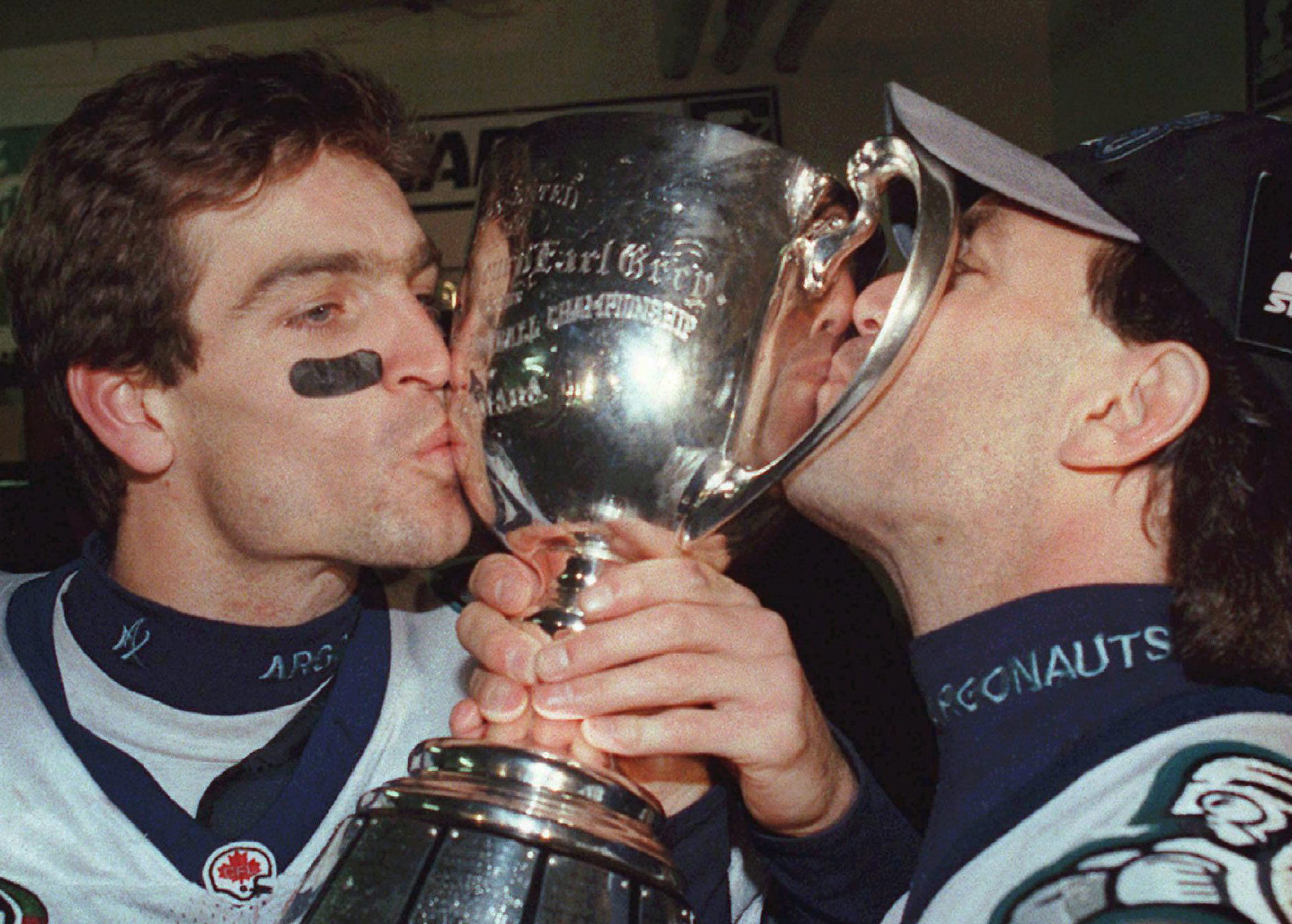 Doug Flutie and Paul Masotti plant one on the Grey Cup after the Argos defeated Edmonton in 1996 (CP).

Turning the Boat Around: The Argos set a franchise record with 15 regular season wins in 1996 (they would match it a year later, going 15-3 both years). That’s tied for the longest two-season win total in CFL history (Calgary did so on two different occasions in the ‘90s). Toronto’s 11-win increase from 1995 to 1996 was the biggest turnaround in CFL history.

Home dominance: The Argos had a 17-game unbeaten streak at home between 1996 and 1997, tied for the fourth longest streak in history.

Flutie Magic: Doug Flutie’s 5,720 passing yards in 1996 remain a franchise record. He was named MOP for that season and in 1997. Flutie was named Grey Cup MVP. Mike Vanderjagt was named MVC. Vanderjagt account for 19 points including 5 field goals, tied for 6th all-time in a Grey Cup.

Robert Romped: In his first season with the Argos, Robert Drummond took over the starting tailback spot and rumbled for a league-leading 17 touchdowns and 1,733 yards from scrimmage.

Pinball Wizard: Clemons was forced to play a new position with the emergence of Drummond.  In classic Pinball fashion, he excelled almost immediately.  His 116 receptions remains the eighth highest total in league history. He would break his own mark however one year later.

The Jet Flies: Cunningham, who was used both on special teams and at slotback, sprinted to the league lead in all-purpose yards with 2,838.  For good measure, Clemons finished behind him (2,626).

No Where to Go: As detailed in Don’Landry’s column on CFL.ca this week, the 1996 Argos topped the charts in pretty well all of the key categories; Only 18 points given up per game, a league best. First in rush defence, at 92 yards per. First in pass defence, and it wasn’t close. The Argos held opposition passing to 3,721 yards in 2018 (207 yards per game) and the next best unit was Hamilton’s, which gave up almost 1,000 yards more. They forced more turnovers than the rest (65). Led the league in sacks (49). With 29 interceptions, only Hamilton’s 30 was a better number. 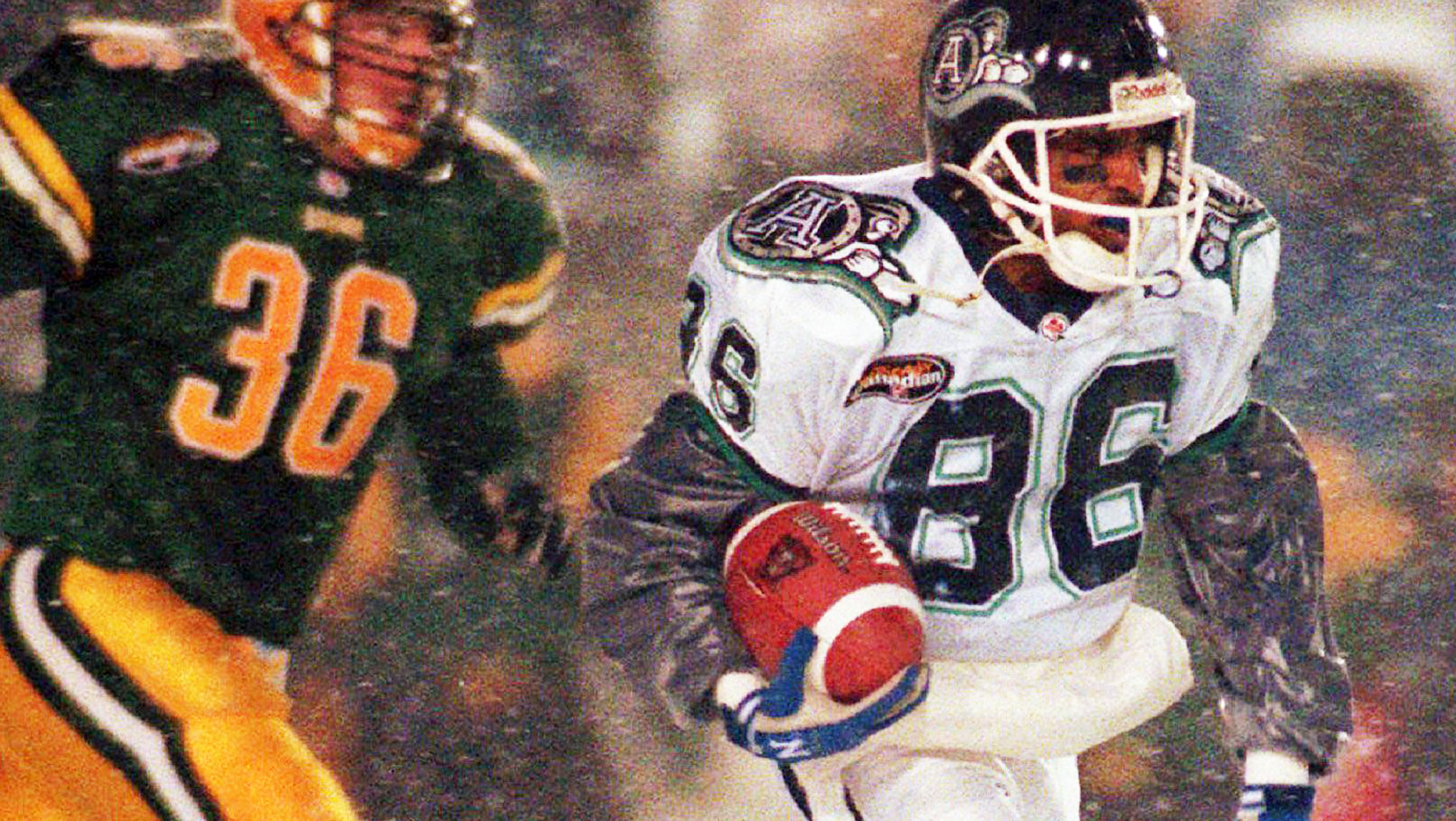 Jimmy ‘The Jet’ Cunningham sees daylight as he heads 80-yards for a punt return touchdown in the 1996 Grey Cup (CP).

Stuffing the stats sheet is one thing but coming up with huge plays in huge moments is another.  Massive plays in the Grey Cup are well-documented — and we will indeed get to that — but the Argos established how clutch they were very early in the season.

Doug’s Debut: Flutie put the team on his back basically from Day 1, engineering a storybook touchdown drive to give the Argos the win in Week 1 in Montreal.  After driving the length of the field and with just 25 seconds remaining, Flutie and the Argos scrimmage from the Montreal 6-yard line.  Flutie dropped back, retreated 17 yards to escape the pass rush and delivered a TD strike to Paul Masotti in the back corner of the end zone to earn a come-from-behind win on the road.

Seal The Deal: Week 7 saw the Argos host the team that they would eventually meet in the Grey Cup.  Up by a field goal and on a play that is strikingly similar to his play in the big game, Smith picked off a tipped Danny McManus pass with 48 seconds remaining in the game to preserve a win and keep a six-game winning streak alive.

Masotti’s Monster Catch: Stuck in the shadow of their own goalposts and down a touchdown to Calgary, Flutie stepped into a pass down the near sideline to Masotti who reeled in a perfect over-the-shoulder toss and took it 97 yards for a major.  The touchdown confirmed a 23-22 win by the Argos as Flutie got the best of his former Stampeders teammates in their first meeting since his departure to Toronto.

Pinball Sets the Tone: The 1996 Eastern Final was heralded as a battle of two powerhouses but by the time the first play of the game was completed, the game was essentially over.  Clemons took the opening kickoff back for a touchdown, sending SkyDome into a frenzy and jump-starting a 43-7 win.

The Jet Does it Again: Second only to the miraculous catch by Eddie Brown, the signature moment of the 1996 Grey Cup is the return TD by Cunningham.  With the teams trading leads and heavy snow falling, the elusive playmaker fielded a punt, reversed course, found the only shoveled lane way down the field and scored an 80-yard major to restore the Argos lead.

Smith Cements the Win: Up one score and with under two minutes remaining in the ’96 championship, Smith stuck with a pass from McManus which bounced off a receiver and into the his hands, racing untouched for a touchdown that sealed the Grey Cup win for the Boatmen. 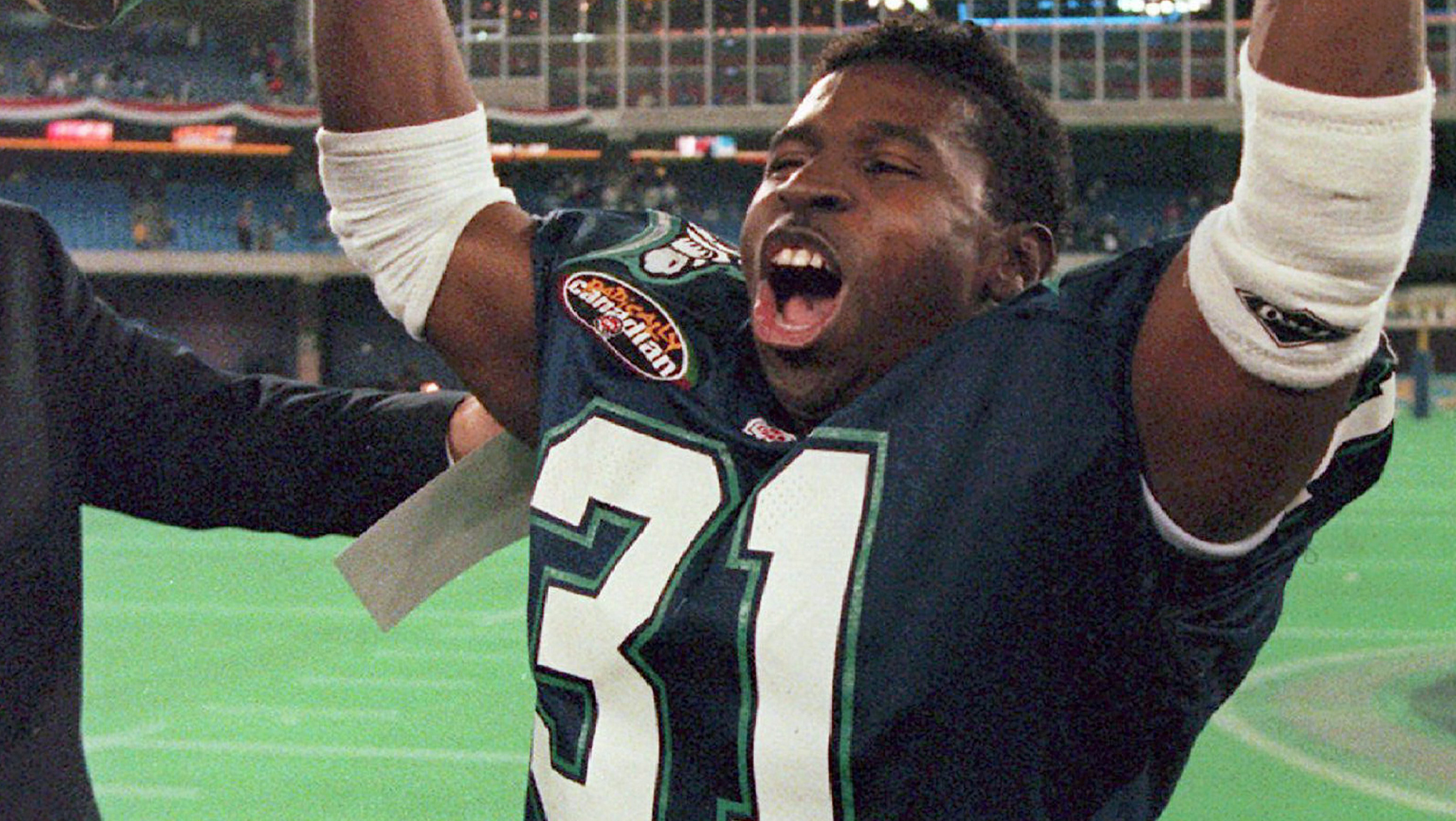 Michael “Pinball” Clemons celebrates after scoring the game-winning touchdown in the 1997 Eastern Final vs. the Montreal Alouettes (CP).

Although the Grey Cup in ’96 was more entertaining, you could argue that the 1997 Argos squad was even better.  The roster added future Hall of Famer ‘Mookie’ Mitchell and veterans continued to make huge plays at huge times.

Clemons topped his performance in the 1996 Eastern Final with a play for the ages a year later.  Stuck in a  30-30 gridlock with the Alouettes, Pinball found a spot in the middle of the field, caught a strike from Flutie with 40 seconds left, sheds two would-be tacklers and sprints to the endzone to send the Argos to the Grey Cup.

Smith also one-upped himself in the big game, taking the opening kickoff of the second half to the house.  With the Argos looking to break open a three-score lead, Smith fielded the kick, faked a reverse to Clemons, and took himself down the sidelines for a touchdown that would essentially etch the Argos on the Cup in 1997.