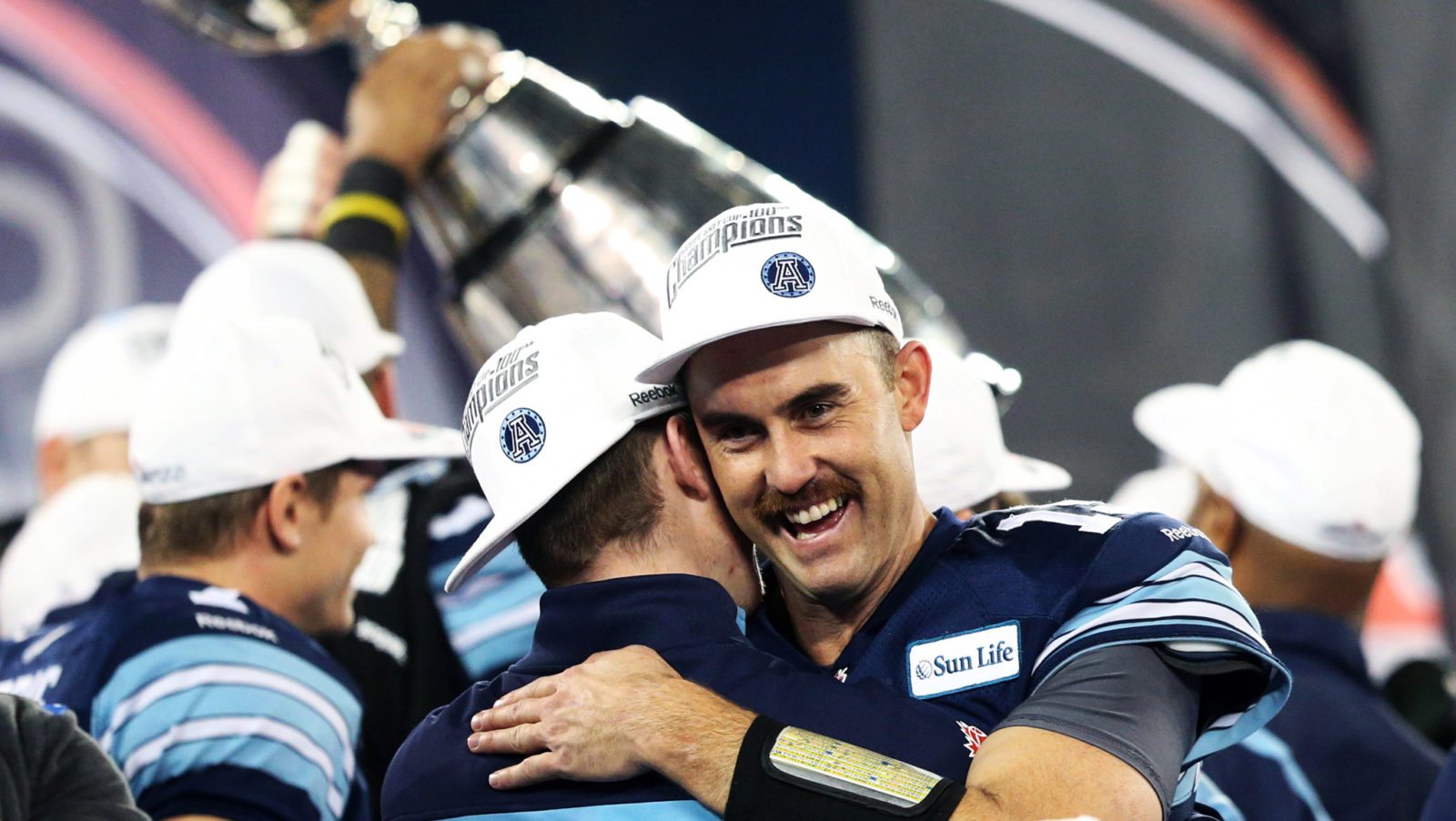 It’s the highest profile position in professional sports, and voting on quarterbacks for the CFL All-Decade Team presented by LeoVegas opens next week. The last ten years saw a ton of transition at the position, as future Hall of Famers Ricky Ray and Henry Burris gave way to future inductees like Bo Levi Mitchell and Mike Reilly.

To help you make a decision on your quarterback of the decade, this week’s column is looking at a few defining moments from the last ten years.

» CFL to honour the best of the last decade
» Vote Now: Special Teams
» Full list of nominees at each position
» ADT Voting schedule

In his first year as a starter, Mitchell helmed Calgary to a 15-3 regular season and a dismantling of Edmonton in the Western Final. Already blessed with the swagger and confidence required for a successful quarterback, Mitchell had a chance to back it up in his first Grey Cup appearance. He did just that in the first of many moments that would make him a frontrunner for quarterback of the decade.

In just his third professional season, and at the age of 24, Mitchell was named Grey Cup Most Valuable Player after going 25-for-34 with 334 yards en route to a 20-16 victory over Hamilton. While many will remember the 102nd Grey Cup for Brandon Banks’s called back touchdown late in the fourth quarter, it should also be remembered as the cementing of Mitchell’s arrival. Two Most Outstanding Player awards and three more Grey Cup appearances later, Mitchell also proved he has plenty of staying power.

The 2011 season really was all about Lulay in so many ways. Things didn’t start well in his first full year as BC’s starter. The Lions opened the season 0-5 and 1-6 before rattling off wins in ten of their final 11 games that season. Along the way, Lulay turned into an elite quarterback, which was underlined by being named the 2011 Outstanding Player.

After beating Edmonton in the Western Final, the Lions had the rare opportunity to play for a Grey Cup at home. Lulay threw for 320 yards and two touchdowns and was named Grey Cup MVP in a 34-23 BC win over Winnipeg to finish off a ridiculous 12-1 run to end the year. Lulay battled injuries for a number of seasons following, but Lions fans will always remember 2011 as one of the most dominant runs by a team, and a quarterback, in recent memory.

I’m not sure you could author a better closing chapter than what we saw from Burris in the final game of his Hall of Fame career. After regaining Ottawa’s starting job late in the season, Burris was back in the Grey Cup for a second straight year and a third time in four seasons. Burris had come up short in those two prior trips, one with the Tiger-Cats and one with the REDBLACKS, and he knew going in it would be his last shot.

Facing off against Calgary, the team he spent the bulk of his CFL career with, Burris sustained a knee injury pregame, adding even more to the legend. What followed was one of the single best quarterback performances in Grey Cup history: 461 passing yards, three passing touchdowns, and two more on the ground. Burris’s last pass to Ernest Jackson in overtime was the final score in a 39-33 win, which saw him take home easy Grey Cup MVP honours and his third title overall. Burris would retire a few months later and was elected to the Canadian Football Hall of Fame earlier this summer.

While it wasn’t in a Grey Cup game, what Harris did in Ottawa’s 46-27 win over Hamilton in the 2018 Eastern Final had to make this list. Harris, who began establishing himself as an elite quarterback in the latter stages of the decade, was missing one thing in his third season with the REDBLACKS: a defining playoff game. That was no longer the case after what Harris accomplished that afternoon at TD Place.

Harris set a new CFL record for touchdown passes in a playoff game as he finished with six to go along with 367 passing yards. Almost as bonkers as the six spot he put up was Harris’s completion rate that day: he threw just three incomplete passes while going 29-for-32 at 90.6%. Unfortunately, Harris and the REDBLACKS would lose to Calgary the following week in the Grey Cup, but that doesn’t change how incredible his performance was in the Eastern Final.

Ray was already a Hall of Fame quarterback as he entered what would be his final Grey Cup game against the Stampeders in 2017. But, just for a little icing on the cake, Ray had a few more tricks up his sleeve as he led the 9-9 Argonauts to a thrilling 27-24 comeback win over Calgary. Yes, Cassius Vaughn’s record-setting 109-yard fumble return touchdown might be the most memorable moment of Toronto’s win. But, Ray had two vintage moments of his own that proved to be vital.

The first came early in the second quarter when Ray and DeVier Posey connected on a Grey Cup record of their own: a 100-yard touchdown pass and run. But it was Ray’s final series of the game that I’ll remember just as fondly. With the game now tied at 24, Toronto took over at their own 40 with just over two minutes remaining. Much like he did in the Eastern Final one week prior, Ray converted on two clutch second downs and moved the Argos into field goal range. Lirim Hajrullahu booted the game winner and the Argos held on for Ray’s fourth Grey Cup ring.