They stood at midfield, at least 26 members of the 1999 Hamilton Tiger-Cats, encircled by the current edition, 20 years younger.

It was just over a year ago this past week that the ’99 Ticats had their 20th anniversary reunion. After safety-turned-head-coach Orlondo Steinauer’s practice ended, a generation’s worth of players in black and gold stood on the team’s logo and listened to the guys that were slightly older.

Alumni nights and team reunions are common in all sports, but there was something different about that meeting and that weekend. It was a cold, wet October morning and the current Ticats had a game the next day. Still, that lump of about 75 people stood at midfield in conversation for a good 30 minutes. The next night, Hamilton trounced Edmonton 42-12. Members of the 1999 team popped in and out of the 2019 team’s media availabilities after the game and celebrated the win with the players.

“It’s one of those memories that you’re making that you can’t put into words, almost,” Steinauer said of that weekend.

“We’re always talking about standing on the shoulders of those that came before us and studying history. You can either repeat it or not repeat it or both and 1999 was the last time we felt that euphoria of Hamilton (winning the Grey Cup). It was exciting. It was emotional.” 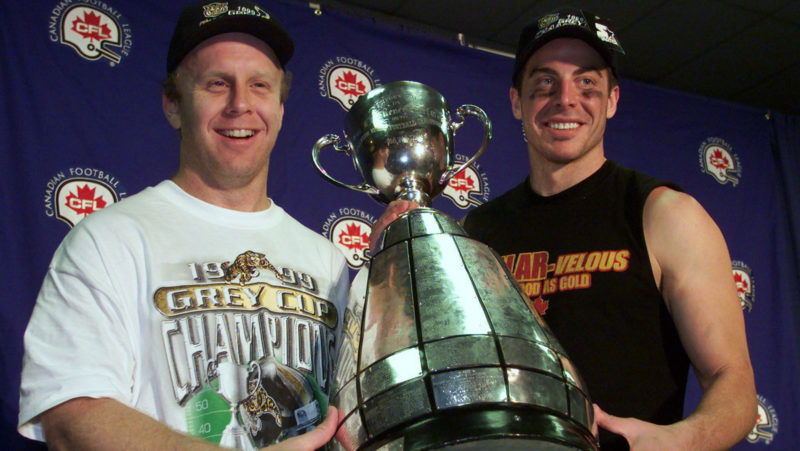 It’s also one of those moments that even if you thought you fully appreciated while it was happening, that takes on more meaning in 2020. The simplest components of that reunion — the game being played and the crowd at Tim Hortons Field, the flights that brought the alumni together, the close quarters that they came together in over the two days, the shared meals and the socializing before, during and after the game — are all impossible now during a pandemic.

Talking about things that happened last year can feel like it happened a lifetime ago. Steinauer hadn’t thought about the timing of the reunion, but it sounds like it falls into that camp when he looks back on it.

“I feel extremely fortunate that we were able to get that in last year and celebrate that,” he said.

“Everybody deserved it, all the players, the 2019 team to the ones from 1999. The cool thing was the majority of those people in ’99 were on the team that lost in ’98, so they’ve felt as ABC’s Wide World of Sports put it when you were growing up, they felt the thrill of victory and also the agony of defeat.”

Mike Morreale, a receiver on that ’99 team and a native Hamiltonian, said he felt lucky they were able to do the reunion at the 20-year mark and not later in everyone’s lives.

“Not just as it relates to today, in what we’re going through with COVID but so often when you have these reunions, they’re 25, 30, 40-years later and guys aren’t the same,” he said.

“It’s nice to see that we were able to walk out there, run out there, jog out there in front of the fans and they kind of still can look back and remember us as we were.

“From a fan perspective it was fantastic and from a personal perspective of being able to be actually socializing with your best friends that you haven’t seen in so long…attempting to do it now or even looking to do it in future years from the standpoint of now, it’s who knows? That was just an awesome experience and I look back and it flew by and I wish I could have relished it even more.”

As Steinauer mentioned, the key to the 1999 Ticats’ team winning was that the majority of its players had tasted defeat in the Grey Cup the year prior to the Calgary Stampeders. That sour taste stayed in their mouths the entire year and they were able to rinse it out in their second meeting with the Stamps. Given how the 2019 Ticats’ season ended, watching the Winnipeg Blue Bombers hoist the Grey Cup, you wonder if that same energy will follow the Ticats into training camp for the 2021 season.

“There’s nothing worse than losing a Grey Cup,” Morreale said.

“You can lose the 18 games in a season and there’s nothing worse than losing the Grey Cup, it just doesn’t go away. You replay that in your head over and over. We had a chance to go right back and rectify it.

“The Cats unfortunately have this time off to stew about it. My hope is that under the same leadership and with the majority of the same players, they’ll be more than a contender. The way that they operate, the way they believe and they work together as a team, I got that same sense of family (as with the 1999 team). I do believe that it’s definitely a team that can go back and correct the wrongs.”

As the link between the 1999 team and the present-day Ticats, Steinauer took a special pride in that reunion weekend last October. He rattles off personal highlights from it, like how the current players sought out jerseys with their numbers and their alumni’s name on the back, or how the alumni were together and still FaceTiming members of the team that weren’t able to make the trip, just to include them. That night when they beat Edmonton, the Ticats put Rob Hitchcock’s name on their wall of honour. Steinauer’s team scored 42 points, matching the number of the enshrined linebacker and safety.

“To relive that ’99 team, I know it brought memories back. They were proud. It was a great token by the organization, by Scott Mitchell and Bob Young to accommodate so many people and it was that important to them. It just tells you a little bit about the organization and the commitment that we have from the top, which ultimately trickles down.”

It was special then and now, when we’re so limited in what we can do, it feels even more powerful.