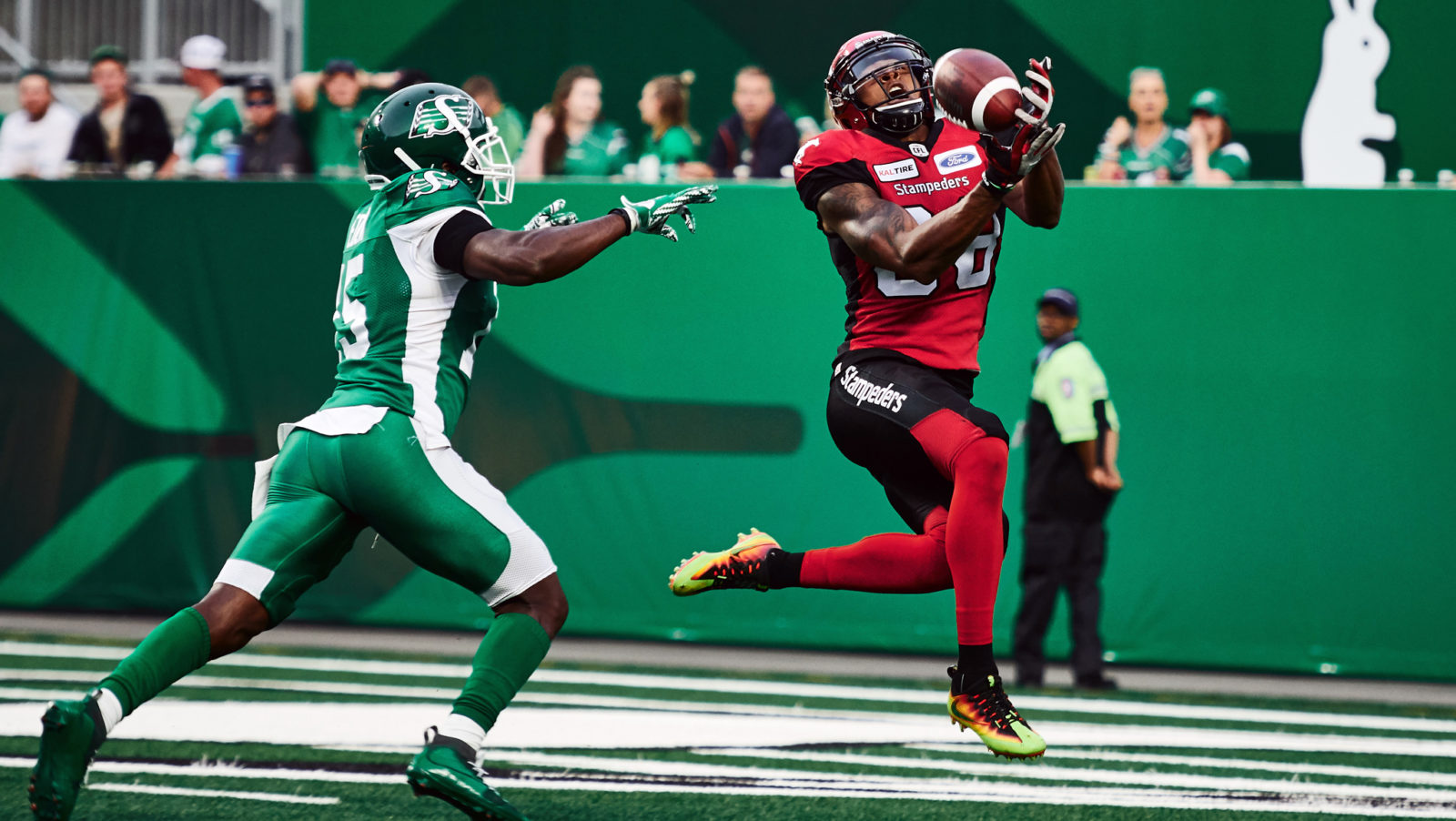 We don’t know exactly what rosters will look like when the CFL returns for the 2021 season, but we can assume they’ll look pretty similar to how they’re assembled now. While we have more than six months until we can dive into next season, I thought I’d shine the spotlight on a few players to keep a watchful eye on when things resume.

RELATED
» Hervey steps down as Lions’ GM
» Lewis on 2000s Stampeders: ‘We just fed off each other’
» CFL.ca writers’ guide to finalizing your All-Decade Team vote 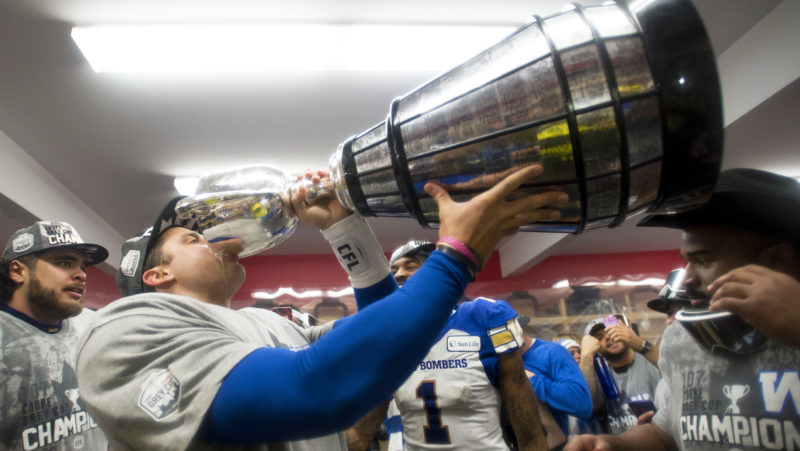 Zach Collaros’ wild 2019 season ended with him hoisting the Grey Cup with the Bombers, his third team of the year and his home for the foreseeable future (Photo: CFL.ca)

Sure, you can tell me it’s cliché to choose a quarterback for stuff like this. But is there a more fascinating quarterback to track next season than  Zach Collaros? We’re talking about a guy who put together perhaps the most epic, out-of-nowhere, four-game stretch we’ve ever seen to finish off 2019. Those four games, including a win over Hamilton in the 107th Grey Cup, have changed everything for Collaros.

Think of how things had gone for Collaros prior to October 2019. He had lost his starting job in Hamilton, been traded to Saskatchewan and delivered mediocre results. Then on his first snap of last season, Collaros sustained a concussion and spent months recovering. But upon landing in Winnipeg prior to the trade deadline, Collaros saw an opportunity staring him square in the face and seized it.

The Bombers anointed Collaros as their guy earlier this year when they signed him to an extension. At the same time, Winnipeg released Matt Nichols to pursue other opportunities and Chris Streveler departed for the NFL. So now it’s Collaros’s gig and I think he’s in a good spot to succeed. Yes, the sample size with the Blue Bombers is small, but let’s not discount how crucial a year away from football could be for Collaros. A rest prior to this new opportunity could end up doing wonders.

When the 2021 season starts, it’s going to be tough to find someone more eager than Kamar Jorden. When the next campaign kicks off, it will end a stretch of almost three years without football for him. Yes, I know he technically suited up for last year’s West Division Semifinal against Winnipeg, but if you talk to anyone in Calgary they’ll tell you that was a desperation play. Jorden may have been cleared to play, but wasn’t anywhere near back up to speed. You can bet he will be come the spring.

It’s been a while since we’ve seen Jorden at 100 per cent, so let’s do a little refresh. When he tore his ACL in September 2018, Jorden was making a strong case as the CFL’s best receiver. He was at 944 yards and six touchdowns in 10 appearances and was averaging more than 165 yards in the three games heading into Week 12, when he sustained his devastating knee injury. Jorden had officially arrived and then a major injury derailed everything.

Now, with ample time to get his knee and body back to full strenth, I’m fascinated to see if Jorden can return to that same form in 2021. This guy had focused all of his mental energy into the start of a 2020 season that never materialized. Will a one-year delay on Jorden’s long awaited return to the field work for or against him? I can’t wait to find out. 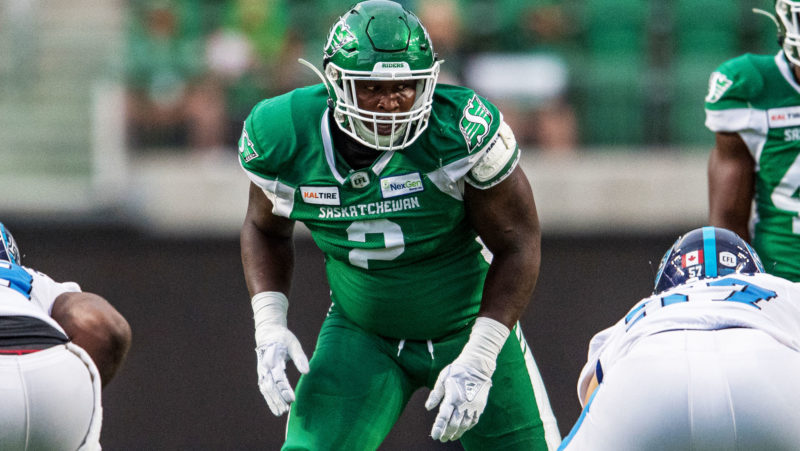 After a down year by his standards in Saskatchewan, Micah Johnson will look to get back to his sack-happy ways with the BC Lions (Photo: Riderville.com)

Micah Johnson’s signing with the Lions in free agency flew way under the radar, but it shouldn’t have. I understand why it did, though. After six years with Calgary, Johnson signed a one-year deal with Saskatchewan for the 2019 season, but things never seemed to click. All of a sudden the most dominant interior lineman in the game looked somewhat ordinary, at least relative to his high standards.

But I think a number of factors could add up for a massive bounce back year for Johnson in 2021: A new opportunity, something to prove, and a year off. The change of scenery for Johnson comes with a familiar face in Rick Campbell; the new head coach of the Lions was Johnson’s first defensive coordinator with the Stamps. There’s a good chance Johnson will enter next season with a chip on his shoulder with people questioning if he’s taken a step back. And at 32 with a lot of hard miles, a year away from the grind of a CFL season could do Johnson a lot of good.

Let’s not forget Johnson isn’t that far removed from a stretch of three years in Calgary (2016-2018) where he averaged 10 sacks a season. Johnson is highly athletic and possesses elite strength, which has allowed him to dominate at tackle despite being “undersized” by some definitions. I don’t know exactly how things are going to play out with the Lions, but Johnson is too good to sleep on in 2021.

Speaking of long layoffs, let’s say hello to Otha Foster. When he suits back up for the Riders next season, it will have been two full years away from football for Foster, and not because of injury. Foster voluntarily stepped away from the game for the 2019 season before signing back with the Riders in free agency, where he played in 2016 and 2017.

Foster is intriguing for numerous reasons, and not just because he’ll have had two years away. First off, he’s returning to the league with big shoes to fill. Foster is earmarked to step into the cover linebacker slot vacated by Derrick Moncrief, who joined the L.A. Rams in August. That’s no easy task, though, as Moncrief had developed into one of the best at his position prior to departing.

Luckily, Foster has a pretty solid resume himself. He was a CFL All-Star with the Lions in 2018 and put together his best statistical season in 2016, his only full year with Saskatchewan. That season saw Foster finish with 71 defensive tackles, three sacks, an interception, and a forced fumble. With a couple years away from live action, Foster is one of the most intriguing players to watch for next season. 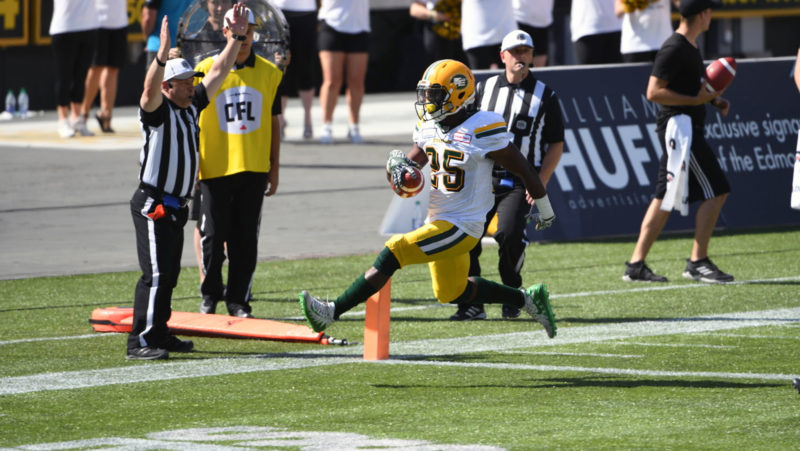 Shaq Cooper has shown he can produce as a CFL running back. In 2021, he’ll be poised to do it on a full-time basis (Photo: Edmonton Football Team)

Shaq Cooper had been waiting for his opportunity on top of Edmonton’s depth chart and it looked like 2020 was finally going to be his big break. As it turns out, he’ll have to wait another year, but 2021 shapes up really well for the promising tailback. In fact, what Cooper looks to be capable of is a huge reason why Edmonton was comfortable enough to move on from C.J. Gable after parts of three solid seasons.

With Gable no longer in the fold, the door is wide open for Cooper to take the reins. Everything we’ve seen from him to this point suggests he’ll be able to do that very effectively. Look at 2018, for instance. In games where Cooper was able to get double digit touches on the ground, he averaged more than five yards a carry. When he has been used extensively (15 carries or more), he’s been even better.

Despite only having three CFL games on his resume with 15 or more carries (one in 2018, two in 2019), Cooper has made the most of them. In those three outings, he’s averaged 108 yards on the ground and has scored two touchdowns. Yes, it’s a small sample size, but he’ll be used like that a whole lot more next season. Let’s see if Cooper can be as productive.