As you scroll through the list of head coaches for the All-Decade Team presented by LeoVegas, there may not be a lot of room for debate.

Statistically, the tandem of John Hufnagel and Dave Dickenson have dominated the decade, with Hufnagel going 79-29 as a head coach, before Dickenson took the reins in Calgary and compiled a 53-17-2 record.

With the voting window soon closing and possibly a bias toward the team I was around for a significant portion of the last decade, I thought back to what we saw in Edmonton in 2015 and wondered what might have been.

Chris Jones is tied with Dickenson for third in total wins — Winnipeg’s Mike O’Shea sits second behind Hufnagel with 56 — and while he put in more time as a head coach in Saskatchewan than he did Edmonton, those two years were wildly successful.

» CFL to honour the best of the last decade
» VOTE NOW for all spots
» Full list of nominees at each position
» ADT Voting schedule
» Landry: Close but no All-Decade cigar for some CFL greats 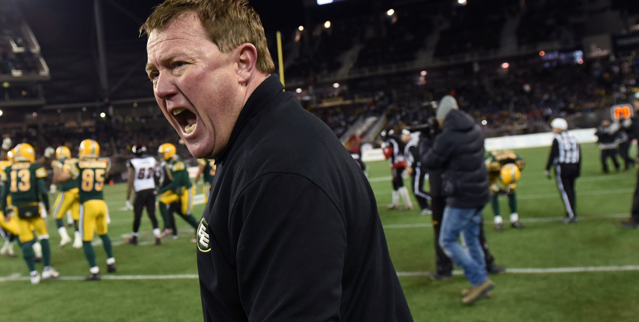 In two short seasons in Edmonton, Chris Jones brought a culture change and a Grey Cup to a franchise that hadn’t won one in 10 years (Photo: CFL.ca)

Jones took over an Edmonton team that won just four games in 2014. In his first year, Edmonton went 12-6 and lost in the West Final to Hufnagel and the Stamps, who were on their way to a Grey Cup win. Jones led his team over the mountain in his second season. Edmonton was 14-4 in 2015 and rolled over the Stamps at Commonwealth Stadium to punch a ticket to the Grey Cup game, where they topped Ottawa for the city’s first Grey Cup win since 2005.

In a huge testament to that team, it won with a lot going on behind the scenes. Word got out that week that Jones was looking at taking his entire staff to the Riders after the 2015 season. The team pushed that aside and got the job done before the rumours were confirmed. Jones and the majority of his staff became Riders just over a week after winning the Grey Cup.

It was together for a short time, but it was in many respects the perfect team. GM Ed Hervey had hired Jones and had many pieces in place for a dominant team, starting with quarterback Mike Reilly. He had a litany of potent receivers at his disposal and was protected by an offensive line that turned itself into one of the league’s best after years of criticism. The heartbeat of any Jones team, though, is its defence and it was loaded.

There were quarterback-seeking missiles on the d-line, including Odell Willis, Willie Jefferson, Marcus Howard and Almondo Sewell. Dexter McCoil and J.C. Sherritt headlined the linebacking corps. Pat Watkins, Otha Foster, Aaron Grymes and John Ojo were just a few DBs that were looking for their next interceptions and knockdowns.

On special teams, Kendial Lawrence was a constant return touchdown threat and could fill in at RB or receiver when needed. Grant Shaw and Sean Whyte handled the kicking game and they worked with arguably the top special teams coach in the league, in Craig Dickenson. 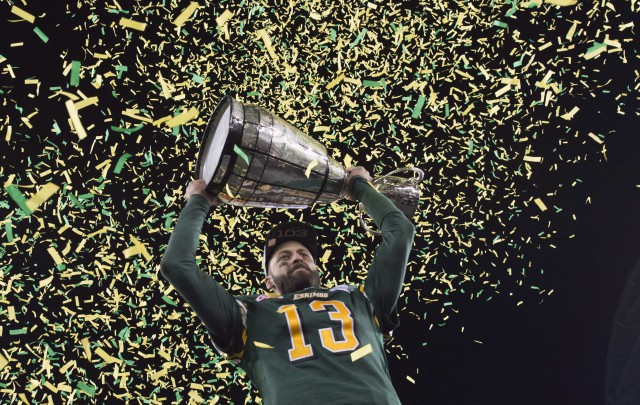 When Mike Reilly lifted the Grey Cup in 2015, the pieces were in place for prolonged success. Chris Jones took most of his staff to Saskatchewan with him days after the win (Photo: THE CANADIAN PRESS/Nathan Denette)

From the high-end, MOP-worthy talent in Reilly and Adarius Bowman, to a future defensive player of the year in Jefferson, Edmonton had quickly built itself up a team that was dominant in the present and poised to be great for years to come. Hervey did an exceptional job of finding young talent — McCoil and Derel Walker won CFL rookie of the year honours in 2014 and 2015, respectively — and Jones and his staff put their stamp on the day-to-day workings of the team. In two short years Edmonton had won a championship and seemed to be just settling into its greatness.

Of course, no team is immuned to change. Coaches pursue their next opportunities the same way that players do, either within the CFL or for NFL opportunities. Jones wanted to become a GM and had put himself on that path in the decade-plus he’d been in the league before he took his first head coaching job in Edmonton. Fans in Edmonton could be understandably hurt by seeing its championship-winning roster not stay intact, but pro sports across the board have changed in the last generation. Dynasties may be fading into the past.

What might it have looked like though, if Jones had said he’d wait a little longer and see what could be squeezed out of that great group of players in Edmonton? We know that Calgary stayed consistently dominant and that Winnipeg began its climb in 2015, after acquiring Matt Nichols from Edmonton. We also know that the REDBLACKS were on the way up and had a Grey Cup upset up their sleeves the following year.

The five-in-a-row Edmonton team doesn’t seem like something that will be duplicated in this age. The 2009 and 2010 Montreal Alouettes are the last back-to-back Grey Cup winners that the CFL has seen. Had they all stayed in Edmonton with what was in place, knowing that the organization was capable of replacing players lost to free agency or retirement, how much more success could we have seen? To me, there was a world of possibilities and Jones certainly would have a few more wins over the last decade before he pursued his next opportunity, with the Cleveland Browns in the NFL.