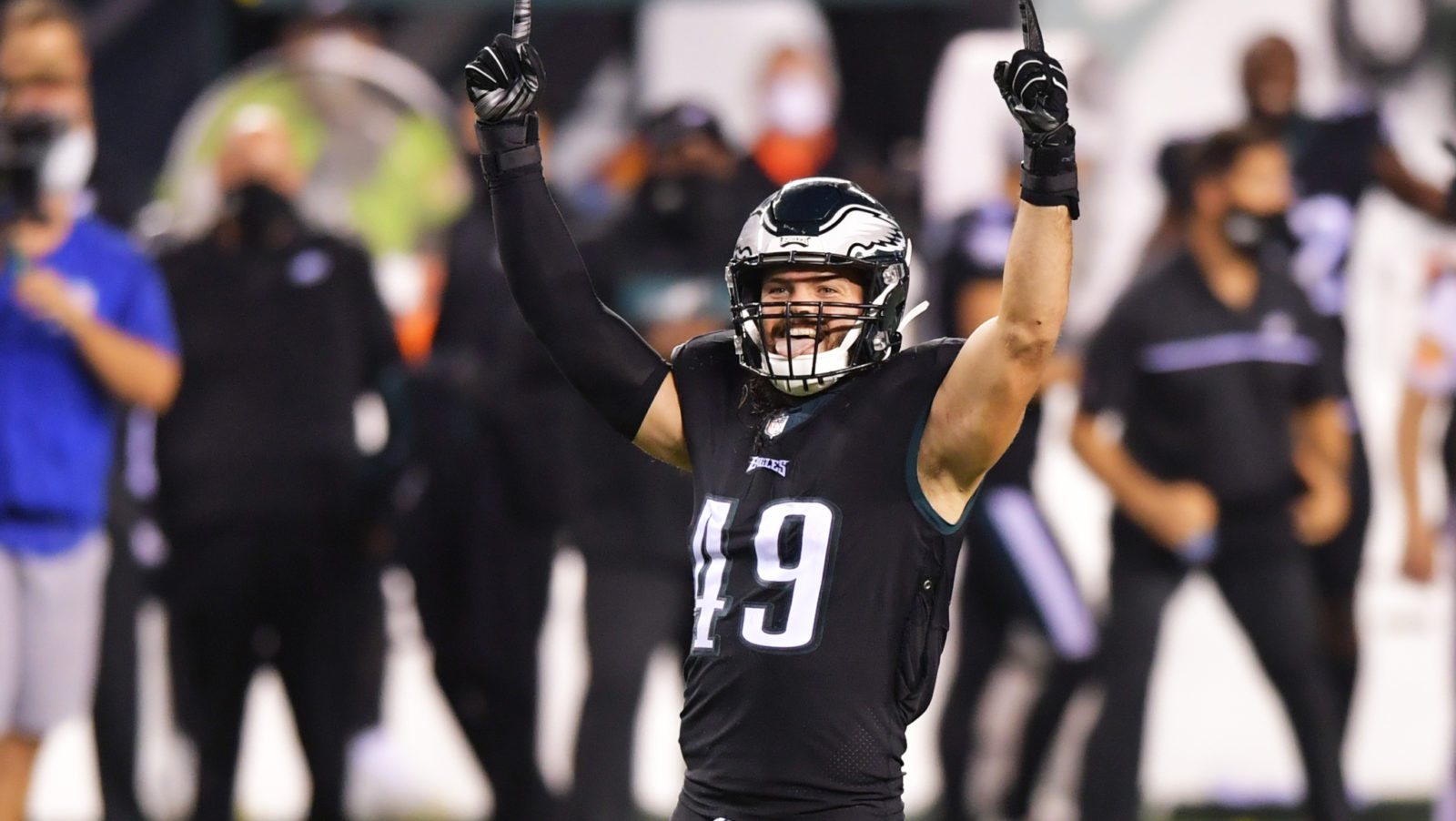 They know how the linebacker flew around the gridiron for three seasons as a member of the Calgary Stampeders. They know that he was named the CFL’s Most Outstanding Defensive Player in 2017 . And they know that he helped the Stamps win a Grey Cup in 2018.

The rest of the world got to know exactly who Singleton is over the last month.

The 26-year-old scored his first NFL pick-six earlier in October and the play went viral over social media. Then last week, Singleton ran full speed into a running back and crashed him right into a QB. Another play that went viral.

So which one brought in more attention for the up-and-coming NFL linebacker?

“It would definitely be the pick-six on Sunday night,” Singleton told Donnovan Bennett on last week’s episode of The Waggle podcast. “Just I think more that, (it was) a bigger audience on Sunday night. But yes, the hit was funny, for obviously the play not really meaning anything because it wasn’t a sack, nothing really came of it more than just quarterback hurry and just the next play.

“That one, it definitely got a lot of love. It’s funny, some plays I just think it’s just a play that will kind of go by and then it becomes a big thing. It’s pretty funny and cool at the same time.”

RELATED
» Campbell on Lions’ front office: ‘We have a lot of pieces of the puzzle in place’
» MMQB:Bo Levi Mitchell looks to the future during CFL pause
» Vote now for the All-Decade Team presented by LeoVegas

Singleton has found himself on the field and playing more snaps over the last few weeks as some of his teammates have suffered injuries. Of course, no player wants to see his comrades hurt but as Singleton says, he has to have the next man up mentality and be ready for whenever he is called upon.

“Obviously throughout my career, it’s always been be ready to be the next man up and when it is your chance you know taking full advantage of that,” he said. “That’s just kind of how I think the guys on this team have taken it and we truly believe in that. You don’t want to be the guy that sets your team back. You want to be the guy that just goes in and you do as good or better than the starter in front of you.

“You always want to have that mindset even going into the week whether your own practice squad or you’re one rep away, you just always want to prepare like it’s going to be your time and then when it is you’ll be able to take full advantage.”

Singleton’s pick-six, just the second of his football career (the first he scored in college), was back in early October against the San Fransisco 49ers. The score would end up being the game-winner and was the play that put Singleton on the map around the NFL.

It was a special moment for the six-foot-two, 240-pounder but the moment that was even more special was sending the ball home to his older sister Ashley in Thousand Oaks, California.

“It’s funny too because, for me, to be able to keep ball in Philadelphia is kind of tough in my apartment. It might just get tossed to the side and thrown on the floor,” he said.

“So to be able to send it home and have my family, and obviously especially my sister, passionately care about it. They see it as a truly prized possession that I think I overlook sometimes just because we get so focused on the next week. To be able to give that to her and find out that she won’t let my dad take it out of the house yet to show people.. it’s some of those things that’s really cool that I don’t ever really think about. But it really means a lot.”

So far this season, Singleton has racked up 15 tackles, including an eight-tackle performance against the Baltimore Ravens in Week 6, to go along with his interception returned for a touchdown.

Even though he’s moved on from the CFL and has found success in the NFL, Singleton’s heart still very much remains north of the border.