For 26 years, one of the greatest single-game accomplishments in CFL history had gone largely unseen.

On July 14, 1994, Matt Dunigan made pro football history when he threw for an astonishing 713 yards in a game, carrying his Winnipeg Blue Bombers to a 50-35 win over an Edmonton team that had beaten them in the Grey Cup in 1993.

In the immediacy of the game, the sports world took notice. Dunigan recalls Sports Illustrated writing something about the feat and for the weeks after that early season win, it was the conversation that followed the Blue Bombers everywhere they went.

But unless you were one of the fans at CanadInns Stadium in Winnipeg, you didn’t get to see Dunigan rattle off touchdown passes of 88, 55, 45, 35 and 33 yards. The league’s television deal wasn’t what it is today, where TSN has exclusive broadcast rights and the airing of every single regular-season and playoff game is a given.

RELATED
»Watch more Remote Reunion episodes
» O’Leary: How the 2009 Alouettes dipped into the fountain of youth
» CFL in 40 presented by CDIC: 2009 Eastern Semi-Final 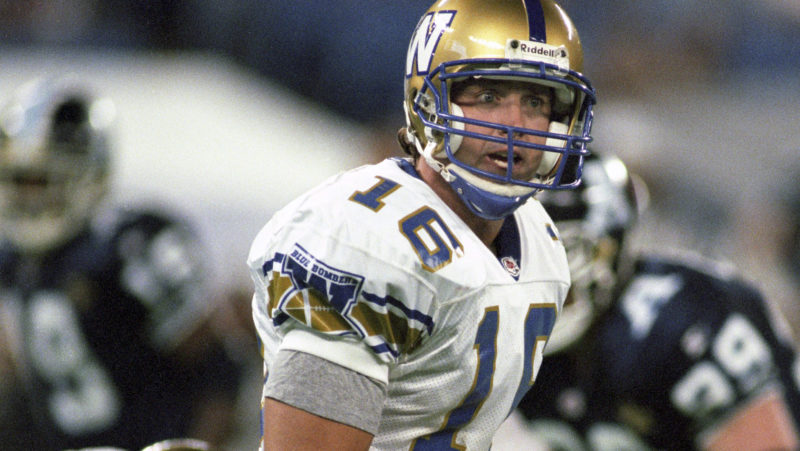 After an injury made him a spectator in Winnipeg’s 1993 Grey Cup loss to Edmonton, Dunigan was very motivated to give Edmonton his best when they met in Week 2 of the ’94 season (Photo: The Canadian Press)

The Edmonton-Winnipeg meeting in Week 2 of the season went un-aired. For 26 years, fans and even Dunigan himself have relied on the boxscore, highlights and written articles to preserve that one monstrous night.

“I’ve seen clips before, bits and pieces,” he said from his home in Destin, Fla.

“Of course, everybody knows that that game wasn’t televised, which is mind boggling. It’s a Grey Cup rematch, Week 2 of the following season. We had a point to prove, I think as a football team.”

We all know that it happened but all these years later, it almost feels like a folk tale that’s been passed along through a generation of football fans.

That changed this year.

With the help of Mark DeNobile at the Canadian Football Hall of Fame and a collaborative effort between some CFL and Bombers employees, some admittedly rough footage — but complete footage nonetheless — of that game has been uncovered. Dunigan, along with his former teammates Chris Walby, Miles Gorrell, David Wililams, Alfred Jackson and Bob Cameron were able to finally see it in its entirety and watched it as part of CFL.ca’s Remote Reunion series, driven by Kubota.

Adam Marshall, CFL.ca’s coordinator of video content, reached out to TSN looking for the game and found out they only had a limited highlight reel. Eventually, a call was made to DeNobile at the hall of fame in Hamilton. He dug around the hall’s archives and found a VHS copy of the in-stadium feed that aired on the big screen during the game.

Marshall had to convert the VHS tape to digital and then work to fill in the blanks. There is no play-by-play of the game, no graphics on the recording. That’s where Bluebombers.com’s Ed Tait came in. Tait, who had written the above-linked Dunigan story when he worked for the Winnipeg Free Press, shared the original stat sheets from the game. That let Marshall figure out where the game was and allowed him to set up the video with timestamps and the score, for the players to watch.

So often, you hear an athlete or a team in the wake of a monumental performance say that they’ll process it later, that they can’t remove themselves too much from the moment. With the players reunited to watch this game in its entirety, they were finally able to get the chance to do that.

“The train just keeps on moving,” Dunigan said of the players’ mentality in the moment.

“It just keeps on rolling and you don’t have time to reminisce, to think about what just happened. You’re just on to the next one. You make the corrections, you game plan for the next game and your focus is elsewhere.

“As time goes on, I think you do have the opportunity to reflect and then you get to see it in different aspects as time passes. It’s been a pretty unique process since ’94 to watch this memory struggle and move forward to stay alive.

It’s good because it was one of those magical nights and I’m not out there by myself. We’re a football team that had to regroup from the loss in the Grey Cup and the first regular-season game on the road (in 1994) to BC. Our focus was on the task at hand and that never changed.”

You can see in the video how Dunigan analyzes the tape and sees small mistakes, opportunities to have done even better than the 713 yards he threw. It’s a different generation of football, rife with opportunities for quarterbacks to air the ball out in a way that you don’t see as often anymore.

Dunigan lamented the absence of Mike Kelly on the conference call. Dunigan’s appreciation of his offensive coordinator at the time and a lifelong friend is obvious in our call. If you think of Dunigan and the Bombers’ offence as a symphony working in unison that night, Kelly was the conductor, piecing it all together.

Being in the moment and on to the next game back then, Dunigan said there wasn’t really time for the players to process that this historic game went largely unseen. Games fell through the broadcasting cracks back then, Dunigan said, and players just accepted it. Of course, now a key part of the CFL on TSN broadcast team since 1999, Dunigan’s living in a completely different football world than the one he played in.

“The TV agreements weren’t like they are now with TSN giving millions and millions of dollars every year to to broadcast their games and to be their partner,” he said. “It just wasn’t something we thought about. We were trying to win football games.”