Sinopoli on ending of ’15 Eastern Final: ‘It was pandemonium’

Sinopoli on ending of ’15 Eastern Final: ‘It was pandemonium’

It’s been five years but Brad Sinopoli can still remember it all.

The sights. The sounds. The feelings. Everything.

He remembers his REDBLACKS being up 28-21 with just over two minutes left in the fourth quarter of the Eastern Final. He remembers standing on the sideline watching Luke Tasker running his route towards the end zone. He also remembers thinking that Hamilton quarterback Jeremiah Masoli wasn’t going to find his receiver for the tying score.

“I remember being on the sideline being directly on the line where Tasker was running his corner route on. I had a unique perspective of it and I just remember thinking, ‘oh, the ball is too (far) left. He threw it too far to the sideline.’ It’s one of those things that split second he just kind of comes out of nowhere and makes the amazing catch.

“There’s not too many moments as a player that something happens and you’re just like, ‘oh wow.’ There’s nothing you can do and that was one of those moments. I just have this image in my mind of not really being able to see him but seeing him flash out of nowhere as I thought the ball was just going to hit the ground.”

Tasker hauled in the pass, an incredible diving touchdown, and along with Justin Medlock‘s completed convert, the Tabbies had tied things up. There was 1:34 seconds left on the clock. Henry Burris and his offence had a minute and a half to move down the field and try to re-take the lead.

As the offence prepared to take the field, there wasn’t much being said. There were a few defensive players trying to get the offence pumped up but for the most part, they already knew what they needed to do.

“That’s all you can do, just go out, listen to the plays and try to make some plays within the time that’s left,” said Sinopoli from his home in Ottawa on Wednesday, taking a minute to chat while his seven-month-old son was taking a nap. “I think in that moment you try to build it up bigger than what it is. Like, ‘oh, it’s this last-minute drive’ and all of this stuff. You tend to be playing a little more nervous and a little more on edge.”

“We had a bunch of veterans,” he continued. “We had Henry. We had a bunch of coaches that had been there before so I think it was just like any other drive. It just happened to be a last-minute drive, really.”

So they took to the field and hoped for the best.

On the first play of the drive, Burris’ pass was intended for Sinopoli but instead went in and out of the hands of Ticats’ defensive lineman Arnaud Gascon-Nadon.

“It’s weird. It was like a slow motion but then the turnaround is so quick,” Sinopoli said of the almost interception. “Looking back now, past those years, there’s been enough plays that when something almost goes catastrophically wrong, usually there’s a good play coming after it at some point.”

The REDBLACKS didn’t have to wait very long for something good to show up.

The very next play Ottawa was on second-and-25, after a 15-yard penalty moved them back. Cue the dramatics.

A high snap. A recovery. A throw. A catch. A touchdown.

It was a relatively routine play for the team; Sinopoli said they had run it many times that season. All they had to do was get out of the way and unless there are four defenders on Ellingson, the ball was going to him and they all would just hope he comes down with the catch.

“He was really, really good at adjusting to the ball in the air and having great body control, which is harder than what it looks,” said Sinopoli. “I remember I was in the flat and I looked back at Hank fumbling the ball and Hank is trying to grab it and I’m like, ‘oh my God, what is going on? I’m over here in the flat, you can bail that over here.’ And he just chucks it up.” 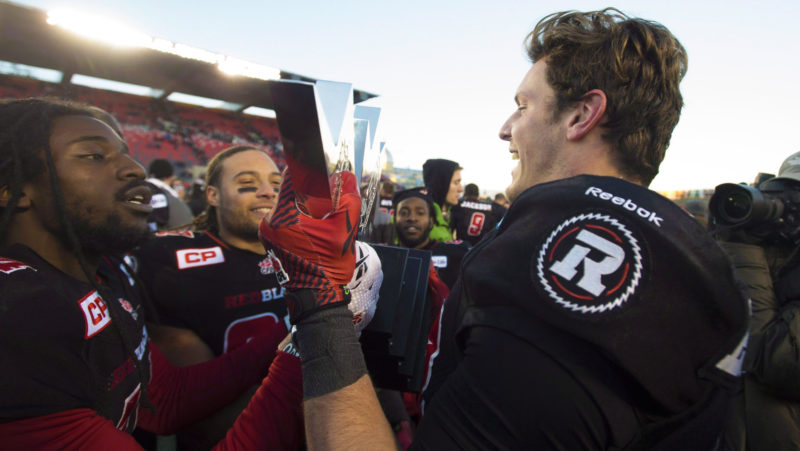 “To me, the catch wasn’t the shock part,” continued Sinopoli, who had a feeling Ellingson was going to come down with the catch. “The shock part was him being able to get away from the second guy coming in. He put a little hesitation on him and that was the biggest thing. Him making that catch, I think that was pretty routine for him. But to be able to get away and then score, obviously it was pandemonium.”

That moment on a November afternoon in Ottawa was almost the perfect representation of Ottawa REDBLACKS football over the next few years. Following their inaugural season in 2014, things turned around for the best in the nation’s capital as they would go on to take three trips in four years to the Grey Cup.

“It kind of caps off what we were capable of. It was a really good representation of what the team was and the guys that were there,” said Sinopoli. “Throughout the time with those guys, plays like that happened quite a bit and maybe not as dramatic, not a last-minute thing. But I’ve seen Greg play with two guys around him and go up and get a jump ball multiple times in a game. Just because it was Week 7 on the road and we lost, those things weren’t really a big deal.”

“When we first came into camp, it was a weird feeling,” he continued. “Coming into a team that was new and 2014 wasn’t a great year. You can kind of feel the pressure of, ‘you can’t do that again, you can’t be a part of a team that goes 2-16.’

“I think that kind of was the cap on it all that proved that we can do this and now we’re in the Grey Cup. You just need that to happen to have the confidence and we carried that the next couple of years. I think that’s the picture that defined that year, for sure.”