Standout statements from the Argos’ State of the Franchise

Standout statements from the Argos’ State of the Franchise

TORONTO — This year, the Toronto Argonauts brought their annual State of the Argos address virtually to season ticket holders.

President Bill Manning, general manager Michael “Pinball” Clemons and head coach Ryan Dinwiddie joined a video meeting to discuss the state of the franchise and where the team is headed going into 2021 and beyond.

The trio touched on many subjects including the new logo, bringing in players who live in the GTA and how they’ve been keeping busy during this unprecedented year.

Here are the best quotes from Tuesday night’s address. 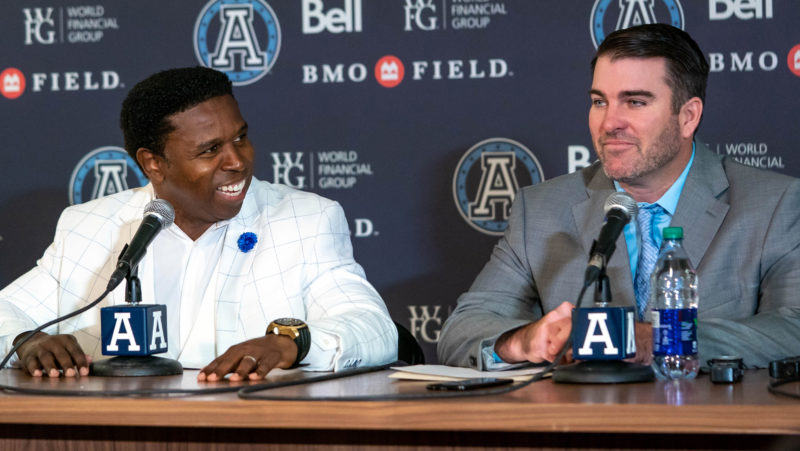 Clemons and Dinwiddie, pictured here when Dinwiddie was hired as the team’s head coach in 2019, addressed season ticket holders in the State of the Argos on Tuesday (Argonauts.ca)

“I think it’s a really good looking logo. I think the one thing about the Argos that never will go away is the great history of this franchise and so to bring back the boat logo, I hope and think will be well received. I remember my first year as team President and I had a number of people, one guy actually came and knocked on the door in the suite of a games and was like, ‘bring back the boat logo.’ We do hope it’s well received and I think it’s an iconic remembrance of this franchise and what is old is new. We’re really excited about it and at the end of the day, logos are meant to represent and so we hope that it represents the past and the future as it’s moving forward.”

– Manning on the new logo

– Clemons on the new logo

“I like to look fancy. You know, I played at one point and you always say you play good, you look good. Same thing on the on the sidelines, you want to look nice and it’s just a classy look. The players like little things like that. I like the fact that there’s, like we said, there’s history behind it. A lot of our Americans coming in are gonna be rookies, so now they can kind of understand the background of the city and what we’ve done in it. Also, it’s a fresh start for us, it’s time for us to start new and build our own traditions. I always talk about legacy so  I think this new boat builds, along with our legacy, what we’re trying to develop here.”

– Dinwiddie on the new logo

“We were working every day during the pandemic preparing for what was to be and so (the season) didn’t happen but that just prepared us a little bit more. That got us ahead for where we are now and we are still meeting on a consistency. We will have another meeting tomorrow morning, getting at it, going through our rosters, going through every other team’s roster, going through the draft and eligible draftees from a year ago, which gave us a really robust draft last year. Now we’re doing the same theme cycle up again for this year. We’re looking at what’s happening in scouting down south virtually for now, hopefully we will do a little bit more proactive as time moves on. But it has been an electric time.”

– Clemons on keeping his staff busy during the pandemic

“Once the season got cancelled, I gave our guys about two weeks off and said, ‘hey, get with your family. You know, lick your wounds a little bit, but we got to get back to work.’ For the most part, we’ve been going. No, I don’t do it every day with those guys, we’re usually Monday, Wednesday, Friday. We’ll make some Tuesday, Thursday, to go over some things. I’m excited about our staff. Those guys been loyal. We’ve had scheduled meetings all off-season, they’ve been willing to do it and dialled in and all about it.”

– Dinwiddie on meeting with his coaching staff during the pandemic

“Ryan, I did not know much about. He really was Pinball and John’s (Murphy) recommendation. He did have the approval and the recommendation from Calgary and John Hufnagel, who, as I’ve gotten to know him over these last couple years is as well respected as any football guy I’ve ever come across. Now I’ve gotten to know Ryan a bit better and Pinball really working with him, he’s a workhorse and is dedicated to this team. He moved here with his wife, and his boy, and now has a growing family. Football is what he’s all about. As Pinball jokes, when he asked Ryan, ‘what are your interests?’ And Ryan said, ‘football.’ He said, ‘No, I mean, outside of football.’ He said, ‘Well, no, it’s football.’ And so he is a football guy through and through, and he’s a class act, high character. That’s what you know, I like to surround myself with people that are competitive but people that are good people too.”

“We did have that plan. That was intentional. We wanted to find guys that were close to their home because a lot of times you put really important pieces, you make good picks, and then they leave as free agents to get back closer to home. You can’t blame anyone for one day wanting to be close to their home. We say, well, we got some of the best players that are from here, and why not invest there? That was a an exercise that we went through early.”

“I think we need to get a little bit more depth on the offensive line, I’ll stick to football because that’s kind of my jobs to do anyways, those guys handle that other stuff. But we’ve got to be a little bit better on the front seven guys, o-line and the defensive line. If we can get get that going, I think will be a dynamic team. I think we changed the defensive backs last year, we got longer, got more athletic. The thing is, if you want to have turnovers, you’ve got to have great defensive lineman so we’ve got to improve that a little bit. We’ve got to make sure our quarterback stays upright. Those are really the two holes that I can see right now. But we have guys that we believe in going into camp this year that could fill those things. I guess it’d be more unknown at those positions more than we need to get better players in here.”

– Dinwiddie on any holes he sees on the roster moving forward

“Pinball and I have talked a lot about a dedicated practice field that would be dedicated to the Argonauts. What’s crazy is pre-pandemic, we were actually closing in on one and that was put on hold a bit right now. We’ll re-engage on that end, but that’s, if it was any one thing that we need, (it) would be our own practice facility that that our guys can call home. That’s the biggest need, I would say, for this organization.”

– Manning on the biggest need for the Argonauts moving forward

“My wish list is around our fans. I want us to be closer, to have more intimate relationship with our fans, in terms of using the different mediums we have to engage them more so that they get a chance to know who our players are. So you see that jersey number. It represents more than a, ‘Oh, I see. It’s a 60 so it must be an offensive lineman’ Or, ‘I see it’s 20, so it’s a running back or maybe a defensive back.’ As we begin to associate numbers to people, we want those people to be a very present in our fans minds and being able to have that communication.”

– Clemons on his wish for the Argonauts moving forward