The video opens with Ricky Ray describing perhaps the most unique player that’s ever existed in the CFL and it closes with him posing with Drake, holding the Grey Cup.

The Quarterback Club — a teleconference call that features some all-time great Argo QBs getting together — is a lot more than Ray, but the team’s starter from 2012 to 2018 provided his share of unique insight in the episode that aired during Grey Cup Unite week.

Ray shared a screen with Joe Theismann, Condredge Holloway and Joe Barnes, Damon Allen and Matt Nichols, with the six QBs providing almost 50 years’ worth of stories and experiences. Host Sean Bowen steers the talented cast through the 48:30 video.

We’ll touch on a few of the best moments from the video, but it’s something that’s definitely worth watching in its entirety if you’re an Argos or CFL fan in general. 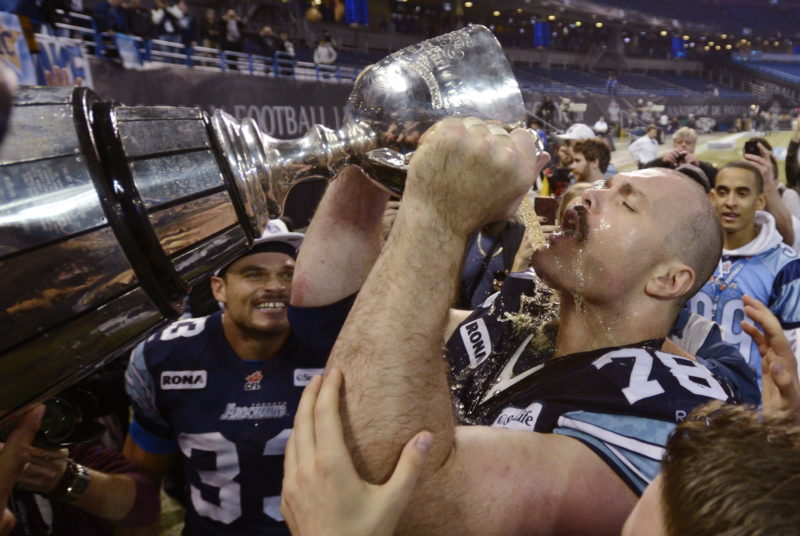 Adriano Belli, the CFL’s kissing bandit, drinks from the Grey Cup after the Argos’ 2012 win (THE CANADIAN PRESS/Ryan Remiorz)

YOUR QUIRKIEST TEAMMATE EVER

If you paid close attention to the Argos’ 2012 Grey Cup run, or more specifically followed the league through the decade before that, you may already know who we’re talking about here.

Ray was only teammates with Adriano Belli for a portion of the 2012 season, but it left a lasting impression on him. The d-lineman was known around the league as The Kissing Bandit.

“He loved to kiss,” Ray said. “He wanted to kiss every quarterback in the CFL. He’d always sit nude in the locker room pregame, putting tape on his shoulder pads and going through his pregame routine.

“We won the Grey Cup and he comes up to me after the game and says give me a kiss now, and he points to his cheek to give him a kiss on the cheek. He turned right into it so we locked lips.”

Ray didn’t enjoy Belli as an opponent — he told a great story of going against Belli in Hamilton and having him stick a Ticats’ decal on his back in the pre-game — but came to very much appreciate him as a teammate in Toronto.

“He turned out to be one of the best teammates I’ve ever had. Everyone in the locker room loved him, there were a lot of fun times with him,” Ray said.

Theismann was a highly-touted (and expensive) signing for the Argos when he arrived in 1971 out of Notre Dame. As a rookie, the Argos went 10-4 and made it to the Grey Cup game, where they fell to the Calgary Stampeders.

He knew about the three downs, the bigger field, the extra player, etc. But being on the field in those first moments of his CFL career there was still a learning curve.

“I think I understand the rules. Everyone starts running to the line of scrimmage and I back away from the centre and the official throws the flag,” Theismann recalled, laughing.

The ref told him that the other guys can move, but he can’t.

“That was my first snap in the Canadian Football League,” he said.

“It was a great bunch of guys to play with. I can name as many guys off my Argonaut teams as I could from the Super Bowl team that I played on in 1982. All those years went by but there was a great bond and a great relationship.”

THE QB TANDEM THAT LED THE ARGOS TO THE GREY CUP

We saw it last year when Winnipeg won the Grey Cup, a team that used a quarterbacking duo to keep defences guessing. In the early 1980s, a pair of Argos’ legends worked together to get their names on the Grey Cup. Condredge Holloway and Joe Barnes teamed up in 1983 to get the Argos past the BC Lions in the 71st edition of the championship game.

Holloway had dealt with the flu all week leading up to the game and wasn’t himself when he took to the field. Down 17-7 in the second quarter, coach Bob O’Billovich turned to Barnes.

“Condredge was sick all week, I saw him throwing up all week,” Barnes said. “I tried to keep myself mentally and physically ready.”

Barnes got the Argos’ offence going and Toronto jumped ahead in the fourth quarter and held on, ending a 31-year Grey Cup drought.

“Well, believe it or not, coaches don’t take players out of the game when they’re playing really good,” Holloway joked.

“And when you have Joe there, you don’t hesitate. You’ve got Joe there and he can come in and do whatever and if that didn’t work — and it always worked — you’d stick the bad guy back in. We got along well with the quarterback position. Both of us had experienced success before we got there. We knew what it was like. There was no pouting and all this stuff. Our motto was we need to be winning and whichever one could help us do that, let’s go.”

“We had a great relationship,” Barnes added.

“Condregde opened his home to me when we broke training camp. I probably stayed with him for a month before my family came up and we’d known each other for quite a while. We’d played against each other in college in a bowl game.

“When I got to Canada he’d already been there. Being on the same team together was great. I got hurt in ’82 and Condredge stepped right in and took over and he took us to the Grey Cup and won the MVP of the league. Then in ’83, my job was to come support him again and…as a quarterback that’s what you have to do. You have to be mentally and physically prepared to play when you’re called upon.” 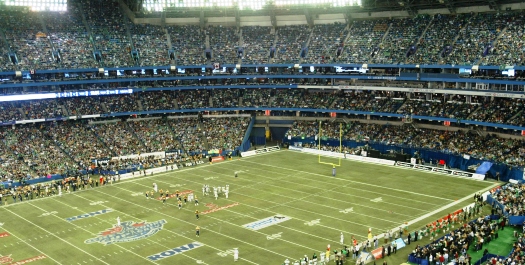 Its future has question marks around it, but for many Argo players, the Skydome/Rogers Centre holds many fond football memories

For 17 years, the Argos played under the retractable roof at Rogers Centre, which was a luxury to CFL players that have dealt with the elements for the majority of their careers.

“Don’t forget, I started in Edmonton and when I first came to Toronto we were playing at the CNE,” Damon Allen said.

“I experienced playing outdoors and playing against that wind…that was the first time I’d seen the Blue Jays playing a playoff game when it was snowing.

“Playing in the Skydome, there are times when you’re so used to playing outdoors…there were times it’d be raining in Toronto and I’d be pissed off and then I realized I’m playing indoors. I really enjoyed the Skydome. I had the tale of two seasons. The second half of my (career was) all indoors with BC and Toronto.”

It’s something that Ray, who also came to Toronto from Edmonton, enjoyed as well.

“Coming into Toronto I was excited,” he said. “Playing in the Skydome where you basically get the same weather conditions every game, you love that as a quarterback. You never had to worry about the wind or the rain affecting the passing game.”

When Matt Nichols signed with the Argos in January, he didn’t know that it would be his only trip to Toronto in 2020 (Photo: Argonauts.ca)

The cancellation of the 2020 season prevented us from seeing Matt Nichols take the field as an Argo, but that didn’t stop him from joining his former Edmonton teammate, Ray, and the other Argo QBs on the call. Decked out in Argos gear — he did get to make a stop here when he signed with the team in January — he’s ready to get on the field and get into what he’s hoping will be the best part of his career.

Working out in his hometown of Cheney, Washington, Nichols has trained young quarterbacks and found ways to stay sharp this past year.

“I’m continuing to work out, really trying to get better and better at everything I’m doing. When you start working with young quarterbacks you remember all the little things that you need to work on to continue getting better,” he said.

“Physically, mentally, with eating habits, it’s given me a lot of time to rethink my training, my eating and make sure I’m in the best condition possible to help my team win. It’s a longer wait than I wanted as well, but making the best of it.

“I’ve got home daddy daycare with my two daughters, spending a lot of time with them. It’s been a different type of off-season, but it’s the first time in 11 years that we’ve been able to do a lot of things that we hadn’t been able to.

“It really helped recharge the batteries and I’m looking forward to having time speed up a little and get back into that locker room and get back on the football field, as much as everyone’s hoping for the same thing.” 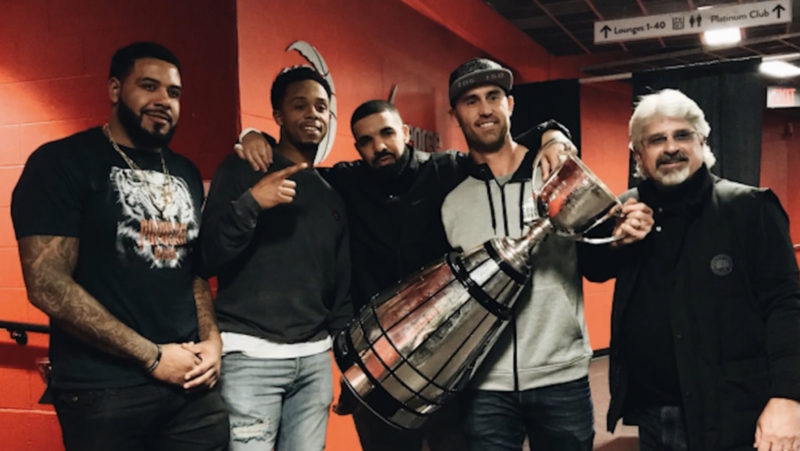 WHEN RICKY RAY AND THE ARGOS MET DRAKE

In the days after the Argos’ dramatic 2017 Grey Cup win, the team was invited to a Raptors game to be celebrated by the sellout crowd at what was then known as the Air Canada Centre. They hoisted the Grey Cup at centre court and when the Raptors were in the locker room area after the game, they ran into Drake.

The quarterbacks were asked who they’d pick to have perform at a Grey Cup halftime and the Toronto-bred rapper/star was the first person that came to mind for Ray.

“That’s my claim to fame,” Ray said, as a picture of the meeting flashed on the screen.