It was a season that football fans in Ottawa had hoped and waited for through eight long years and in 2014, it finally happened.

The Ottawa REDBLACKS took to the field as a brand-new franchise but one that rekindled one of the country’s strongest fan bases and its connection to Canadian football. Six years later, we can say that it’s been a huge success. The city opened its arms to the new organization and in turn, Ottawa Sports and Entertainment Group has offered the stable, local ownership that had been missing with the previous editions of Ottawa’s CFL teams.

The REDBLACKS have served as a model franchise in the league, packing TD Place with fans from Day 1. By Day 365 they were competitive and by day 730 or so, the entire experience was coming together. The team played in back-to-back Grey Cups in 2015 and 2016, dropping their first appearance to Edmonton and rebounding the next year with a stunning overtime win over a heavily-favoured Calgary team. The REDBLACKS made it back to the 2018 Grey Cup, where Calgary got its revenge, denying them a championship in Edmonton.

There have been some low points along the way, but overall, the REDBLACKS have had a staggering amount of success in their first five seasons.

As part of the Remote Reunion driven by Kubota series, some alumni from that 2014 team got together to look at the team’s home-opener against Toronto. The expectations on the team were tapered; expansion teams rarely shine out of the gate. The 2014 REDBLACKS went just 2-16, but provided arguably their most important win of the season in this game, giving their fans something to celebrate and a taste of what the coming years would be like in the nation’s capital.

When your job is to cover an expansion team, you get unique challenges and experiences along the way, too. Postmedia’s Tim Baines and TSN 1200’s A.J. Jakubec were there in 2014 and are still there today as the beat writer and the play-by-play voice, respectively, of the team. Here are some of their best memories of that home opener and the 2014 season as a whole. 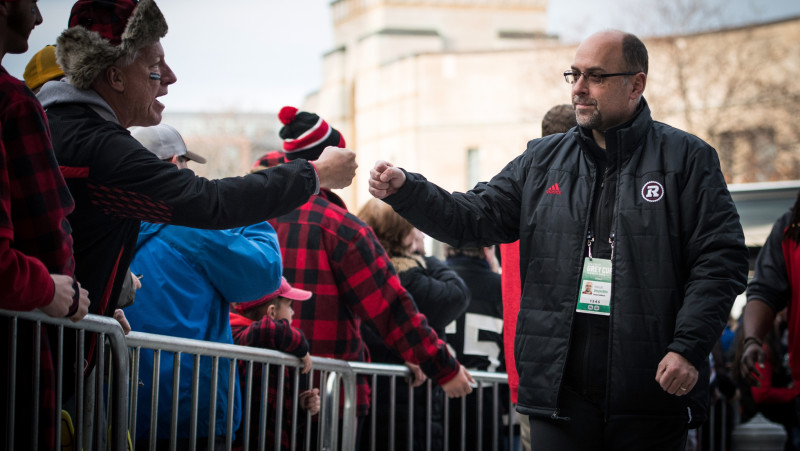 REDBLACKS’ GM Marcel Desjardins was employee No. 1, working on his own in the franchise’s earliest days (Johany Jutras/CFL.ca)

YOU’VE GOT THE GIG

Tim Baines: The funny thing about that is that I was actually the sports editor of my paper (the Ottawa Sun), when it was announced that the team was coming back. So that probably goes back a couple years before they actually took the field. At the time they were thinking they needed to add a columnist, there was a team coming in. And I said, ‘I’m the guy for the job.’ We kind of all laughed about it and then they came back to me and I have a bit of a football background and I was hoping to get back into writing.

I remember going and interviewing (general manager) Marcel Desjardins when he had an office, I think was on Industrial Avenue and he was basically the only employee for the team. It just picked up momentum from there as we got into the expansion draft in December of 2013. It became a focus because there was a lot of excitement around the town about our third CFL team. So I really tried to build on the momentum down the stretch from December with the expansion draft into training camp in May.

A.J. Jakubec: I had an inclination in 2013 but I had never called football in my life. I’ve called nine different sports and actually the ninth sport that I called was football.

I grew up with the CFL but there aren’t a lot of opportunities really, to call football in this country. Dave Schreiber had been the guy (in Ottawa), but he was retired by then. I was asked if I was interested and definitely said yes. Jeff Avery and I called the Panda Game in 2013. I did a few university football games that year, so that got me at least around to broadcasting football.

I know it was a challenge, especially that first year I did it. I felt like I was kind of taking on water the entire time. You know how you grew up listening to football on the radio, so you know how you want it to sound. And I remember calling hockey for the first time. It felt like it was coming out of my mouth the way it should be. In football, it took a lot longer before I really got comfortable.

That first year was challenging. The other thing I remember and I certainly wasn’t the only one… this was the TSN guys, this is the visiting guys for sure. The uniforms were a nightmare (to identify from the broadcast booth) with the red numbers on the black jerseys.

I actually screwed up. I think Jasper Simmons had the game-sealing interception against Toronto, when they won the home opener and I said it was T.J. Hill. Those numbers kind of drove people up the wall for a couple of years, certainly broadcasters.

A BUZZ AROUND TOWN

Jakubec: I grew up in Edmonton and I moved to Ottawa in 2003, so I got to experience the back half of the Renegades. When they left there was a sense that this thing wasn’t coming back. It wasn’t too much after that when the Renegades died, that Jeff Hunt was involved. I was doing 67s games, broadcasting 67 games from ’03 on and I knew the history of how he had kind of helped save 67s.

So all of a sudden in comes Jeff Hunt and he had a plan. As soon as his name was involved, you kind of thought, ‘OK, maybe this can work.’ A lot of the other people haven’t been able to work, but you kind of thought there was some hope here.

Baines: I certainly don’t think there was skepticism, I think there was just genuine excitement. I think there’s kind of a misconception that…the reason the Rough Riders died, the Renegades died was for lack of support. I think a team like the Argos or the BC Lions would have been thrilled with the crowds that Ottawa was getting, even when they folded. It wasn’t like they were drawing 10,000 or 11,000 people, they were still drawing, the crowds were still sometimes upwards of 20,000.

It was wrong place, wrong time a couple times with ownership groups. Maybe the lease wasn’t the best they had on the stadium. But I think certainly that perception of the ownership group coming in the Ottawa Sports and Entertainment Group was, we’ve got local owners and local owners with deep pockets and who had a genuine…there was civic pride involved. I think that the perception was these owners aren’t going to let this fail. Obviously, the crowds were there from Day 1, there was a long string of sellouts and really it hasn’t looked back since then.

From their home-opener win, the REDBLACKS lost nine straight to fall to 1-11 before they got a 42-20 win over Winnipeg at home in Week 15. They closed out the season with a five-game losing streak to finish 2-16. There were a lot of close games in there, but the offence’s deficiencies were continually exposed that year. The buzz about having a team was there through that dismal record, but the week-to-week stuff was difficult to write about.

Baines: I guess if it’s a long string of being bad, if the team year after year is being bad, I think that would affect your writing but I think the players maintained an enthusiasm. I think it was a blind enthusiasm as in some of them didn’t know any better. Certainly, there were some guys who did kick around the CFL for a few seasons but there were also players that came from outside, it was their first year in the CFL and they kept up that enthusiasm through practices.

I think as a writer, you cut a team some slack. You know they’re an expansion team. So if you went in there and you wrote negative after negative: This team is bad. The offence is bad. The coaches are bad. The GM is bad, everything is bad and everything is horrible, I think that starts to wear on you as a writer.

Even through the good years I tried to keep that approach where I tried to introduce the readers to who the players are, not so much about what they’re doing on the football field because that gets redundant if you do that day after day. I didn’t didn’t dwell on the 16 losses as much as I tried to paint a picture of who these guys were.

A LITERAL WORK IN PROGRESS

Everything was technically ready for the REDBLACKS that season in terms of their stadium and the locker room, but there were final touches taking place throughout that first season. If there wasn’t work being done on the stadium, construction surrounded the area as a condo tower that overlooked the field and what would be known as the Landsdowne Live area was coming together.

Jakubec: Training camp took place in 2014 at Carleton University. Early on the first couple of weeks of the season they were practising at TD Place. Those first two to three weeks, going in and out of TD Place you had to put a hardhat on, you had to go through a certain entrance and you were accompanied by security and then you make your way onto the field.

You went from literally a construction site to welcoming 24,000 people for your first-ever home game.

Baines: It was pretty crazy. You’d be at practice trying to interview someone and there was construction going on. I think the scoreboard was finished if I remember right, basically the day before the game or the day of the game. There was always stuff going on. 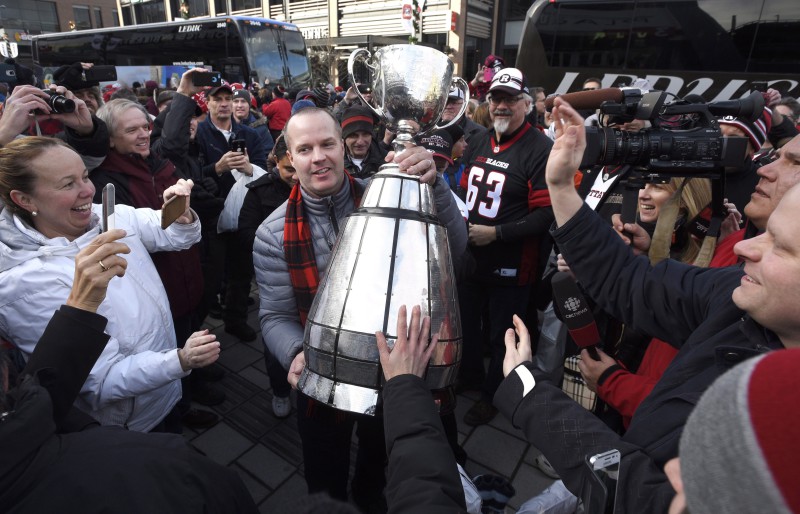 In his first head coaching job, Rick Campbell was a perfect fit in Ottawa, where he took the REDBLACKS to three Grey Cup games, winning it in 2016 (Photo: The Canadian Press)

A PAIR OF AMBASSADORS

With a new organization settling into the community, it was important to have the right faces in front of cameras and microphones daily. The REDBLACKS had two perfect people in those roles, in coach Rick Campbell and QB Henry Burris.

Baines: Rick Campbell was the perfect coach for the team at the time. That’s because of his demeanor, he’s always calm. He wasn’t flying off the handle, kicking over trash cans, throwing things at the wall in the dressing room.I think the team maintained a positive atmosphere because obviously when you’re never winning, that kind of thing can kind of fester and people can get angry in the dressing room, but I think they kept a pretty good attitude.

Jakubec: I’ll be honest, when they went with Henry Burris…who was 39? You’re wondering what’s the best before date here? Right? I’d watched him but not knowing much about Henry and how he lived his life and how he treated his body, you don’t really know, right? It could have been three more years, it could have been three more weeks of good football. I was a little bit skeptical.

Even early on and in 2014, water 2015 watching them and preseason there were questions (about) what does Hank have left? And in the end, he proved everybody wrong. That’s what Hank does.