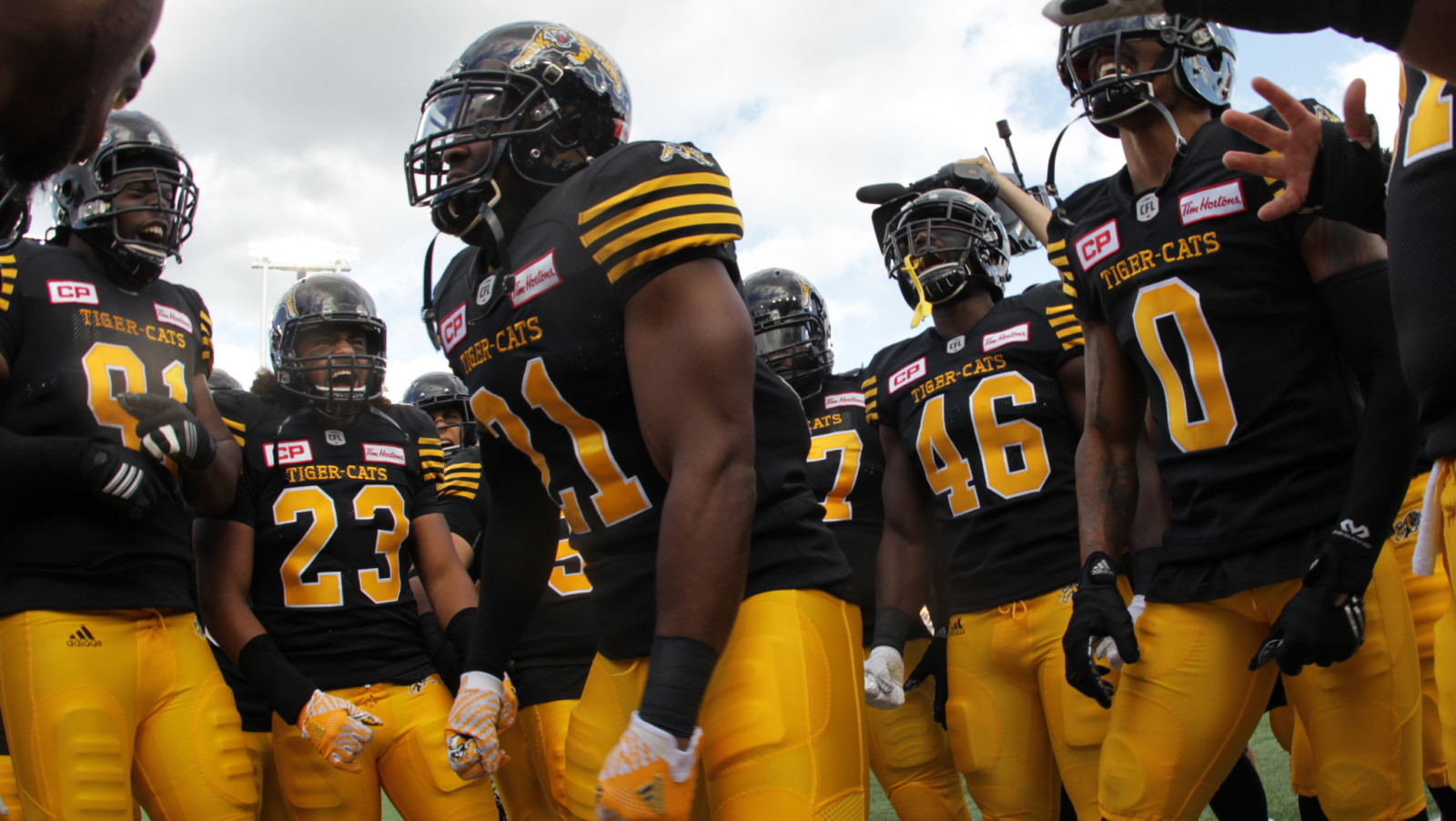 From re-watching games from years past, like the Raptors championship run or the Michael Jordan documentary ‘The Last Dance’ nostalgia has been a big part of our sports fix in 2020. The same goes for the CFL. Whether it was retro games on TSN and CFL.ca to plunging down your own personal YouTube rabbit hole of classic Pinball Clemons moments, we have all done what we had to do during these difficult times.

In that spirit I’ll be doing a 10-part look back at the history of the team uniforms for every franchise. Don’t worry, this will not be a series of essays of me critiquing the colour scheme of linebackers. My fashion sense is minimal at best. My goal whenever I would shop for clothes (remember shopping?!) was to get out of the store as quickly as possible.

Thanks to a great amount of research done (shout out to Mackenzie Trimper from the CFL) I have been given a treasure trove of old photos, action shots and a catalogue of every team’s jersey and helmet from their inception to their current day look. I have used this research to not only look back at the evolution of the uniforms but also to highlight some fantastic vintage moments from the last 60-plus years. My hope is that you will learn something about this league, you’ll get to relive some of the glory years and quite often you will wonder, just what the hell were they thinking?

Let’s start with the Hamilton Tiger-Cats. 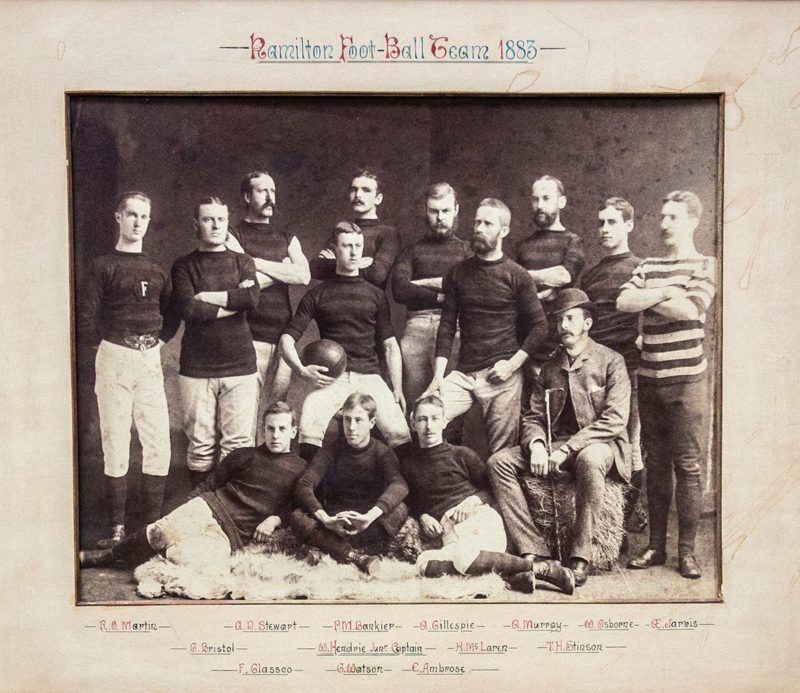 (Photo supplied by the Canadian Football Hall of Fame)

I have so many questions about this picture of the 1883 Hamilton Football team. Did the photographer tell all the players to look in any direction they want? Usually for a team photo the idea is for the squad to, you know, all look in the same spot simultaneously to create a sense of unity and togetherness. Instead it looks like someone had 100 laser pointers and each player was tracking their own laser dot like some crazy cat. To be fair, if this is what happened the players would be amazed as lasers were not around 137 years ago.

I was dumbstruck at the football, which looks to just be a giant medicine ball, until I remembered this team was a part of the Ontario Rugby Football Union. I can’t imagine the deep post routes would work hurling that giant thing downfield.

At this point I realize I have buried the lede: Look at the three players lying semi-seductively on what must be a bear skin rug! I wish I could have been in the room when they were all deciding how to frame this shot. Also can we please bring this back? I demand that the Grey Cup MVP, Most Outstanding Canadian and the winning coach to be sprawled out on a luxurious fur rug as part of the championship photo. 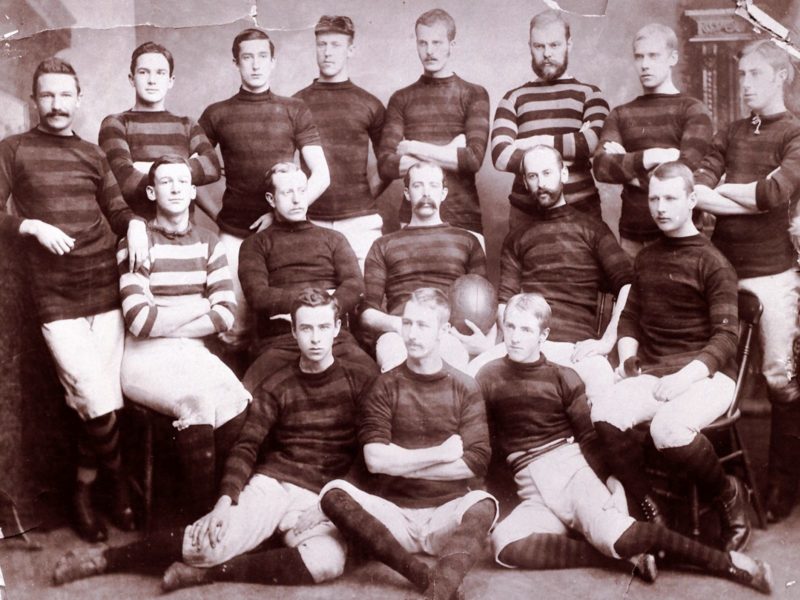 It is fairly obvious that at least half of these guys could be a part of Derek Zoolander’s entourage. Let me be the first to say it: The 1886 Hamilton Tigers (yes, that was their name) were a good-looking group of guys. I also enjoy uniforms that scream “prison chain gang.” 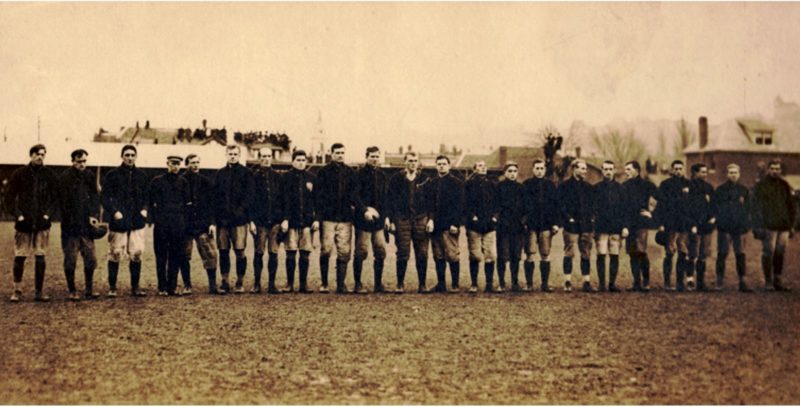 I can’t really decide if this is a team photo of the 1910 Hamilton Tigers or just everyone waiting to go back to work at either the steel factory or the loading docks at the harbour. What a dreary looking shot! Where are the sultry smiles, pouty lips and luxurious flooring? 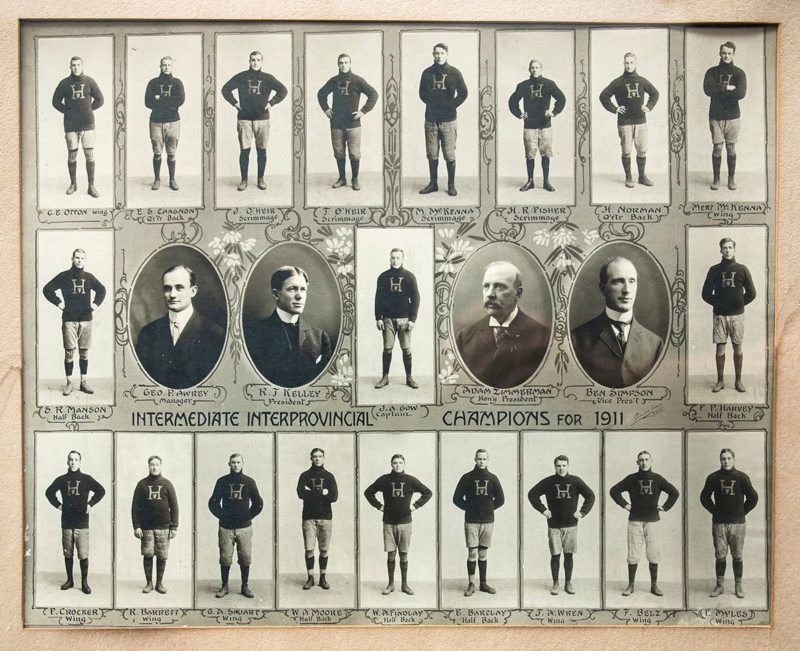 Say hello to your 1911 Ontario Rugby Football Union champions. Safe to say uniform technology has come a long way in the last century. Back then it was less about protection and everything about slim-fitting sweaters. The 1911 squad looks like they’re ready to hit the ski chalet bar after a tough day on the rugby field. 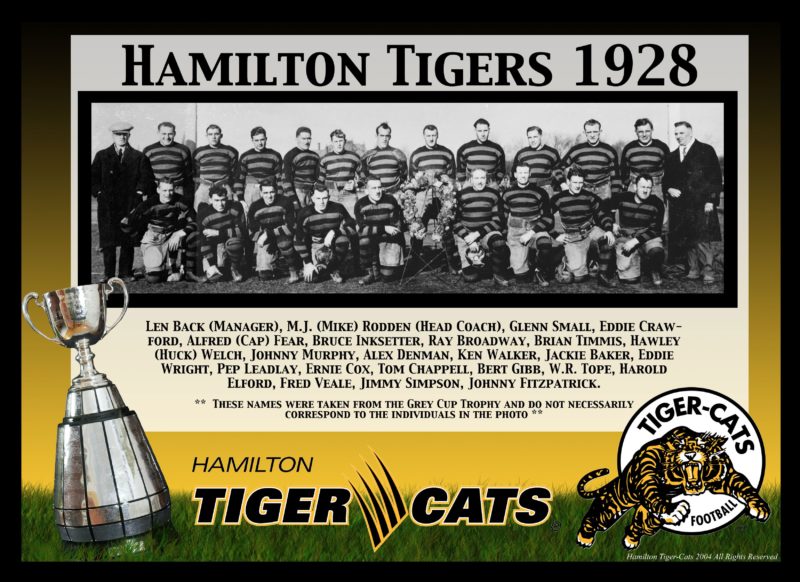 Now here’s something that I have never seen in a team photo, flowers!!! Did the 1928 Hamilton Tigers win a horse race? Did they do that for every Grey Cup winner back in the day? The 1928 Tigers beat up the Regina Roughriders 30-0 in the Grey Cup and as part of their spoils, received a classy floral arrangement. 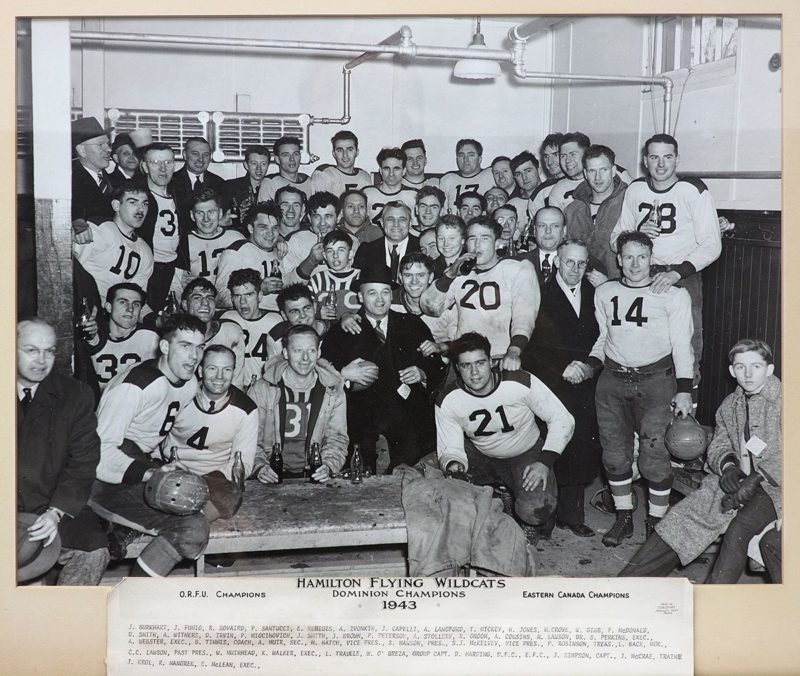 Some teams party in fancy night clubs, high-end steak restaurants or on a confetti-laced football field. The 1943 Hamilton Flying Wildcats celebrated their 23-14 win over the Winnipeg RCAF Bombers in what clearly looks like a factory basement. Though in 1943 we were in the middle of World War II so maybe they needed to be underground. My dad would tell me stories of having to go lights out in Hamilton at night for fear of the German air force. I highly recommend that you zoom in on this picture and go through all the players and coaches. There’s such a wide array of emotions and fun reactions. 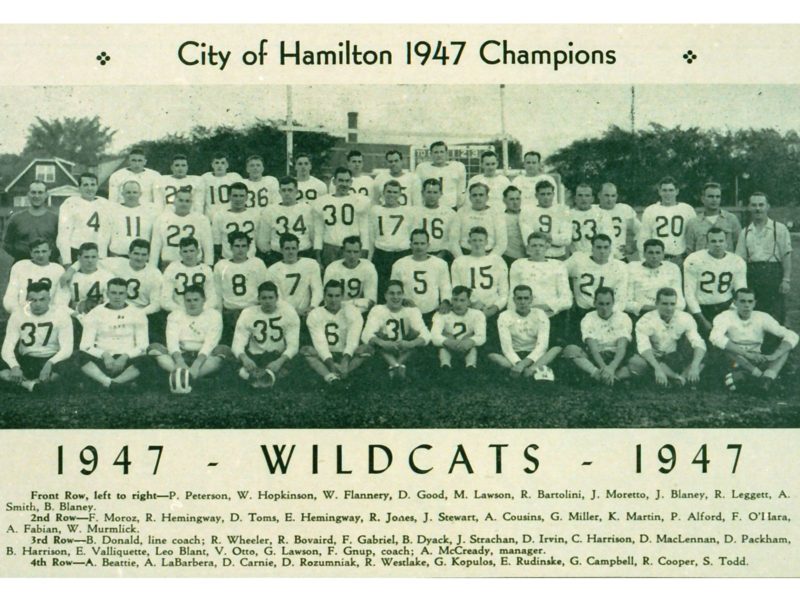 You may not find a more simple uniform than what the 1947 Hamilton Wildcats wore: All white with extra-large black jersey numbers plastered on the front. I miss the fancy sweaters from the 1886 Tigers team and I’ve already lost count of how many different team names Hamilton has gone through. 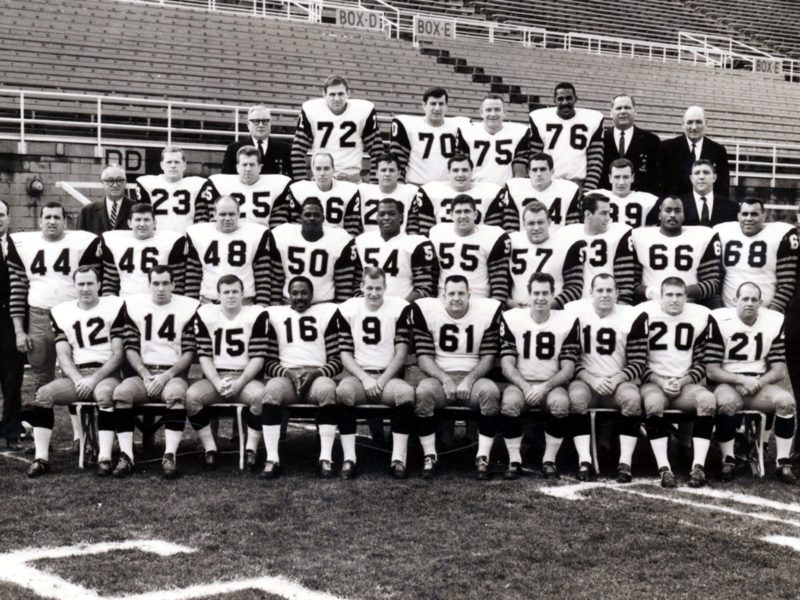 (Photo Courtesy of the Canadian Football Hall of Fame)

By 1967 the Tiger-Cats uniforms are starting to look like the Black and Gold that most of us are used to. This squad would defeat Saskatchewan 24-1 in the Grey Cup. I bring up this shot to highlight for the younger readers No. 75, Tommy Joe Coffey. You can find him and his big smile in the middle of the top row. Tommy was a seven-time All-Star, won two Grey Cups and had over 10,000 receiving yards in his Hall of Fame career. Also according to Wikipedia, Joe currently has six grandchildren, 13 great grandchildren and two great, great grandchildren. Congrats to the entire Coffey family and I hope he has plenty of help when it comes time to do the Christmas shopping. 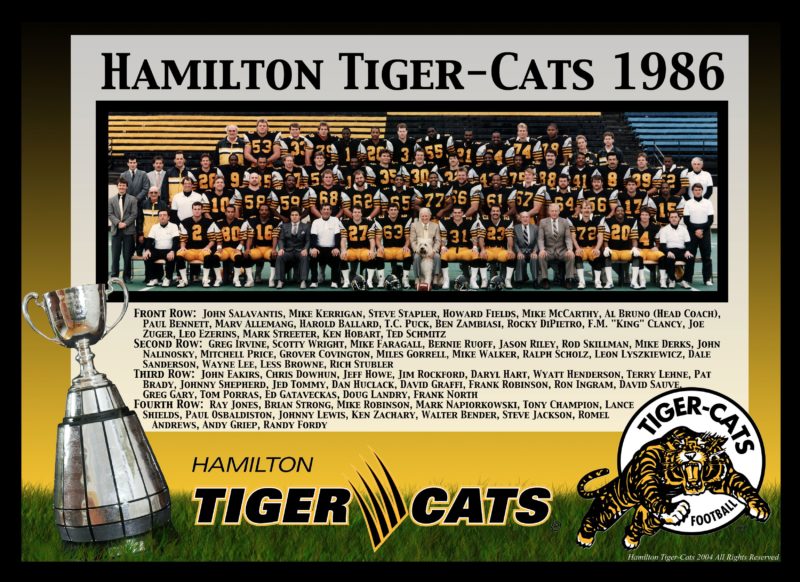 I did not include the 1986 Tiger-Cats team photo to highlight Mike Kerrigan, Paul Osbaldiston, Less Browne or anyone else from that championship team. I want you to take a look right in the middle of the front row. You see that old grinning fool right next to two-time All-Star Marv Allemang (yep, the father of the Ticats’ current senior director of personnel and co-manager of football ops, Drew Allemang)? That’s Harold Ballard!

The best part of this picture is that they actually included the name of Ballard’s dog in this photo. The players must have been thrilled knowing that T.C. Puck would be included. Sure, they were the ones that sacrificed their bodies for the sport’s ultimate prize, but Harold insisted his dog be a part of the team.

All right now I’m just getting angry, let’s move on. 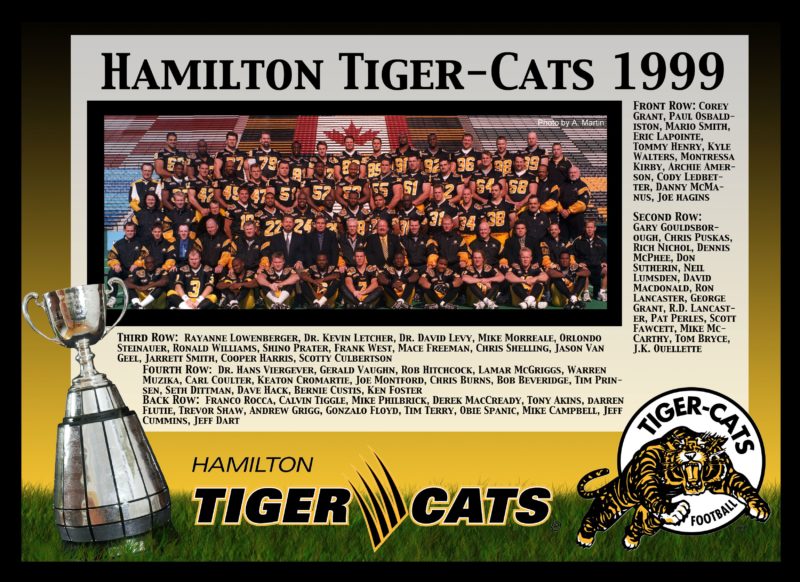 For my final picture, here is the group of players who last brought back the Grey Cup to the good city of Hamilton. The 1999 team is such a curious group. How does a team go 11-7 when they scored 100 more points than any other team in the league and were a close second in points allowed? They would finish the season with a ridiculous +225 point differential yet “only” won 11 games. This easily could have been a 14 or 15-win team with six of their losses coming by a touchdown or less. During that season they had one of the greatest bounce back games, demolishing Winnipeg 65-15 after losing to 52-19 to Montreal the week before.

The sneaky best part of this photo is Joe Montford and his purposely rolled up sleeves. I mean, welcome to the gun show, everyone. In case you can’t find him, he is wearing his No. 53 jersey in the second row from the top and is the one clearly flexing for the camera. You know what, when you put up 26 sacks in a Grey Cup-winning year you can pose however you want.