O’Leary: Taking a closer look at the neg list reveal 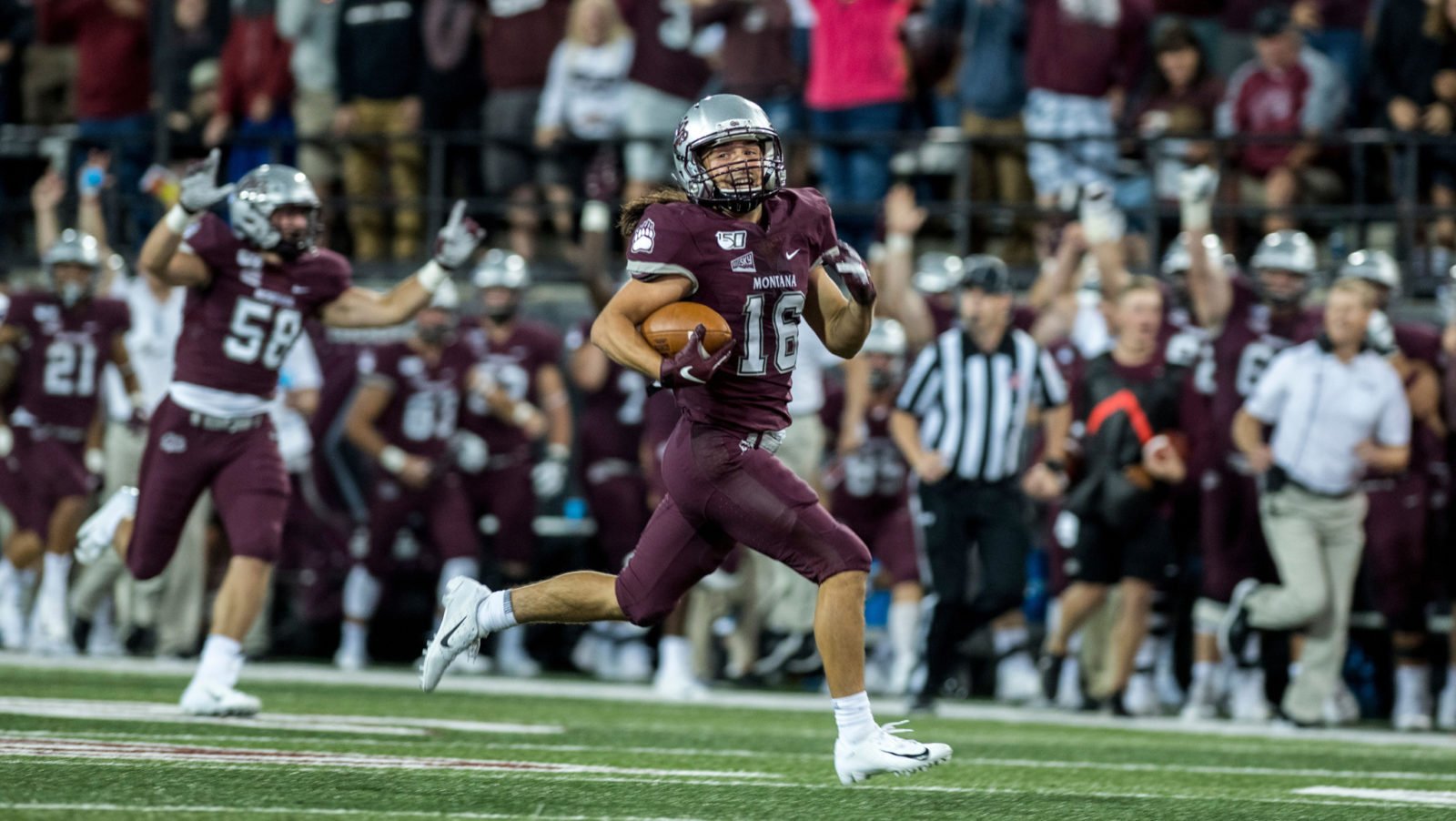 O’Leary: Taking a closer look at the neg list reveal

Photo courtesy of the University of Montana

The CFL’s December release of the negotiation list comes at the perfect time. While we all have holiday wish lists on our minds, CFL fans can divert their attention to the needs of their favourite teams and hope to find some promising college or NFL talent on their lists.

The neg list is the most vital component of how teams build for their future. High-end American talent is almost always secured through the neg list, which essentially works on a first-come first-serve basis. When a team spots a player at the NCAA or NFL level that they’re interested in they can put that player on their list, if another team hasn’t already taken him or her (we see you, Sarah Fuller). The list is very fluid and can change by the minute, if teams wanted to do that. There’s a 45-player maximum on each team’s list and listed players can be traded from team-to-team within the CFL. Vernon Adams Jr. is an example of one of these trades, when his rights were dealt from BC to Montreal in 2016.

In each list reveal, teams share the names of 10 players on their lists. Here’s a look at a player of interest from each team. 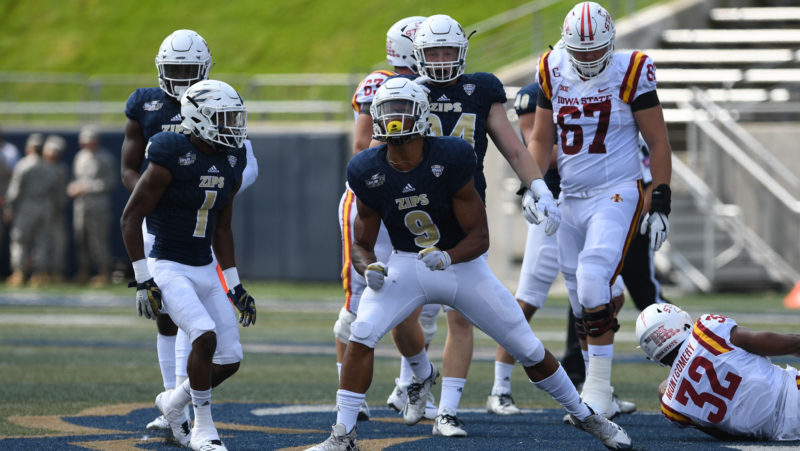 In the CFL, Davis would look to duplicate the success of Akron alum d-linemen Almondo Sewell and Shawn Lemon (Photo courtesy of the University of Akron)

Davis, 25, would be a hulking presence on the Als’ d-line. The six-foot-four, 240-pounder spent time with the Miami Dolphins last year and has gotten looks from Green Bay, Tennessee and Houston and still has NFL options. He was on the Cleveland Browns’ practice roster two weeks ago but was subsequently released again. At Akron, Davis had 82 tackles in his junior season in 2018, with 5.5 sacks, an interception and six pass breakups. He could be the kind of player that new Als’ DC Barron Miles would love to have in Montreal in the spring.

Adams is a monstrous prospect for the Lions’ offensive line. The six-foot-eight, 311-pound tackle is spending his rookie season in the NFL on the Bills’ practice roster after an all-Pac-12 selection as a redshirt senior in 2019 at Washington. Adams has NFL size and could take advantage if the right opportunity presented itself. At just 23, he should get those chances, whether it’s with a surging Bills team or other squads that likely have him on their radar. It could be a long wait but if he fell to the Lions down the road, Adams could be a (literally) giant problem for CFL d-lines for years to come.

(Irrelevant but worth mentioning: I have all of the time in the world for someone that proudly rocks a mullet like this one.)

There’s a Montana connection here, with Edmonton GM Brock Sunderland hailing from Great Falls and playing for the Grizzlies. The Montana program has provided players (Bombers’ QB Dalton Sneed), coaches (Craig and Dave Dickenson) and execs (Sunderland) to the CFL over the years. You know with Grizzlies players that you’re getting tough athletes that can deal with the elements, which helps ease their transition to the CFL. McGee could be the next player to make that move.

The five-foot-nine, 171-pound receiver and returner was a second-team All-Big Sky punt returner and an honourable mention All-Big Sky receiver in 2018. He finished his four-year career in 2019 as Montana’s all-time leader in pass receptions, with 230 for 2,277 yards. He took 68 punts back for 772 yards with three touchdowns and posted 3,685 all-purpose yards in his college career. That’s a pretty good career for a walk-on.

Walker, a six-foot-two, 278-pound d-lineman, has the resume of a CFL-bound player. Now 26, he’s come close to the NFL a few times, being a final cut in the camps of the Chicago Bears in 2018 and the Kansas City Chiefs in 2019. He took his passion for chasing quarterbacks to the XFL and led the league in sacks playing for the New York Guardians, before the league terminated its season in April because of the pandemic. His 4.5 sacks in five games caught the attention of the Pittsburgh Steelers, but he unfortunately didn’t make it through the cutdown day. A big, aggressive d-lineman, Walker sounds like he has the makings of being a perfect addition to the Ticats’ vaunted d-line.

A first-round pick by the Philadelphia Eagles in 2014, Smith is listed as a linebacker but played multiple spots on the field through a five-year stay in the NFL that took him from Philly to Seattle and eventually Washington, where he was a final cut in the team’s 2019 training camp. At six-foot-three and 258 pounds, the Stamps have him on their neg list as a defensive end. In an very honest piece for The Players’ Tribune in October, Smith detailed some of his mental health struggles and says he’s retired. Out of football this year the 28-year-old wrote a children’s book, Bathtime with Rai, about his experiences of being a Black father. If he were to want to reopen his career, Calgary could be a very good spot for him to do that. 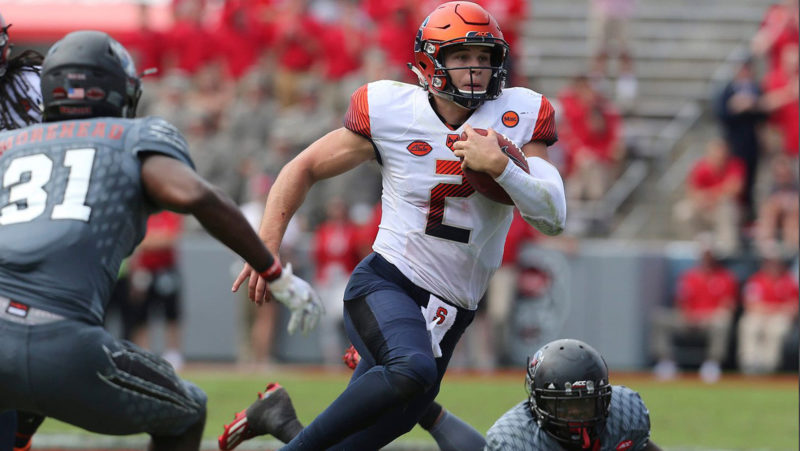 Eric Dungey is a tall, dual-threat quarterback that’s been looking for a pro football home for the last couple of years (Photo courtesy of Syracuse University)

Dungey’s size — six-foot-four and 226 pounds — is interesting and would make him one of the taller QBs in the CFL. Through four years at Syracuse he threw for 9,340 yards, completing 58.4 per cent of his passes with 58 touchdowns to 30 interceptions. He rushed for 1,993 yards, including a 754-yard senior season in 2018. He spent a couple of months each with the New York Giants and Cleveland Browns in 2019, before suiting up for the Dallas Renegades of the XFL in its abbreviated campaign.

Dungey has dual threat capability and on paper seems like he’d be an intriguing CFL prospect. Ottawa will give Nick Arbuckle a good, long look and hope that he establishes himself as their starter for years to come, but Dungey is someone worth keeping tabs on.

Like Ottawa, Saskatchewan is set with a starting quarterback in Cody Fajardo, but Gabriel is an interesting player for Riders fans to keep an eye on. A starter in both of his years with UCF, the Hawaiian-born Gabriel made 227 of his 368 passes this year for 3,353 yards and had 30 passing TDs to four interceptions. Gabriel is six-feet-tall and 186 pounds, which may cast doubt over NFL options for him but as we all know is far less of an issue in Canada. He still has a lot of football to play and much of his story to write, so it’s hard to speculate on what could still be in front of him. Rider fans can take a look at him in the present day though and try to make their own conclusions. UCF will play Brigham Young University in the Boca Raton Bowl on Tues. Dec. 22 at 7 p.m. ET. 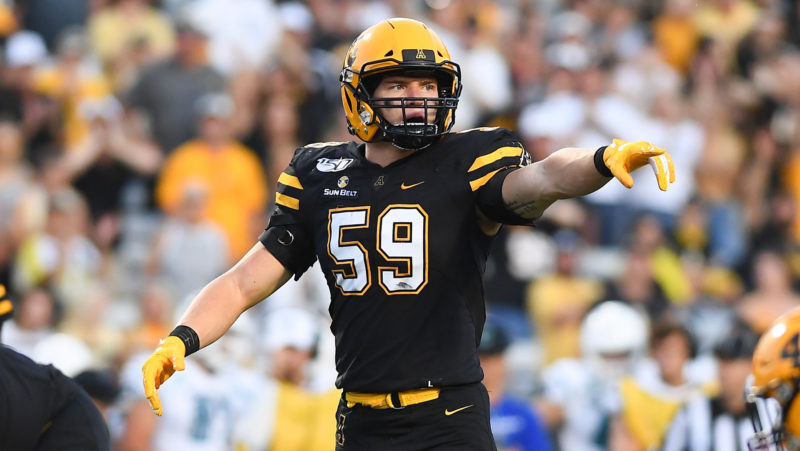 Jordan Fehr was a bubble guy in this year’s NFL draft that was likely hurt by not having a pro day. He could be a great fit for the Argos (Photo courtesy of Appalachian State University)

Fehr was a two-year starter at Appalachian State and had 211 tackles, eight sacks, two interceptions and two fumble recoveries while being named a first-team All-Sun Belt Conference player in 2018 and a second-teamer in 2019. Hurt by an unconventional draft year that didn’t allow for a pro day, Fehr went undrafted. He signed with the Vikings and was a training camp cut, which has sent the six-foot-two, 230-pounder into free agency. In 2019 he ran a 4.45 40-yard dash, a 40.5-inch vertical jump and benched 415 pounds (!!). He sounds pro-ready and like a player that would fit in with an Argos team that’s trying to get back to greatness.

Leading Notre Dame into playoff season, Book is in the running for three awards (the Maxwell, the Davey O’Brien and the Johnny Unitas Golden Arm Award) in his senior season. The six-foot, 206-pound pivot from El Dorado Hills, CA. has made 63.3 per cent of his passes (181-286) for 2,382 yards with 15 touchdowns and just two interceptions. He’s also rushed for 465 yards this year, with eight touchdowns. With Notre Dame at No. 1 in the AP Top-25 poll and Book’s NFL stock rising, this will be a longer-term investment on the Bombers’ part, which projecting quarterbacks almost always is in the CFL. It’s worth noting that including Book, Winnipeg has four QBs on its neg list reveal and likely has more tucked away on its full list of 45.