From re-watching games from years past, like the Raptors championship run or the Michael Jordan documentary ‘The Last Dance’ nostalgia has been a big part of our sports fix in 2020. The same goes for the CFL. Whether it was retro games on TSN and CFL.ca to plunging down your own personal YouTube rabbit hole of classic Pinball Clemons moments, we have all done what we had to do during these difficult times.

In that spirit I’ll be doing a 10-part look back at the history of the team uniforms for every franchise. Don’t worry, this will not be a series of essays of me critiquing the colour scheme of linebackers. My fashion sense is minimal at best. My goal whenever I would shop for clothes (remember shopping?!) was to get out of the store as quickly as possible.

Thanks to a great amount of research done (shout out to Mackenzie Trimper from the CFL) I have been given a treasure trove of old photos, action shots and a catalogue of every team’s jersey and helmet from their inception to their current day look. I have used this research to not only look back at the evolution of the uniforms but also to highlight some fantastic vintage moments from the last 60-plus years. My hope is that you will learn something about this league, you’ll get to relive some of the glory years and quite often you will wonder, just what the heck were they thinking?

We continue with the Calgary Stampeders. 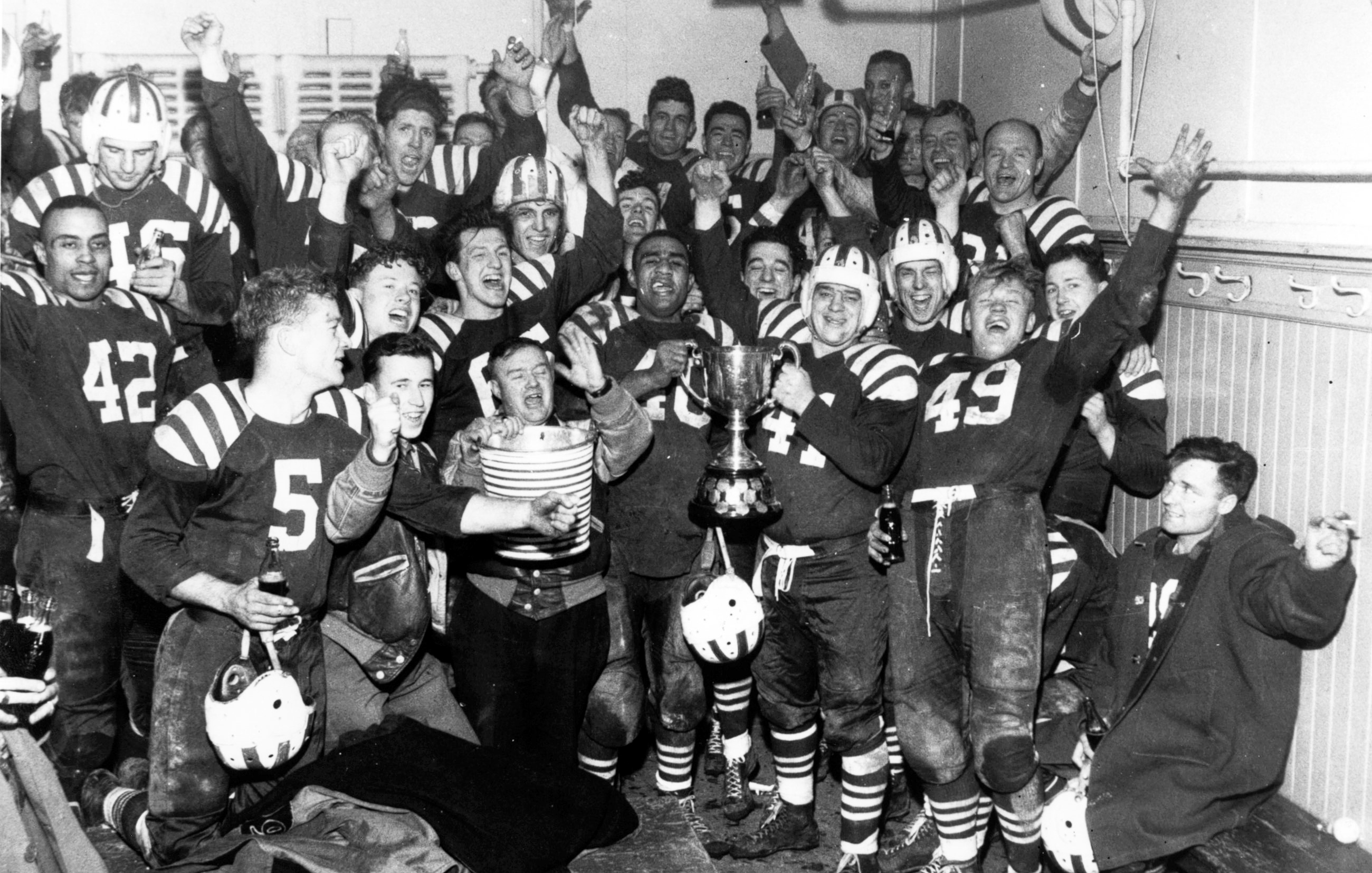 I have so many questions about just what went on in the Calgary Stampeders locker room soon after they won the 1948 Grey Cup. Let’s start with the stripes as this is the second part of my series on the CFL history of team’s uniforms. I love the idea that someone decided that these rather plain looking uniforms needed some pizzazz so why not add some red and white stripes to go with our red sleeves?  At least it matches the helmets. The real joy of doing this project is getting to dig around all these old photos and learn a little bit of the history of this game. This picture is fairly iconic as the 1948 Stamps after defeating the Ottawa Rough Riders 12-7 is still the only team in the history of the league to go undefeated.  Every member of this team has the right to celebrate as wildly as they see fit.

If I had to choose one player to party with it would be #49 Dave Tomlinson, a guard from McGill. Judging by that picture he’s had more than that bottle of pop in his right hand. Beyond wanting to know how late did the party go I’m both curious and afraid to know what is in that bucket that is being held up. Also this looks nothing like the pictures we see of team’s celebrating. I’m guessing ski goggles and bottles of Prosecco were harder to come by three years after the Second World War. 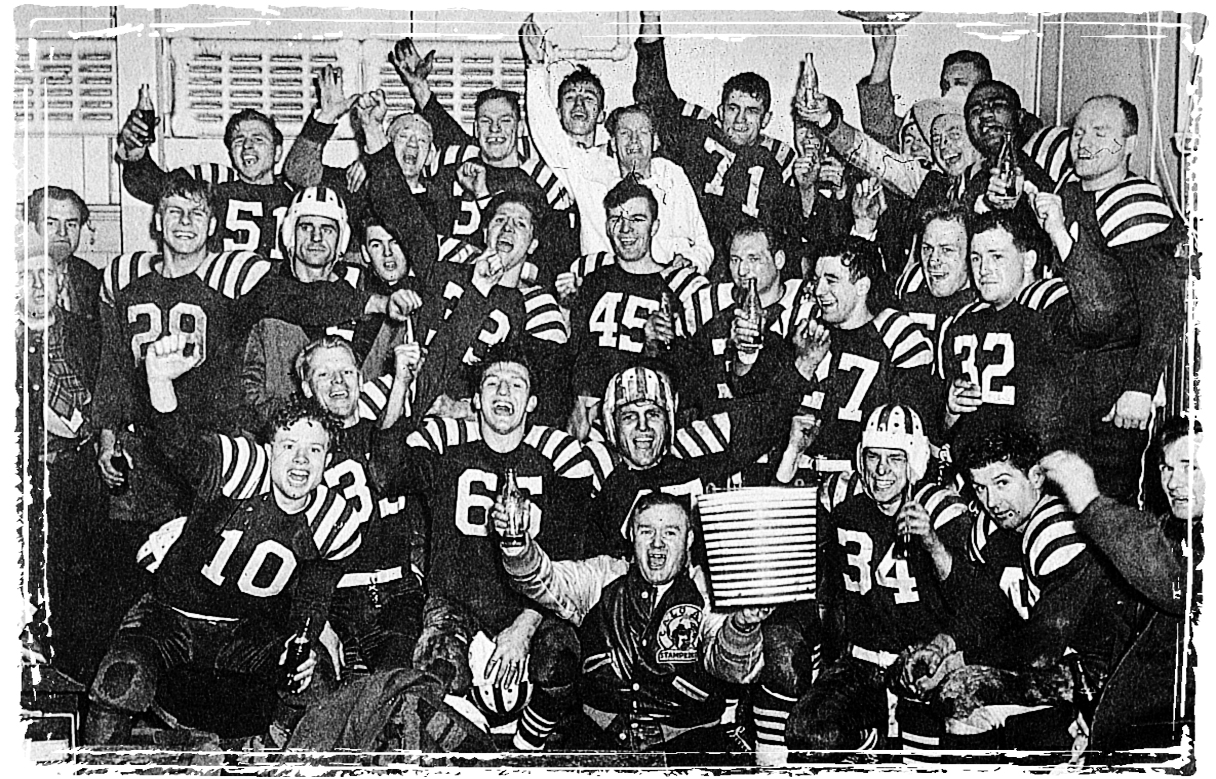 There’s the bucket again so prominently featured right in the front of all the celebrations! Was it a lucky bucket? Is that where they’re keeping all the gin? Can someone please help me here? I love #10, quarterback Harry Irving who nails the “We did it guys!!!! Boy oh boy” look. Halfback Jim Dobbin (#34) is clearly giggling because he thinks he has fooled everyone around him to think he’s sober. Finally tackle Jim McGill is already looking ahead to next season, check out how serious he looks compared to his teammates. 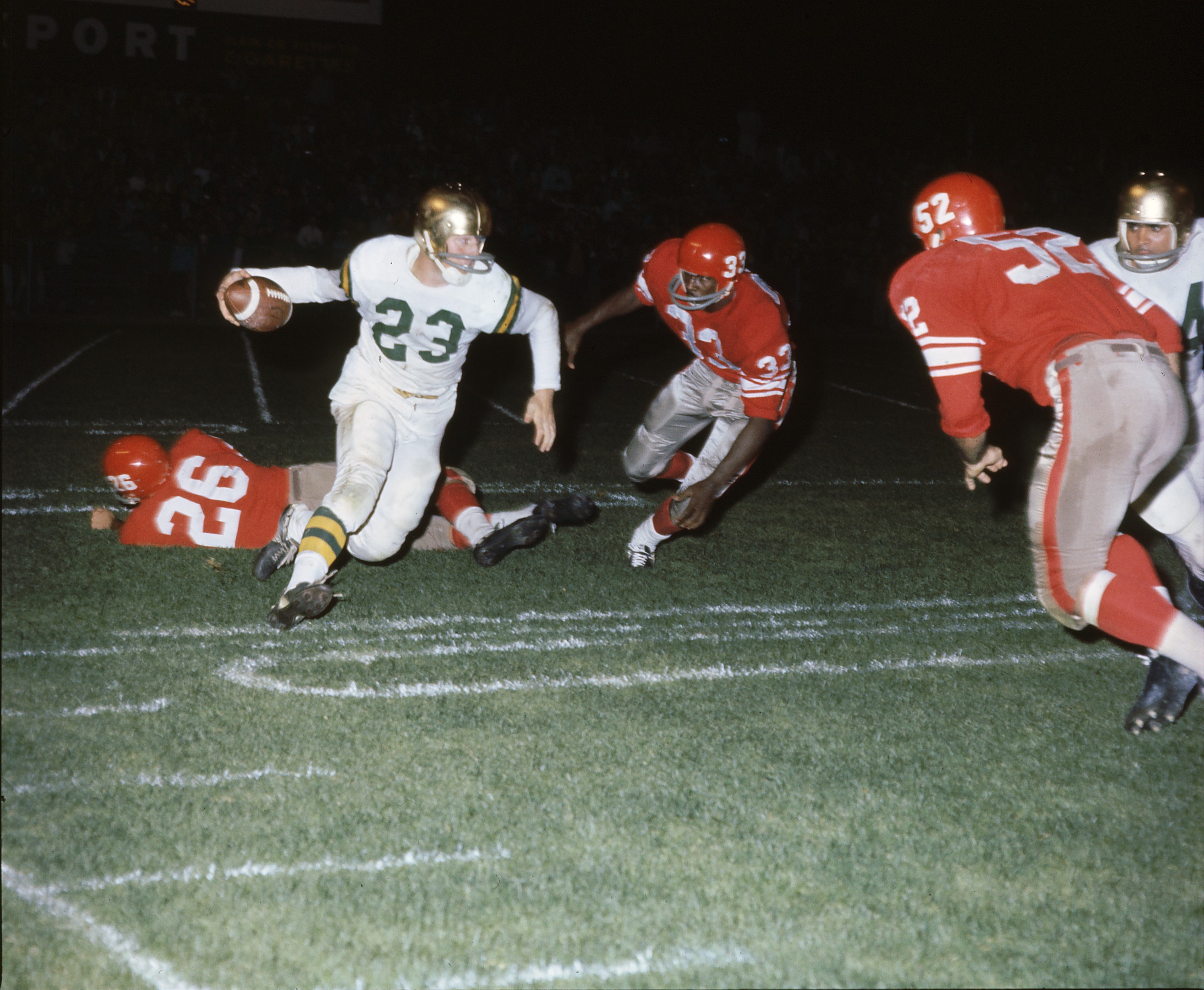 A staple of sports photography from another era is the nighttime shot that looks like it was taken by my Blackberry and its horrible flash option. These are just cool, simple uniforms that would be a hit for a throwback game. From a football perspective is anyone else concerned that #23 is going to fumble the ball? I bet his coach was not pleased with just how loosely he’s carrying the ball. I would also say his position coach isn’t thrilled with the ball placement but judging by how old this picture is I doubt there are many position coaches on any football team. 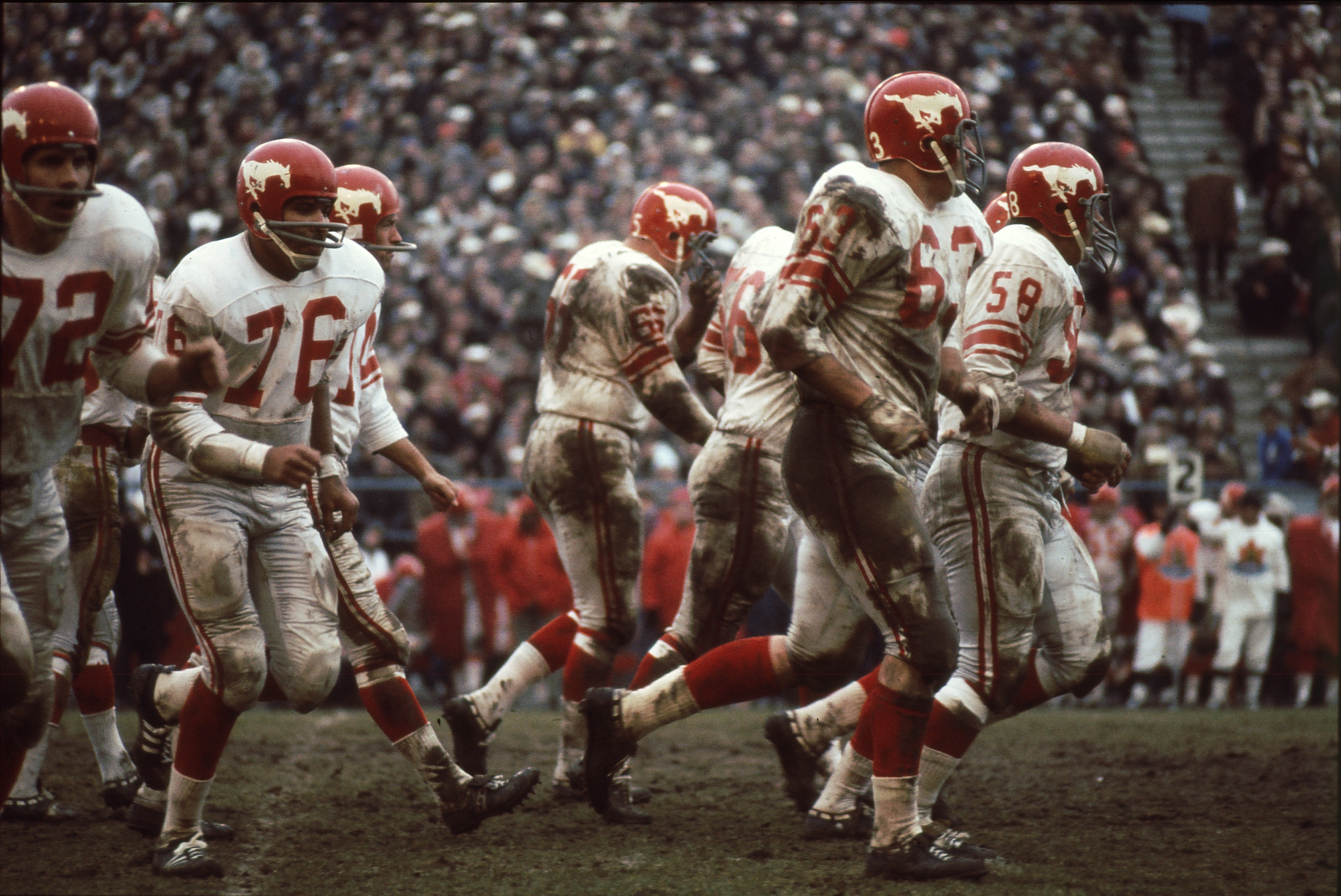 If you Google “What does throwback football look like?” this is the image you will see first. Give me a white uniform/mud combination any day. Judging by how dirty these uniforms are Calgary’s offensive game plan did NOT include many passes. It wasn’t until the late 1960’s that we saw Stampeders helmets adorned with the now famous white horse. 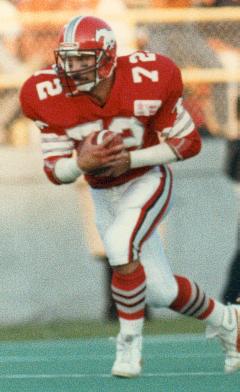 For all you CFL fans under the age of 40 say hello to Bernie Morrison (left) who in 1995 was a part of the Stampeders 50-year Dream Team.  Bernie led the team in tackles on three occasions and recorded 17 interceptions. I’m guessing this is one of those picks. I’m highlighting this picture because it is just odd to see a linebacker with the jersey number 72. Did Calgary run out of numbers in the 50’s? 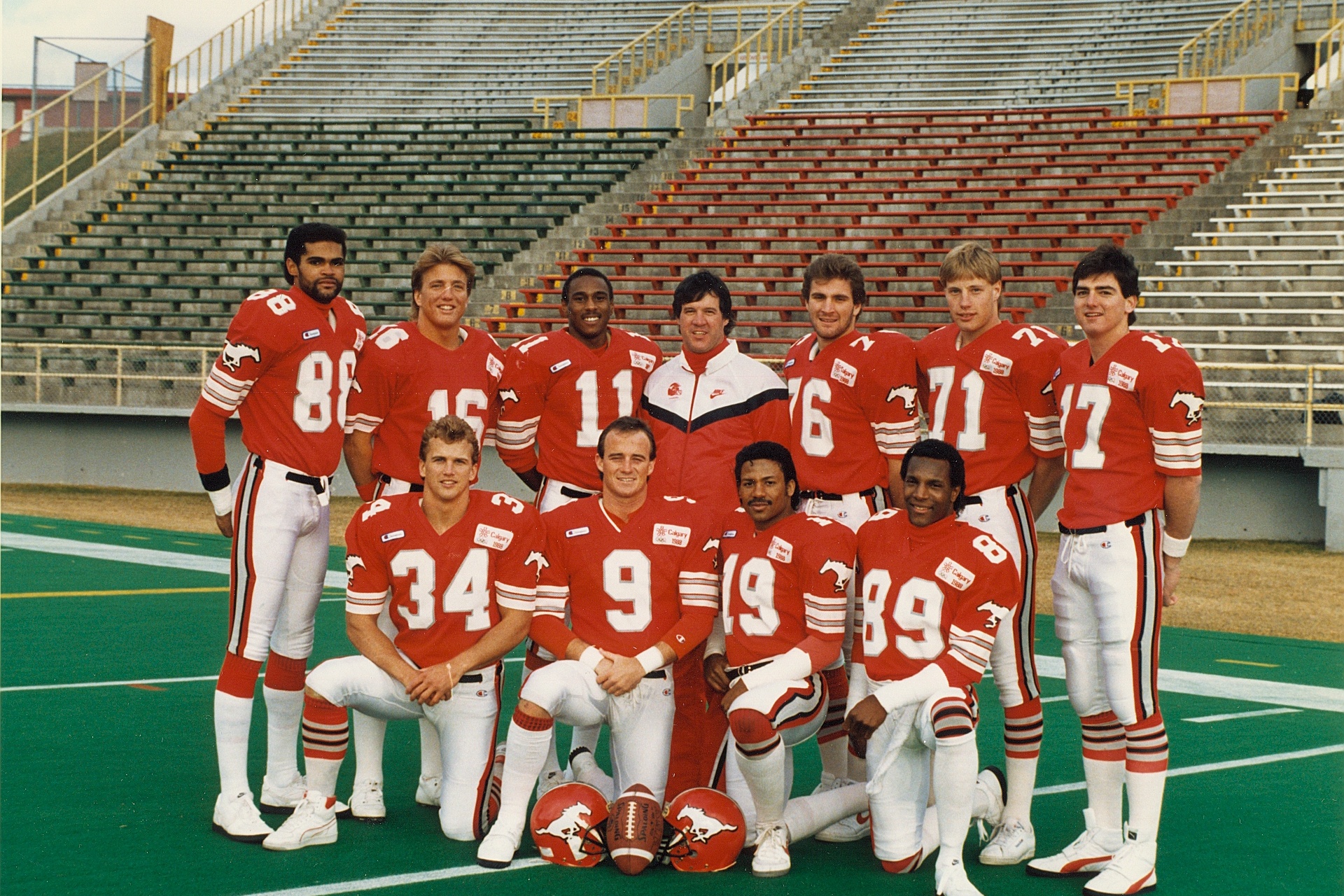 A little known fact about the 1987 Calgary Stampeders offence is they enjoyed well pressed pants and being left the heck alone on picture day. 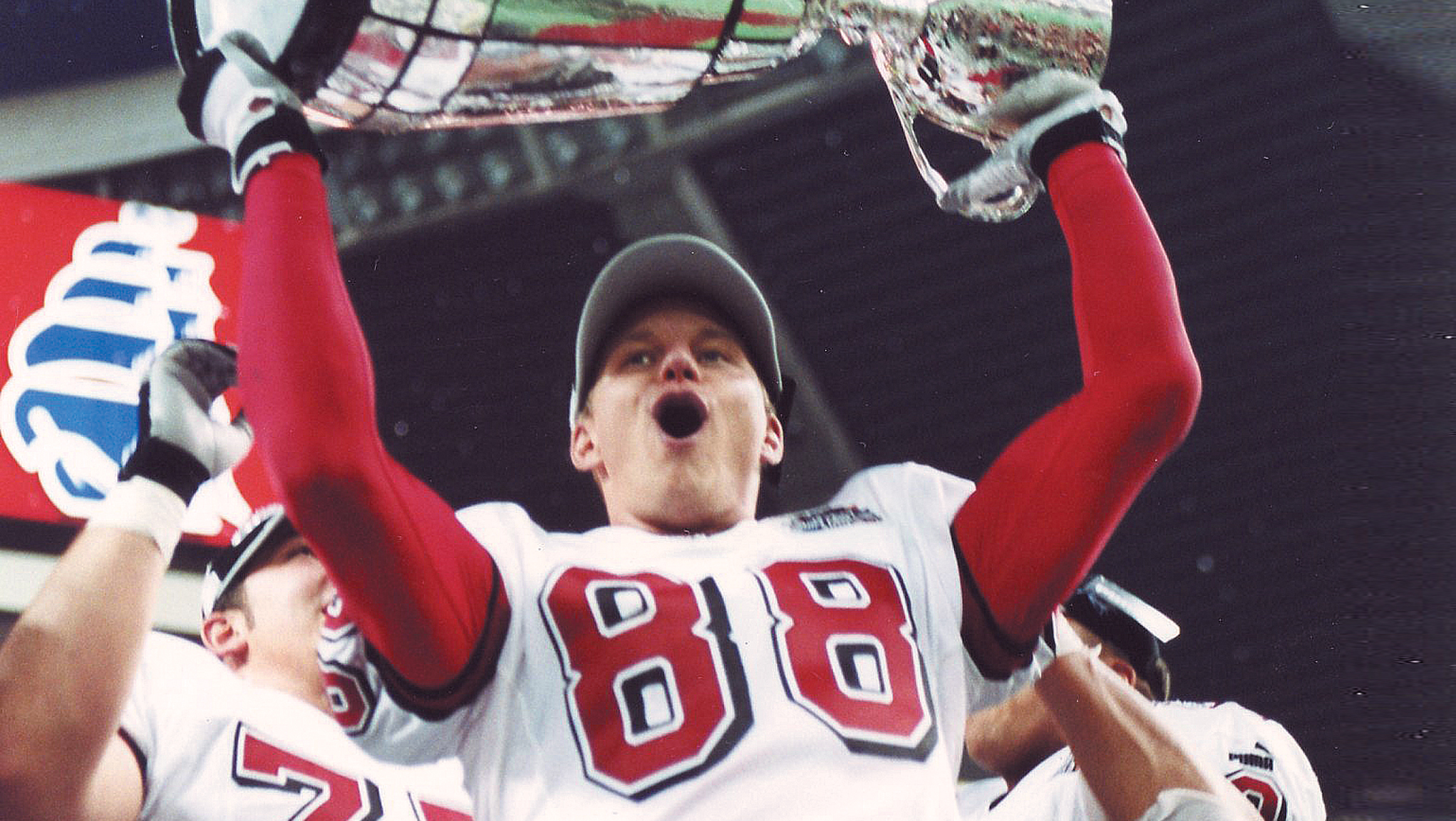 And the winner for the youngest looking 29-year-old who is about to turn 30 the very next day goes to Calgary receiver Vince Danielsen. The two time all-star should be thrilled as Calgary who finished the year 8-10 somehow defeated a 14-4 Winnipeg squad that had dominated the regular season. Do not mention the name “Marcus Crandell” to a Blue Bombers fan. 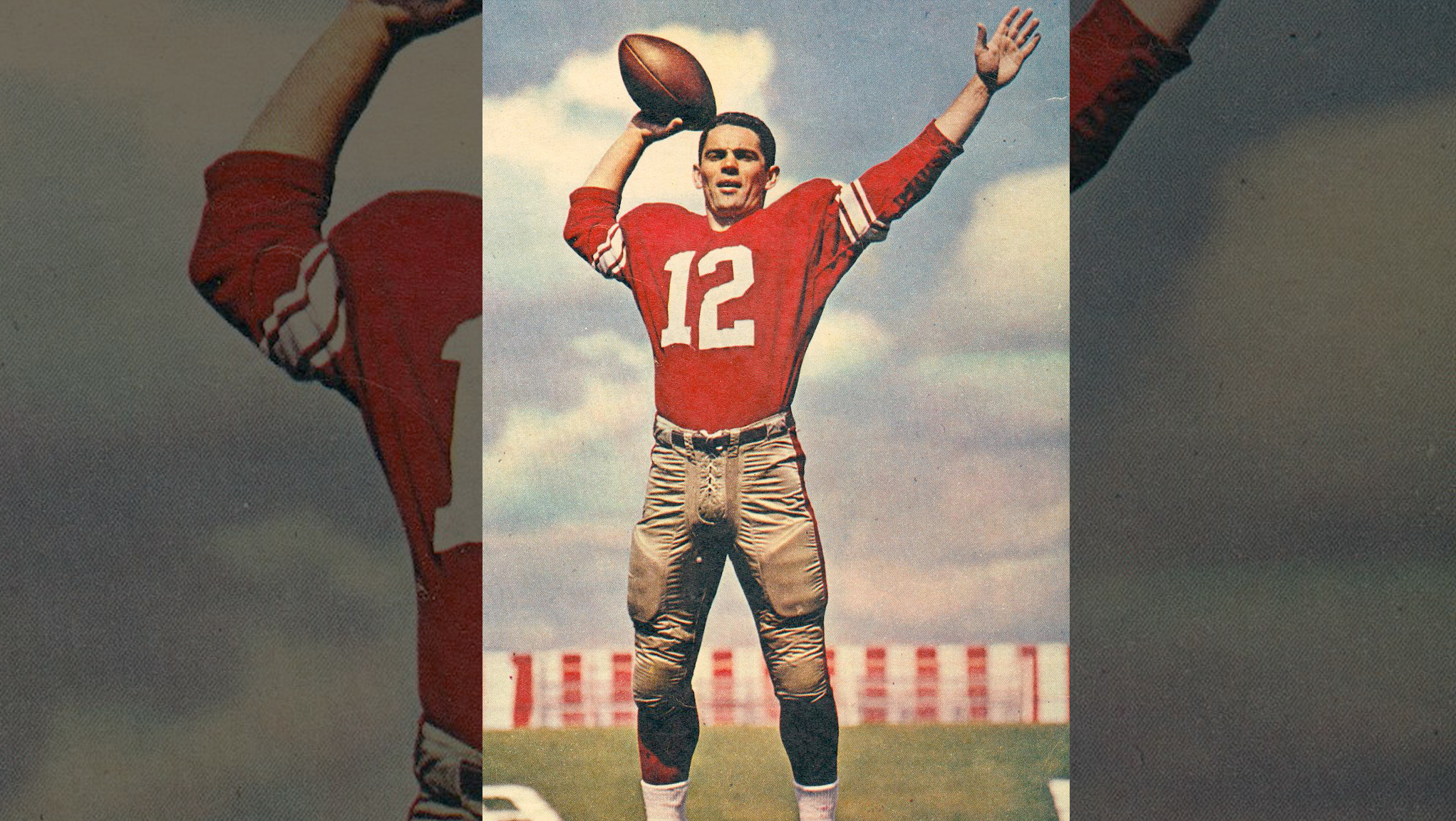 When things eventually go back to normal can we please bring back the quarterback jumping in mid-air pose? I don’t care that this is horrible footwork for a quarterback I want this to be a league mandated rule. Also is it ironic that for a quarterback whose name is Eagle Day he really does not get much vertical on this jump? 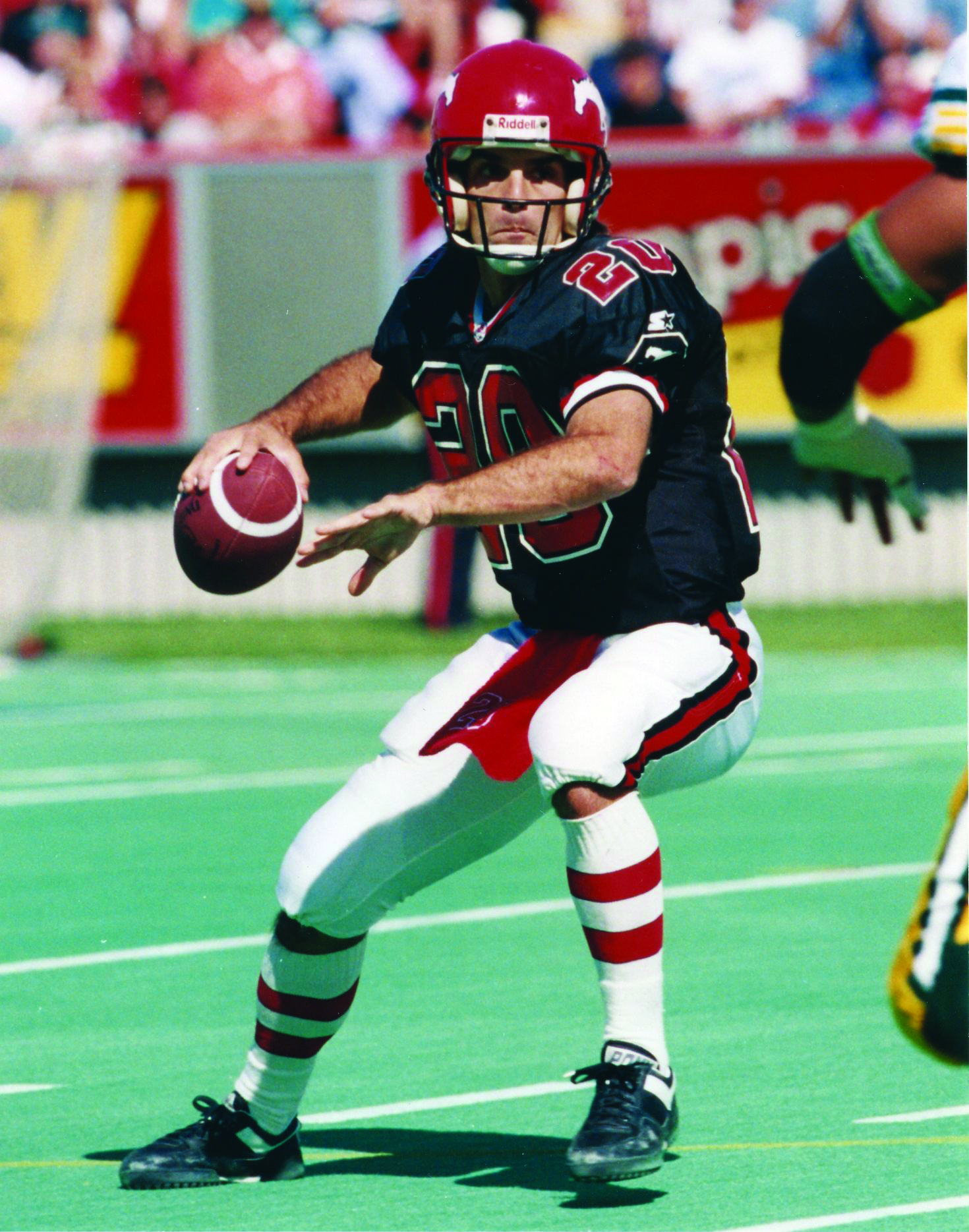 I know there will always be some debate about who the greatest CFL quarterback of all-time is. (I would be in the Doug Flutie camp) But can we all agree that no Hall of Famer had hairier forearms than Doug Flutie? 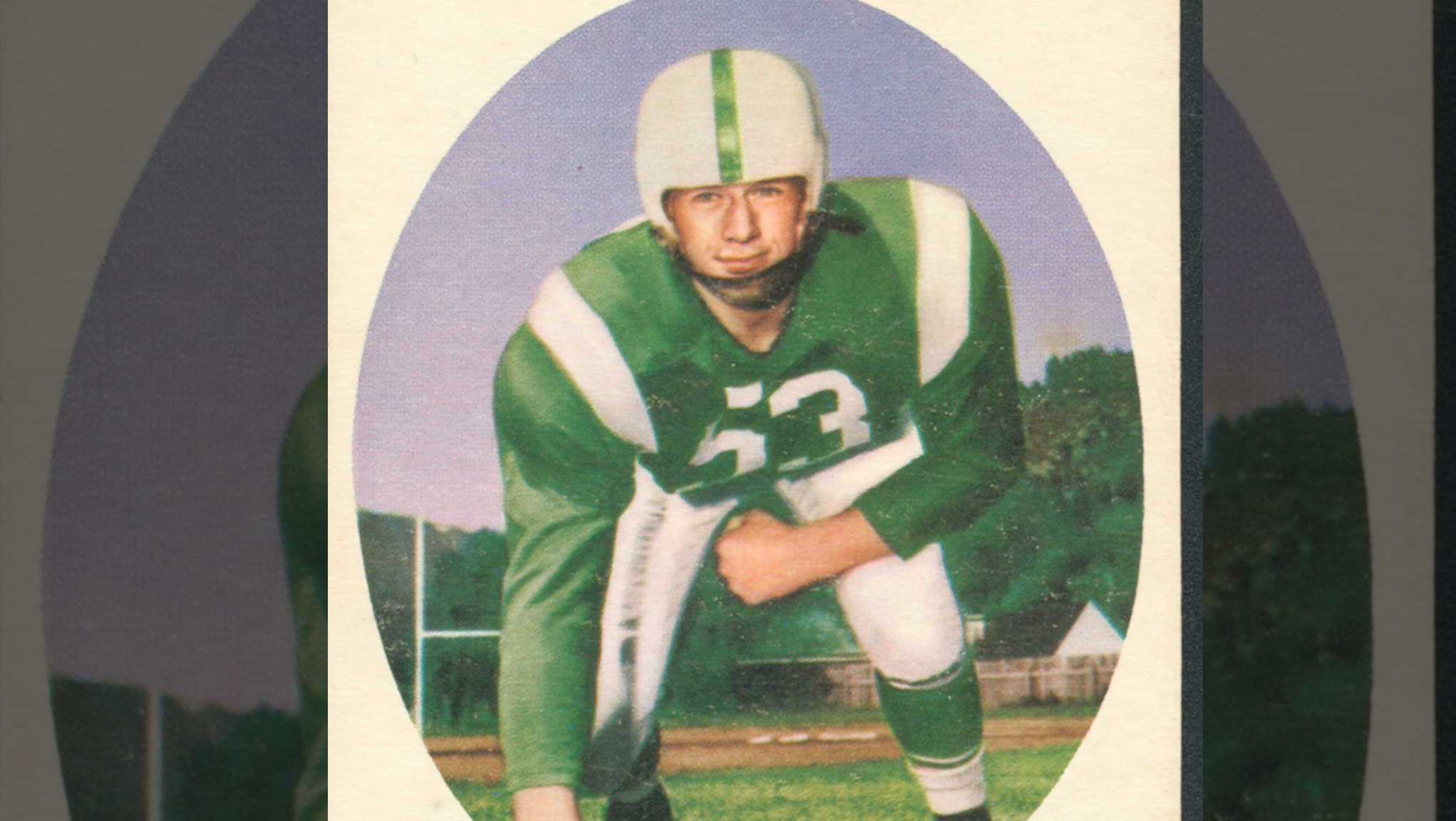 And over here you will find guard Harry Langford who made the All-Star team … wait why is this uniform Green and White? What is going on here? Is this some sort of Roughriders prank? I did some research and the best explanation that I read is that these are black and white photos that were improperly colourized by some clueless people at Topps. The problem would be resolved in 1966 and now let us never speak of this again. 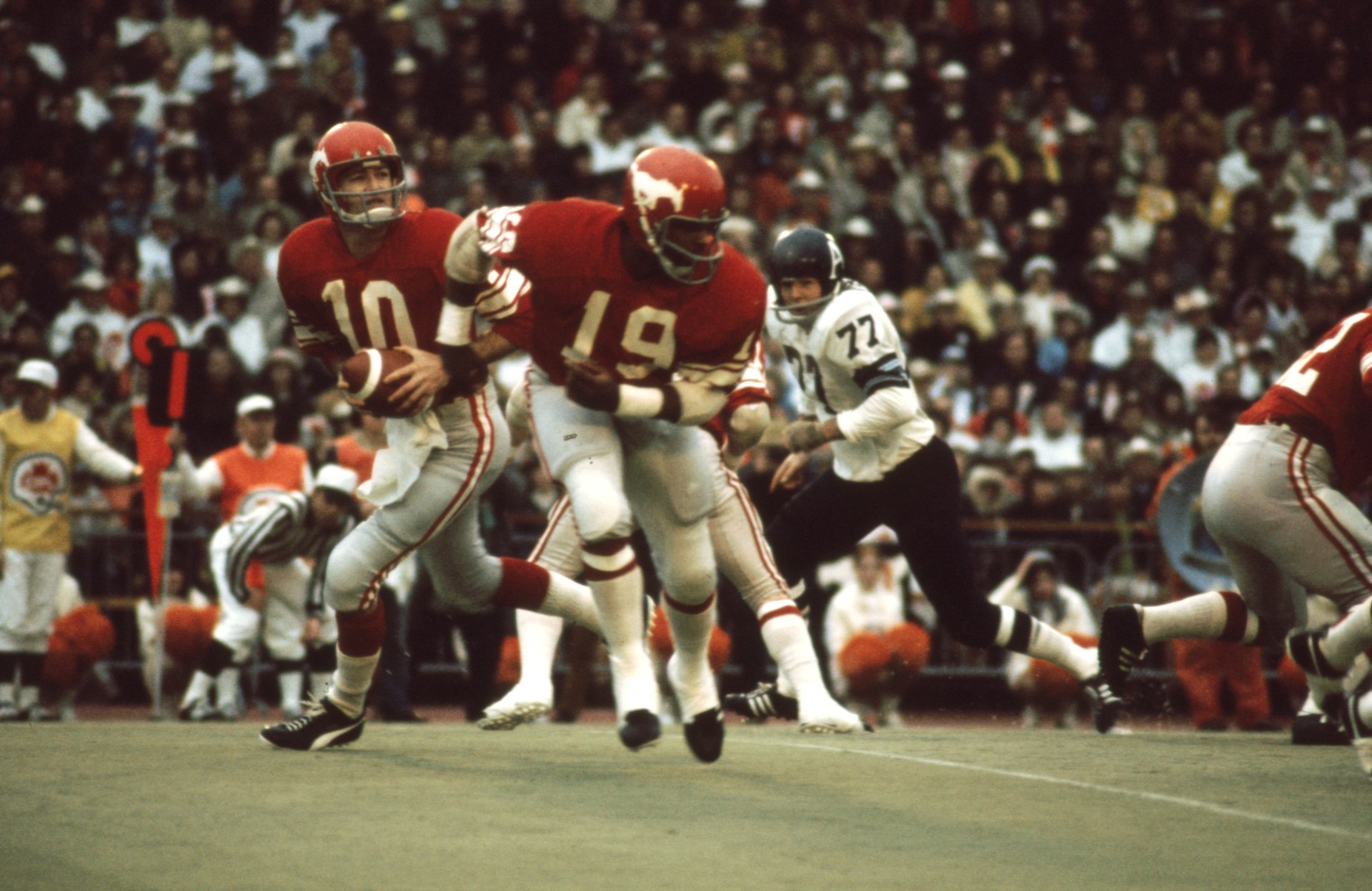 Judging by the silver pants worn by Hall of Fame quarterback Jerry Keeling this game against Toronto happened in the early 1970’s as Calgary players started wearing silver pants and silver accents to their uniforms during that time period. 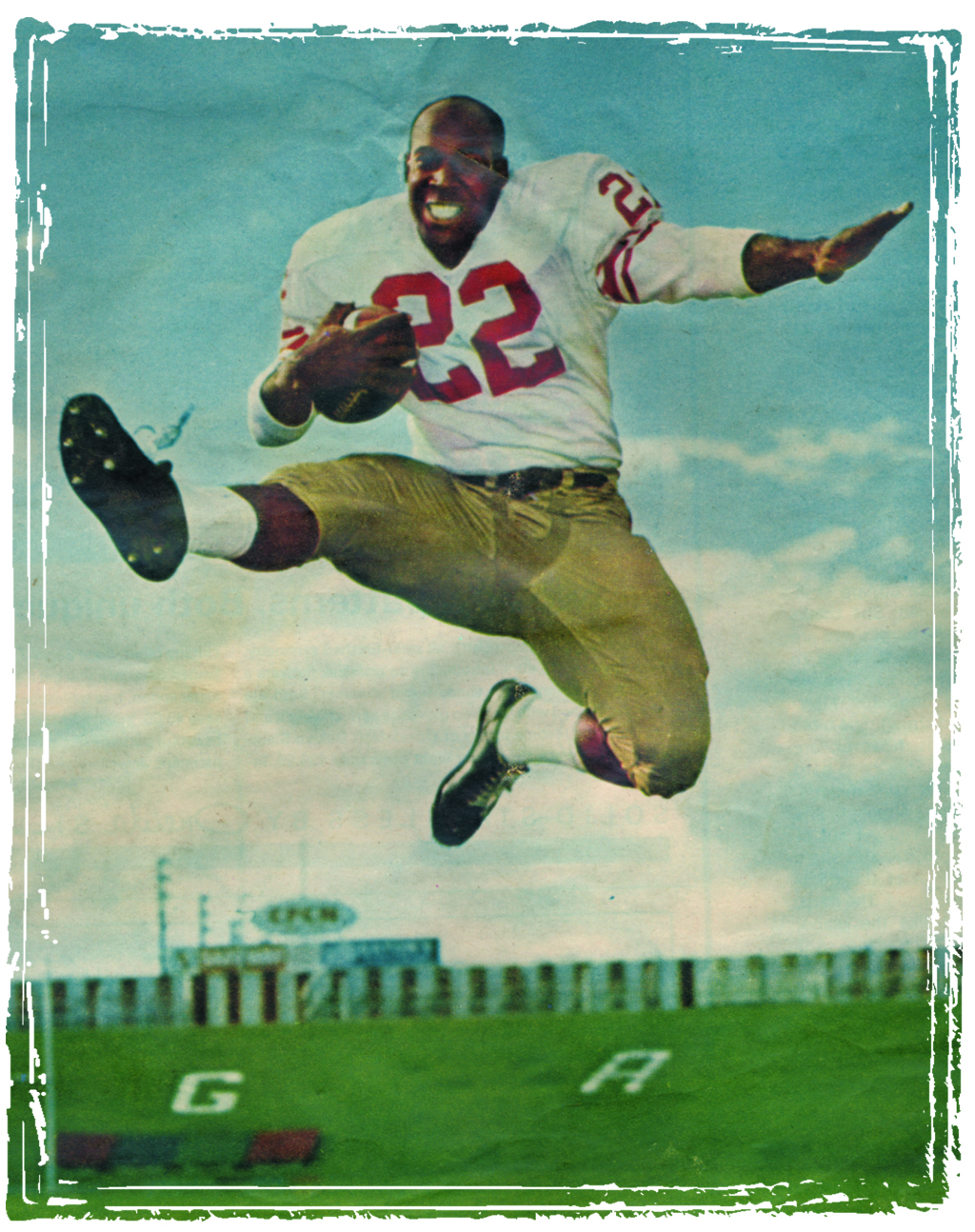 You want to know how you set the Calgary Stampeders record for rushing yards in a single game? By karate kicking as many linebackers and safeties as you can! This is my single favourite pose that I have found from my research. (Shout out to Mackenzie Trimper for all the help) You have the karate chop/Heisman pose, ball is firmly tucked in place, great smile and eyes wide open … this is the perfect picture. Good on Coleman for still owning that record (Plus he has the 3rd highest total as well) considering Calgary has seen Joffrey Reynolds, Kelvin Anderson and Jon Cornish bang out 1,000+ yard seasons and dominate from the running back position. 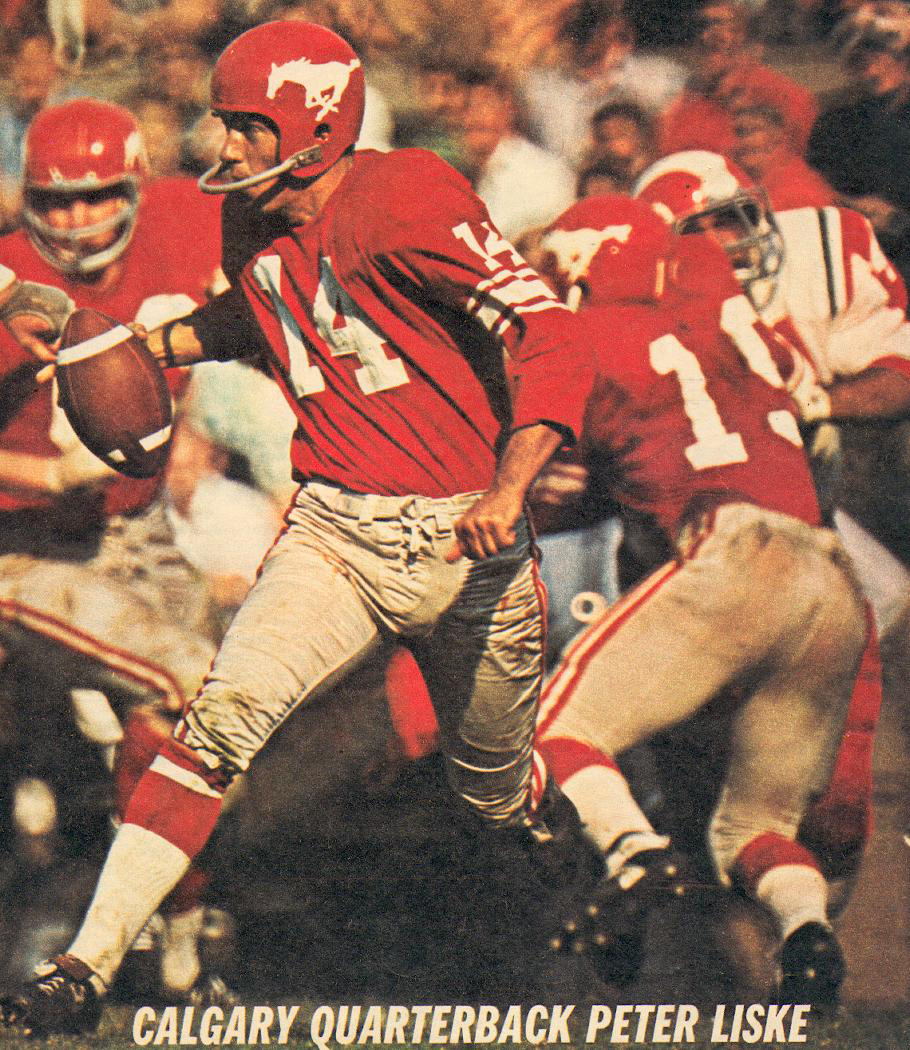 Time now for the weekly single helmet bar appreciation photo brought to you by “What the Heck Were They Thinking???” This one goes out to quarterback and 1967 MOP Peter Liske. Anyone can toss 40 or more touchdown passes in today’s wide open passer friendly game but imagine doing it in 1967 with a single bar helmet in an era when defences were allowed to get away with bloody murder compared to now. (Note: I’m cool with most of these protective measures!) No quarterback would throw for that number of touchdown passes until Mr. Hairy forearms Doug Flutie in 1993. As someone with a similar look I am allowed to make fun of Mr. Flutie. 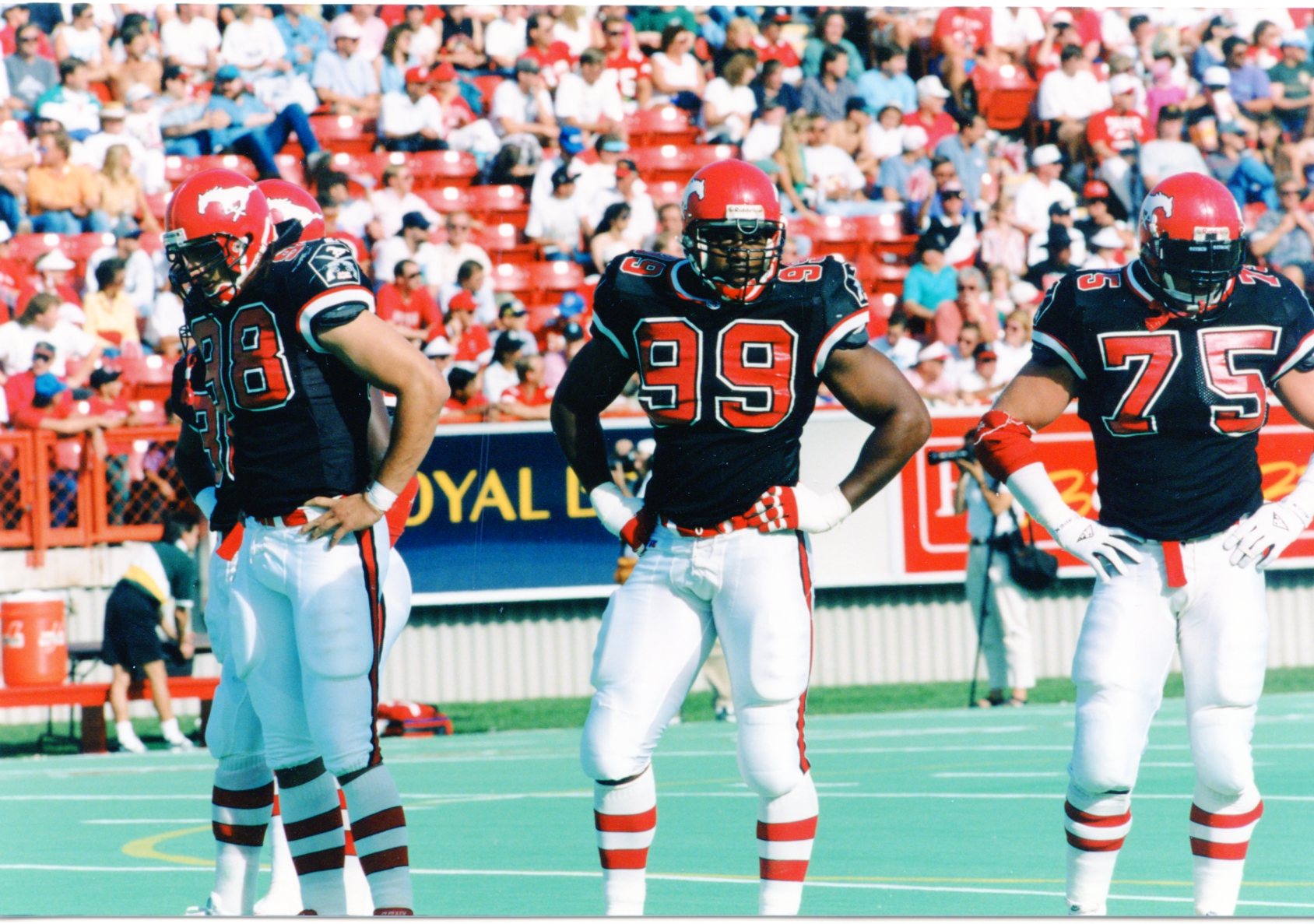 Let’s end it with the classic black top third jersey. Calgary was the first team in the league to make the third jersey a permanent part of the team’s rotation. This look was first seen in the 1994 Labour Day Classic. I have no doubt this intimidating red/black combination played a big part in the Stampeders winning that day, 48-15 over Edmonton.