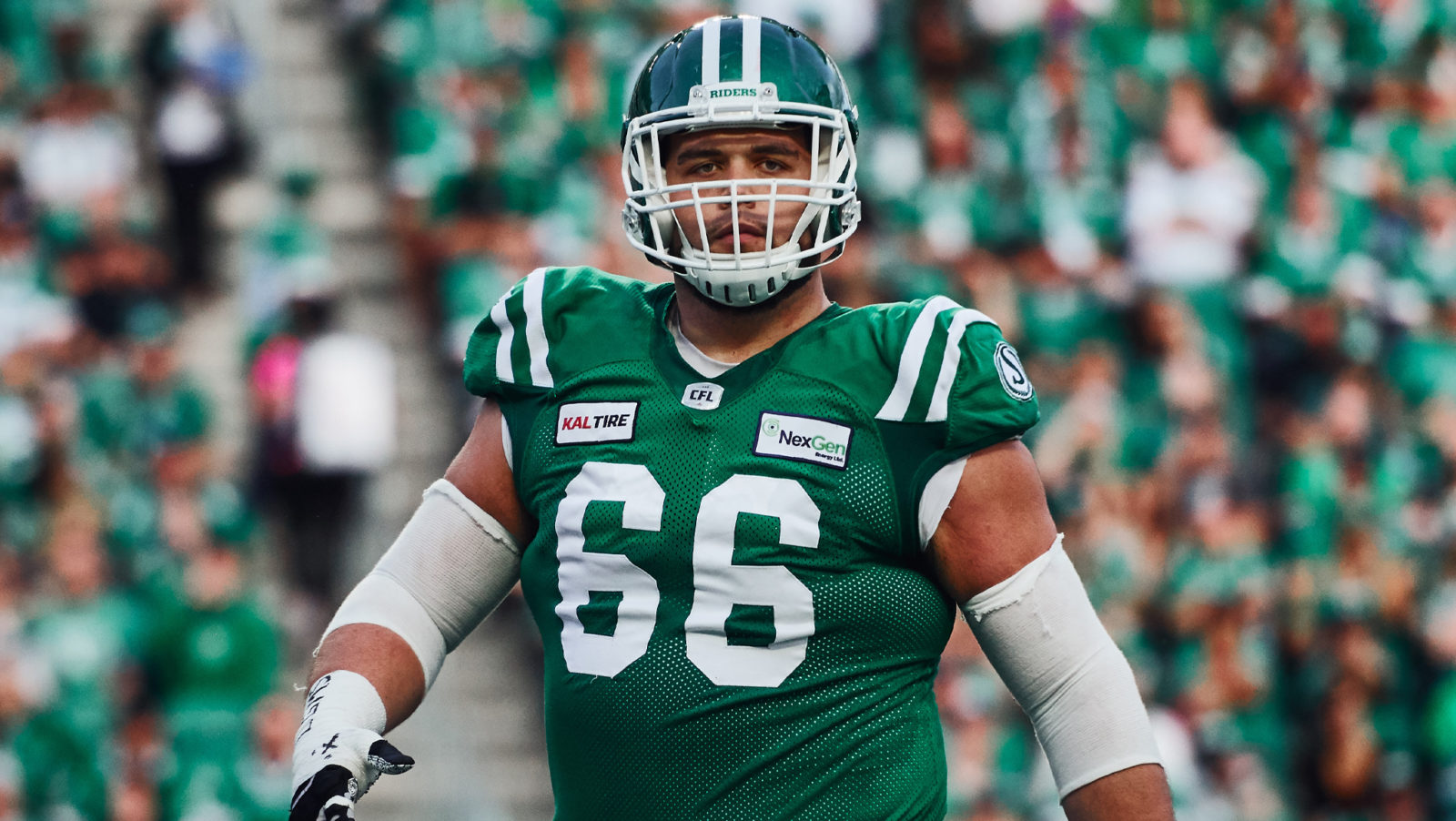 Kwemo, 25, played 17 games in Double Blue during the 2019 season, recording 13 defensive tackles and 16 special teams tackles, third most on the team. The 6’3, 235-pound linebacker was a second-round draft choice of the Argos in 2018 and tallied 15 special teams tackles in 11 games during his rookie season. The Montreal native played 28 games over four seasons at Queen’s University and registered 149 tackles, 15.5 tackles for loss, 9.5 sacks, three interceptions and two forced fumbles for the Golden Gaels. Kwemo was named First Team All-Canadian in his final year at Queen’s.

Okine, 30, played six games for Saskatchewan in 2019 after joining the team in July that season and tallied three defensive tackles. Before coming to the ‘Riders, the Florida native played for the Orlando Apollos of the Alliance of American Football where he recorded 17 tackles, five sacks and one interception in eight games. The 6’7, 290-pound DL also spent time with the Arizona Cardinals, Detroit Lions, Kansas City Chiefs, Indianapolis Colts, Brooklyn Bolts (Fall Experimental League), Orlando Predators (Arena Football League), Calgary Stampeders and Houston Texans between 2013 and 2018.

Sankey, 28, was signed to the Argos practice roster in late October of 2019. The 5’10, 202-pound running back most recently spent time with the AAF’s San Diego Fleet in the Spring of 2019, rushing 30 times for 119 yards over four games before the league suspended operations. Sankey was a second-round draft choice of the Tennessee Titans in 2014 and the first running back off the board that year. Over two seasons with the Titans (2014-2015) Sankey rushed 199 times for 762 yards and three touchdowns while adding 32 receptions for 272 yards and a touchdown in 12 games. The native of Wadsworth, Ohio spent the 2016 season on the practice rosters of the New England Patriots and Kansas City Chiefs. After being picked up by the Minnesota Vikings, Sankey suffered a season-ending injury in the first preseason game of 2017, ending his season.

The former University of Washington Huskie had an illustrious career at the Seattle-based school rushing for 3,496 yards and 37 touchdowns and adding 67 receptions for 567 receiving yards over three seasons (2011-2013). Sankey was named First Team All-Pac-12 and a Second Team All-American after his junior season in 2013 after rushing for 1,870 yards, a single-season record, and 20 touchdowns. The running back left as the school’s leader in rushing touchdowns and third all-time in rushing yards.

Sheperd, 6’1 and 195-pounds, was a member of the Indoor Football League’s 2019 Champion Sioux Falls Storm, where he recorded 874 receiving yards and 17 touchdowns over 14 regular season games. The St. Louis, Missouri native caught six passes for 115 yards and one touchdown in the IFL Championship game. Sheperd spent 2018 playing for the Sioux City Bandits of the Champions Indoor Football League where he caught 30 passes for 506 yards and 14 touchdowns. The receiver also earned a Carolina Panthers rookie camp invite coming out of college in 2016. The former Oklahoma State Cowboy spent four years in orange and black (2012-2015), hauling in 77 passes for 1,284 yards and 10 touchdowns in 38 career games.

Powell, 6’1 and 204-pounds, was signed an as undrafted free-agent by the Chicago Bears in 2019 and attended rookie mini-camp with the NFL team. The New Jersey native was a defensive standout for four years (2015-2018) at Division III Widener University in Pennsylvania. Powell was twice named First Team All-MAC (2017-2018) and was the conference’s Defensive Player of the Year in 2017 after setting a new NCAA Division III record for defensive touchdowns with six. He finished the year with 53 tackles, 11.5 tackles for loss, two and a half sacks, four fumble recoveries, two forced fumbles and six interceptions. For his career, the DB accumulated 137 tackles, 23.5 tackles for loss, four and a half sacks, eight interceptions, five fumble recoveries and two forced fumbles in 39 games.

Allen, 26, most recently spent time with the St. Louis Battlehawks of the XFL at the beginning of 2020. The 6’2, 290-pound offensive lineman spent parts of 2019 with the Green Bay Packers and Chicago Bears after spending all of the 2018 NFL season on the Bear practice roster. The Compton, California native played four seasons at the University of Hawaii (2014-2017) where he played 50 games, starting 49, and was named First Team All-Conference after his Senior season and Second Team All-Conference after his Junior season.