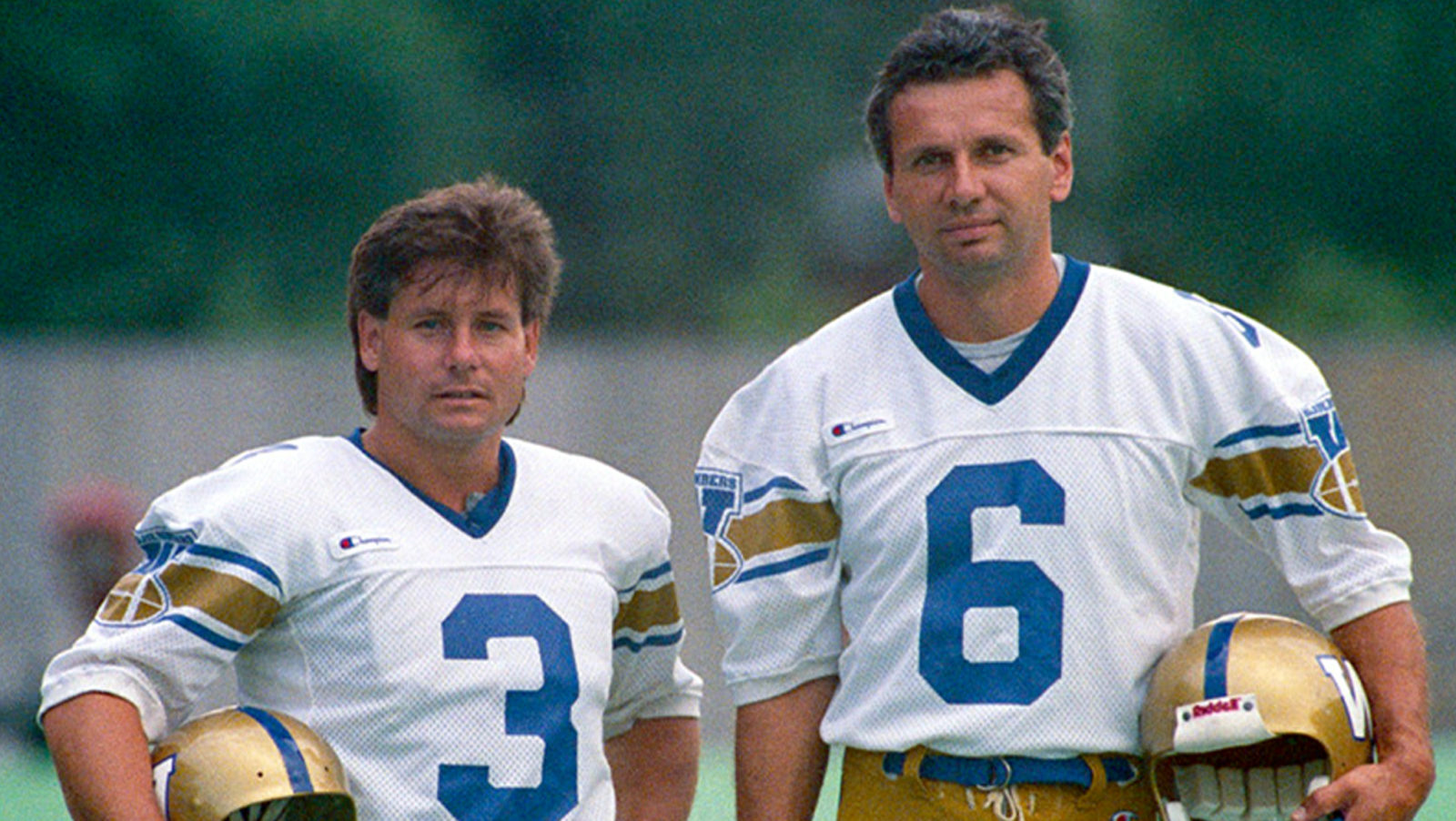 Uniform changes! It’s one of those issues that in the grand scheme of things that means nothing but yet is always great fodder for sports debate. Whether it is that snazzy new third uniform or some sort of alternate home uniform with dark accents for a more intimidating look, fans always have an opinion, usually a negative one. In my research of the Winnipeg Blue Bombers uniform history there was one common complaint: lightning bolts.

In 2012 the franchise made a decision to get rid of the lightning bolt pattern that was all over the uniform and replace it with a simple “W.”

Even Winnipeg Bombers kicking legend Bob Cameron was anti-lightning bolt. I found this quote from a 2012 Winnipeg Sun article:

“I never really took to the lightning bolt myself. I like this better. But as a punter, you’re not really into fashion and I’m not a fashion expert … When you’re actually playing, it doesn’t mean a whole lot. But, for the fans and everyone, I think this is classic Winnipeg Blue Bombers and that’s what everyone wants to see. It’s like the Montreal Canadiens logo never changes and I’d like to see them keep this for another century.”

If Sir Cameron is against it, who are we to disagree? 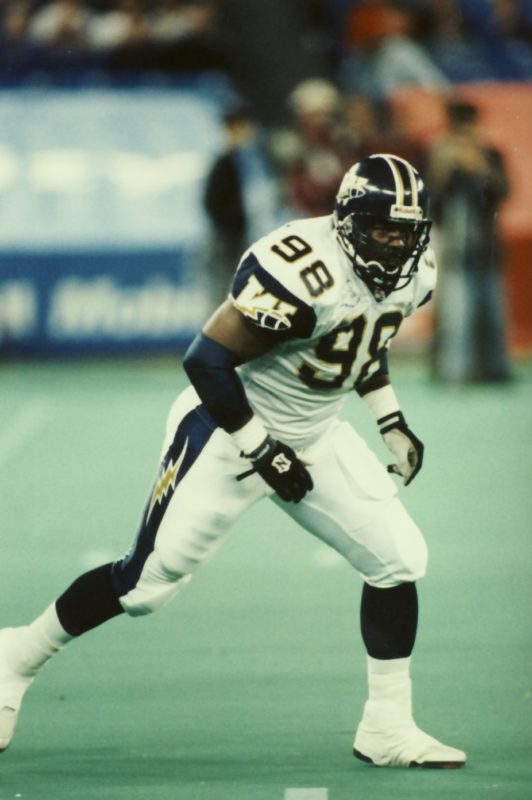 So then eight years later how should we feel about the Lightning Bolt Era (LBE)?

Here is little known defensive linemen Junior Tagoai who typifies the “never judge a book by its cover” cliché. I mean, check out Tagoai. He looks like he’s about to cause some serious trouble for an opposing offensive line yet he only played one year for Winnipeg. His career in the CFL lasted just two seasons. I will admit the lightning bolt on his leg is a bit distracting. To be honest, he looks like he should be singing ‘Greased Lightning’ next to John Travolta in ‘Grease.’ 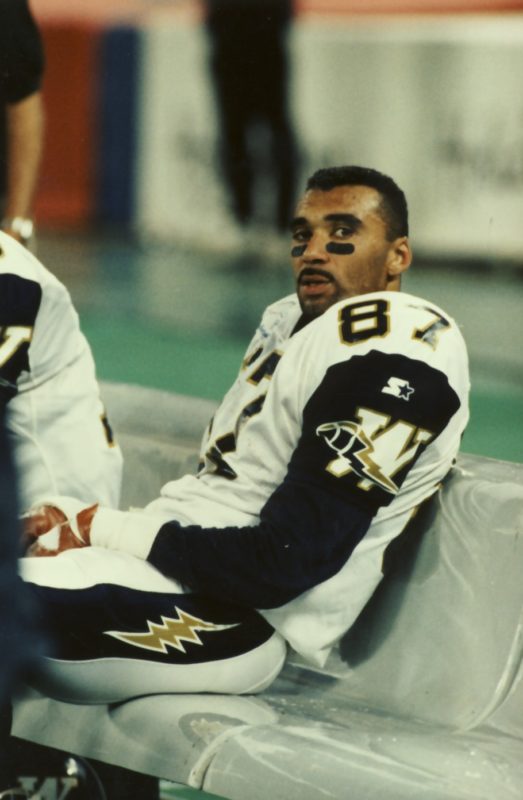 Now let’s take a look at the 1994 CFL’s Most Outstanding Canadian Award winner Gerald Wilcox.  Yup, upon further inspection, Winnipeg was right to get rid of the lightning bolt. It feels like a novelty, an unnecessary decoration that really served no purpose beyond trying too hard to look cool. The move to the straight forward ‘W’ imagery makes sense as it reinforces the identity of the city with its football team. At least that how I see it, but what do I know, I’ve been known to wear white after Labour Day? Man, I miss Labour Day football!! 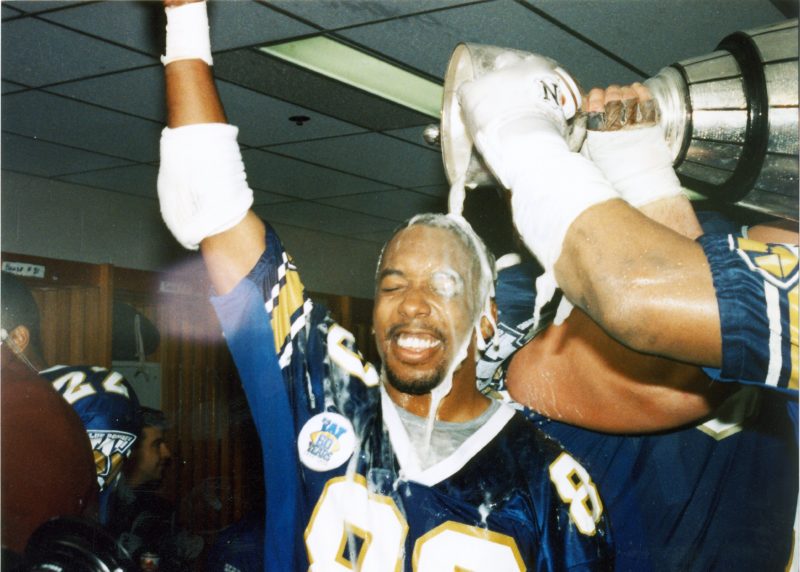 I’m always a big fan of photos of pure, unadulterated joy. Receiver Eric Streater will never be the most recognizable Bomber alumni but he was an important piece in 1990 after James Murphy (Four-straight season averaging over 1,100 yards before 1990!) was hit with the injury bug. Streater scored a remarkable 12 touchdowns on just 54 receptions and here he is rightfully celebrating the team’s 50-11 Grey Cup beat down of Edmonton. If I may have one minor nit-pick when it comes to the reporting of a victorious locker room. Would it be too much to ask to find out exactly what they are drinking/pouring over their heads? Is it actually champagne or some other sparkling wine like Prosecco? Is it beer? And if so can I get a specific brand? Is that really asking too much? All right, maybe it’s just me. 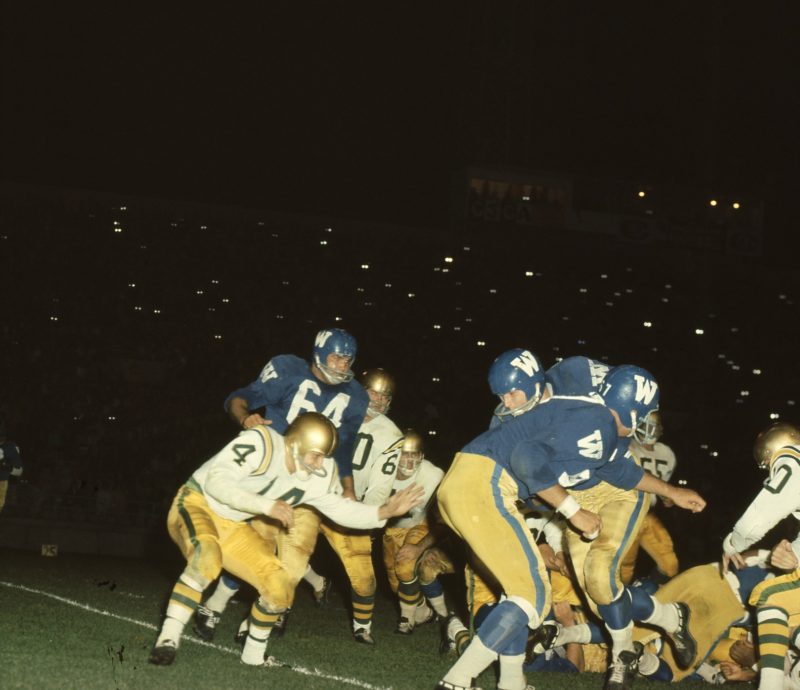 I am including this picture less because of the uniforms, though we can all admit that ‘W’ looks sharp, and more because of the general chaos going on. I’m seeing one block in the back by #64 of the Bombers and it also looks like there is some serious groin trauma being unintentionally inflicted among two Winnipeg teammates right at the front of this picture. Finally with this game being played at night, look at how creepy this picture is. I can’t tell if it’s actual humans in the stands taking in this game or aliens or racoons with night vision goggles. Whatever is going on I would recommend to both teams to not look at the “fans.” 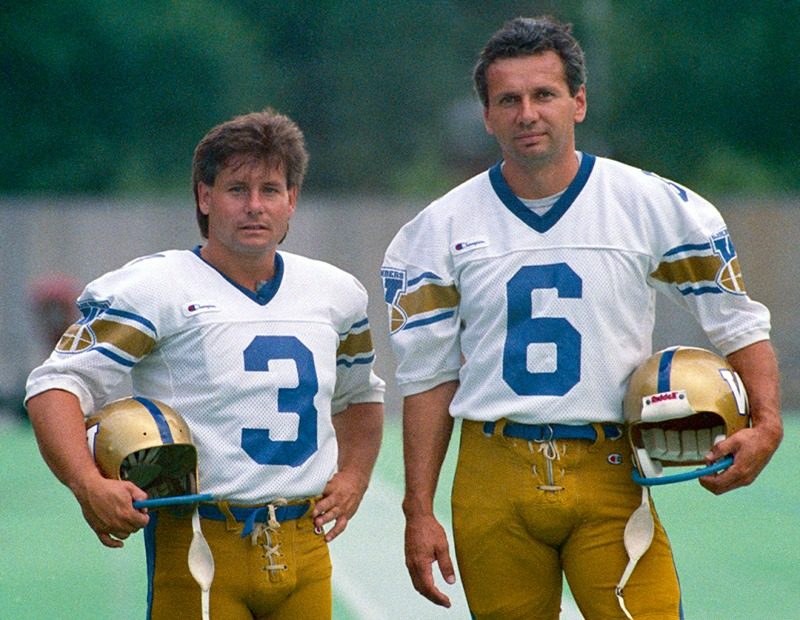 Now for quite possibly my favourite picture in this entire series, the most impressive kicker/punter combination in CFL history: the great Trevor Kennerd and the all-timer Bob Cameron. Judging by the lack of lightning bolts, this picture is from the 1980’s and the hair certainly confirms that. These guys look like they’re going to star in some 80’s cop show on ABC. All we need to do is change their names from Trevor and Bob to, say, Hunter and Damien. I’m just deciding which one plays by his own rules and which one does policing by the book. If I was being snarky, I’d say we’re looking at the “after” shot of a Hair Club for Men commercial but as I am not the sort of person that goes after low hanging fruit I will not make that joke. 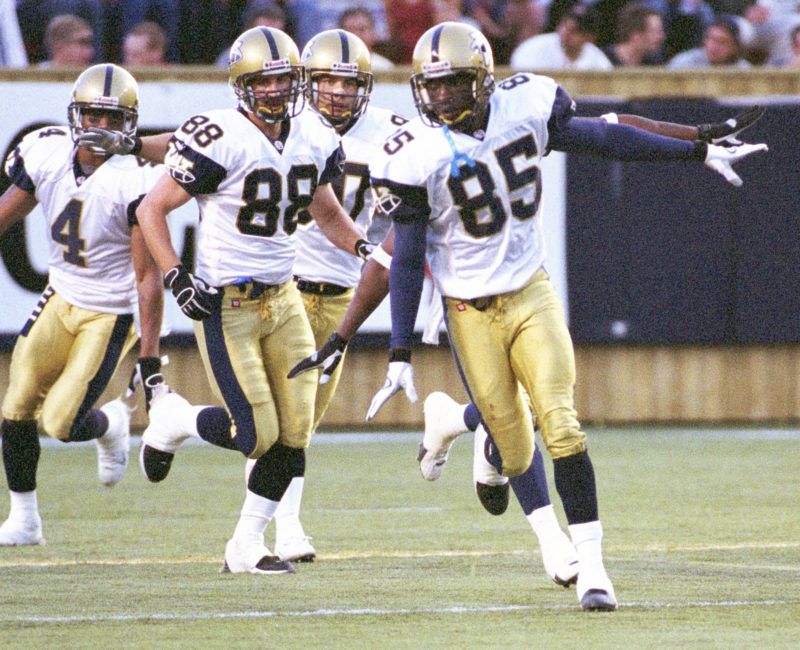 In my mind this is how I will always imagine Milt Stegall: in a sleek uniform looking like he is about to take flight at any moment. We all know that when the ball was snapped you could often find him up in the air doing amazing things. 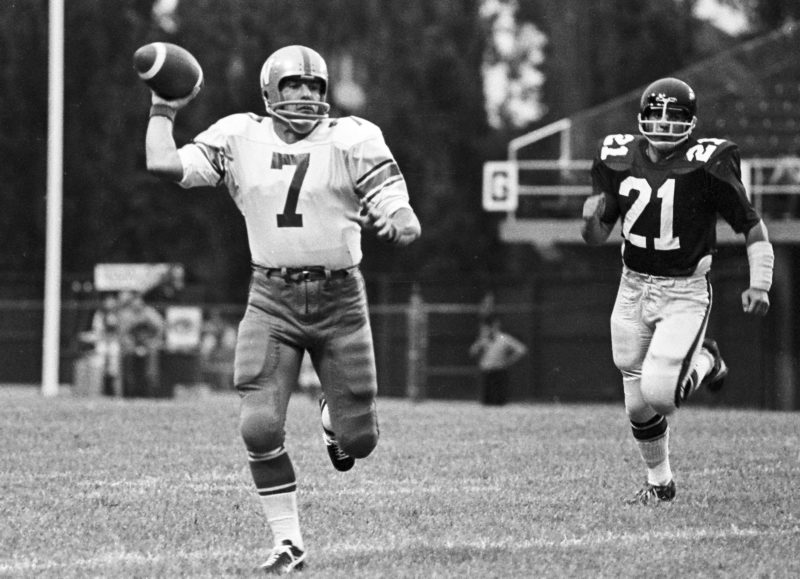 You know how I talk all the time about my favourite part of writing this uniform series has very little to do with fashion but everything to do with history? Welp, that is 100 per cent the case when it comes to former Winnipeg Blue Bombers quarterback (and kicker!) Don Jonas. His uniform is classic early 1970’s, heavy on the thigh pads, light on the colour scheme. This is a meat and potatoes outfit but you’ll find his story is anything but ordinary. You can read about his short lived but extraordinary CFL career here but let me give you a quick Coles Notes edition.

Don joined the CFL at the age of 32 with the Toronto Argonauts for one year before Joe Theismann arrived on the scene. The next year he hooked up Winnipeg and suddenly out of nowhere he produced a 4,000-yard passing season, becoming only the fourth passer at that time to hit that milestone. How many quarterbacks in their 30’s enter a new league, get dumped by their first team after one year and then suddenly put up those sorts of numbers in their sophomore season? Even more impressive is the fact that before his arrival, Winnipeg had won a total of 12 games in the previous four years but with Don under centre the team managed to make the playoffs in Jonas’ first two seasons. Sure, he never elevated the Bombers to great heights but he helped get them out of the basement. On top of all that he was also their starting placekicker as well! For such a short career it certainly was a memorable one.