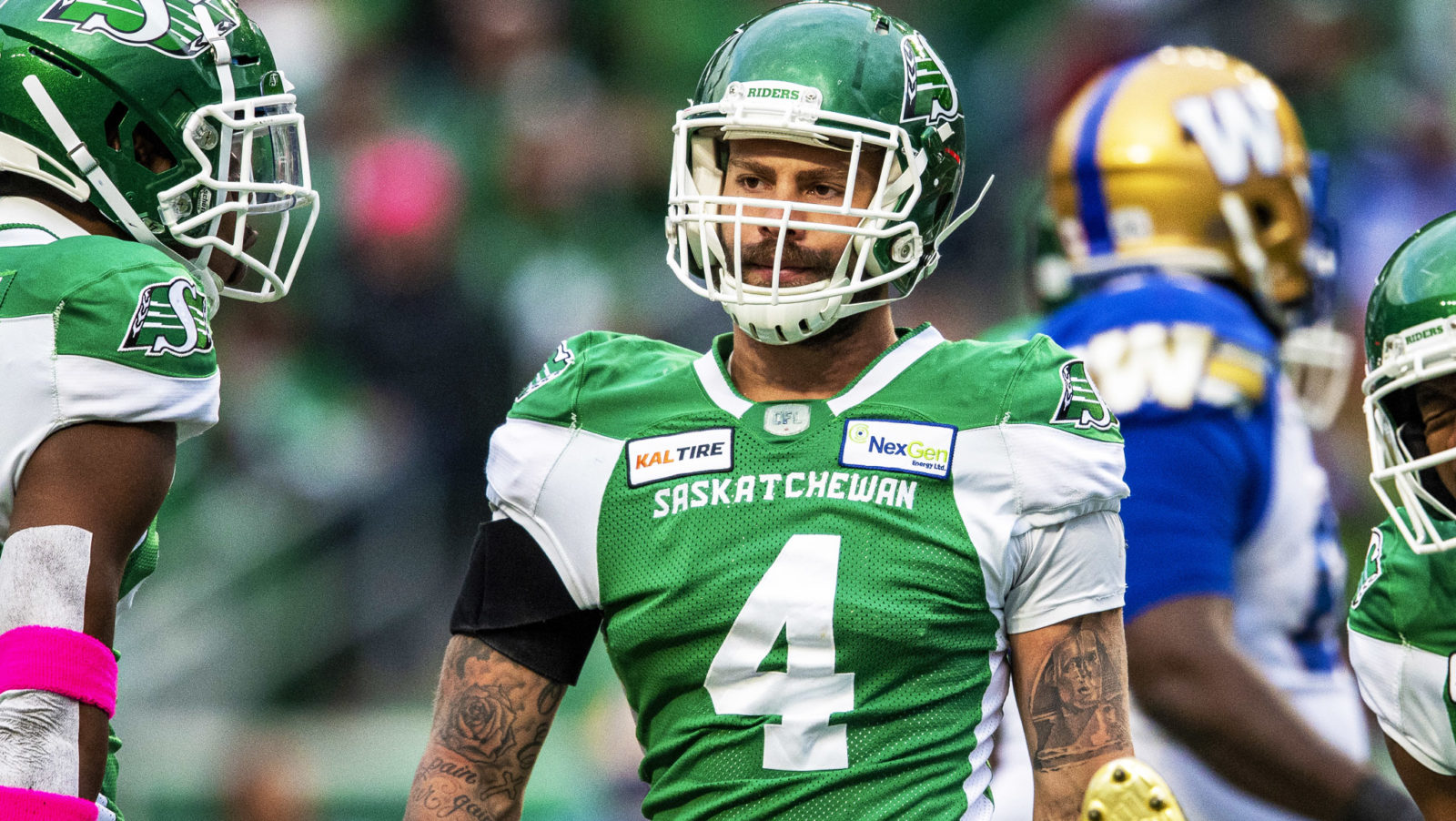 When you look across the free agent landscape heading into February 9, you can’t ignore the amount of quality Canadians still holding expiring contracts.

General Managers around the league should be licking their chops with a negotiating window coming at the end of the week to start trying to entice these players to move.

But this year with every top-end player, there comes a value option along with them. Here are my top 10 Canadian pending free agents, with a secondary option if you can’t land the big fish at that position.

Yes, Muamba bounces around the CFL, but he always performs wherever he lands. 100 tackles is his standard and every team would benefit by having a Canadian middle linebacker to lock down the middle of the defence. And there are plenty of teams who are still having holes to fill at linebacker so it will be interesting to see if Muamba moves on to the highest bidder. 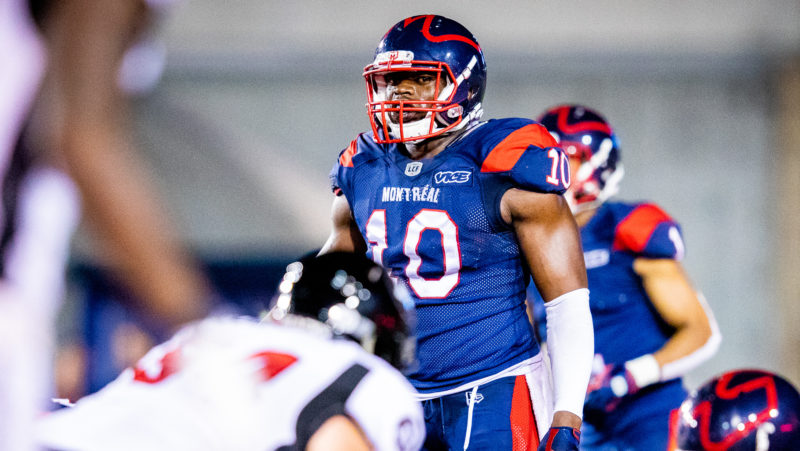 Will Henoc Muamba stick with the Montreal Alouettes or decide to hit the open market on Feb. 9? (MontrealAlouettes.com)

Next man up: Bo Lokombo – Playing alongside Muamba, Lokombo got to work with one of the top Canadian linebackers after working alongside Solomon Elimimian in BC the last few years. He’s had 51 and 71 tackles in the last two seasons, so Lokombo can produce.

Cameron Judge lost to Muamba as the top Canadian in the CFL in 2019, but comes in with a different game. He is able to cover a bit more of the field and can mix and match a few linebacking positions. He had a career-year in his third season as Judge has improved every single season and is showing he could be about to take off as a perennial All-Star in the league.

Next man up: Adam Konar – Konar didn’t have a great 2019 but while in Edmonton he was used much more. He didn’t disappoint as another linebacker who can lineup in different positions and fly around the field a little more. With the right opportunity, Konar has shown he can contribute.

O’Donnell is a monster at the guard position for the Edmonton Football Team. He takes up space and can slide to the outside in a pinch. O’Donnell has been a dominant force and in the CFL and if any team is looking to upgrade their offensive line, he should be at the top of the list. While he does turn 32 years old this year, he has been a CFL West All-Star in two of the last three years.

Next man up: Evan Johnson – A much younger giant of a man, Johnson has been a regular on the REDBLACKS offensive line ever since being drafted in the first round by Ottawa out of the University of Saskatchewan. Johnson could have seven or more years of CFL action ahead of him if he stays healthy.

Erdos has been a regular starter on one of the best offensive lines in the CFL over the last half decade. The Stampeders’ guard, like O’Donnell, is an automatic starter. He has helped to keep Bo Levi Mitchell safe with an O-line group that has been among the best when it comes to not allowing sacks.

Next man up: David Knevel – At 26 years old and only two years in the league, Knevel has seen time all over the offensive line. He’s a six-foot-eight, 325-pound frame and if developed properly, you could see Knevel slide to the outside, where he played in his only start of 2019. In 2018 he played guard and tackle. He’s maybe not an automatic starter to bring in out of free agency but is a solid sixth offensive lineman that can definitely be groomed to be a regular starter.

Ackie has played closer to the line of scrimmage as a linebacker but also played plenty of time at safety as well. He had nearly 90 tackles in 2018 and also snatched two interceptions that year. There should be plenty of teams who could use a utility knife on their defence that can lineup at multiple positions or at the very least play aggressive and physical as a safety.

Next man up: Taylor Loffler – I almost threw Loffler in the top 10 by himself but his injuries have piled up. However, with the lengthy break for Loffler to get all the way healthy, you can’t ignore he was the safety receivers feared the most coming over the middle. I’d love to see him regain his All-Star status.

Adjei had three more catches, 100 less yards and four fewer touchdowns playing alongside Tevaun Smith in 2019, who some would consider one of the top Canadian receivers in the league. Adjei, however, turns 32 this year, which is five years older than Smith but he is a solid veteran Canadian receiver coming off a career year with the Edmonton Football Team. He won’t get you 1,000 but he’ll be a solid fourth or fifth receiving option in any offence.

When you look at the strength of a team, I always look up the middle on both sides of the ball. C – QB – RB on offence; DT – MLB – S on defence. If you have a great group down the middle, they can do so much damage it makes every one’s job on the outside easier. Filer has helped run a top offensive line in Hamilton. There may not be a lot of openings at centre in the CFL, but some teams may see him as an upgrade over what they have now. 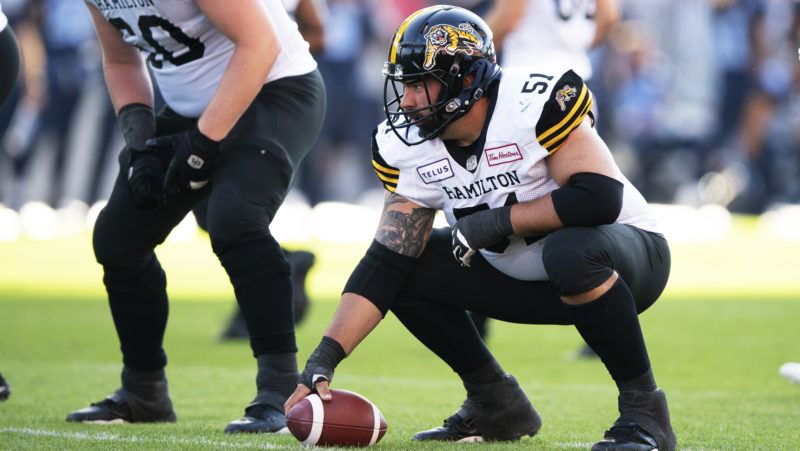 Will Mike Filer remain in Hamilton or find a new place to call home? (Geoff Robins/CFL.ca)

Next man up: Cody Speller – The centre was just traded to Toronto but he hasn’t signed a contract and the Argos didn’t give up too much to negotiate with him. Speller is developing into what Filer and other top centres are. He has a bright future and if Toronto can’t agree to a deal, I’m sure a few other teams would love to snatch him away.

The Lions young defensive back took a nice leap forward in his second year in the CFL. He played some time on defence, collecting 37 tackles and added 14 special teams tackles. He’s a defensive back you have to start to wonder if they can take on a larger role and be a ratio breaker to become a regular starter.

Next man up: Godfrey Onyeka – Onyeka hasn’t had nearly the opportunity to be a regular starter in the CFL, but with his special teams work, he’s a player that makes the CFL click. He’s a decent football player who eases the coaches mind to have on the roster in a backup role and is willing to get down field on special teams and cover kicks.

Jordan has slowly developed from a great special team rookie to a linebacker that plays considerable minutes. I think there is more to come from Herdman-Reed, who had a career-high 56 tackles in his second season in the CFL. He’s really going to have to take that next step, however, to be someone as highly touted as Muamba or Judge as Canadian linebackers.

Next man up: Justin Herdman-Reed – Not only are Jordan and Justin twins but they almost had identical stats last season. Justin has taken a little more time to get some decent time on the defensive side of the ball after being mainly special teams for his first two seasons. Now we’ll see if sibling rivalry pushes them a little bit in 2021.

The Saskatchewan kicker has been filming practice sessions in an effort to become an NFL kicker. It didn’t work out. So now it’s time Lauther re-focusses on the CFL. He slid below 80% in 2019 after kicking 90% in 2018. But Lauther’s work ethic shows he can definitely bounce back and has showed the clutch gene on a few big game winning kicks.