Ferguson: What the Nichols, Arbuckle swap means for both teams

Ferguson: What the Nichols, Arbuckle swap means for both teams

For the first time in.. who knows how long, the CFL felt like the CFL again on Sunday.

Opinions and belief systems on the morality of roster bonuses causing sudden off-season movement aside, the reality remains that at least a few times a year the CFL gives us a transaction that makes your jaw drop – or elicits a giggle depending on how you cope with shocking news.

Sundays particular storm has been brewing just off the coast for quite some time now. Nick Arbuckle and Matt Nichols not yet signed with Ottawa or Toronto respectively and each team attempting to re-structure their starting quarterback’s deal in order to meet the financial crunch created by COVID-19.

Sure enough, one day out from the roster bonus deadline of February 1, with large sums of previously agreed upon money expected to transfer hands, the storm hit land.

Nichols was released by the Argonauts without taking a snap in Double Blue.

Hours passed and the inevitable outcome of him joining former offensive coordinator Paul LaPolice in Ottawa felt increasingly likely and then: it happened.

Arbuckle was released by the REDBLACKS having completed more COVID-19 mask PSA’s than passes in Ottawa and was sent packing to his third CFL team in as many years, with the odd note of never playing for one of them.

Toronto, of course, was the only logical fit for a starting role with all the other chairs at the CFL’s starting quarterback table taken and Monday morning that too became a reality.

The whole sequence was equal parts stunning and too easy to predict. Football is a game built on X’s and O’s yes, but more on relationships and connections.

It’s why Marc Trestman and Jim Popp re-appeared in Toronto years after success in Montreal.

On and on the list goes, with two new additions for 2021. LaPolice with Nichols and Argos head coach Ryan Dinwiddie with Nick Arbuckle. Both pairs making the trip East to explore their next football adventure.

All of this is very whimsical and romantic – which reminds me guys, order the flowers now before you get distracted by Free Agency on February 9 – but none of it answers the question many CFL fans were asking themselves Sunday afternoon as the rumour mill spilled over with possibilities.

What changed from 2020 to 2021 for Ottawa to move on from Arbuckle and prefer Nichols? Ottawa GM Marcel Desjardins said on TSN 1200 Ottawa Monday morning it was simply Nichols’ improved health and desire for a two-year deal over the apparent want of Arbuckle to keep his theoretical Ottawa contract to a single year.

The real reasoning will be rumoured, discussed and reported in the coming days, but what interests me is answering the question of ‘what did these two teams actually just do?’

In it’s simplest form, both Nichols and Arbuckle are productive quarterbacks, especially at shallower depths of target with room to grow in the consistency of mid-range passing while out-performing what many believe to be a deep ball deficiency. 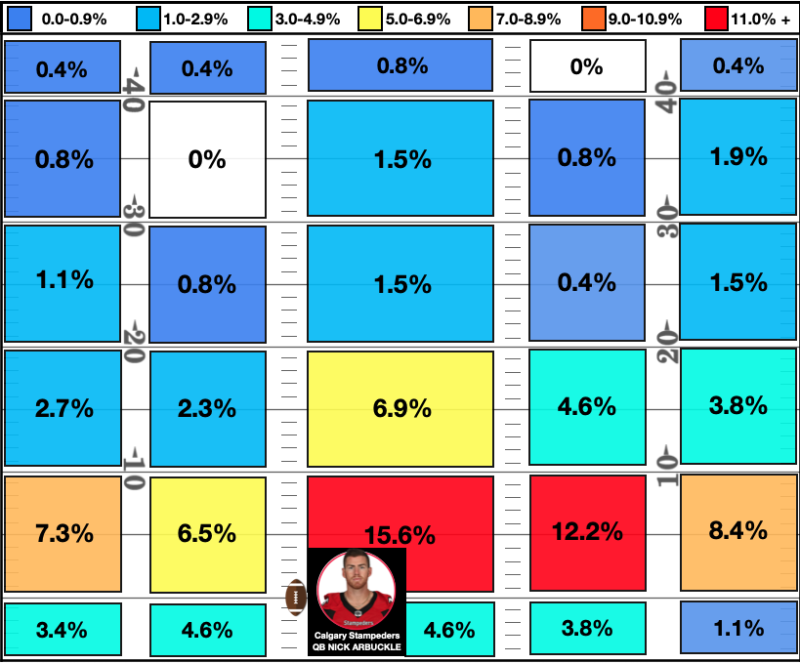 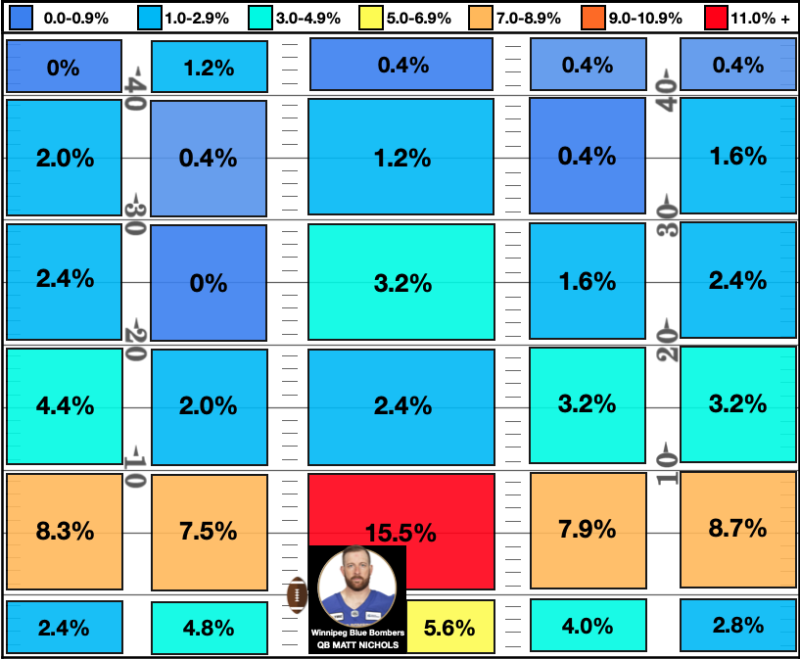 Arbuckle tended to work the middle of the field more in his 2019 starts with Calgary while Nichols – using his veteran savvy – identified when and where to take deep sideline shots more often. Much of this can be attributed to system but quarterbacks have natural preferences on preferred throws which over time, hardens into tendencies. 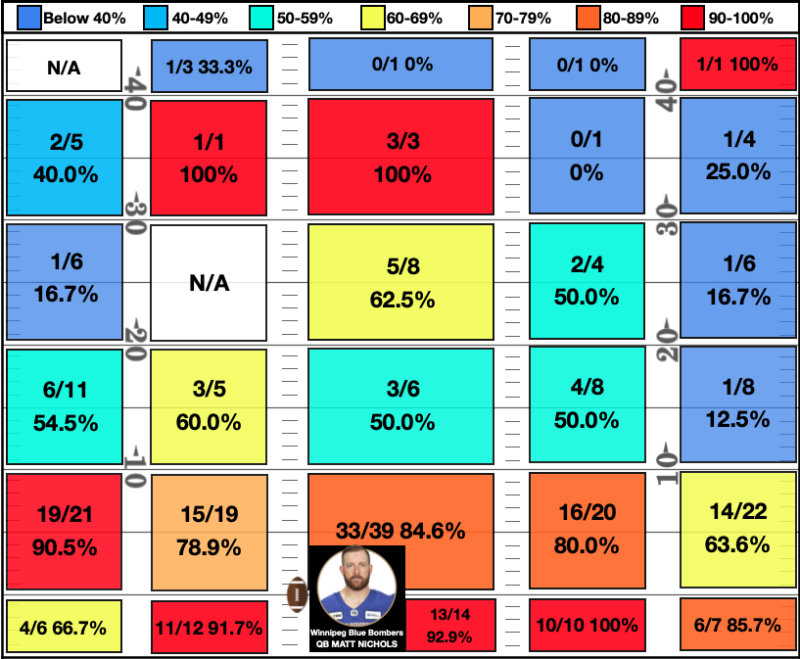 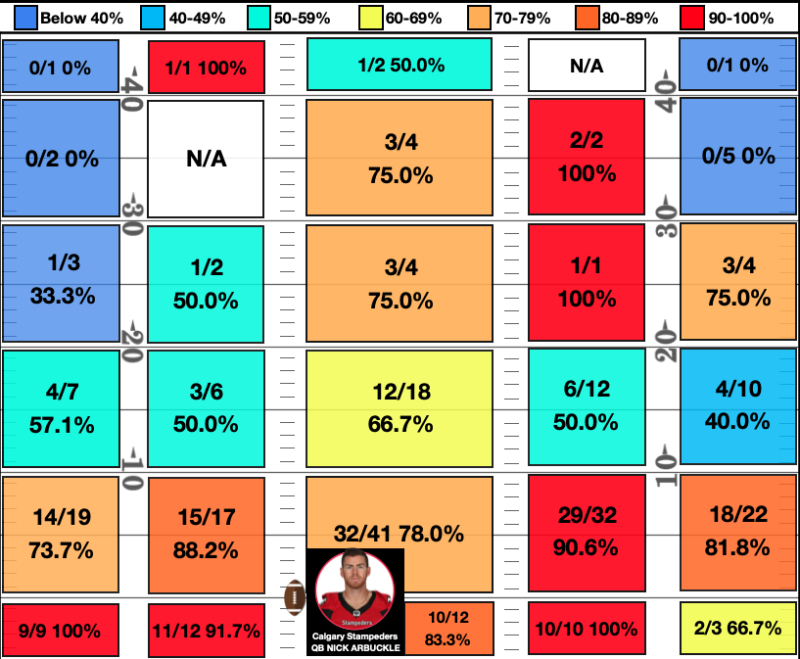 Not to mention both Nichols and Arbuckle are about to step into nearly identical systems with their new teams as they did at their last CFL stop, making the 2019 comparisons that much more relevant to the 2021 conversation.

The question now becomes can they take the 2019 heat charts above and improve with fresh surroundings?

While many similarities exist between the two, there are clear differences.

Both excel completing passes at or near the line of scrimmage well above CFL average, while Arbuckle showed great command of passes around 30-yards in the air. 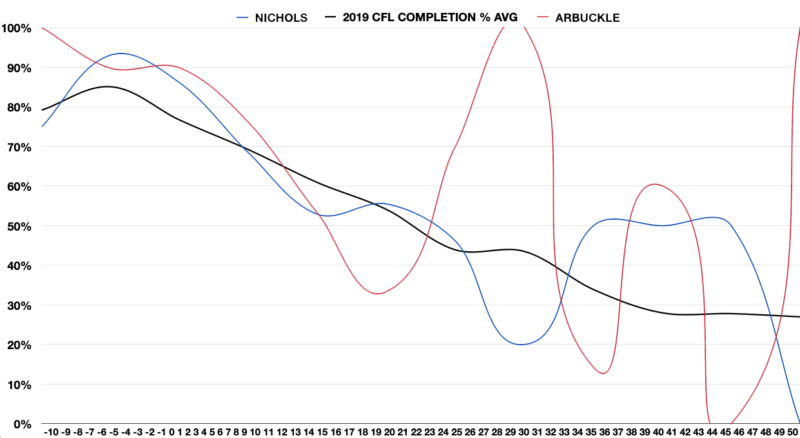 Both attempted well above a league average percentage of passes near the line of scrimmage with Arbuckle sacrificing attempts around the 10-yard mark and Nichols deficient in attempts between 15-20 yards. 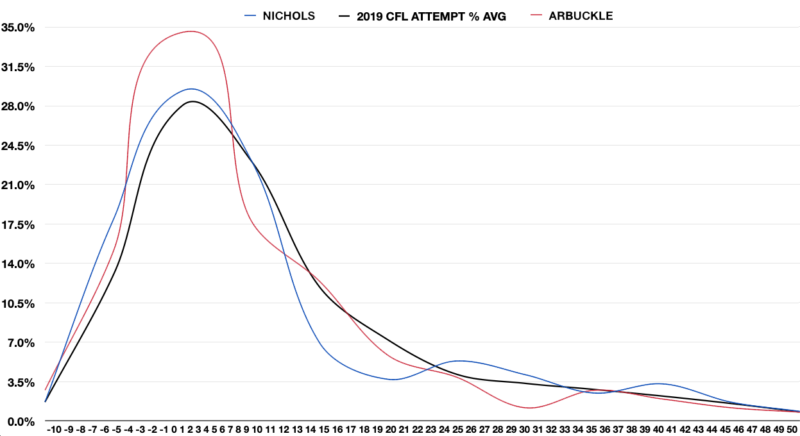 Both refuse to dip below CFL average in accuracy grade from -5 to +15 yards in air with massive fluctuations on deeper targets. 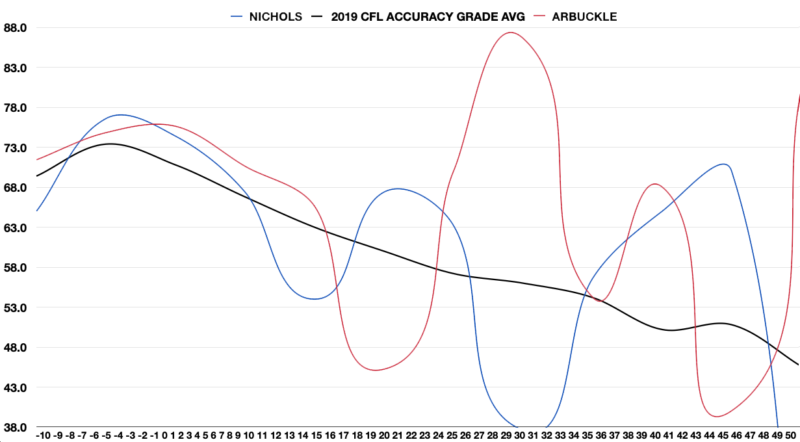 Finally, both remain above the CFL average in Production Grade on passes under 10-yards in the air with Arbuckle attacking defined layers of the defence with great success and Nichols owning a wider swath (+34 to +46) of the home run target zone 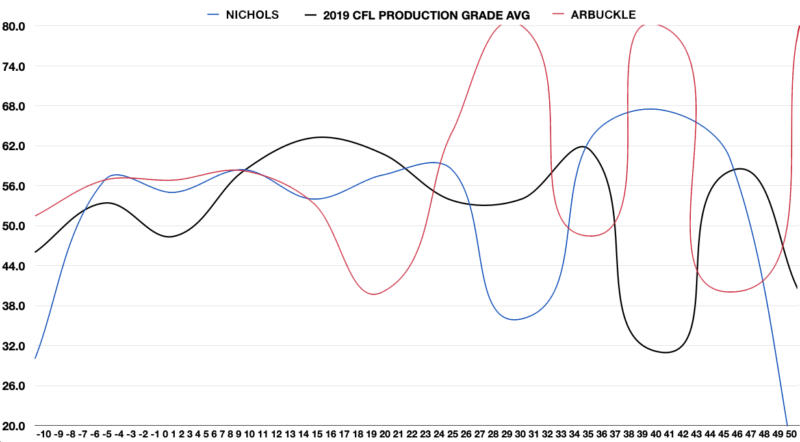 All of these metrics come with plenty of variables from teammates to coaching, injury to protection influencing every decision and throw.

In Ottawa those variables will be less for Nichols than they would have been in Toronto, and vice versa for Arbuckle. Undoubtedly a contributing factor to Ottawa’s ultimate decision was that they know what they are getting in Nichols when coached by LaPolice more than any other CFL quarterback possible.

The REDBLACKS played it safe and smart strategically as we prepare to embark on – hopefully – a season unlike any before, but did they trade future returns for the comfort of the moment?

To answer that I looked at some of my other favourite metrics to get a sense for similarities and differences between these two new Eastern tag teams in play calling and 2nd down passing where CFL quarterbacks really make their money.

From this and other information, including endless hours spent watching both play, I believe that while Nichols is the right choice for immediate improvement in Ottawa from a dismal 3-15 season in 2019, Arbuckle has greater upside that the Argos should be thankful was gift wrapped from their highway 401 foes on Sunday.

At this point Matt Nichols is a fully-formed product. Some might perceive that as a slight when it’s actually a compliment. Nichols has refined his game in a way that Ottawa knows exactly what they are getting and can trust his value when fully healthy.

It’s a matter of perspective whether you believe that value was derived from Nichols and LaPolice’ partnership, or Nichols and LaPolice featuring Andrew Harris, a dominant Bombers offensive line, excellent special teams, the CFL’s best rush end in Willie Jefferson and tackling machine Adam Bighill.

In Toronto, the Argos get a relative unknown as Arbuckle discovers his game and refines in the same way Nichols did with Edmonton early on. Over time the second down sack percentage will drop as he learns to avoid turning a tough down and distance into a bigger loss and as trust continues to grow in his ability the second down pass play call percentage will rise to 2019 Nichols-like levels shown above.

Arbuckle already has a superior 2nd & long (7+) production grade on called passes, what’s to say that gap doesn’t widen with experience and collected knowledge? These are the little moments of maturity that will aid Arbuckle in Toronto given the time and trust to grow.

Along for the journey in Toronto are two of Arbuckle’s favourite 2019 Stamps targets in Juwan Brescacin and recently-acquired Eric Rogers. Brescacin had the highest production grade when targeted of any Arbuckle receiver in 2019 (71.0) while Rogers had Arbuckle’s second highest target percentage (18.6%) behind only current Packers receiver Reggie Begelton (20.5%).

No matter what happens in 2021 – as long as we get on the field – it will be memorable, but Sunday’s chaos just added another layer to the East Division as Nick Arbuckle’s Argos and Matt Nichols’ REDBLACKS attempt to dethrone the defending East champion Hamilton Tiger-Cats.