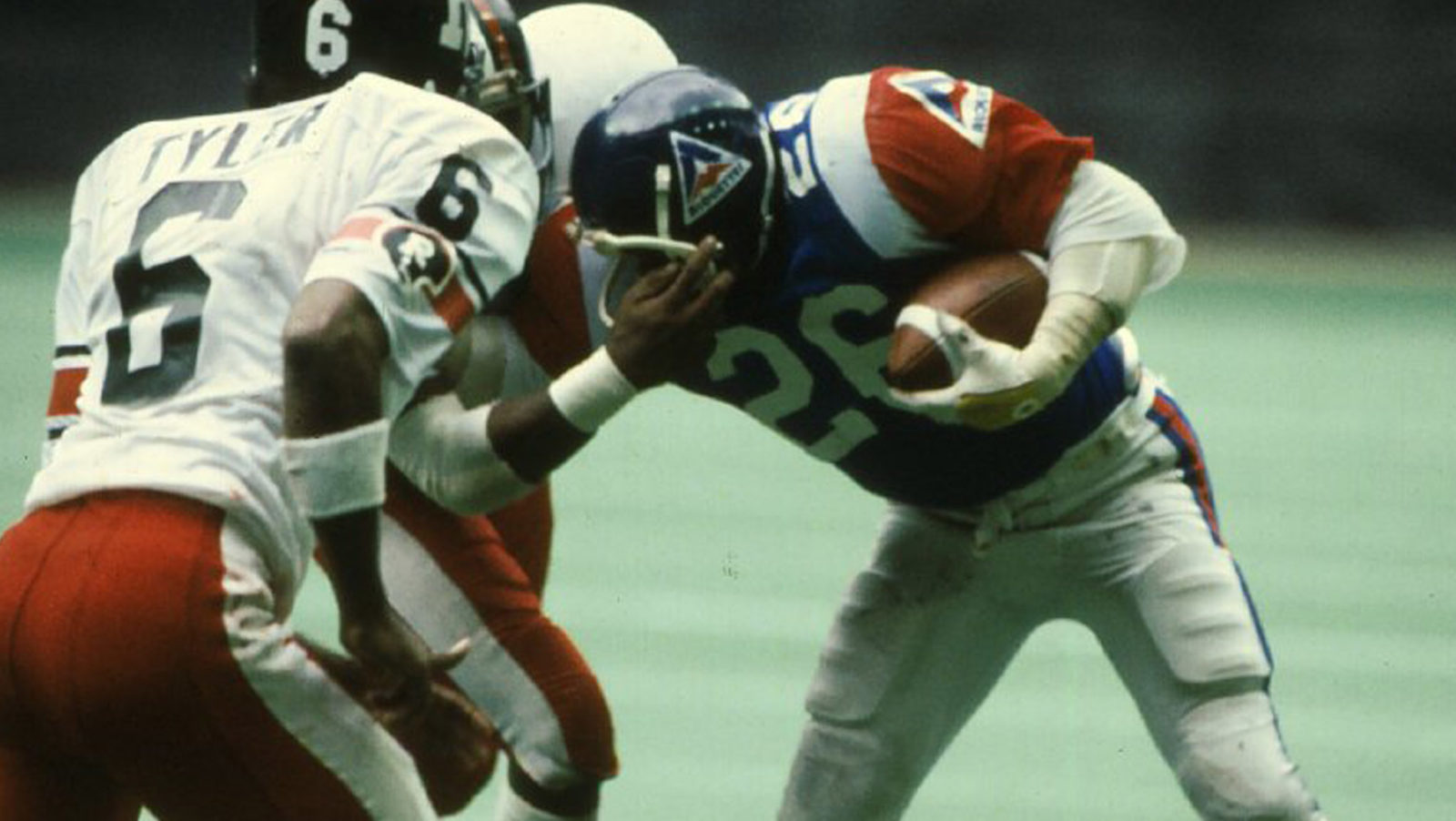 Well, we have come to an end to my history of CFL uniform series.

As I have said many times, what I loved about doing this was not going full Joan Rivers (If you are under 30, please Google that reference) on colour schemes but rather because it helped up my knowledge into the history of this great league while learning about past All-Stars.

I hope you have enjoyed reading these pieces and that you as well have come away with a heightened insight into the history of the CFL. We end it with the Montreal Alouettes. 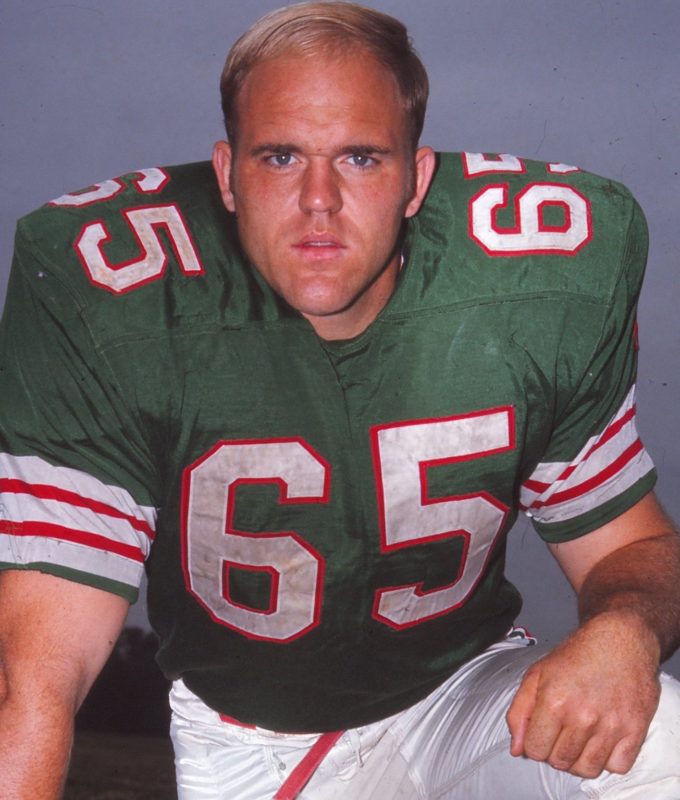 Ed George, four-time All-Eastern All-Star, two-time Grey Cup champion and judging by this picture the inter-galactic, undefeated staring contest champion. The uniform itself is a fairly basic, no-nonsense and could be confused for the Miami Dolphins. Upon first glance, the first thing I notice is Ed’s left hand is balled up into a fist. Considering Ed played on both sides of the line scrimmage, I’m not shocked his pose screams, “I’m ready for a fight.” 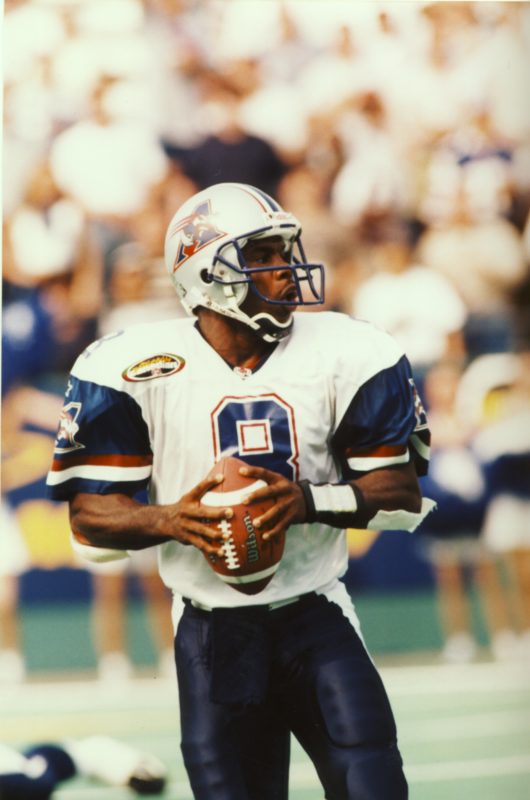 Who needs two tickets to the gun show because CFL Hall of Famer Tracy Ham has a pair to give? This is the classic quarterback-in-the-middle-of-all-the-action pose. I know that Tracy was properly rewarded for his 1989 season by winning the Most Outstanding Player Award but can we all take a moment to appreciate his accomplishments that season?

He helped guide Edmonton to a 16-2 season in a West Division that saw the last place BC Lions score more points than any team in the East and it would be the third-place team, the Saskatchewan Roughriders, who would go on to win the Grey Cup that year. Yeah, it really doesn’t matter what decade it is, the West is always going to be better.

So not only did he wrack up 16 wins in just a weekly buzz saw of high-end competition but he also put up historic numbers. As a passer Ham excelled throwing for over 4,300 yards with 30 touchdowns to 18 interceptions (Yes, kids, I know 18 seems high but in 1989 with the way the game was played and with the rules not being as favourable for quarterbacks back then compared to now that is not a crazy high interception total) but he also became the first quarterback to exceed a 1,000-yards rushing. You were winning your fantasy league if you had Ham and his 5,371 total yards and 40 touchdowns.

His yardage total that year is higher than the entire offensive output of the 2019 Ottawa REBLACKS and he accounted for more touchdowns than four CFL teams did last season. I’m convinced if Edmonton had not been upset by Saskatchewan 32-21 in the Western Final, his 1989 season would resonate to a far higher degree with today’s generation of fans. 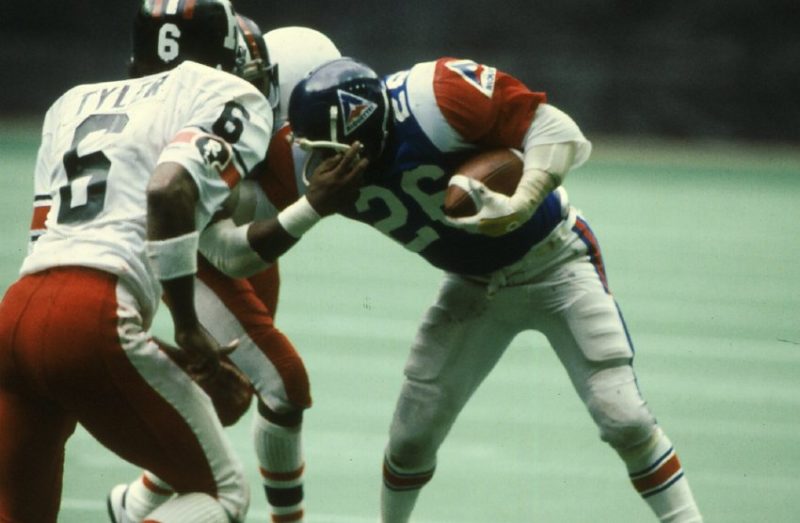 Can someone please tell me just what that logo is on the helmet of running back David Green? The man was the CFL MOP back in 1979, he deserves a better logo than one that looks either it’s from a defunct airline or for some sort of hippie cult that worships the sun. I’ll be honest I’m not really a fan of this overall look, the primary blue in the middle feels it’s cut off from the rest of the uniform. Actually, I hate to cheat on Montreal, but my eyes are more on little known defensive back Maurice Tyler and that much tighter look Ottawa was sporting in 1980. Not sure why but I’m digging the mini helmets around the biceps. How much you want to bet there was no flag thrown here for face masking? In 2021 Green is 100 percent getting that call. 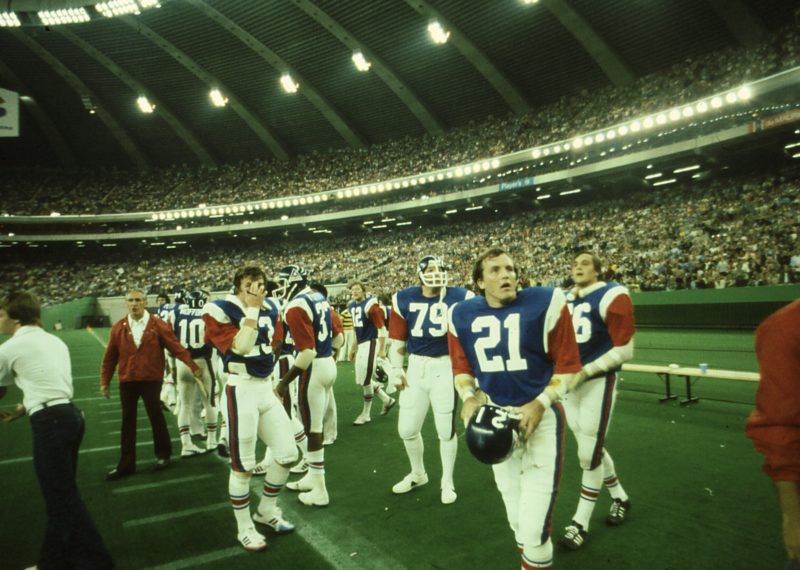 As a hopeless sports romantic, I love looking at shots of a sold out Olympic Stadium. Damn, that place must have been rocking during the mid to late 1970’s when they made five Grey Cups in six years.

Let’s take a look at the three most prominent players featured here.

It’s hard to not get emotional looking at the player standing just on the field with a hand over his face. That’s two-time Grey Cup champion Tony Proudfoot. Tony’s biggest impact in football was not as a player, though he was twice named to the East All-Star team, but rather as a writer/broadcaster/educator. In 2008 he was inducted into the Football Reporters wing of the Canadian Football Hall of Fame. Of course, mention the name Tony Proudfoot and the first thought that comes to mind was his fight against ALS and the money he raised to fight this horrible affliction. During his battle against Loy Gehrig’s disease he helped raise over a half million dollars. (By the way if you would like to donate … try the Tony Proudfoot fund: http://als-quebec.ca/get-involved/tony-proudfoot-fund/)

You see the player looking up with his helmet in his hands? That’s one of Georgia Tech’s greatest football players (A three-time First-Team All-American) and a three-time CFL All-Star, Randy Rhino. What name! I will not make the predictable joke that his name sounds like an adult film star. Instead, I’ll focus on Olympic Stadium. This picture is from 1979 and the stadium is absolutely packed. The late 1970’s were such a glorious time for the Alouettes and the city of Montreal. Two years earlier (1977) from this exact moment the Alouettes set CFL attendance records for a single game and for an entire season.

Finally, the player in the background with that menacing three barred helmet on is tight end Nick Arakgi. I think we can all agree that if you are a skill position player you can only be allowed to wear that medieval looking helmet if you are either a “bruising” running back or a tight end. Fleet of foot receivers or running backs that avoid contact by going out of bounds need not apply for that monstrous headgear. More on Nick in a moment. 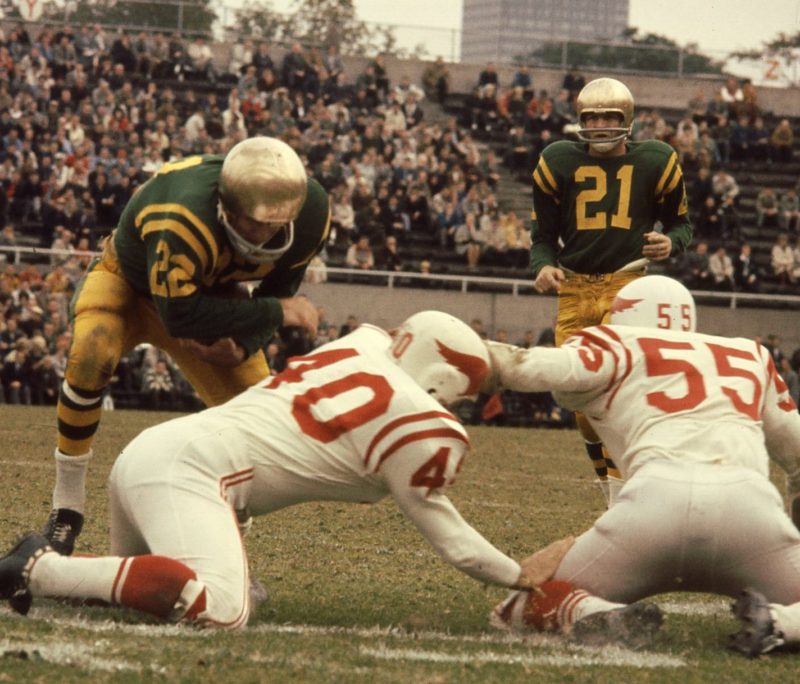 I have no idea who No. 40 and No. 55 are and I imagine they would rather not be identified considering this does not look like the proper technique to bring down a ball carrier. I wouldn’t trust this defence to stop a nine year old in a spirited game of Red Rover. At least those 1960s Montreal Alouettes helmets look sharp. 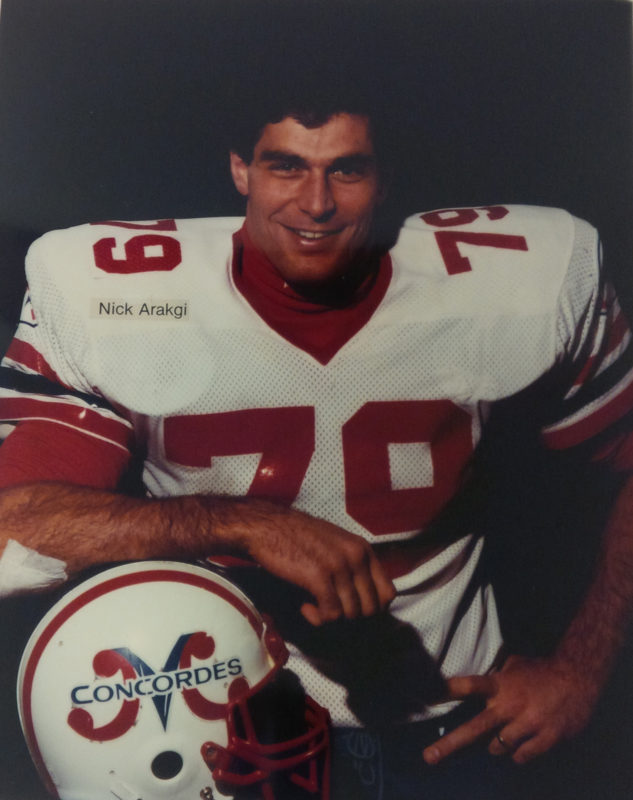 Hi everyone, my name is Nick Arakgi and when I’m not busy catching passes from Turner Gill you can find me working as a stunt man for a 1980s cop show or as a chin model. It’s a good thing that the 1984 Most Outstanding Canadian takes a good photo because that uniform is rather plain and the helmet is a disaster. That helmet looks like something you would find from a football movie that did not get the rights to use any official images from the NFL. I swear the Concordes were one of the teams in ‘Any Given Sunday.’ Think of the Concordes as a curious place holder for a Montreal Alouettes team that went being wildly popular in the 1970s to being lost in the sports wilderness until their true return to prominence in 1996. 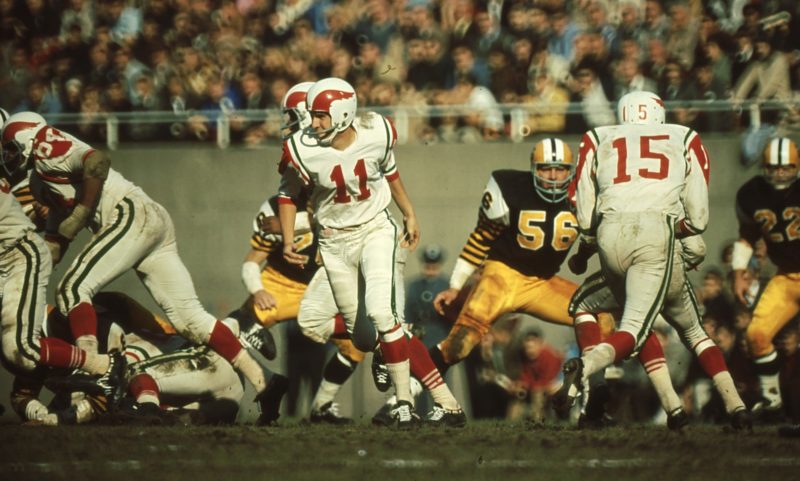 We end with the 1960’s and my all-time favourite Montreal Alouettes uniform. The dynamic racing stripes, the uncluttered jerseys and of course the red wing helmets. In fact, I’m a big fan of the entire classic Hamilton/Montreal uniform combination going on during this misdirection running play.

Unfortunately for Montreal, their on-field aesthetic did not translate to actual on field success. The Alouettes would not record a single winning season for the entire decade. However, that doesn’t mean these uniforms weren’t a part of organizational excellence, it just took over four decades for it to finally happen.

In 2009 the Anthony Calvillo Alouettes went full 1960s throw back for four games in the regular season. Some would say it was because that 15-3 team was jam packed with All-Stars/future Hall of Famers that led to them going 4-0, outscoring their opposition by a whopping 116-47 margin during that span but I say it was those red wings.

I told you I can often fall prone to sports romanticism.