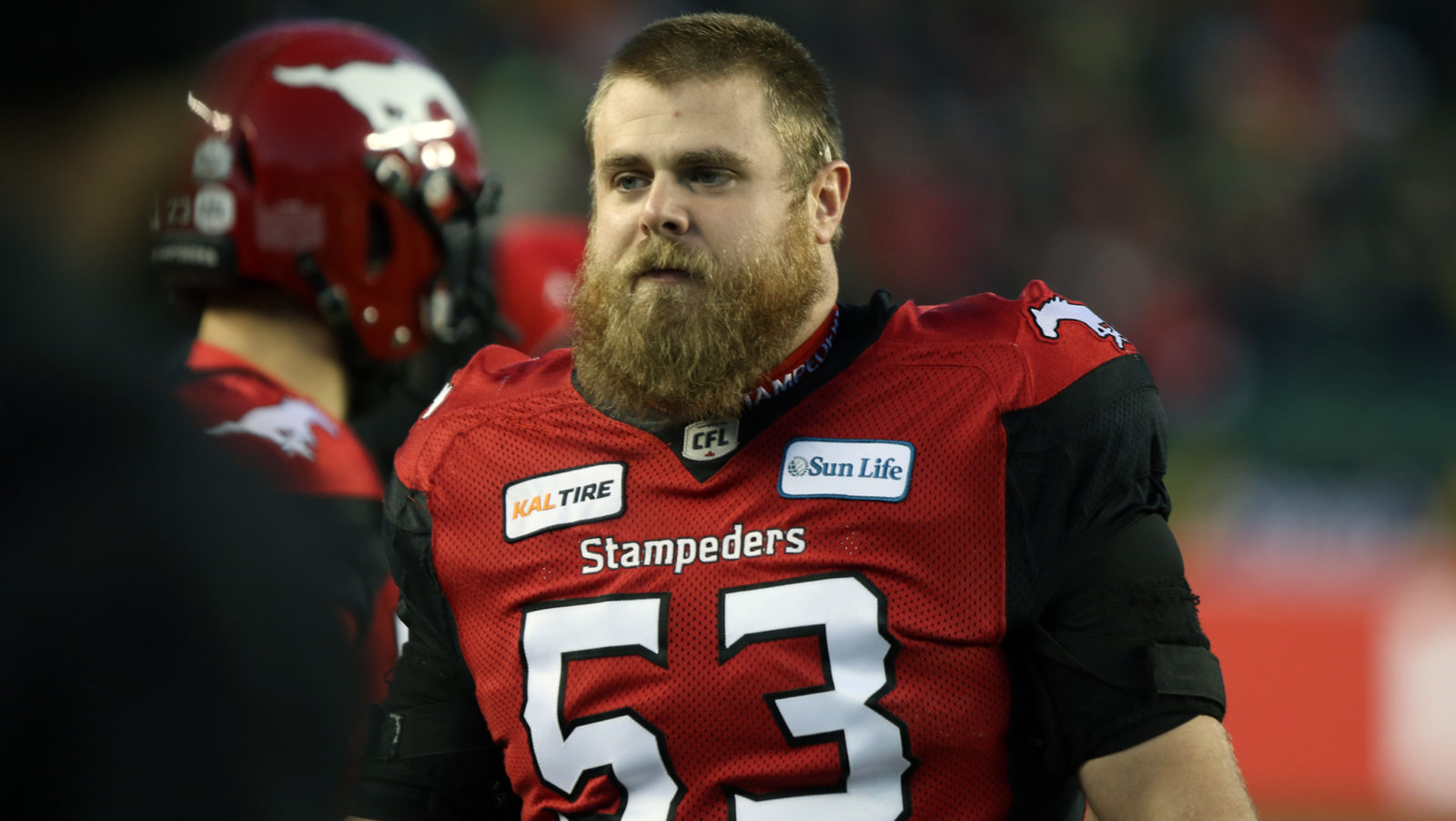 CALGARY — After six seasons, 61 regular-season games, five post-season contests and a Grey Cup championship as a member of the Calgary Stampeders, offensive lineman Brad Erdos announced his retirement from the Canadian Football League on Monday.

An Alberta product – he was born in Lethbridge and raised in Coaldale – Erdos was selected in the fourth round by the Stamps in 2012 and he joined the club in 2014. The Simon Fraser product became a fixture at right guard and was part of a Calgary offensive line that was habitually among the league leaders in fewest sacks allowed.

“It has been a great ride, but it has come to end,” said Erdos. “After six seasons of football in Calgary, I am proud to retire a Stampeder. First off, I have to thank my wife for all of her support. I have been through numerous injuries, surgeries and rehabs during my career, and she has been right there helping me while raising our two boys.

“I’m lucky to have been a part of this organization and play with some great teammates. It has been a privilege playing alongside them. The fellow members of the o-line I’ve suited up with have been amazing players and friends. It made it easy to come to work every day.”

“Brad was an extremely versatile player who could play any position on the offensive line,” said Stampeders president and general manager John Hufnagel. “Starting in 2016, Brad was a stalwart at right guard. He was a battler and we could depend on great effort and play from Brad, game in and game out.

“Brad was an important part of our success including our Grey Cup championship in 2018 and I thank him for all he has done for this organization. I wish him, his wife Amanda and their sons Carson and Connor all the best in the future.”

Erdos started every game in both the 2017 and 2018 seasons as the Stamps reached the Grey Cup game both years, winning the title in 2018 in what proved to be his last game in uniform. He missed the entire 2019 season with a knee injury.

“Brad had a significant impact on the success of our offensive line during his final three years including that Grey Cup championship in his final season,” said Stampeders offensive coordinator and offensive line coach Pat DelMonaco. “Both he and Shane Bergman were important leaders who made major contributions to the growth of the offensive line room. Brad’s passion and dedication to his own development as well as to the development of the group will be sorely missed.”

“I want to thank Huff and Dave Dickenson for giving me my opportunity,” said Erdos. “I owe a lot to Pat for helping me become the player I am today. Without his coaching and support, my career would have been much shorter.

“I have to thank the Stamps training staff and doctors for helping patch me back together numerous times, Jason Dick and Karla Skog for getting me ready every week, my family and friends for their support and the Stamps fans for coming to out the games and cheering us on. I will never forget running on the field for a Labour Day Classic to a packed stadium and a fly-over.

“I wish my career could have ended differently. Unfortunately, due to injuries, it is time to walk away. But looking back on all the games, Grey Cups and many friendships, I couldn’t have asked for more.”