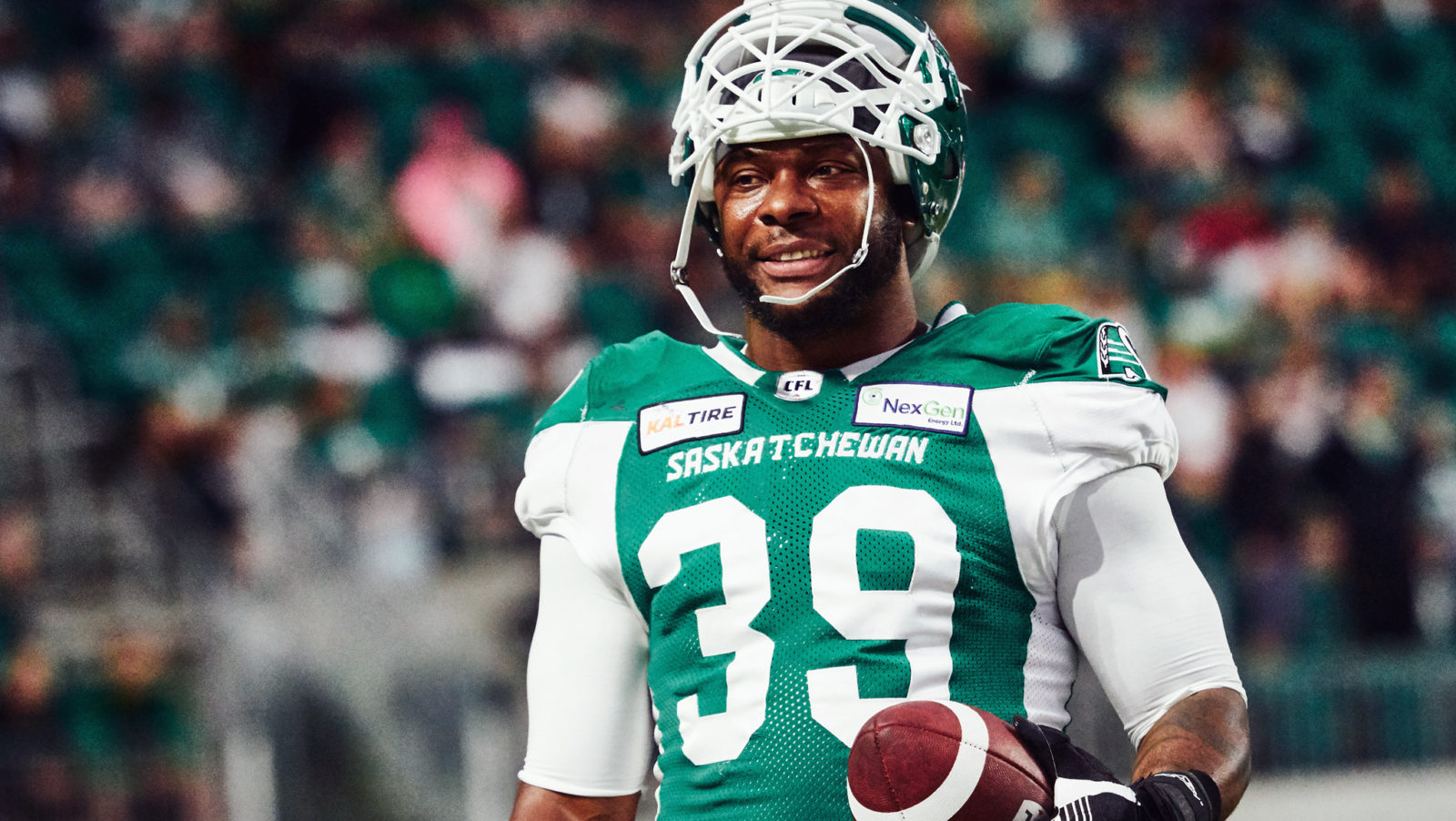 The ideal, picturesque answer would start with Charleston Hughes hearing a voice in the middle of the night.

Maybe it’d just be the whisper of the wind, or some other means that the universe has to reach out to him, prying sleeping eyes wide open and setting him in motion. He’d drive through the night, down the quiet, open roads of Regina out into the country. He’d pull into Grasslands National Park, near the Saskatchewan-Montana border in time to start a sunrise hike.

At the peak of the 70 Mile Butte Trail, he’d survey the desert-like landscape around him and be astonished to find a pool of water not too far away. The water would shimmer as he scooped some into his hands and when he put it to his face he’d feel different, more energetic, stronger, younger.

That would be the ideal answer. Unfortunately for the purposes of dramatic storytelling, Hughes sleeps pretty soundly at night and despite what his stats have shown as he’s aged through a now 12-year CFL career, he has not in fact found a fountain of youth.

“I guess what it all boils down to is you’ve got to find what works for you, man,” Hughes said from his home in Regina, shortly after signing a new contract with the Toronto Argonauts.

“That’s kind of how I go about it. There’s no secret to preserving your athleticism or preserving your youth. I guess the older you get they say the wiser you get, right? You just start figuring out other ways to stay in shape.”

Hughes has been on a quarterback-chasing tear for the last four years, leading the league in that category, but you could argue that he hasn’t really slowed down since he emerged as an elite d-lineman in 2011. He set a career-high in sacks with 18 in 2013, but has been in double-digits in sacks every year except for 2014, when he had eight in 11 games. That’s led to six CFL all-star selections and eight CFL West all-star nods.

His consistency has been remarkable; that he posted 15 sacks in 2018 and 16 in 2019 is an incredible example of sustained excellence. There is no secret to how Hughes has been able to do this, it’s just that the obvious answer isn’t appealing: Hard work.

Early in his career he decided he wanted to stay around the 245-pound mark and he’s refused to let himself drift over that. He doesn’t pretend that the workouts are fun. He tries to keep them fresh and changes them up when he needs to. As he’s moved through his 30s there’s been no shortage of younger players around him to keep him motivated and pushing, which has helped too.

“You’ve got to keep finding ways to keep yourself motivated, whether it’s going to a yoga class or whether it’s taking up some kind of a fitness class, or working with a trainer that you normally don’t work with,” he said.

“If you get around a bunch of young kids, trying to keep up with all the young kids, that’s going to motivate you to keep going or push a little bit more.”

Hughes had some emotional unpacking to do while accepting that he wasn’t going to be back with the Riders this year. Having settled in Regina — he’s lived there through the pandemic and started a podcast and home renovation business this year —  he was very publicly hopeful about staying a Rider for 2021. Once he was released and weighed his free agent options, he started to get excited about Toronto.

“I had an offer on the table within the first two days of that 10-day window,” Hughes said.

“You’ve got to go somewhere where you’re valued, where you feel like (you’ll) have the most success on the field. I felt like Toronto was that place.”

Hughes remembers the Argos’ d-line in 2019 and how little pressure it put on quarterbacks. The combo of GM Michael ‘Pinball’ Clemons and VP of player personnel John Murphy put in work through last year’s free agency to address that, but continued to beef up the d-line this winter. Shortly after Hughes’ signing was unveiled, the Argos announced they’d signed former Stampeder DE Cordarro Law. Throw in fellow veteran DE Odell Willis, Fabion Foote, Drake Nevis and Craig Roh and there’s a good mix of new blood and talent in that d-line.

“I know that, that their pass rush was the worst in the league,” he said.

“I feel like I bring that kind of value to the team. So when the team values me because of that reason, then, you know, it’s a great feeling.”

Coming to terms with leaving Regina was difficult for Hughes, but once he started to look forward, he saw a lot of positives in his new situation.