TORONTO — Montreal Alouettes general manager Danny Maciocia made good of his word, as his team got off to a hot start when the free agent market opened up on Tuesday.

“I’d like to concentrate most of my efforts on the defensive side of the ball,” Macocia said last week. “There’s a few areas where I think we can either get better and even make sure that we are able to have some depth at positions. That’s where my focus is going to lie here in the next few days.”

And they did turn their focus to the defence, signing six playmakers to new contracts.

Their biggest addition was in the trenches as Montreal took defensive lineman Almondo Sewell from the West Division for the first time in his CFL career. Along with Sewell, Maciocia and co. brought back SAM linebacker Patrick Levels and linebacker Chris Ackie, who signed with Hamilton and Toronto as free agents in 2020, respectively. Finally, the team re-signed defensive lineman Woody Baron while also adding defensive linemen Nick Usher and Michael Wakefield. 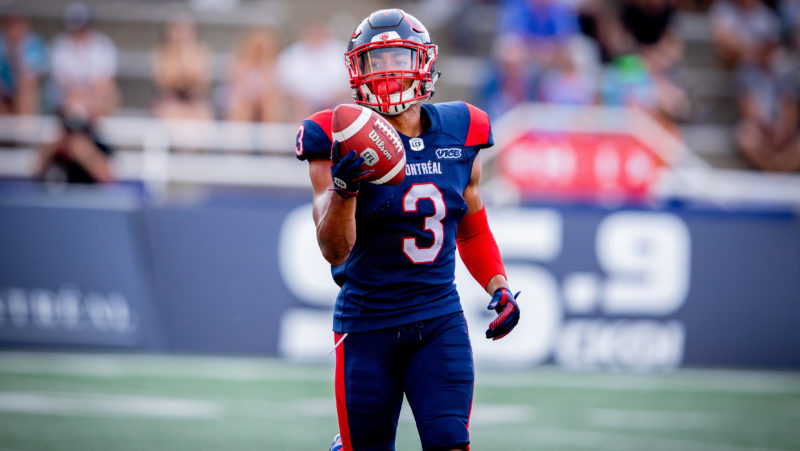 Much like the Alouettes, Saskatchewan made a handful of moves on the defensive side of the ball, signing linebacker Larry Dean, twin brothers Justin and Jordan Herdman-Reed and a pair of defensive backs in Lorenzo Jerome and Godfrey Onyeka. Their biggest signing, however, was bringing back defensive lineman Micah Johnson just a year after he left Saskatchewan for the BC Lions.

Saskatchewan also inked Evan Johnson, as the offensive lineman made his way back home to Regina.

The day started with a pair of running backs finding new homes just over an hour after the market officially opened up at 12 p.m. ET. Shaq Cooper headed to the Lion’s Den, inking a deal with BC while John White left the Den and headed East to Toronto.

In other news, the Edmonton Football Team signed 2017’s Most Outstanding Rookie, James Wilder Jr. and BC put pen to paper with speedsters Lucky Whitehead and Chris Rainey.

The Ottawa REDBLACKS didn’t have much work to do on Tuesday after Marcel Desjardins and co. signed most of their pending free agents to new contracts ahead of the market opening. That being said, they were able to sign Don Unamba to a new deal, keeping the SAM linebacker in the nation’s capital. The group also signed national defensive tackle Stefan Charles, who could end up being a ratio-friendly addition to the defensive line.

The Calgary Stampeders and Toronto Argonauts added some quarterback depth to their rosters, as Canadian pivot Michael O’Connor signed a deal in the red and white while Antonio Pipkin inked one in double blue.

Hamilton was rather quiet on the first day of free agency, after most of their players with expiring contracts had already been signed to extensions. They did, however, bolster their secondary with the addition of defensive back Ciante Evans.

The Winnipeg Blue Bombers weren’t active at all on the first day of free agency after Kyle Walters had signed most of his championship squad ahead of the opening of the market.

Among the flurry of signings, 10-year CFL veteran linebacker Solomon Elimimian announced his retirement from the CFL.

Despite many players signing deals on Tuesday, there’s still plenty of star power out there. Two of the most notable pieces that have yet to sign deals are Canadian linebackers Henoc Muamba and Cameron Judge. Both were ranked in the top five of CFL.ca’s top 30 pending free agents list.

To see where the pair, and the rest of the free agents land, keep it locked to CFL.ca for what’s sure to be a busy Day 2 of CFL Free Agency.