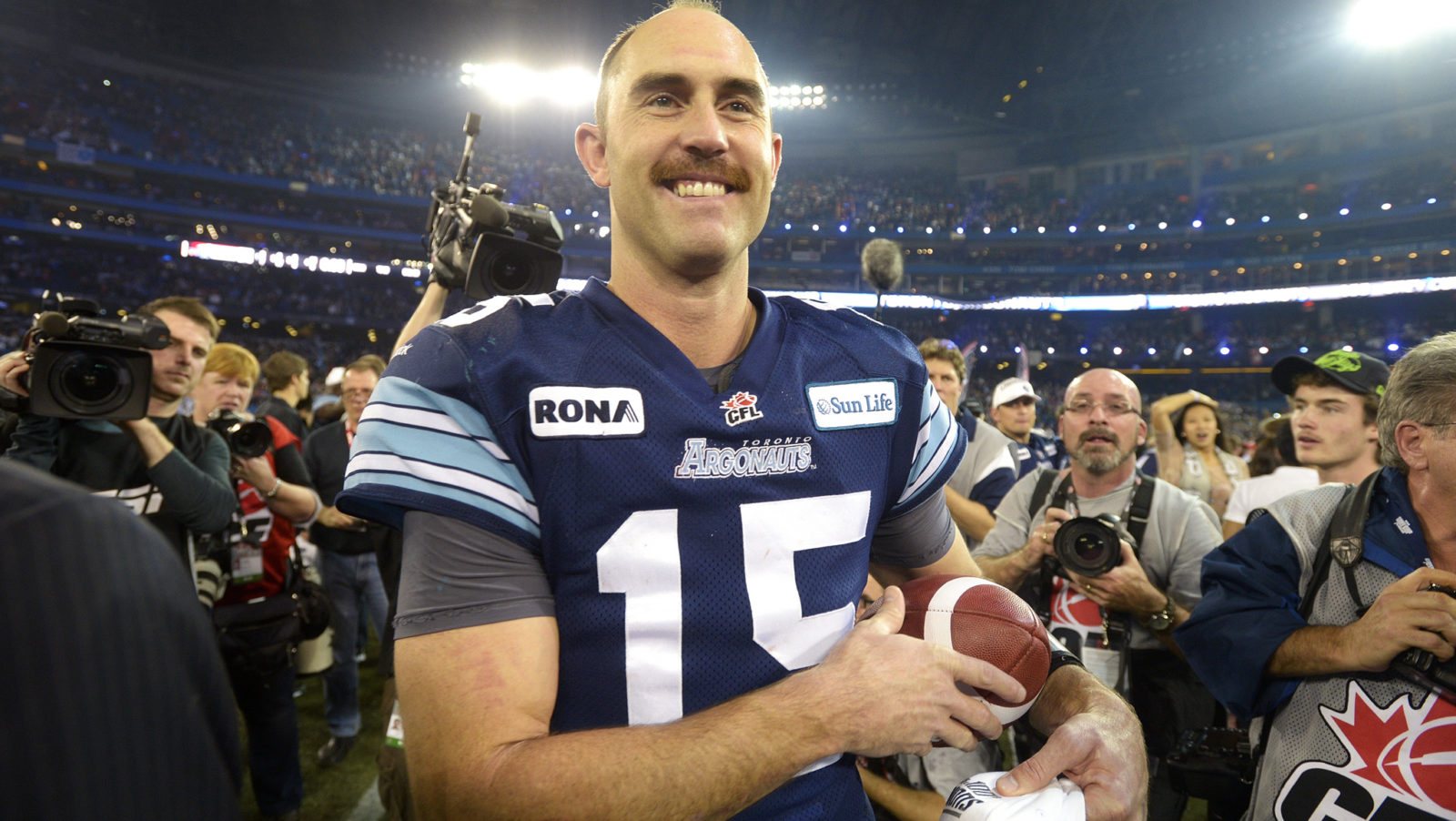 The moment Patrick Mahomes threw that third quarter interception with Kansas City trailing Tampa Bay 28-9 was the moment my mind started to stray from the Super Bowl and I moved on to more pressing thoughts. Unless you were knee deep in prop bets, I bet that was the same for many of you. So, what did you do next? Did you find a movie to watch, clean up your kitchen or did you take a long hard look at yourself in the mirror and feel shame for all the snacks and junk food you consumed? Hey, it’s a championship game, calories don’t count.

For me I always try to find a CFL spin on the Super Bowl. I could have gone with the theme of “shock” as no one expected the Buccaneers to blow out the Chiefs. Yes, we could easily see Tom Brady winning (again!!) but a 31-9 beat down certainly came out of nowhere for the majority of football fans. Same for the 2019 Grey Cup where most people expected the 15-3 Hamilton Tiger-Cats to come out on top over the 11-7 Winnipeg Blue Bombers. Instead, the Bombers won convincingly.

What stuck out to me the most was how Tampa went from laughing stock, perennial loser to Super Bowl champion with the biggest difference being Tom Brady. The Bucs roster and coaching staff was pretty much the same, just the quarterback was different, vastly different from the turnover machine known as Jameis Winston.

So, what are the CFL examples of this in the modern era of football? Yes, we all will have different interpretations of “modern” I’m going with 1990 onwards as that was the year I became a football fan. Now don’t hate me for this, but the two best examples of teams that went from loser to champion in one year with the addition of a high-profile quarterback both come from the same team. Yup, the Toronto Argonauts. I welcome people writing in with other suggestions to prove how short sighted I am. I’m all good with a little humiliation if it leads to me learning something I didn’t know. But when I go over the 1996 and the 2012 Argonauts I think you will agree these two teams represent the greatest one year swings we’ve seen.

Let’s start with the team that most resembles the Super Bowl Champion Tampa Bay Buccaneers, the 2012 Argonauts.

In 2011 Toronto finished 6-12 scoring the 2nd fewest points (397) in the league while giving up the most points (498). They had one All-Star in Chad Owens who made it as a returner. Led by coach Jim Barker (He would take on full time GM duties after this year) Toronto’s offence was held back by a trio of mediocre quarterbacks in Cleo Lemon, Steven Jyles and Dalton Bell. Combined the team completed less than 60% of their passes, threw 10 more interceptions than touchdowns and couldn’t even hit 4,000 combined yards through the air. That season was so rough for Toronto passers that even punter Noel Prefontaine found a way to get picked off twice in just five pass attempts. The quarterback play wasted a fine year from running back Cory Boyd who plowed his way for over 1000 yards keying a rushing attack that put up nearly 2300 yards on the ground.

Unfortunately, you’re not winning games with that sort of quarterback play but then a magical thing happened in the off-season! Jim Barker somehow convinced the Edmonton Football Team to trade Ricky Ray and suddenly things turned around. Toronto didn’t suddenly jump to an elite 14-4 record but much like Tampa (7-9 last year to 11-5 this season) they saw an important boost going from six to nine wins. Also like the Bucs, Toronto got hot in the playoffs upsetting the Montreal Alouettes on the road and then winning it all in their home stadium (Just like Tampa winning it at Raymond James Stadium) over the Calgary Stampeders.

The Ricky Ray addition didn’t turn Toronto into a regular season juggernaut. Their offence scored 48 more points than the 2011 version and the defence gave up just seven fewer points. However, the big difference was the steady play of Ricky Ray, the poise he displayed from start to finish has a funny way of rubbing off on the rest of the team. One tangible way this translated to success on the field was their record in close games. Toronto went 7-2 in games decided by one score or less. They played in five games that were all decided by three points, Toronto won them all. Yes, this may sound like a cliché but those sorts of results are as much about veteran leadership as they are about luck.

There were some other big time additions beyond Ray that had a significant impact on this team. Defensive tackle Armond Armstead and cornerback Pat Watkins both made their CFL debuts and both ended the year on the Eastern All-Star team. But the story of the 2012 Argonauts starts and ends with the arrival of Ray.

The contrast of the 2011 Argonauts with the 2012 version is not as dramatic when you consider there were still plenty of notable returning players including Matt Black, Ricky Foley, Ronald Flemons and Kevin Huntley. Now the 1996 Argonauts squad may be the granddaddy of all team metamorphoses. (Did I use that word right??)

Imagine going into hibernation on October 27th, 1995 after the team beat Calgary 31-22 to finish the season at 4-12 and then woke up on the morning of June 27th 1996 when Toronto would kick off their 1996 season. There is no way you would recognize the team!

Head coach Bob O’Billovich is out and Don Matthews is in. In fact the entire coaching staff has been replaced with the biggest change being Adam Rita installed as the team’s new offensive coordinator.

Then there was the shiny new all-star laden roster. The Argonauts cleaned up with the demise of the American expansion experiment. On offence here comes running back Robert Drummond (Baltimore), centre Mike Kiselak (San Antonio) and guard Chris Perez (Memphis). All three would make the CFL All-Star team with Kiselak coming away with the CFL’s most Outstanding Offensive Lineman award. On the other side of the ball defensive linemen Rob Waldrop and cornerback Adrion Smith both made their way from Memphis and linebacker Reggie Givens (Baltimore) all made All-Star teams!

That sort of talent infusion is unheard of and it wasn’t even close to the biggest move. The 1995 squad was led by Kent Austin, who’s best years were behind him finishing his one season with Toronto with more interceptions (19) than touchdowns (14).1996 saw the league titling move of Doug Flutie leaving Calgary for the Double Blue. The entire balance of power shifted with that one player transaction.

Flutie, just like Brady transformed the entire franchise. Robert Drummond went from a “good” running back with Baltimore to an all-purpose yardage monster putting up 3700 total yards and 35 touchdowns in two seasons. Pinball (I don’t need to do the full name here do I?) went from team’s leading rusher in 1995 to a change of pace back behind Drummond the bruiser and Flutie the magician. It was in the passing game that he flourished putting up 1,268 receiving yards on 116 receptions, it was the first time in his career he would exceed 1,000 yards. The only star from the 1995 team whose role remained the same was Paul Masotti who topped 1,000 yards in both seasons.

I would argue the introduction of Flutie’s talent into the Argo ecosystem was far more significant than Brady in Tampa. Going from seven wins to 11 is impressive but Toronto’s rise from a bottom dweller to the league’s best team changed the entire league for two seasons. As I said off the top, I didn’t mean to write a Super Bowl/CFL tie in column and make it all about the Argonauts but I can’t think of any better examples over the past 30 years of teams that experienced such radical changes as Toronto did with the arrivals of Flutie and Ray.