O’Leary: Stamps open the door for another Canadian QB 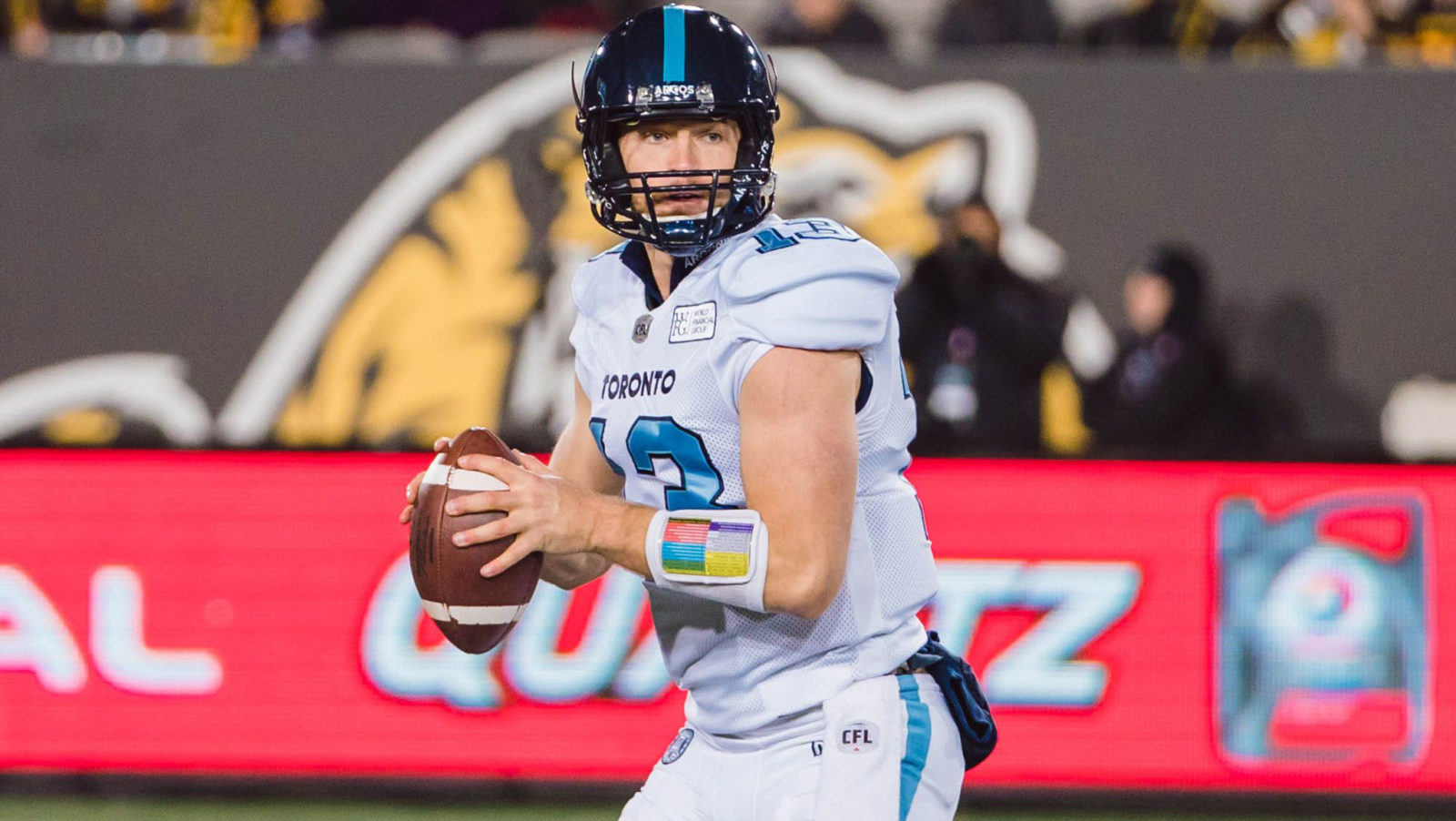 O’Leary: Stamps open the door for another Canadian QB

Dave Dickenson wasn’t scouting as much as he was at the end of a long day and just wanted to watch some football.

The Calgary Stampeders head coach left his office and took a few steps inside McMahon Stadium, where the Calgary Dinos were facing the UBC Thunderbirds. That was the first time Dickenson saw Michael O’Connor in person.

“I wasn’t trying to find a prospect. I was just watching football and he really, really impressed me,” Dickenson said. He was impressed with the chemistry that the Orleans, Ont. native had with his UBC receiver, Trivel Pinto, who oddly enough, the Stamps drafted 12th overall in 2020.

“He makes all the throws but he’s tough. I mean, Calgary was hitting him and he just stood in there and delivered.”

“Then interviewing him and watching him in person, I’d really not seen him. He’s a big man and I believe his accuracy and his arm strength are very comparable to any quarterback in our league,” Dickenson said.

“Now he just has to get the experience, the coaching and do it on the field.” 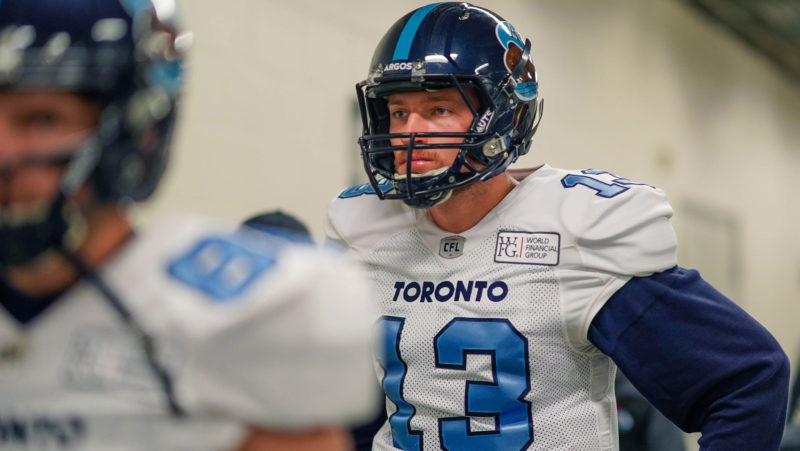 In Calgary, Michael O’Connor will go into an ideal situation to learn and develop as a quarterback (Photo: Argonauts.com)

You’d probably get a near consensus agreement that if there were a place that a young quarterback could get those things, that it would be in Calgary. The Stamps announced on Tuesday that they’d signed O’Connor, after he spent the 2019 season with the Argos.

When the 24-year-old plants his six-foot-five, 205-pound frame down in the Stamps’ quarterback room this year, he’ll have an abundance of resources at his disposal. He’ll have a pair of hall of famers in team president and GM John Hufnagel and Dickenson. His quarterbacks coach, Marc Mueller, had a brilliant U SPORTS career at Regina and has blossomed into one of the league’s young, promising minds.

“We think we’re a quarterback-friendly system and we think we can design some things that fit our quarterbacks,” Dickenson said, perhaps supplying an all-time great understatement.

“It’s kind of like three generations, almost. You’ve got Huf, certainly his experiences in the NFL and (with) some of the big timers and then myself and then Marc is the younger generation.”

Then there’s the guy at the top of the QB depth chart, Bo Levi Mitchell.

“Bo doesn’t get enough credit for his mind,” Dickenson said.

“I think everyone talks about how great his arm is but Bo, reading blitzes and coverages, he sees the field so well because he’s studying and doing the extra work that no one else sees. I don’t think he gets enough credit for that.”

O’Connor will get the chance to gleam knowledge from some of the CFL’s top minds. What should be most enticing to him is the fact that all of the spots on the QB depth chart behind Mitchell are blank at the moment. The Stamps have former Argo Dakota Prukop on their roster and will bring in Jake Maier and Marcus McMaryion to start the season.

“No matter what happens it’s going to be a super inexperienced room but a room where I think anyone there feels like they’ve got a chance to get on the field,” Dickenson said.

“Bo’s our guy but I know if it was me, every chance I had to get to the backup, I felt like I was close to getting in the game. It’s not that easy when you’re the third string. That’s a whole different feeling. (You think), we’ll see how this year goes, but it’s not a great feeling.”

While there were likely fans in each market across the league hoping to see O’Connor land with their team, it shouldn’t be entirely surprising that Calgary ended up signing him. The team has had an eye toward developing Canadian quarterbacks over the years. Brad Sinopoli started his career in Calgary in 2011 but ultimately shifted to receiver in 2013. The team had designated former U of C QB Andrew Buckley as Mitchell’s backup until Buckley decided to go to medical school in 2018.

“I’m not going to lie that I’m not hopeful that a guy takes the reins and runs with it that’s got a Canadian passport,” Dickenson said.

“But as a professional football coach, you’re never going to put yourself out there and play a guy that doesn’t deserve it. Yeah, maybe we take a harder look at Canadian guys. I like it because usually the guys we’ve been looking at are all familiar with the CFL game, which is different. Your skill set can make you successful in the CFL and maybe doesn’t as much in the NFL or the American game and vice versa. If you’re really successful at the American game, sometimes it doesn’t always translate over here. To me that’s a positive for the guys.”

In Calgary, O’Connor will walk into what looks to be an ideal situation. He joins a highly successful organization and will get to battle for the No. 2 spot, behind an elite veteran that can teach him a lot.

“I’m excited to get him in here and see what he can do but I warned him when I talked to him,” Dickenson said.

“Most of the guys, none of them have taken a snap with us. It’s a wide open competition and you just have to take advantage of your opportunities.”

The Canadian quarterback will always be that albino moose for CFL fans, until one has a breakthrough and potentially more come through to make it commonplace.

“There’s good enough players. I mean, Nathan O’Rourke is a good player, BC drafted him. It’s going to happen. There’s just more Canadian football players I think that have closed the gap. You can see it in the NFL and it will happen up here.

“It’s just one of those things where it’s hard because any time you’re labeled something, you get a little extra pressure and that’s what I told Michael.

“You’re just a quarterback trying to earn a job. Don’t think you’re carrying the mantle for anything more than that. It won’t get talked about much, to be honest with you after today because we’re just playing the game to try to win.”

The conversation may end on the day of O’Connor’s signing in Calgary, but it will continue among Canadian football fans for some time.