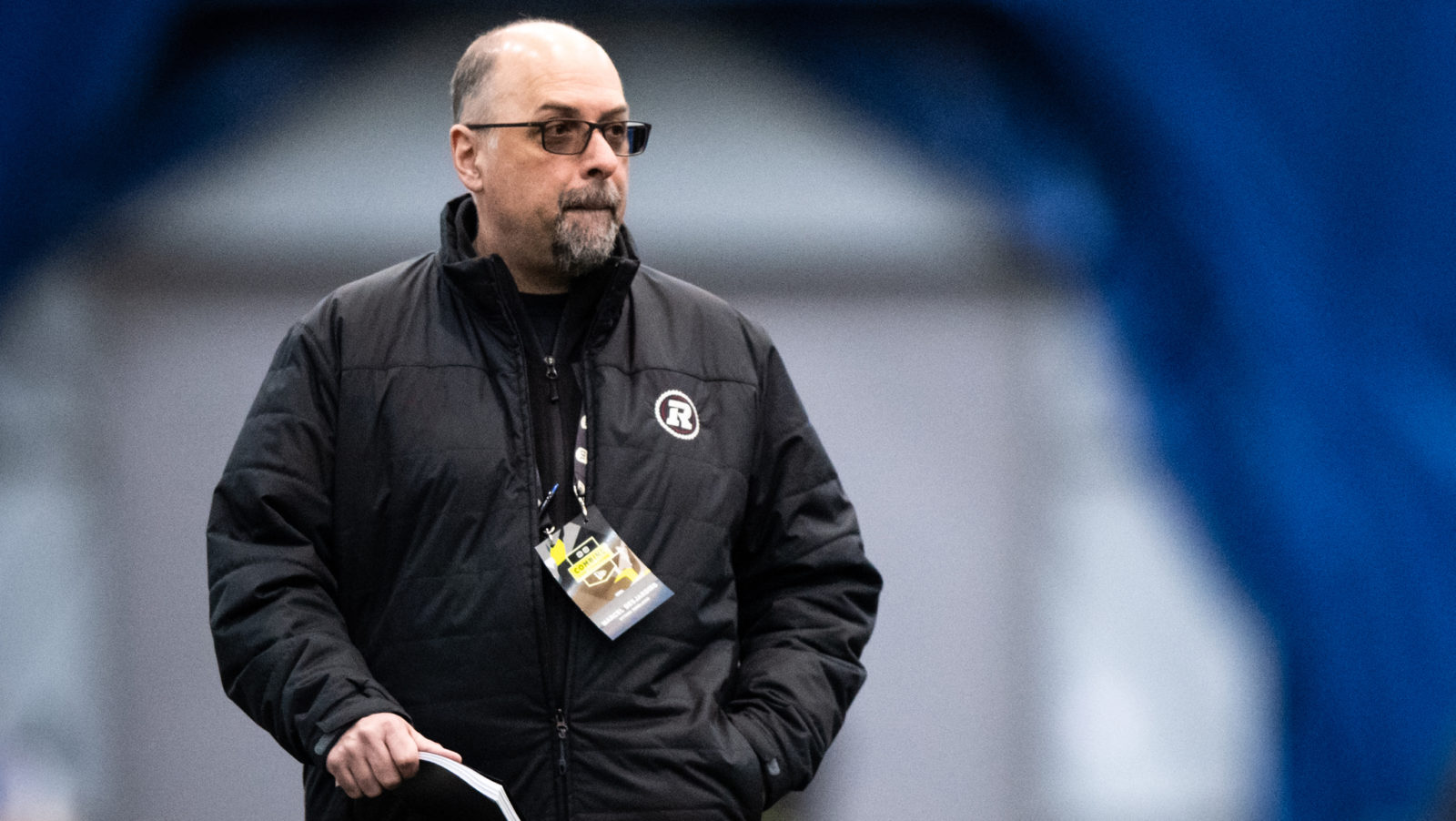 Maybe it hasn’t been what you’d call the sexiest of all the off-seasons had by CFL East teams. Not the splashiest of free agency periods.

All the headlines, it seems, went to the Toronto Argonauts and Montreal Alouettes, for their acquisitions, raiding the campsites of other teams for their rations the way they did.

Lots of love, too, to the Hamilton Ticats, for safely securing the supplies they already had on hand. The cream of the crop in the division, the Ticats locked up almost all the star power that had carried them to a 15-win regular season and a berth in the Grey Cup Game.

And then, there are the Ottawa REDBLACKS. 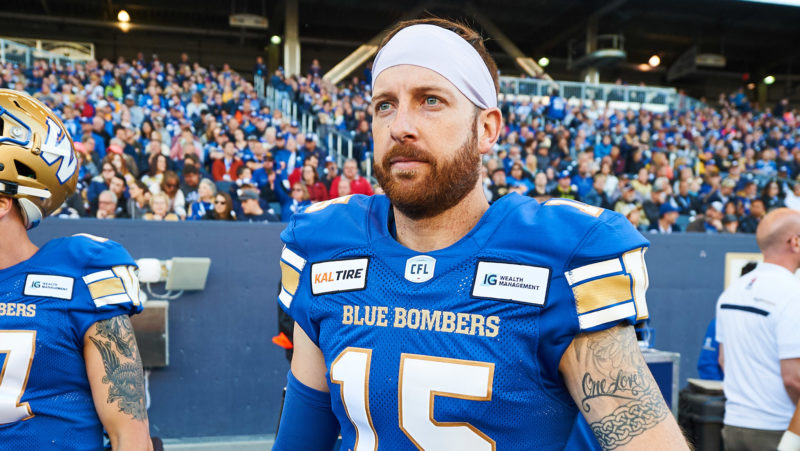 Matt Nichols signed with Ottawa after his release from the Toronto Argonauts earlier this year (BlueBombers.com)

It’s not as though they didn’t grab a headline when they decided to part with quarterback Nick Arbuckle, opting to bring in veteran Matt Nichols to be their pivot of choice.

It’s just that, compared to the other teams in their division, the announcements that came were not quite as mind-blowing, is all. Not that there weren’t some good gets. There were. Micah Awe signed last week, energizing the linebacking corps. Defensive lineman Stefan Charles agreed to terms, bolstering the beef on the interior of the defensive line. Nose tackle Davon Coleman does the same.

And the REDBLACKS, like most CFL teams, were able to extend the contracts of a good number of their own potential free agents, some of whom, like kicker Lewis Ward and punter Richie Leone, would have been seen as pretty gaudy signing announcements had they leapt to new cities.

Compared to the shopping sprees of the Als and the Argos, though, the REDBLACKS’ looks rather economical. And that’s fine. General Manager Marcel Desjardins basically likes the look of things, and he’s not expecting any big announcements to materialize, even with a number of well-known veteran free agents still searching for deals.

“We’re probably as set as we’re going to be,” says Desjardins, “because we cannot really go into getting a guy that’s a six-figure guy, right? I mean, I know there’s one or two of those guys still floating out there who would be looking for that kind of money and we’re just not… we can’t live in that world right now.”

There are some questions that need answering. Along the offensive line, in the defensive backfield and at receiver, to name three areas in particular. Those questions will have to sort themselves out in training camp, says Desjardins, and he’s confident they will.

Desjardins, who is heading into his seventh season as Ottawa’s GM, is satisfied with his team’s defensive line, with players like Cleyon Laing and Coleman set to anchor the interior, along with Charles, the NFL veteran who signed with Edmonton towards the tail end of the 2019 season but who has yet to play a down in the CFL. Many have been itching for a long time to see Charles do his thing, ever since he memorably dominated the one-on-one drills during the CFL combine back in 2013.

With Coleman in place, highly-regarded tackle Michael Wakefield slipped away in free agency, signing a deal with the Alouettes. Desjardins would’ve like to have kept him, but saw Wakefield in a back-up or rotational role, and he says he couldn’t commit the bigger dollars Wakefield most certainly got in Montreal.

“We wanted to have him around but we couldn’t pay him six figures just to be here,” says Desjardins.

“We have three pretty damn good guys, interior, we think,” he continues, pointing to returning defensive ends Avery Ellis and Danny Mason as stalwarts who should be able to bookend that interior depth very well.

Behind the line, there is a trio that will see Avery Williams – re-signed by Ottawa a few weeks ago – as an anchor along with SAM Don Unamba, who was first signed by Ottawa in preparation for the 2020 season and then re-signed last week. Added to the mix is the hard-hitting Awe, a fairly splashy FA signing, one would have to say.

“All those guys have played a lot,” says Desjardins, anticipating good things from the trio. “We feel we’re in a good place where those guys are concerned, where the defence is concerned.”

The secondary sees the return of veteran Abdul Kanneh, whose diving, barely-got-him tackle in the late stages of the 2016 Grey Cup Game got the REDBLACKS to overtime in a game they ultimately won. With Safety Antoine Pruneau gluing things together at rover and the likes of veterans Corey Tindal and Sherrod Baltimore in place, Desjardins reasons the secondary is in good hands, with a question or two to be answered in camp.

There has been some disappointment, in some quarters, expressed over the REDBLACKS’ less than boisterous participation in the receivers derby this off-season, but Desjardins figures he has a good group for Nichols to target in 2021.

In Jalen Saunders – first signed a year ago and now re-signed after he opted out of his 2020 contract – the REDBLACKS may indeed have a straw that can stir a good drink. Certainly, that is what Saunders provided
when with Hamilton for two seasons, before being released by the Ticats in 2019. “He could be a very dynamic player,” says Desjardins of the shifty and speedy veteran.

“We’ve got three or four other guys that that we had back in 2019, who might be able to fit the bill,” continues Desjardins, mentioning DeVonte Dedmon and pointing out that R.J. Harris kept on emerging, even as Ottawa’s offence stumbled badly in 2019. “And new guys that we’ve signed, (Canadian Daniel Petermann, ex of the Winnipeg Blue Bombers would be one) as well, that we’re excited to see.”

As for the ever-clutch Brad Sinopoli, Desjardins is counting on bigger and better things in an offence designed by Head Coach Paul LaPolice. After four consecutive thousand-yard seasons, the trusty game-breaker fell to just 671 yards in his most recent campaign.

“I like our receivers. I think they’re going to surprise some people.”

It will be up to LaPolice, of course, to get the most that he can out of the group, and with the versatile Anthony Coombs on the roster, you can bet that the creative, weaving, unpredictable offence – which has become LaPolice’s trademark – will be in evidence in The Capital in 2021.

The decision to bring in the 33-year-old Nichols – a quarterback with whom LaPolice is very well-acquainted, of course – might well have been made a year ago, had Nichols not been in the middle of rehab after having surgery to repair his throwing shoulder. At that time, his complete recovery was still in question.

“If Matt had been healthy a year ago, who knows if we ever go down the path with Nick,” says Desjardins, who believes the re-marriage between quarterback and offensive coordinator will be a boon for the REDBLACKS, with operational protocols still uncertain as the Covid-19 pandemic rolls on.

“(It was) knowing that there’s a possibility that we may not start on time and have a shortened training camp,” explains Desjardins of the switch from Arbuckle to Nichols, “and how much more beneficial it would be to have a guy who’s in step with the head coach/offensive coordinator from the get go could get us, you know, further ahead coming out of camp than we otherwise might be.”

And so the REDBLACKS cast their eyes towards the near future, with Desjardins expecting training camp to provide suitable answers to any of the questions that remain in setting a final roster.

As far as a ‘to-do’ list, there is nothing written in big, bold marker on a white board somewhere, other than, perhaps, ensuring that the REDBLACKS have a good pool of American offensive linemen. With Canadian free agents Evan Johnson and Jason Lauzon-Séguin heading to Saskatchewan and Montreal, respectively, Ottawa is expecting to go with two American Offensive linemen for the upcoming season.

“I think we’re where we’re gonna be, honestly,” confirms Desjardins. “I mean just cap-wise, we can’t really allow ourselves to do a whole lot more. At least not with guys that are making a significant salary. If it’s players that want to come in and compete, maybe beat out somebody else who’s making the same amount of money, that’s a different discussion. But there’s not too many of those guys floating around either.”