The untold story of Ken Whitlock, the first Black Argonaut 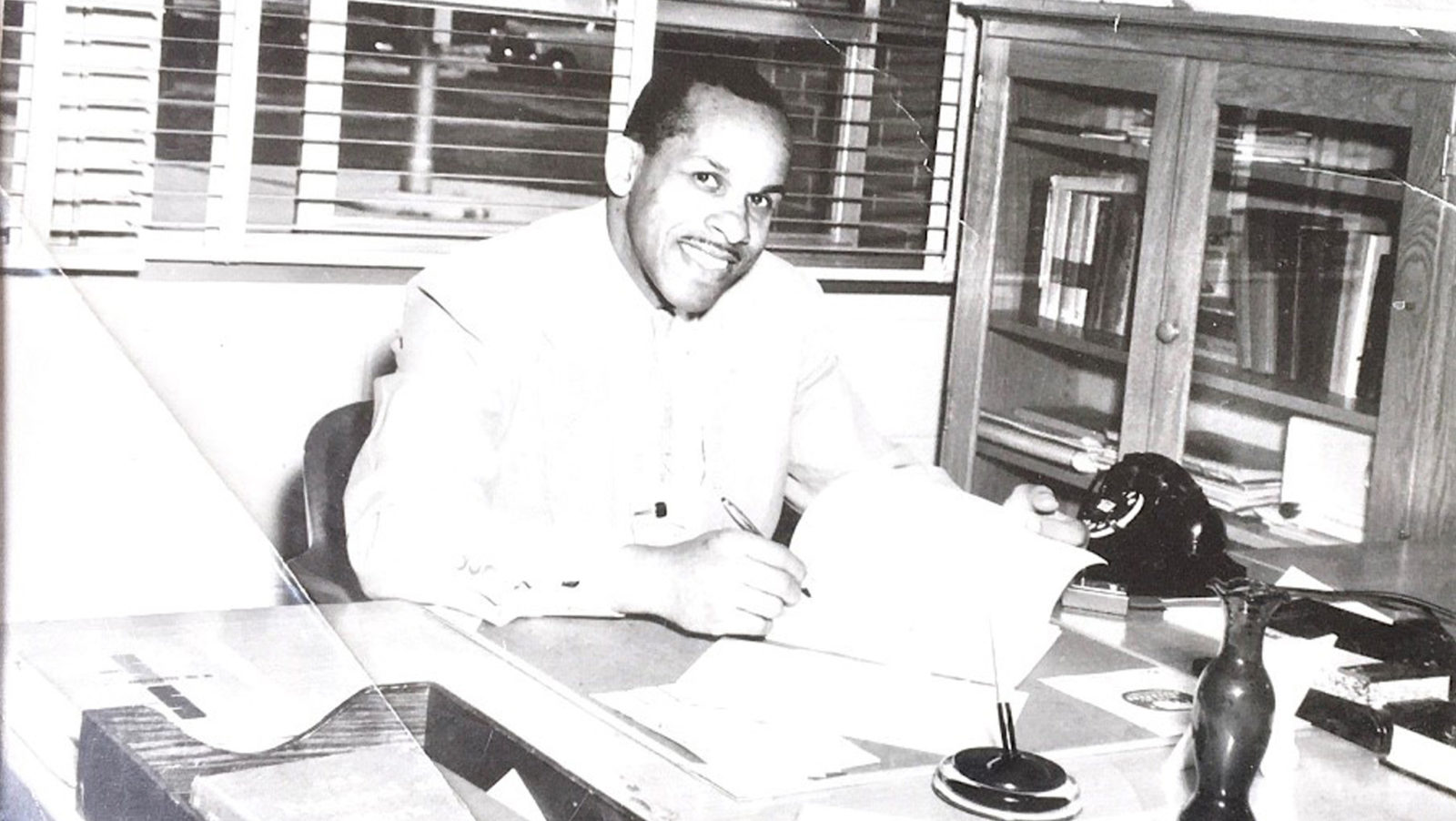 The untold story of Ken Whitlock, the first Black Argonaut

Photo courtesy of the Whitlock family

When a team has played for almost 150 seasons, it’s not surprising that many players have faded from memory, simply forgotten over time. Sadly, that’s happened to Ken Whitlock Sr., though it shouldn’t be the case as he played a significant role in the history of the team.

He was the first Black player for the Toronto Argonauts.

Ask most fans who the first Black Argo player was, and you’ll likely get a blank stare in return. Others would guess Ulysses Curtis, the offensive dynamo who broke in with Toronto in 1950. When the All-Time Argo great passed away in 2013, obituaries cited him as the first African-American to play here.

But it was Whitlock who was the original Black Argo. As one could imagine there’s much more to the story of a man who suited up for just four games for the Double Blue in 1948, the year after Jackie Robinson broke the colour barrier in Major League Baseball.

Whitlock was born in 1920 in Sewickley, Pennsylvania, a borough just a bit northwest of Pittsburgh. Though Western PA is a long way from the deep south, it wasn’t immune from the stench of racism.

“We couldn’t go to the movies or even (play on) the YMCA’s grass,” Whitlock told the Sewickley Herald in a 2005 interview. “This wasn’t just Sewickley, it was all of Allegheny County. We weren’t even allowed to try on shoes. Women weren’t allowed to try on dresses or even go to most parts of Pittsburgh. We weren’t allowed to go to the Sewickley Theatre at all; we had to go to Coraopolis (a borough located across the Ohio river).”

Blazing the racial trail was not uncommon for the Whitlock family, as Ken Sr. eventually became the first Black Marine from Allegheny County, while his father, Frank Whitlock Sr., was the first black athlete to play football at Sewickley High School in 1906.

Ken Sr. was like his dad, he loved sports. He played football and baseball and earned a scholarship to Virginia State College.

Argonauts.ca was able to track down Ken Whitlock Jr., now a teacher in Massachusetts. He was able to share several stories about his dad’s life via Ken Sr.’s autobiography “Breaking Barriers,” published in 2000 when he was 80, a full dozen years before he would pass away.

When the elder Whitlock’s college days were done, he was given some advice that sent him across the border.

“In June 1948 a high-school teammate, Bates Ford, suggested I try out for the Toronto Argonauts,” wrote Ken Sr. “With professional football in America still mostly segregated, I saw this as a way to make it in the world of sports, a world that was closed to me in the States. I made contact with the head coach, Ted Morris, who advised me to come up and try out and sent me one-hundred dollars for transportation.”

This sounded like a good idea, so Ken, his wife Betty and the one child they had at the time, Linda – who Ken Jr. says took her first steps in Canada – hopped in their ’37 Dodge and headed out on their northern adventure.

“We were excited because this seemed to be a big break for me,” he wrote. “The team needed a punter and I knew I was the best they were likely to see. They knew I was a black man, yet they were still willing to give me a tryout.”

The Whitlocks were given a warm welcome when they reached their destination.

“When we arrived in Toronto we made our way to the address Coach Morris had given me, it was his mother’s residence and she greeted us cordially. The coach and I left almost immediately for the practice field. On the way he informed me the only people who knew I was coming were him, the owner (note: the team was then operated by the Toronto Argonauts Rowing Club) and the manager (Earl Selkirk). He would introduce me to the manager, who gave me a locker and the necessary attire for practice.”

After warming up with a few laps it was then time to hit the field. While Whitlock was also a halfback, it was his kicking prowess that Coach Morris was most eager to witness.

“Coach gave me a centre and assigned someone at each end to catch the ball and asked me to punt a few,” wrote Whitlock Sr. “The first punt was about 55 yards, the second and third punts were about 60 yards, each punt was high and travelled like a projectile with a hang time of five or six seconds. As I demonstrated my skill the entire team, one by one, discontinued their drills and ventured over to watch. There wasn’t a black face among them. After about ten punts the coach told me to stop because he was worried that I would get tired. The next ten punts were between 60 and 70 yards and by the time I was done I was on the team.”

The success punting the football shouldn’t have surprised anyone assembled on that day.

“He was a Coloured All-American in the CIAA,” Whitlock Jr. told Argonauts.ca. in a phone interview. “He was a really well-known player at Virginia State College, a halfback and a punter. He was proud of the punting records he set.”

The date that Whitlock would become the first Black Argo was appropriately July 4, 1948, American Independence Day. It was a pre-season game played in “110-degree heat.” Wearing No. 76, his day was highlighted by an interception he said he returned 60 yards before being tackled at the five-yard line.

He played in the defensive secondary in the second pre-season game but injured his shoulder on a touchdown-saving tackle, tearing his supraspinatus. He decided against going under the knife.

“To fix it would require surgery and I would be out for an indefinite amount of time. I decided not to have the operation.”

Things went downhill from there for Whitlock. He would play in a total of just four games, scoring one touchdown while adding punting duties, but it wasn’t working out. If the injury kept him out of the lineup for the rest of the season, he would be paid for two weeks and travel expenses home.

James Fraser is an Associate Professor of History at the University of Guelph, though to Argo fans he’s probably better known as the man behind the @BygoneBoatmen Twitter account, a remarkable reminder of days gone by.

Needless to say, he’s one of the few who knew Whitlock’s story, having researched it for an article. He had learned that Whitlock was the third Black player Morris had attempted to sign, but the first to make the team. 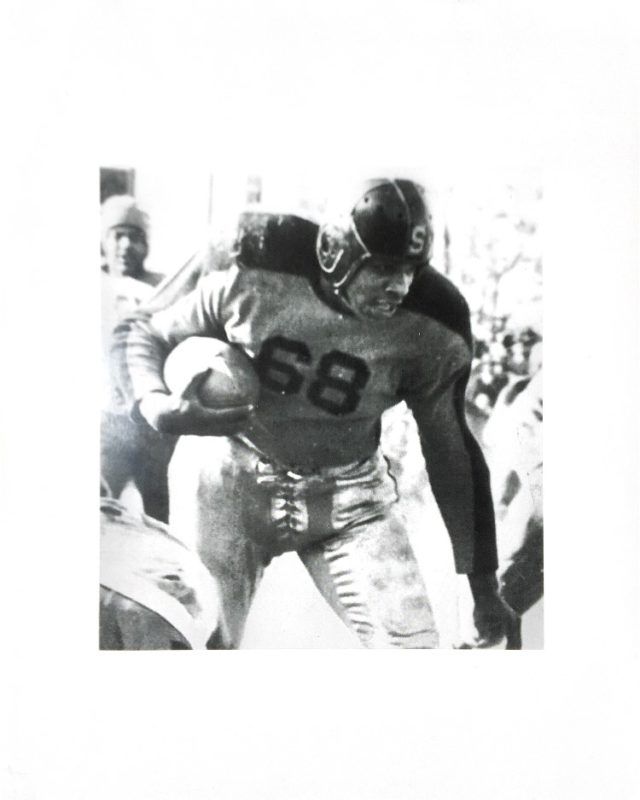 “When he was let go, it was a very quiet affair,” Fraser told Argonauts.ca. “It (his signing) was big news to begin with, but when they let him go it was quiet. Morris’ principle was that an import had to be clearly better.”

As a back, he wasn’t better than the established Joe “King” Krol, the player he was brought in to back up. Krol wasn’t just good, he was great; one of just four players in the 148 years of the team to have his number retired.

Fraser’s research found that Whitlock’s on-field performance was slipping, and as we’ve now learned was in all likelihood due to the injury.

“The dream ended quickly for Ken Whitlock,” Fraser wrote. “A week after sweeping the home-at-home versus the Cats, the Argos were thrashed 32-12 at home by Ottawa in front of almost 20,000 humiliated witnesses. When a serious foot injury sidelined (Hall of Famer) Royal Copeland, the rookie filled in with disastrous results. He had worked well with Cope in previous games in place of Joe Krol, but in Cope’s place he just could not click with the King himself.”

“He failed to complete a pass. Worst of all Whitlock gifted the Riders a touchdown when he fumbled a punt, and a second major score when he misplayed another punt. The press pulled no punches in passing stern judgment on the rookie’s performance. On September 21, Ted Morris told reporters that Ken Whitlock had been released. He reserved all other comment except to say that ‘The Argos (have) returned to their all-Canadian status.’”

The career of Ken Whitlock ended after it had barely begun.

“This had not worked out the way I had dreamed it would,” wrote Whitlock. “I’d been brought in as a punter, but it was beginning to look like I’d be nothing more than a secondary back. The first-string punter was not only related to one of the board members, he was also a Canadian and a white man. Whether this had anything to do with keeping me as a secondary back or not, I didn’t know, but for a hundred dollars a week this wasn’t what I really wanted in my life. Betty and I decided we would talk it over, because we wanted to go back to the States.”

So ended the career of the first Black player in Argo history. 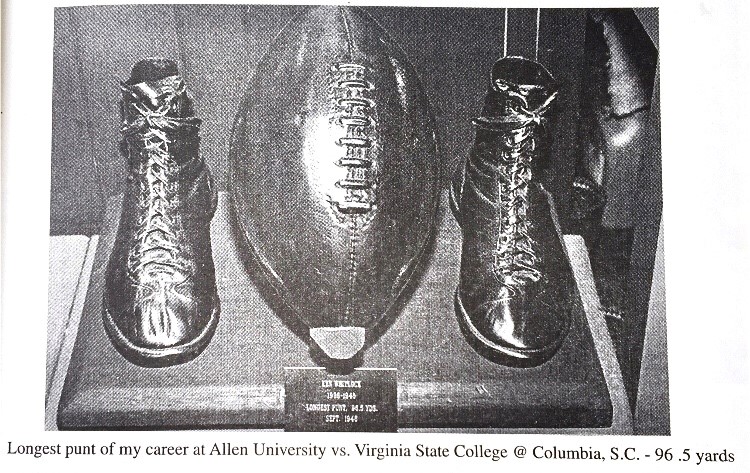 An outstanding player at Virginia, Whitlock came to Canada looking for an opportunity to play pro football when one wasn’t available in the U.S. (Photo supplied by the Whitlock family)

“He blazed the trail,” Fraser explained to Argonauts.ca in a phone interview. “Not only as the first Black player, but as the first American player (in quite some time) as well. I think it’s not a coincidence that three years in a row he (Morris) was looking at a Black player to bring onto the team. For a guy who wasn’t interested in imports at all, I think he must have felt there was some reason why he felt he should give black players a little bit more of a break.”

“I don’t think it was a P.R thing,” Fraser continued. “People might think these days it was from a kind of liberal response. His idea was that he only wanted imports if they were absolutely better players than any Canadian player.”

His All-Canadian theory had worked, as the Argos had won the Grey Cup in each of the three seasons before Whitlock’s arrival, but the signing showed Morris was ready to adapt to change if and when the right player came along.

Ken Whitlock Sr. passed away on January 31, 2012 at the age of 90. Though his brief career may have been mostly forgotten, his words and contribution to the Toronto Argonauts shouldn’t be.

“Young people don’t know what went on in the past,” he told the Sewickley Herald. “It’s important for all races to know what happened because racism is still going on today. What I want is for kids to think. Just to think.”