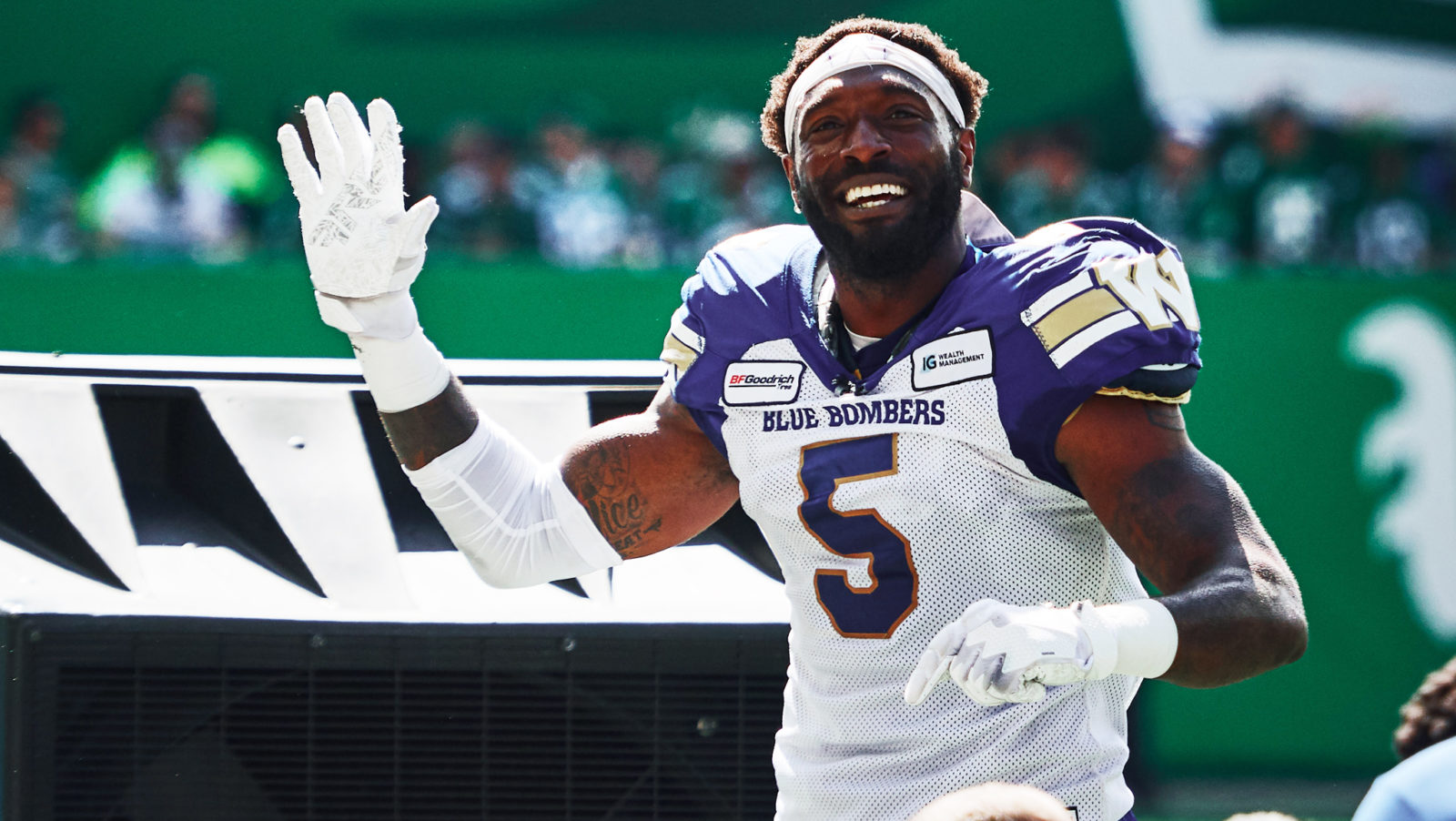 I love it when my two favourite sports worlds collide. When I’m at a curling event and I see somebody in the crowd with a CFL jersey, I smile. When I see some CFLers out on a sheet of ice, attempting to play for the first time, it warms me up.

With The Brier about to begin, and with The Scotties having just wrapped up, on Sunday, I’d like to take the opportunity to force a collision between those two sports, and recruit a few CFL players for a curling team.

First, though, a few thoughts on the similarities between two worlds that I dearly love.

RELATED
» Cauz: Discovering football gems while re-watching the 1954 Grey Cup
» Catching On: Receiver that could benefit from a change of scenery
» O’Leary: The Golden Globes meet the CFL

There’s something kindred, for me, about the CFL and the sport of curling and I’m betting I’m not alone in that. Quintessentially Canadian, I guess, for one thing.

For another, they share similar traits, these two. One where the players are almost always friendly and approachable, happy to spend time with fans, and take as many pictures as you want. If you’re a CFL fan, that’s very likely one of the things that makes you proud of the league, and dedicated to it. Strong, personal relationships. I can assure those of you who aren’t immersed in the world of curling, that the same kind of relationship exists there.

At both places, rivals merrily mingle and give each other a good-natured hard time over their respective teams. At both places, those rivals know they are also family. They celebrate the game they love, and the people who love it right along with them.

One more important link between the Patch (and the Heart Stop Lounge at The Scotties) and Grey Cup festivities. At all of them, every once in awhile, someone’s gonna yell “Sociable!” And everybody drinks.

Okay. Let’s build a CFL curling team. I need four players, an alternate and a coach.

First off, I guess if I’m serious about winning with a CFL curling team, I’m making Edmonton kicker Sean Whyte my first pick. Easy. Whyte has long shown a love for curling – you need only check his Twitter timeline to see that – and might actually be a half-decent player, though I’ve never personally seen him throw a stone. But since starting the process of tossing a rock is called “kicking from the hack,” he’s a natural choice. Besides, he’s friends with lots of curlers, getting tutorials from the likes of Rachel Homan every now and again.

By the way, if I’m going the other way with this, and choosing curlers to be on my football team, I’m going hard to recruit Homan. Whyte says he once watched her kick a 45-yard field goal on a bet, a few years ago. And the Ottawa-born skip just played the entirety of the Scotties while 8-months pregnant, making the final, and very nearly winning the thing. Damn right Rachel Homan’s gonna be on my football team.

For the rest of my CFL curling squad, I believe I’ll think outside the box a bit. I need a mix of raw, sculptable talent, and the right kind of personality.

Since I just mentioned kicking from the hack, I’ll follow up on that theme and nab Winnipeg defensive lineman Willie Jefferson. While a good curling team needs a shooter or two who can make the soft, delicate shots, it’s absolutely imperative that it have a demolition artist, too, a player who can hurtle out of the hack at great speed and fire stones that blow the opposition’s rocks off the sheet. Willie defuses all the best-laid football plans with line of scrimmage pass knockdowns. That’s kinda like a triple-peel, in curling. As well, with that explosive first-step of his, the velocity he’d generate with his leg drive from the hack would be insane.

Every team needs to have the brains of the operation. Increasingly, shotmaking decisions in curling are becoming more and more a democratic process among all the team members, but, you still need that one player who sees things on a different level, who is so smart that even the other smart guys I’ve recruited will say “damn, that guy is smart.” 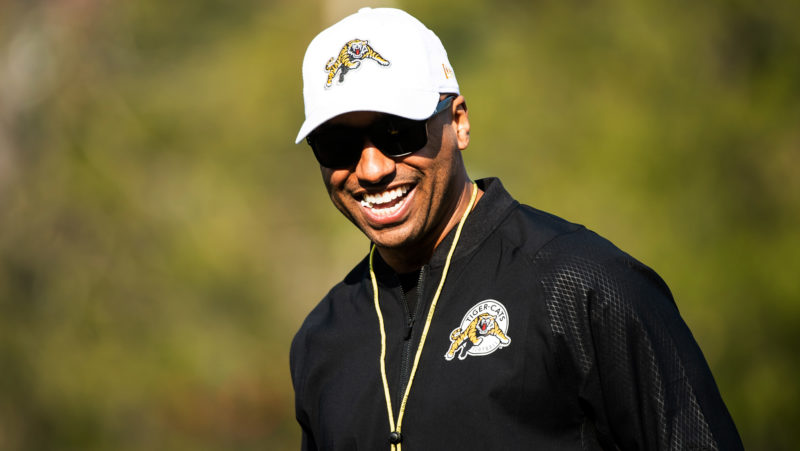 Hamilton Ticats’ coach Orlondo Steinauer gets the nod here. I mean, he was kinda coaching even while he was still playing at an all-star level, so he’s used to doing both at the same time. And almost everybody agrees that he is very often the smartest guy in the room. An elite curling team has to physically execute on the ice, absolutely. But when the competition is fierce and equal in that regard, the team that wins is gonna be the one that outsmarts the other one.

You might say that Steinauer ought to be the coach of my curling team and that’s fair enough. But, I want him on the ice at all times, because you only get two time-outs in a ten-end curling game, when the coach appears to sort things out with the players. And I want Ottawa Head Coach Paul LaPolice to be that guy. Because those time-outs are usually taken when things are dicey and complicated, with rocks strewn all over the ice. It’s the perfect time for creativity. I love crazy shots, like angle-raise-doubles and double-raise hit-and-rolls, and I just know that LaPo’s gonna suggest those every time he opens his mouth.

I firmly believe that every curling team needs a happy-go-lucky personality in the line-up, too. Somebody who has a talent for the game, yes, but also the ability to lighten the pressure-packed situations as they come up. Also to make road trips and post-game drinks more entertaining. That kind of player is essential in team-building, in both football and curling. Probably in all sports. I’m thinking of the guys that I’ve seen have fun during a CFL practice week, but who also show up big-time for the game and just kill it. And love every minute of it. Looking at You, Charleston Hughes. Grab a broom, bud. With you and Willie on the front end, sweeping furiously, we’ll manipulate shots like we’re using a joystick.

So, I’ve got four players and a coach. There’s one more thing.

Curling teams need an alternate. A fifth player who’s ready to step in to give one of the others a break during a long, long competition week. Sometimes, though, they don’t play at all, so they’ve got to have the ability to park their ego and do whatever it is that the team needs.

So, you can give me any special-teamer in the CFL. Any of them. That’s all they do for their teams already, giving what is asked of them, most often without the glory, and rarely with any complaining. Llevi Noel, Jean-Philippe Bolduc, Charlie Power, Nigel Romick, Derek Jones, Jean-Samuel Blanc, Mike Miller… on and on it goes.

There you have it. In celebration of the season of national curling championships, my CFL rock squad.