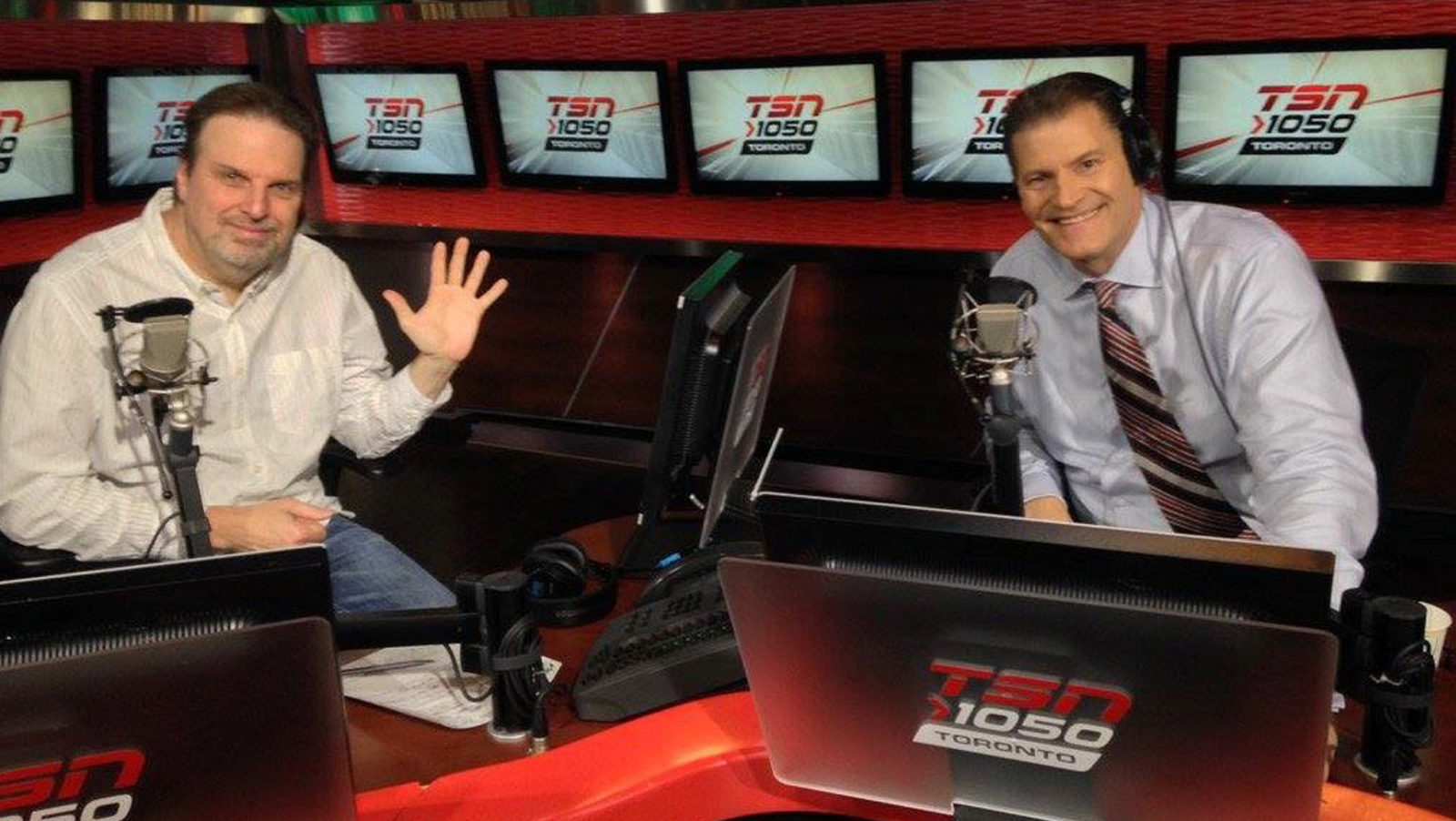 Mike Hogan remembers the early days, when the studio was a new world to Chris Schultz and for the briefest of moments, a completely uncomfortable one.

Schultz, then an offensive lineman with the Toronto Argonauts, was recovering from a knee injury he suffered in Edmonton at the start of the 1993 season. He’d landed some radio work to fill the time.

“Schultzy was afraid of the microphone,” said Mike Hogan, the guy in the seat opposite of Schultz at the Fan 590 in Toronto.

It didn’t last long. Schultz played in 1994 and was back on the airwaves in 1995, getting better at his new job by the day.

“When he learned how to laugh on the air, that was the best thing in the world,” Hogan said.

“The more that he started to laugh and realize, ‘Hey, this is fun, radio is supposed to be fun,’ the more reps he got, the looser he became on the air, the better he became. He went from being this six-foot-eight, 300-pound lump of tightness into this guy who could articulate the minutiae of the sport without talking over the heads of the average listener, which is remarkably tough to do. But Schultzy was able to pull it off.”

A beloved figure in the world of Canadian football, Schultz, 61, died of a heart attack on March 4. The former Dallas Cowboy (1983 to 1985) and Toronto Argonaut (1986 to 1994) was a fixture on radio and TV, working with TSN on its CFL and NFL coverage for 22 years. He spent the 2018 and 2019 seasons doing colour work for Argos’ radio broadcasts, reunited with Hogan, who is the team’s communications manager and play-by-play voice.

Crushing news last night. We lost my dear friend Chris Schultz. Not too many people have touched my life the way the big man did. Football was his life. We shared so many memories that I will take with me for the rest of my life. I love you Schultzy. Until we meet again RIP 🙏 pic.twitter.com/9Q6RsXz6y0

The words you’ll most commonly hear tied to Schultz are gentle giant. He was a pioneer as far as Canadians playing football, playing collegiately at Arizona and eventually becoming the Cowboys’ starting left tackle before making his way to a stellar CFL career with the Argos. For all of his success and the stature that working for a national broadcaster can bring, there was never any pretension with Schultz. Everyone that he crossed paths with was met with a genuine smile and his giant hand, extended for a shake that would envelope your own.

“He would shake your hand and his middle finger would hit your elbow,” Hogan joked.

“I think like everyone who had a chance to get to know Chris and call him a teammate and a friend, you just are struck by so many of Chris’ qualities,” said CFL commissioner Randy Ambrosie, who played on the Argos with Schultz in the 1987 and 1988 seasons.

“First of all, he’s just such a physically big guy. The first time I met him in the locker room at Exhibition Place…the guy had the wingspan of a condor. You’re literally just amazed at what a big guy he was.

“Then he had this big personality, which you just wanted to be around. It was always nice to get a chance to just talk to Chris because he was a very authentic, very sincere guy. It’s all of those things. You put them all in a blender and you realize that we all suffered a big loss with Chris’ passing.”

I can’t begin to tell you how many laughs I shared with these guys covering the #CFL The Big Man at the end of the desk was our true anchor for 12 years. I will miss you buddy. RIP Schultzy. pic.twitter.com/ggCmQkfEDM

Milt Stegall didn’t get to play against Schultz’s teams, coming into the CFL in 1995, when Schultz was just getting into his post-playing days, but he spent his share of time with him at TSN when he joined the panel in 2009.

“There’s three people who impacted my broadcasting career more than anyone: Tony D’Archi and Jamie Reidel, but the one that impacted more than anyone was Chris Schultz,” Stegall said from his home in Atlanta. D’Archi, a longtime producer and content strategist at TSN, died of a heart attack last month.

“He saw that there was something there in me, it just needed to be brought out. He taught me all the ins and outs of the business, what I need to look for, what type of research all this stuff. He instilled it in me, which has allowed me to do this job for almost 13 years now.”

Stegall appreciated the professional part of the relationship — no one prepped like Schultz, both Stegall and Hogan said — but he came to appreciate Schultz the person even more. He remembers profound conversations with him about life and his family and how Schultz beamed over the impact that his father had on him. Stegall laughed remembering Schultz’s short-lived foray into Twitter and how he thought he was sending direct messages to some people that were unhappy with his football analysis, when they were just regular, choice-word tweets for the public to see.

As anyone that actually crossed paths with Schultz will tell you, he was that gentle giant to a tee. Halftime of a football game is the busy eye of a hurricane for a person working in radio and Schultz had no problem stopping and making time to chat with someone that he’d cross paths with when his time was at its most valuable.

“Schultzy was a guy who wanted to make sure that everybody was appreciated,” Hogan said.

“When he played, he did it with the equipment guys and the therapy crew and the guy that was opening the door for him when he arrived at Exhibition Stadium or at Rogers Centre. He wanted to make sure that everybody felt a part of what the team was doing. That carried on after he stopped playing.

“He always wanted to talk to the board ops and the producers. I don’t know how many times I’d hear him say, ‘Hi, I’m Chris, who are you and what do you do here?’ He genuinely cared about everybody who was making the football team work, or the radio station work or the television station work. He wanted to make sure nobody was left out. That was a genuine part of his personality.”

His kindness and empathy shone through in his years of work with Purolator’s Tackle Hunger program. In 2013, a PR person from Purolator reached out to me when I was working in Edmonton, asking if wanted to interview Schultz about the Tackle Hunger drive taking place that week at Commonwealth Stadium. Thinking there might be a personal angle there, I agreed. What Schultz told me was telling. He said his motivation with the food drives across the country was simply to help people in need.

💔 I met Chris Schultz back when I was a game-day intern for the Argos. Treated me with the same dignity and respect backthen as he did when I got to TSN. Incredibly kind and funny. Thoughts and prayers are with his family during this time https://t.co/pvjOVH1FNx

“It just goes back to the fundamental values that Chris held,” Ambrosie said.

“Chris would give you the shirt off his back. I think that program meant a lot to him because he saw how much it was helping Canadian families. The magic happens when a program like Purolator Tackle Hunger meets somebody whose fundamental nature is to help. That’s what made Chris such a great spokesperson for them.”

“We were big backers of Purolator and Tackle Hunger and there’s no question that Chris was the driving force on that,” said Paul Graham, the vice president and executive producer at TSN. He worked with Schultz for eight years.

He recalled Schultz dropping what he was doing a few years ago for a last-minute opportunity to go to Edmonton to speak at an engagement tied to the Tackle Hunger drive there.

“He readily got on a plane,  a big frame like Chris has and he didn’t complain about it. He wasn’t sitting in business class, I can tell you that,” Graham said.

“Chris just got out there and did his thing and did his speaking engagement and represented Purolator and the Tackle Hunger community in a very positive way. He would not hesitate to work for that initiative and was always first-rate, top-notch all the time.”

Hogan said he spoke with Schultz a week ago. They chatted about mutual friends and the active free agency that the Argos have had. Schultz told Hogan he had an idea for a podcast.

“(We talked about) all kinds of things and every single bit of it was positive,” Hogan said, as the waves of emotion on the day hit him once again.

“He sounded like he was in such a great place. And that’s what makes this even sadder.”