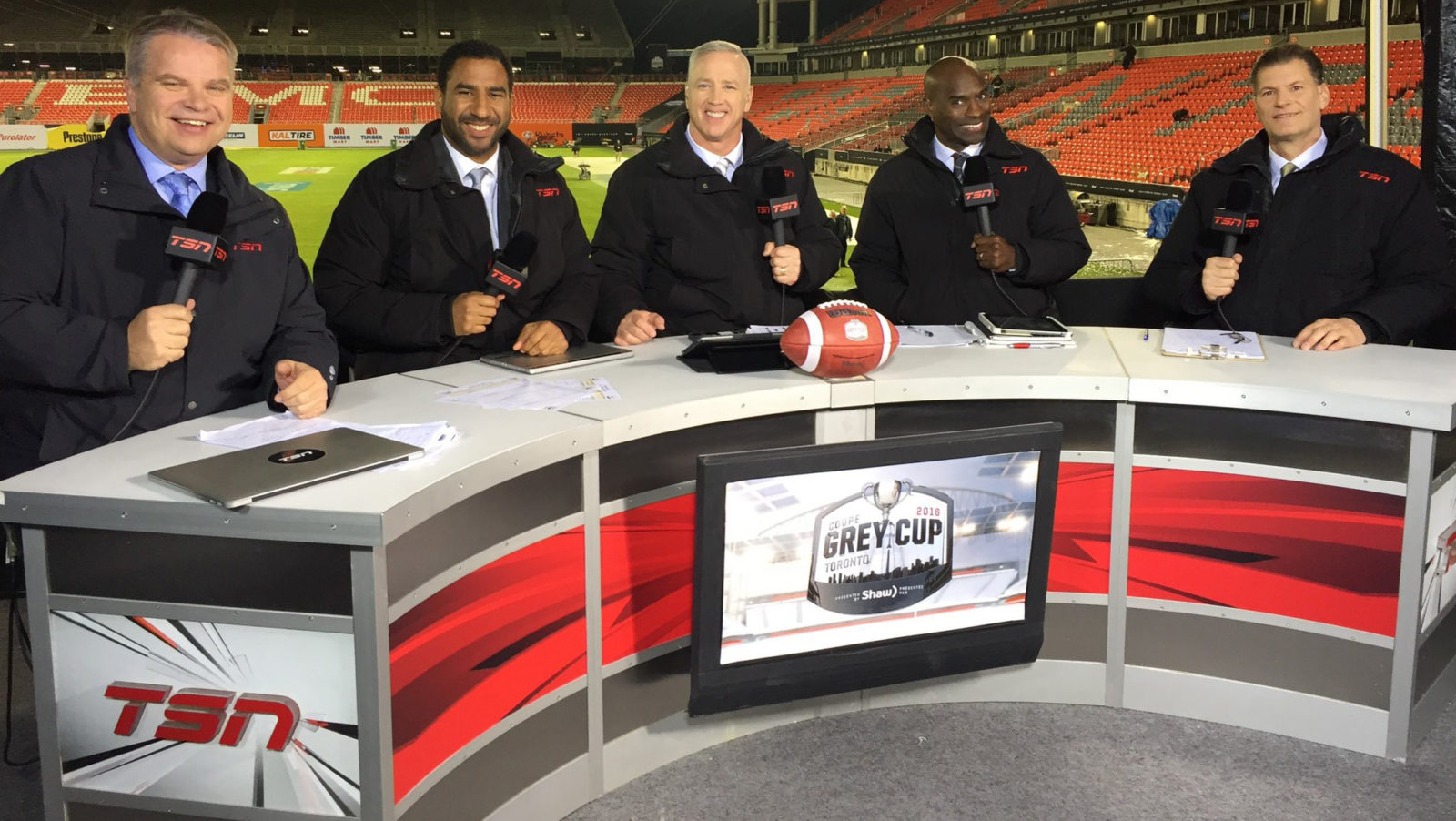 There’s a lasting memory that I have of Chris Schultz, one that brings a smile to my face even as we all mourn the sudden, tragic loss of the big man with the even bigger heart.

It’s not of one moment, but of many, similar ones.

“How you doin,’ Donny,” he’d comically bellow as he walked toward me, greeting me the same way every time, really. As he approached, his right arm would swing back, and he’d wind up for the big handshake that was coming. The big, punishing handshake.

He’d come in hard as that arm swung forward, and sting my palm, knocking my arm back a foot or two no matter how hard I tried to keep it from happening. He’d come close to crushing every single bone in my hand, I was certain. But he wasn’t coming in with a ‘check out the brute physical power I have’ sensibility. It wasn’t macho, alpha-male stuff.

It was a friendly, ‘Damn it’s great to see you again’ energy.

In time, I re-trained him, if you will, to take it easy on me. He’d sometimes wind up for the big, brutal handshake and screech his arm to a halt just before our hands met.

I think anyone who ever had the pleasure of shaking Chris Schultz’s hand remembers the experience well.

And they remember much more than that, too.

In our years working together on the CFLonTSN, I always felt like Schultzy watched out for me the way a big brother would. I’m heartbroken to hear this news #RIPSchultzy https://t.co/bxTIccG2an

The stories are all around us in the wake of the passing of Schultzy, the tributes warm. You see them everywhere. That outpouring is the true measure of Chris Schultz, not his hulking, six-foot-eight frame, though that would be the first thing you’d certainly notice about him. Spend any time at all with him after that initial impression, though, and the soft side of the fearsome, pancaking offensive tackle would emerge quite freely.

Kind, friendly, engaging, thoughtful. So many have stories about him being generous with his time, effusive with his praise, and ready to laugh that large, rattle-the-rafters laugh of his.

I remember being in awe of Chris Schultz when I first met him. That was when I had the good fortune of having my radio career take me to The Fan 590 at around the same time that Schultzy’s media life was beginning. 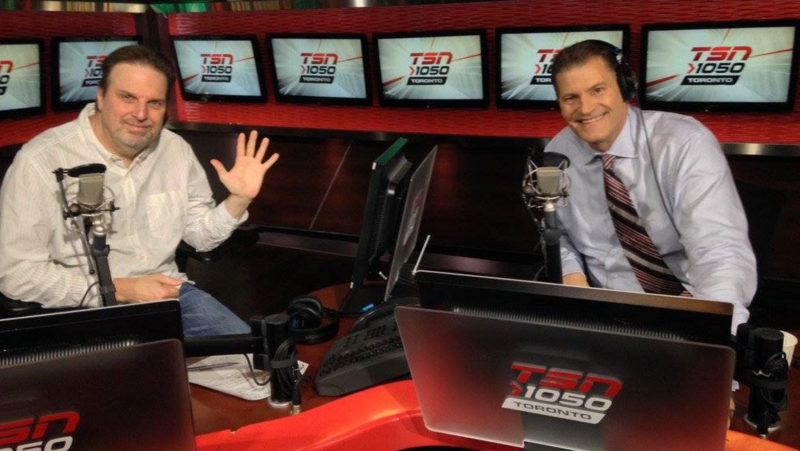 Schultz, seated with Mike Hogan while doing some work at the TSN 1050 studio in Toronto (Photo: Mike Hogan)

My good friend Mike Hogan — instrumental in transitioning Chris from playing field to studio, setting him up for a glittering television career — did a show with Schultzy called Football Fridays. I’d mill about before or after, when I had the chance, to grill the big guy on football personnel moves, technique, anything. And always he engaged me on whatever I brought up. He seemed, I think, to get a kick out of any person who wanted to talk about the game. ‘Oh, you love football? So do I, let’s hang out awhile and love football together.’

By the time I got to co-host a show with him at the Fan, called “CFL Weekly,” Schultzy was already a broadcasting marvel, able to go on at length about any kind of nuance that might come up over the course of a conversation. What you eventually saw and heard from him on the TSN panel, was already abundantly evident.

Not many could make the sometimes overwrought complexities of the game of football so blatantly clear and as easily understandable as Chris Schultz could.

Some of that was just a natural, honed instinct. But not just.

Another friend of mine from the Fan days, Rick Ralph, reminded me today of the thick, thick binder that Schultzy would bring into the studio with him. It was packed with notes and thoughts. So jammed, if I remember correctly, that a few shards of paper would stick out of it as if trying to escape the teeming crowd within.

Preparation and dedication to technique made Chris Schultz a star at the University of Arizona. It made him a Dallas Cowboy for three seasons. And it made him an All-Time Argo – so named in 2007 – as well as a two-time CFL All-Star and a Grey Cup Champion. Preparation and dedication to technique also made Chris Schultz a superb analyst in both radio and television.

It’s a wonderful legacy, but not the truly lasting one that Chris Schultz leaves.

If there’s one thing I can think of that is Chris Schultz’s most memorable trait of all, it’s his empathy. The man was just so often looking to pump up another person’s well-being. Over and over again, he showed he cared.

Whenever I got locked in a lengthy conversation with him, it would be filled with laughter and nonsense and all the answers to all the football questions I could possibly have had. Then, when a lull in the chatter would occur, Schultzy would often look over and ask, seriously, quietly: “How’re you doing, Donny?”

Sometimes, too, he’d just — out of the blue — say something like “you’re really good, you know that?” If I balked, he would insist that I hear it. Insist on it. I’m certain that I’m not going out on a limb here when I suggest that I am far, far from the only one who has that kind of story about Chris Schultz to offer.

That was Schultzy. He might very well destroy you with a handshake on the way in. He’d leave you an inch or two taller on the way out. 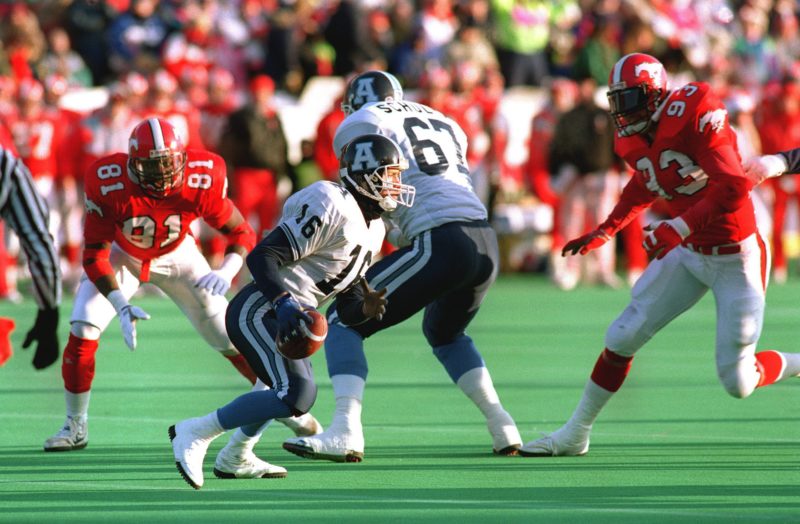 A good sense of humour became a bit of a Chris Schultz trademark as well, even if it did come with a sense of uneasiness at times. That made some things even funnier, seeing the big guy squirm a bit.

Chris liked to tell the story of when he first met Pinball Clemons and how comedically embarrassed Schultzy became in the telling of the story, was gold.

Chris was a veteran, Pinball a rookie when they crossed paths in the Argos’ weight room, back in 1989.

Now, in football — and probably in all other pro sports — there can be a bit of an uneasy relationship between vets and newbies, even if those newbies don’t play the same position as the veteran. That rookie might, after all, take the job of an established buddy of yours.

Schultzy was lifting weights, and in a serious workout mood, not looking for a bit of socializing with a rook. Pinball, being Pinball, bounced up to him to introduce himself and to get to know the big guy.

Chris even did a bit of a Pinball imitation for me at that point of the story; “Hi, Mr. Schultz, I’m Mike Clemons and I just want to introduce myself and tell you I’m so happy to meet you and join the team….”

All that Pinball energy, that we’ve all come to love, seemed impossible to be true. At that moment, Schultzy thought Pinball was either being a big sycophant, or was making fun of him. He never dreamed that it was genuine Pinball love, not knowing anything at all about the young man from Florida.

He dismissed Pinball with great disdain, pausing just long enough between lifting reps, to tersely blow him off.

“I can’t believe the first thing I ever said to Pinball Clemons was (bleep) off,” Schultzy recalled, laughing uproariously at himself.

The two, of course, became good friends. How could they not?