As the news emerged on Wednesday of the CFL’s alignment with the XFL, the reverberation across Canada was immediately evident. Within an hour of the joint statement between the two organizations, both the CFL and The Rock were Top-10 trends on Twitter in Canada.

That part of the equation shouldn’t be a surprise to anyone. While these discussions are still in the exploratory stage, the intent of the announcement was to be upfront with the fans of Canadian football.

“We just wanted to be transparent,” commissioner Randy Ambrosie said, moments after the news was made public.

“We’ve got great fans and we have a great group of players and we thought, ‘Before we get too far along we’ll just let the world know that we’re talking.’ We don’t know what the outcome of all of this will be. But we are excited to be in this conversation.”

Ambrosie covered the origins of these talks, the similarities the two groups have and what his conversations with Dwayne ‘The Rock’ Johnson have been like in an exclusive interview with CFL.ca.

RELATED
» CFL exploring opportunities for alignment with XFL ownership
» The Way Too Early Power Rankings are in
» Steinberg’s MMQB: Meet the woman behind CFL.ca
» O’Leary: Canadian Football loses a giant in Chris Schultz 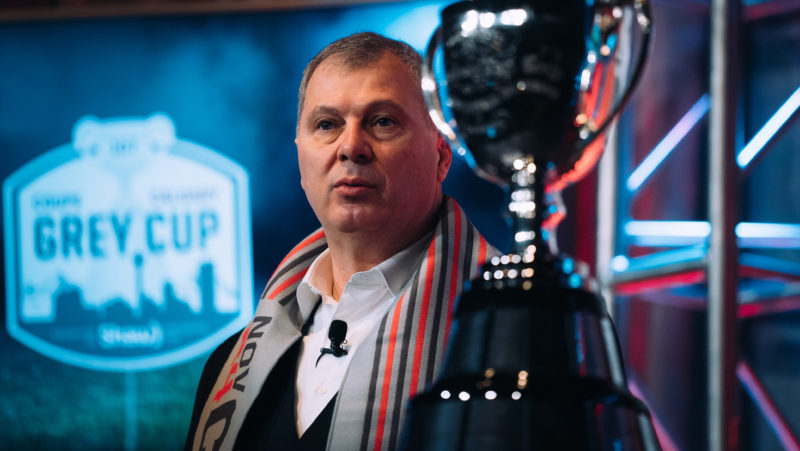 Commissioner Randy Ambrosie speaks with reporters during the annual State of the League address at the 2019 Grey Cup in Calgary (Johany Jutras/CFL.ca)

Chris O’Leary: Can you take us through the process of this alignment, how it came together and where your discussions are now?

Randy Ambrosie: I’m not sure I remember perfectly how all this started except we’ve been talking to the world of football for some time now. Of course in this pause in our own play, it was a part of our everyday routine just to be reaching out to our partners and thinking about the game of football and obviously looking for opportunities to accelerate our success and grow our game.

And it just so happened we ended up in this discussion with the new ownership group at the XFL and immediately found some real alignment with what they want to do and the skills and background of the group.

CO: Where do you think you’re aligned the most? What’s stood out to you in these conversations to this point?

They see an opportunity to use entertainment and perspectives from the world of entertainment to create greater fan engagement and that’s something we’re really very excited about. There were just so many different things that we shared views on and we have similar values, that it was obvious that there was something here.

We don’t know exactly what it is, but for all of the CFL fans over these past four years that have shared with me their hopes and dreams for growing the game — and obviously with a big focus on our major markets, Montreal, Toronto and Vancouver, but all of our markets — now we’re talking with a group that have a particularly spectacular skill set. That’s one of the many reasons why we’re excited to be where we are today.

CO: If you mention the XFL over the past year, people’s thoughts immediately go to The Rock and his involvement with it. He of course has his ties to the CFL and his time with the Stamps in the ’90s before he became a megastar. What do you think his presence does in terms of elevating the profile of this alignment and how can that help the CFL?

RA: I’m going to let Dwayne Johnson speak for himself, but I can tell you my impressions, having got a chance to get to know him a little bit is that his connection to Canada runs deeper than his time in Calgary. His family came to Canada through the Underground Railroad and settled in Nova Scotia. So he’s got this very cool, very long history (with Canada) and then his time in Calgary, his relationship with Wally Buono and how all of it really gave him that springboard to the success that he’s had.

You can feel it when you talk to him. You can feel his love of the game, you can feel his appreciation for the CFL. I believe all of those things are really helpful. But it goes beyond that. You have to look at what he and Dany Garcia have done together.

They have a way of thinking about inclusion. I think about the things that we’re so proud of in the CFL and our very inclusive approach, including our global initiatives and all of those things are kind of part of their fundamental DNA. I think they think that it’s a great fit. Of course, again, we don’t know where it’s going to go. But you can feel their enthusiasm for the CFL every time you talk to them. 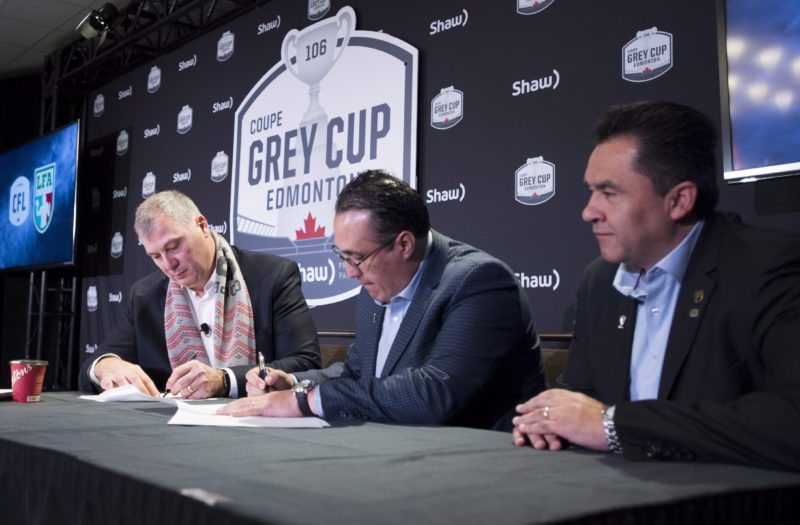 At the 2018 Grey Cup, Ambrosie set the CFL’s global initiative in motion, signing a letter of intent with the LFA of Mexico. Oscar Perez, chief executive officer of the LFA signs, as Alejandro Jaimes, Commissioner of the LFA looks on (THE CANADIAN PRESS/Jonathan Hayward)

CO: It seems like they’ve researched and are interested in the global reach of the game. How beneficial has it been for you through these talks to be able to say that you’ve met with just about every pro football league in the world and work closely with many of them?

RA: It was really exciting to share some of what we’ve learned and obviously indicating there’s lots of room for continued learning. I think they saw in that initiative a huge opportunity (to ask) how can we work together? How do we collaborate? How do we get to know the world together? How do we welcome the world into this great game of football?

Those are just some of the things that we started talking about that led us to today. And again, an acknowledgment that we’re not exactly sure where this is going to take us but we felt like the right thing to do was to tell the football public that we’re talking and make this process more transparent.

“This is about helping us fulfill our potential and working with great partners and exploring opportunities to work together. If we can harness that energy, then this is going to be a very positive experience for us.” — Randy Ambrosie

CO: I think people in general struggle with change sometimes. What would you say to CFL fans that might have mixed emotions in processing this announcement to put them at ease and to let them know where the league is at in its intentions?

RA: That’s been on my mind a lot, leading into today. I’ve spent a lot of the last four years talking with our fans. I especially love game day and being in our stadiums and stopping to talk to our fans and on my own road show circuit, which was so helpful for me.

Something that has come up almost at every occasion, I have a fan say to me, it’s somebody that loves the game. It’s a father or a grandfather or an uncle or an aunt who says, ‘I love this game as much as I love anything in the world of sports but you know, my nephew or my niece or my son or my daughter or my grandson or granddaughter doesn’t connect with it the same way that I do.’

I think that’s what this is about. This is about all of those fans, whether they be in Saskatchewan, Manitoba, Alberta, BC, Ontario or Quebec, or our friends in Atlantic Canada; in all four corners of the country that love our game. It’s the passion they have, it’s their dream for our game to be bigger. I’d say to them, this actually goes beyond just pro football. This is, how do we help amateur football? How do we energize amateur football? How do we help our friends at U SPORTS and grow the game there?

I’d say to them this is about helping us fulfill our potential and working with great partners and exploring opportunities to work together. I’m hoping that CFL fans will be excited and encouraged. You’re right, there will be some trepidation but I think if we can harness the energy which I believe is authentic, that everyone wants to see our league, everyone wants to see football in Canada grow and be stronger. I think if we can harness that energy, then this is going to be a very positive experience for us.