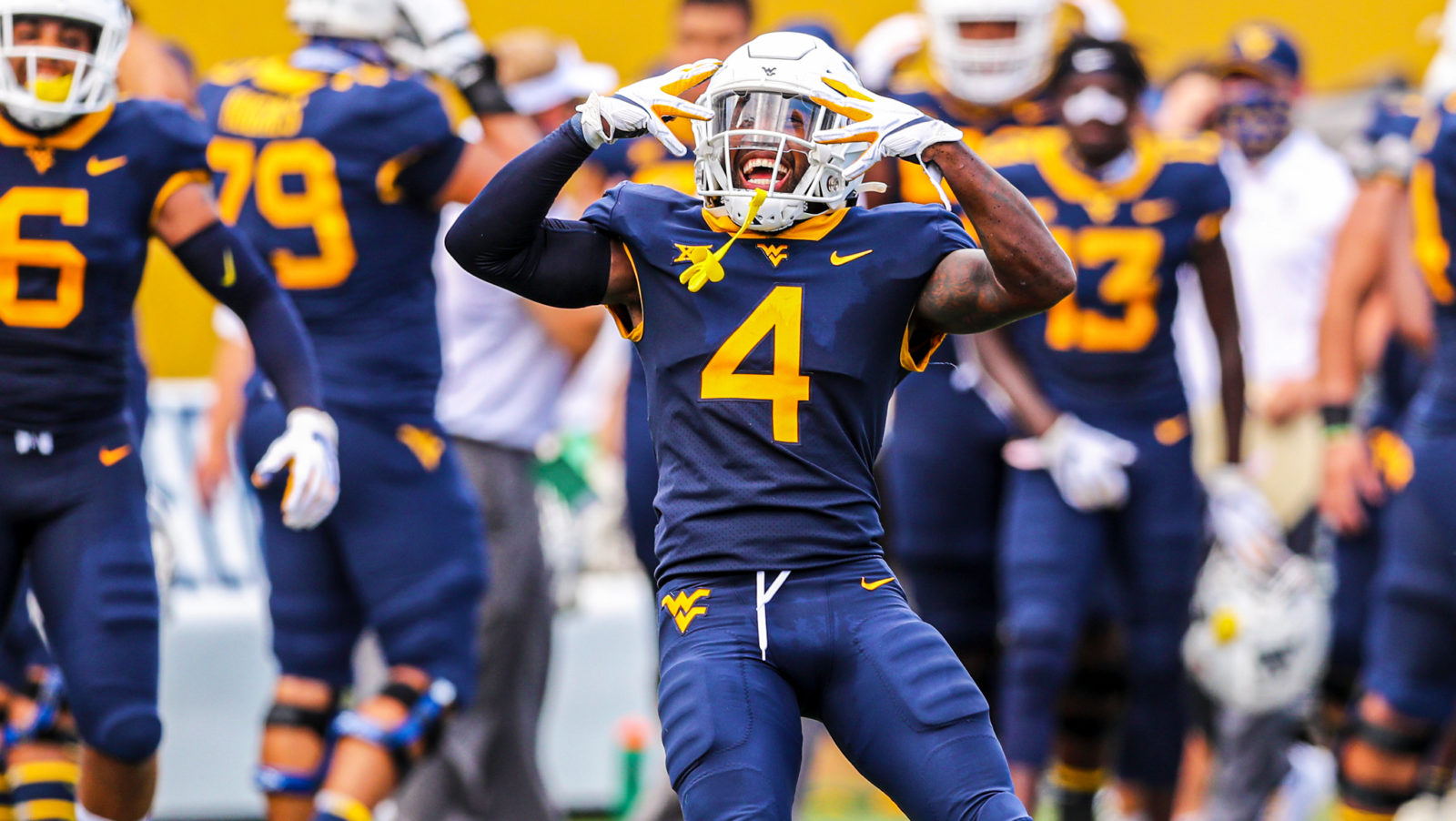 TORONTO — It’s been a bit of a different year to say the least for Alonzo Addae. The defensive back was able to make it into games with the West Virginia University in 2020 after transferring, but because of the COVID-19 pandemic, it was the first time that his family wasn’t able to attend his games in person.

While he was living out a dream to play in Division 1 of the NCAA, he was still missing home.

“It was a blessing this year to play on national TV because a lot of the games were streamed, but in terms of in-person, they weren’t able to make a single game,” Addae said on Tuesday. “It was devastating with me sitting out the previous year, and then in return, me going back home, we weren’t allotted a lot of time. If we do have breaks, it’s usually three or four days, and with the quarantine rules, I haven’t been able to go home in a little while, so I’m definitely missing my family.”

It took some time for the Pickering, Ont., native to make it to a power-five program, but his hard work and dedication have paid off, as he’s now on the cusp of making another dream — becoming a professional football player — a reality.

Addae spent his high school days playing both sides of the line, as a defensive back and wide receiver. Addae did go through the Canadian recruiting process during his junior and senior seasons, visiting with major OUA schools, including Western, McMaster, and Queen’s. He had offers from NCAA schools in his senior year, but they wanted to see more film on him playing against kids in the States.

He was chasing his dream of playing Sundays in the NFL, so he pursued a chance to play stateside. He played a postgraduate year at The Peddie School in Hightstown, New Jersey, where he had 12 touchdowns and four interceptions. Because he was a little later in the process, some schools already had their plans set, but the University of New Hampshire was the first school to offer him that year, and he opted to head to the school that showed the initial faith in him.

RELATED
» Ferguson: A look back at some all-time great combine performances
» O’Leary: Bruno Labelle is ready for his pro future
» Ferguson: The 2021 Draft comes with its challenges 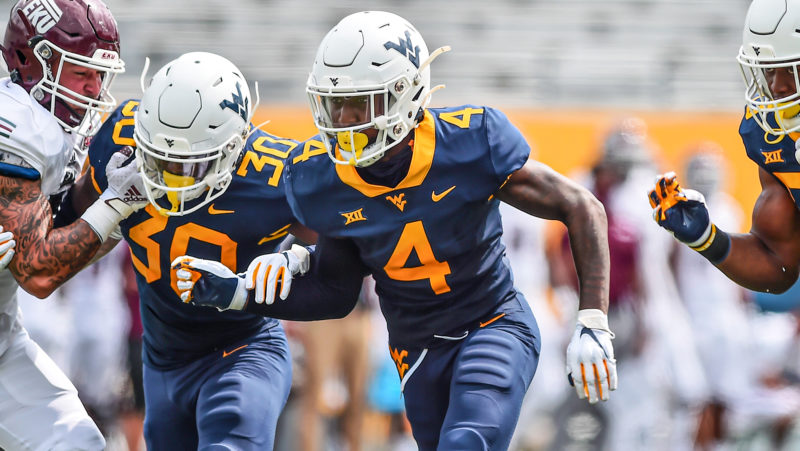 After a redshirt year as a freshman, Addae played 13 of 14 games for the Wildcats in 2017, making 36 tackles, six pass breakups, two forced fumbles and a fumble recovery. In 2018, he had 25 total tackles while with six pass breakups.

Following his redshirt sophomore campaign, Addae felt like he needed to make the jump to FBS football and test himself against the best players in the country.

“Being able to play in the Big 12 against teams like Texas and Oklahoma, and we were on national TV pretty much every Saturday. So it was pretty much a no-brainer for me once they reached out,” Addae said.

In order to fulfill his transfer requirements, Addae redshirted the 2019 season, but he was able to appear for the Mountaineers in 2020, making it into 10 contests.

His final year was a productive one, as Addae racked up 38 solo tackles, 28 assists, two interceptions, seven pass defences, and a forced fumble. For his efforts, Addae was named Second-Team All-Big 12.

“I feel like, as the season went on, things definitely slowed down for me,” Addae said. “I put in a lot of work in over the season I had to sit out. I was still involved with everything but it was just hard. That was the first time I was ever in a situation where I was on the team but not really travelling with the team, I’m on the sidelines but not in a jersey. When 2020 came and I was able to play, there were obviously questions if we were even going to be able to play. I was just ready to go.

“I definitely had a good season but I definitely think there’s something I could improve on. In my game, my physical structure — I work a lot in the off-season to get bigger, faster, stronger — just mentally, getting the grasp on the defence. So I was kind of learning as I went on during the season so I think there are a lot of things I can improve on.”

Addae will have a chance to hone his craft during the lead-up to the NFL and CFL drafts and the coming seasons. He’s been picking the brain of his cousin, Los Angeles Chargers safety Jahleel Addae, every day.

The two spent as much time together as possible growing up, and Alonzo says that Jahleel is more like his older brother rather than a cousin.

“He’s honestly been a role model in my life,” Alonzo said. “Getting into West Virginia and being on a bigger stage, a lot of things are happening for me and nobody in my immediate family has really gone through things like that. So for him to be there and to be able to pick up the phone and go, ‘The media is getting in contact with me. How do I deal with this?’ Or a training regimen or what he does when he plays. Also, just to be able to chop it up with someone who’s in a similar situation as me — He went through the D1 process and I think this will be his eighth year in the league.

“So just to have someone in a similar position as me, family who I trust with everything and I can open up and talk to, it’s a blessing.”

Alonzo will be headed down to train with Jahleel this spring leading to train.

If this year’s draft proves anything, it’s that there’s a Canadian renaissance taking place in the NCAA. We’ve seen it in basketball, and football seems to be the next sport that Canadians are beginning to make a splash in south of the border.

Addae played with Calgary Stampeders defensive back and knows his younger brother, Alabama receiver John, very well. They’re just two of the many Canucks that have been able to show kids the chances that could await them.

“That’s something that I carry on my shoulders every day. I’m one of the few to play NCAA ball out of my area and in the country, so I carry that on my sleeve,” Addae said. “Every day, I try to set the example for the youth to let them know that, if you put in the work, you could be in this position too.

“…When I was coming up, I was looking at the NCAA and seeing so few players from Canada making it, so it’s kind of hard on you. Of course, you’re chasing something that not many of us have gotten to. So now, just being in the position to be here, and then hopefully being blessed enough to play professionally as well, we want to show the youth that it’s possible.”

Defensive backs are always touted commodities in the Canadian Football League, and as the third-ranked player at his position, Addae will be an enticing player to keep an eye on at the beginning of the draft. Addae will, however, be returning to WVU for 2021.

Despite that, he has experience at both corner and safety and could be utilized well anywhere in the defensive backfield. Even though a team will have to wait a year for his services, it’ll be well worth the wait. He’ll have another year playing top-flight talent under his belt when he turns pro. The sky is the limit for him and he continues to learn and improve every year.