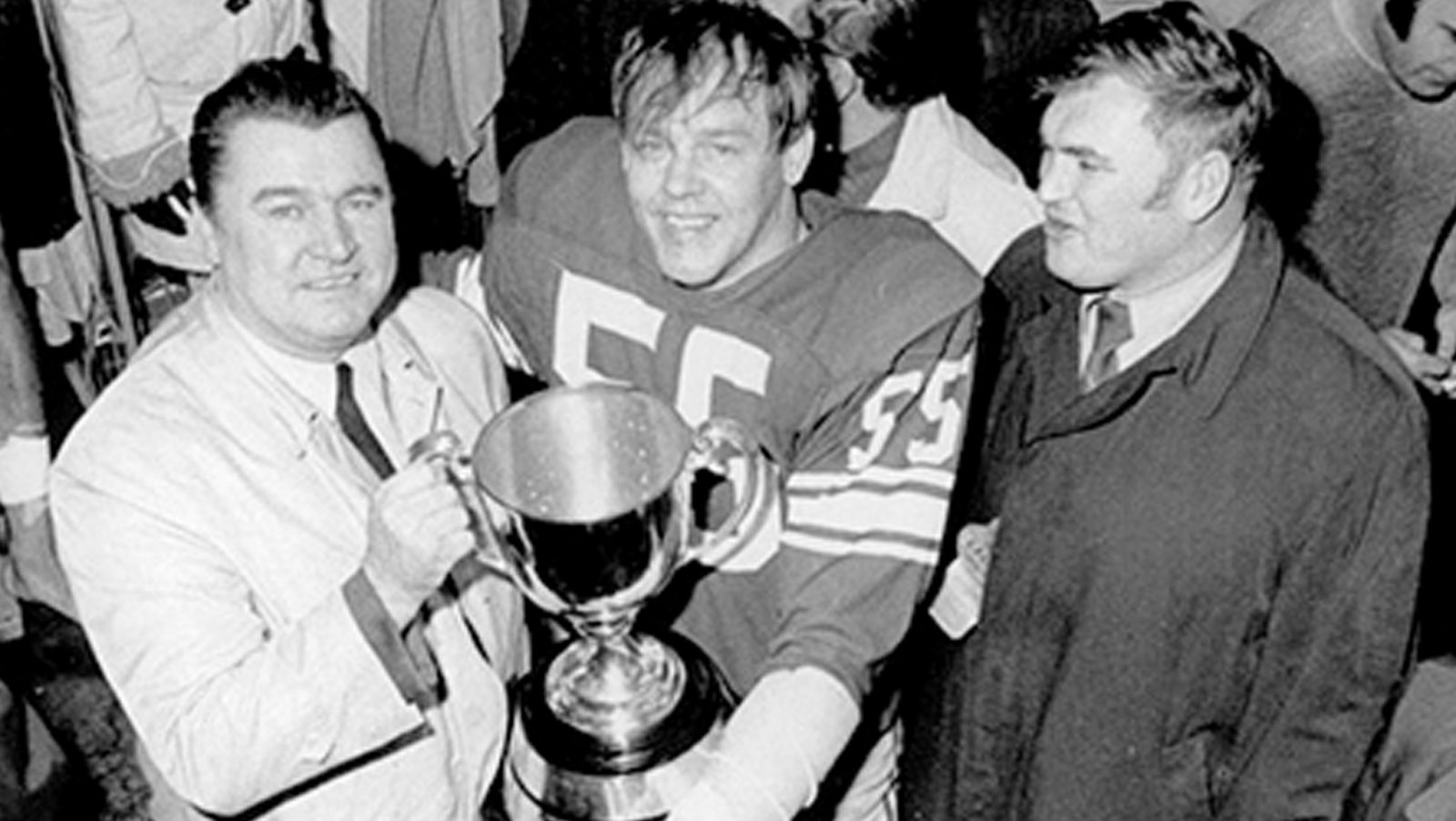 The Stampeders’ logo was affixed on the helmets of the players, who braved the elements of a chilly Nov. 10, 2019 day against the Winnipeg Blue Bombers, looking for a chance to play in the Western Final. When Reggie Begelton slipped around a pack of Bombers’ defenders late in the second half for a touchdown, the crowd at McMahon erupted and Quick Six, the white horse that hangs out near the Stamps’ bench, raced up and down the sideline.

Lehew did much more than put a logo on the team’s helmets and help get a horse on the field for game days, but they’re two things that helped shape the look of the franchise. Lehew died on Tuesday, at the age of 92.

He was an assistant coach with the team from 1960 to 1963 and served as the team’s general manager from 1965 to 1974. In his tenure as GM, the Stamps played in three Grey Cup games and won it — just the Stamps’ second at the time — in 1971. He was instrumental in the introduction of a horse to game days, the Stamps said in their announcement on Thursday. He also put the imagery of the white horse on the Stamps’ helmet. 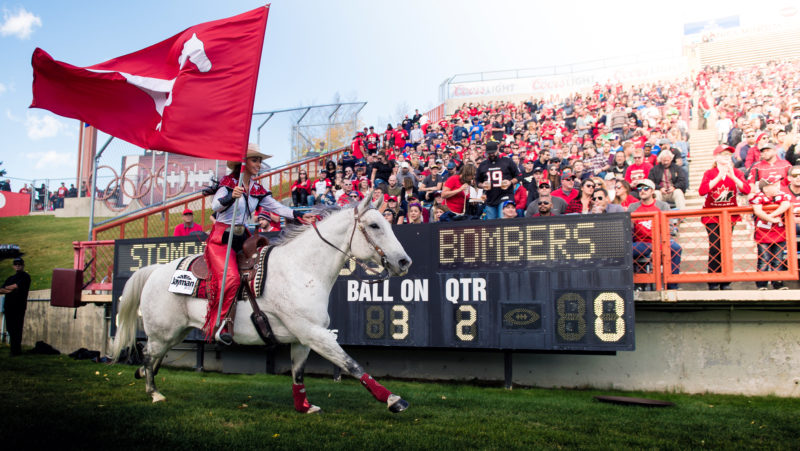 The idea for bringing a horse onto the field at Stamps games originated with former GM Rogers Lehew. He also added the Stamps’ logo to their helmets, shaping the team’s modern-day look (Johany Jutras/CFL.ca)

“He was responsible for coming up with that,” said Stan Schwartz, who retired in 2016 as the Stamps’ executive vice president and consultant to the executive committee.

“Rogers, along with the late Tony Anselmo (a former Stamps’ president) served as my mentors and most importantly my friends in the wild and wacky world of professional football. I couldn’t have asked for two better people.”

Schwartz first met Lehew at a Stampeders’ evaluation camp for high school players in 1963. Lehew was coaching and Schwartz was a player, wide-eyed at a world on and off of the field opening up to a teenager from Medicine Hat, Alta.

Schwartz would eventually become an assistant coach with the Stamps as well, from 1976 to 1983, then later served as team president (1996 to 2003) and stayed with the team in a variety of high-level roles until 2016. Through all of that time, he and Lehew stayed connected through their involvement with the Stamps’ alumni association. The two had their names go up on the Stamps’ wall of honour in 2004.

Through Schwartz’s 40-plus years in and around the Stamps’ organization, he saw just how much Lehew cared about football at all levels in Calgary. It was there when they met 58 years ago at that camp and stayed with him until the final years of his life, when he’d watch his grandsons play football at Shouldice Park.

He also had an excellent eye for talent. Stamps’ play-by-play voice Mark Stephen pointed out that Lehew brought in Wayne Harris, Herm Harrison, John Helton, Larry Robinson, Don Luzzi, Earl Lunsford, Harvey Wylie and Jerry Keeling during his run as GM. All went on to be named Canadian Football Hall of Famers.

In 1967 Lehew introduced the President’s Ring, which goes to a player that demonstrates excellence on and off the field. The saying goes that we stand on the shoulders of giants. In Calgary, Rogers Lehew is one of them.

“Rogers is one of the most important individuals in the history of the Calgary Stampeders and he will be sadly missed,” Stampeders president and GM John Hufnagel said in the team’s announcement.

“Anyone who knew Rogers quickly realized how much he loved Calgary and the Stampeders and his contributions to the city and the franchise will never be forgotten. On behalf of the entire Stampeders family, I offer my deepest condolences to his family.”

“I think his long-standing commitment and dedication to the sport of football, both at the amateur and professional levels certainly deserves everlasting recognition,” Schwartz said.

“He has been involved with football for so long and he continued to support the game until the end.”

Lehew’s legacy will live on around us, whether it’s in the Stamps’ logo on their helmets or when Quick Six is running on the sidelines (the team initially attempted to run a horse up the middle of the field, Schwartz said, but sending people out after it with shovels became problematic).

With the past year having thrown a wrench into all of our planning and socializing, Schwartz was last able to see his friend over a year ago at Lehew’s 91st birthday.

“We just had a small conversation and I congratulated him and thanked him for being a big part of my journey,” Schwartz said.

“Because without people like him and Tony Anselmo and certainly so many others along the way…it’s hard to travel, with amateur football and everything else a 60-plus year journey in sports.”