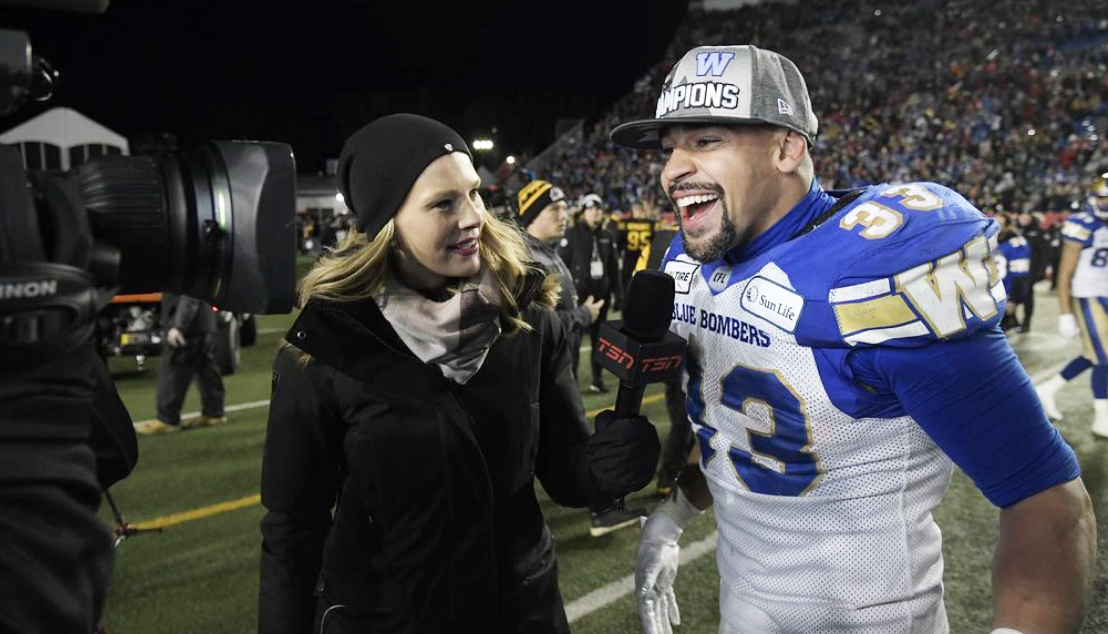 TORONTO — Sara Orlesky loved the game of football from a young age. She’d watch it on TV with her father and said that she would see the hosts and sideline reporters and strive to be in that position one day. She wanted to be down on the field, right in the middle of all the action.

While working on her degree in communications at Simon Fraser University, she worked as a weekend sports producer at CityTV in Vancouver. She then transitioned to a role with theScore as a Western reporter.

In 2007, Orlesky joined TSN as a Sportscentre reporter while becoming a sideline reporter for the CFL on TSN in 2008. She’d reached the point that she’d hoped to get to when she was young. However, the landscape for women in sports still had a long way to go at that time.

“When I started covering the CFL, I would have been 23, and I was generally the only female that was at any games. I would walk into a locker room, whether it was the home or the visitors and I used to be able to tell you exactly how many squares were on the ceilings in terms of tiles,” Orlesky said on the latest episode of The Waggle Presented by Sport Clips.

“I would just feel uncomfortable. Back then, it wasn’t as common to have women in there and so you were more likely to get a quote if you were a male.

“So I made sure that I was constantly dressed professionally, but my eyes were always at the ceiling while I was waiting. Because I wanted to make sure that there were no issues in terms of players making comments or anything like that. But as I’ve gotten older, I think that the atmospheres around the rooms have changed.”

Episode 253: Celebrating the Women of the CFL

EPISODE OVERVIEW: This week we speak to just a few of the great women doing incredible work around the CFL. Donnovan is joined by guest co-host Kate McKenna as they talk with Sara Orlesky (CFL on TSN), Arielle Zerr (Saskatchewan Roughriders), Gemma Karstens-Smith (The Canadian Press) and Kristina Costabile (CFL.ca).

EPISODE RUNDOWN: Donnovan intros Kate McKenna as co-host (1:00); Kate’s relationship with football and the CFL (2:00); introducing the panel of guests on this episode (4:00); areas to grow when it comes to diversity (5:00); Sara Orlesky interview start (6:10); Sara and Kate’s memories of Chris Schultz (8:00); Sara’s relationship to football growing up (12:25); Donnovan & Sara remember covering the Vanier Cup (in the frigid cold) (15:20); Sara’s perception on sideline reporting as a woman (19:30); Sara’s authenticity on camera and being a role model to young girls (21:50); balancing being a mother and a demanding career (25:30); Sara Orlesky interview wrap-up (37:00);  Kristina/Gemma/Arielle interview start (38:45); Arielle’s introduction to football growing up in Saskatchewan (39:10); Gemma’s early CFL memories growing up in Edmonton (41:50); Kristina’s connection to football growing up near Hamilton (44:30); times wishing there were more women working in the industry (46:30); women bringing a different perspective to the sport (47:30); being able to take pride in your work (50:15); Gemma on changing work perspective since becoming a mom (51:30); allyship and making professional sports a better place for women to work (53:20); advice for young women wanting to get into sports journalism (58:00); panel wrap-up (1:00:00); final thoughts from Donnovan & Kate (1:01:45).

Orlesky mentioned that she’s received a lot of support from her co-workers at TSN over the years but when she first started, there was an adjustment to having a mother work in a role.

“My daughter is 11 now, but when I had her at the end of August in 2009, I was back on the road by October for CFL,” Orlesky said. “I was so worried about giving up an opportunity. If I missed the rest of the CFL season, how that would impact me going forward? Would I be taken off Grey Cups? Or would I not get the football assignments I was looking for? Because I always did playoffs and then Grey Cup. I didn’t get pressured by a single person at TSN to do it but I felt internally that pressure of how it might affect my career.

“I just feel as if now, I’d feel more comfortable, kind of enjoying that maternity leave and that time and knowing you can have it without necessarily having your career impacted.”

Bennett mentioned that when he had recently spoken with Sheri Forde, she mentioned that she was the first woman on air that was pregnant — something that he thought couldn’t have been right but was true.

Orlesky has become one of the faces of the CFL on TSN and someone that young women today can look up to and emulate if they’re aspiring to have a career in sports.

“I think that’s especially important to me,” she said. “I think that sometimes, especially with the way that things are in this day and age or the way that the entertainment culture has sort of taken over, for me to be able to present myself as a role model for kids, that’s something I take very seriously.”

Saskatchewan Roughriders director of communications Arielle Zerr, The Canadian Press’ Gemma Karstens-Smith, and CFL.ca deputy editor Kristina Costabile all grew up watching the CFL in their respective towns and have become some of the most important voices in the league.

“People are going to assume things because you’re a woman and that doesn’t have to be a bad thing,” Karstens-Smith said. “First, you can use it as an opportunity to prove people wrong, which is so fun. You can also add everything from a different perspective. Whether that’s you seeing stories that other people don’t or just your life experience is different, you can use that to your advantage to tell unique stories and approach people in a different way.

“You are different and that’s so cool and special and you should use that to your full advantage.”

Karstens-Smith also touched on being nine months pregnant during the tail end of the 2019 CFL season. During that time, she wished that she had another woman around that knew what she was going through. Now that she has given birth to her daughter, Lola, she sees the future in a different way and wants to help create a safe space for her within sports.

“I want her to be able to play whatever game she wants without thinking about her gender or anyone’s skin colour or anything that has traditionally been a barrier for anyone in the past,” she said.

Zerr added that it starts with men being willing to bring women on board and seeing them as capable rather than the old-school stereotypes that still, unfortunately, exist in some situations.

She grew up in a Canadian football hotbed in Saskatchewan and after going to some Riders games with friends, started learning and became inquisitive about the CFL — something that she credits as an early indication that she’d become a journalist one day.

Zerr covered the Roughriders for CBC Saskatchewan as well as 980 CJME before transitioning into her current role with the Riders. She has been ale to see the allyship from the players and staff since joining the team.

“I went in with all sorts of nerves…and it was the most normal thing in the world,”  Zerr said. “I don’t feel like I’m different in any sense. I don’t feel like I’d be relied on anymore or less than if I was a man. I feel like the players trust me, the coaches trust me. I had one particular player when I first started with the team who said, ‘If anyone gives you trouble, you tell me and I’ll take care of it.’ So you might go in with a few fears that maybe I won’t be accepted. But this league has been a blessing for me from the very first day.” 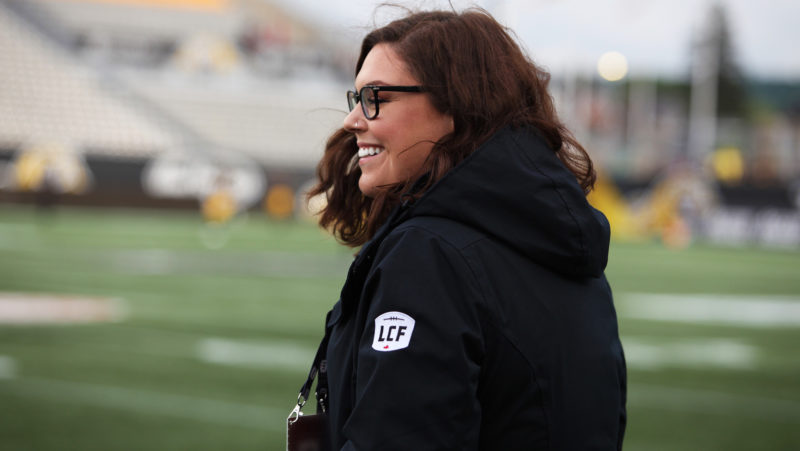 Costabile shared the same sentiment. She joined the CFL as an intern straight out of school and has now become one of the faces of the league’s content team with her amazing ideas and creative storytelling.

“I wish there was a time when women could just say, ‘I’m qualified for this job and it doesn’t matter either way,'” Costabile said. “I think the good thing is that the CFL has been a really, really inclusive place. I can’t even think of an instance where I felt out of place like I didn’t belong. There are times, of course, when I’m in the locker room and I realize that I’m the only woman. But in terms of me actually executing and doing my job at the league office, I don’t feel that way.

“So I would just tell people to go for it. I’m super lucky that everyone that I work with has never made me feel like an outsider or excluded. Even on Twitter with fans or at a stadium, I don’t think I’ve ever really felt like an outsider.”

While the league and sports media landscape has come a long way, there’s is still a lot of work to be done when it comes to inclusion. It takes all of us to create change and sports need to become a safe space for everyone.