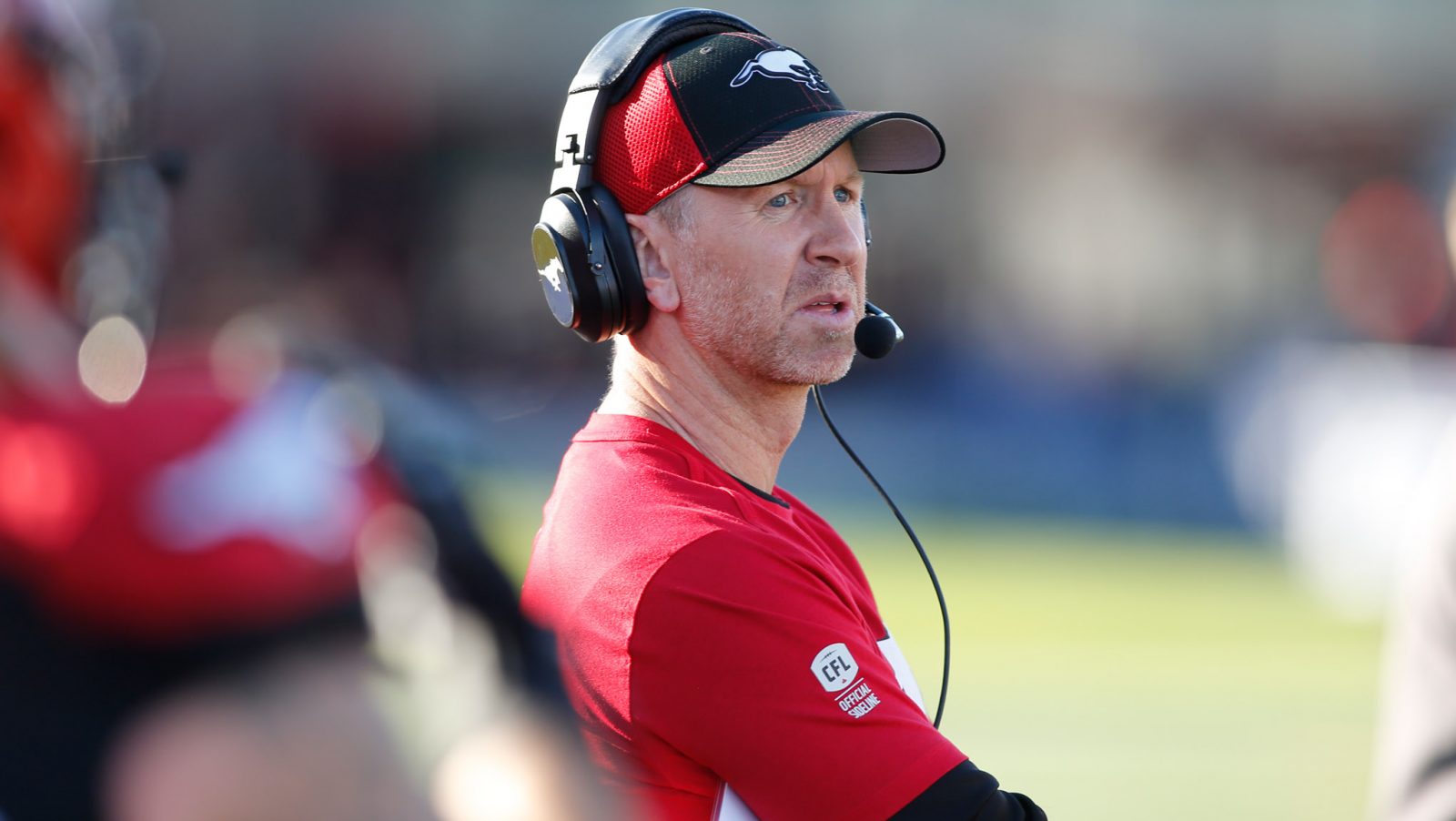 TORONTO — When looking at how the combine process has progressed over the years, Dave Dickenson is happy to be on the other side of the grading process.

“Thank god it wasn’t what it is today. I don’t think I ever would have gotten into camp even,” Dickenson said. “I wouldn’t have been able to check any of the boxes for the guys. Shorter guy, slower guy, not very quick, not very strong.”

Now that he’s on the other side of the scouting process, the Calgary Stampeders’ head coach has been able to help general manager John Hufnagel build one of the most consistent squads in the league over the last decade — he was on Hufnagel’s staff since 2009 before taking over as HC in 2016.

The scouting process is never an exact science. No matter how good a player may be, there’s no guarantee that they will have a Hall-of-Fame career. Dickenson admits that, for all the picks the Stamps have hit on in the past, they’ve also missed on some players.

Dickinson added that when he’s interviewing prospects, he wants to learn what they’re about and how football fits into their life, and that he has certain questions he’d like answered to get a read on an individual. He also said that he likes being able to meet people in person and look them in the eyes, so with interviews being conducted virtually, it adds another wrinkle to this process.

EPISODE OVERVIEW: In the wake of violence toward Asian communities, former Grey Cup champion offensive lineman Bryan Chiu shares his experiences and challenges, as well as those of his family. Later, Stampeders head coach Dave Dickenson talks to Donnovan about the unique scouting challenges posed in 2021 without a traditional Combine, as well as how he has coped without a team to coach for over a year.

EPISODE RUNDOWN: Episode introduction; Bryan Chiu intro (2:50); how recent events have impacted the Chiu family (3:50); has the pandemic increased racist acts? (6:00); Bryan playing youth football as an Asian child (6:45); Asian hate crimes on the rise in Vancouver and racism in Canada (8:30); how events are discussed and portrayed in media (14:30); how do we improve and how do others become allies? (16:15); Bryan being a trailblazer as a professional Chinese-Canadian football player (17:45); Donnovan’s final thoughts and Dave Dickenson intro (20:55); grading players now vs. when Dave was a player (23:00); the challenge of scouting highlight tapes (27:20); interviewing players virtually vs. in-person (30:30); dealing with the “backlog” of Canadian talent with 2020 picks not playing last year (32:30); the typical Stampeders “type” player, ie. Alex Singleton, Fraser Sopik (35:20); Stampeders’ inactivity during Free Agency (38:45); John Hufnagel & Dave’s involvement in scouting (43:00); Calgary’s backfield and the Trey Williams signing (45:25); how Dave has coped through the pandemic and the past year (47:45); thoughts on the CFL/XFL discussions (52:00); Dave Dickenson interview wrap-up (54:30); Donnovan’s final thoughts (55:00).

The Stampeders have been able to find some solid contributors in the first round in past years. Alex Singleton was ranked as the Stamps’ top player on the board in 2016, and he fell to them at sixth overall, Ryan Sceviour has started to carve out a role in the lineup after being taken in 2018, and Hergy Mayala started as a rookie and thrived in 2019.

Each of those individuals was selected at the back half of the first round. However, a draft isn’t made by who you take in the first round. A team is judged by the diamonds they can find later on.

Sopik was a player that the Stamps had an eye on for a few years after he caught the eye of Dickenson, who was watching tape on another Western player.

“I went into Brent Monson’s office and asked, ‘Who’s this other guy over here making all the plays?’ Sop was only in his second year, but he was already making plays and it was pretty easy to see that he was a football player,” Dickenson said. “Then sometimes, the Olympics get in the way, because he’s undersized and probably isn’t going to run fast enough to play DB, but is he big enough to play linebacker? We were really fortunate to get him.”

Sopik was able to contribute on special teams and the defensive end in his opening campaign while Mayala became the top National option for the Stamps by the end of 2019 following Juwan Brescacin’s season-ending injury. They’re the types of players that Dickenson and Hufnagel are always looking to add through the draft.

“We understand that we are a team with good depth, and I want guys to come in and work and fit in. But I do want (younger players) to push our vets and try to take their jobs, and do it in the right way,” Dickenson said. “The amount of rookies who come in and start on our team is pretty low but that’s because we’ve had pretty good depth. Hergy was someone who found his way in and really made an impact.”

The 2021 off-season was a quiet one for Calgary but that’s usually the norm for them, as they tend to pick up some players following the initial dash at the opening of free agency. Last year was an outlier, as they scooped up local product Sean McEwen and defensive back Richard Leonard, two splashes to start the free-agent window.

The team will look different in 2021, with a number of veterans being moved out during the off-season. But never count out the Stampeders.

“I didn’t learn it from Wally (Buono), but I saw what he wanted to do. He was of the opinion that if he cut a guy and missed out on a year or two, that’s better than completely waiting ‘til that guy doesn’t have any gas in the tank,” Dickenson said. “It’s important for us as an organization to always have options behind our veteran talent so that if we decide to go that route, we’ve got a guy sitting there and waiting.

“…It just seems like every year, you’re fighting on these one-year contracts and it’s a lot tougher to organize a team because you can’t really get your building blocks in place. I certainly don’t envy Huf’s job; signing our players and making this team fit. He’s obviously done an outstanding job alongside Brendan Mahoney and Cole Hufnagel. We have a small scouting department and a small management department — probably as small as anyone in the league — but we think we’ve done as good of a job as anyone as well.”