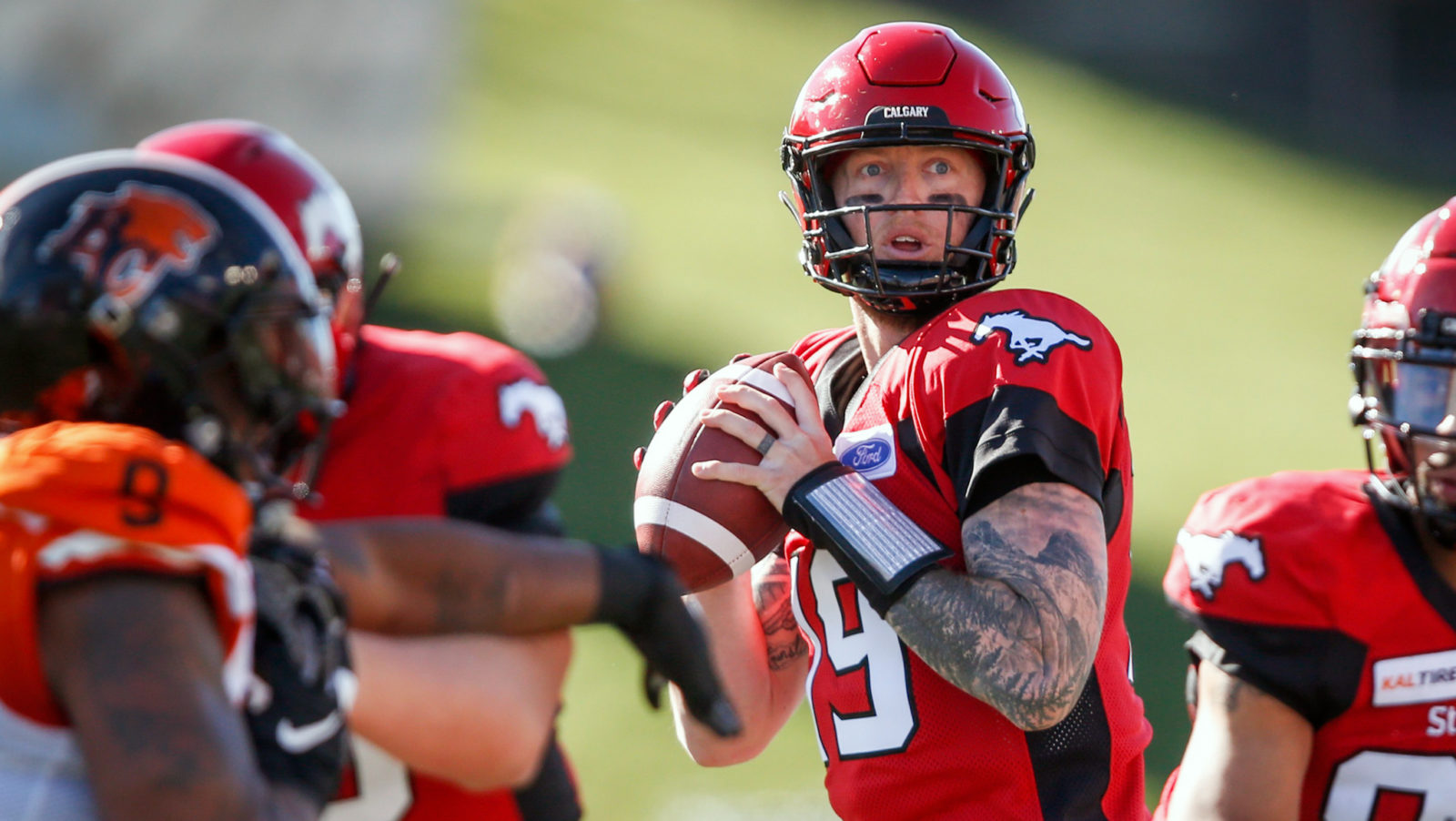 CALGARY — Calgary Stampeders quarterback Bo Levi Mitchell is coming off a 2019 campaign that saw him sidelined for a number of weeks due to injury. He was still able to return for the back stretch of the team’s season, but Calgary was bounced in the Western Semi-Final by the eventual Grey Cup champion Winnipeg Blue Bombers.

After a year away from the field, he’s had the opportunity to get back to 100 percent.

“I’m throwing 60 to 100 balls every time with the guys and there’s so much good and a little bit of bad,” Mitchell told Stampeders.com. “It’s more of a learning experience than it is a worry or a pain where you’re like, ‘Oh man, is this going to last?’ After getting the surgery, I know that my shoulder is structurally sound and now it’s just building that capacity and building that strength throughout my entire body.”

Now that he’s gotten back to a regular routine ahead of the 2021 season, Mitchell has his eyes firmly set on leading the Stamps back to the Grey Cup.

RELATED
» Stamps’ Dickenson continuing to adapt to unusual draft process
» Mock 1.0: What will Hamilton do with the first overall pick?
» Cut from the same cloth: Nick Holley excited for next chapter with Stamps

Mitchell suffered a pectoral injury during the 2019 season. In January 2020, Mitchell had shoulder surgery and was rehabbing that ahead of a full-time return to action in 2020. But then, the COVID-19 pandemic hit.

Football players are used to a very busy, regimented process during the course of a season, so when the 2020 season was cancelled, many players were left finding ways to fill their spare time. But for Mitchell, the added time away from the field also allowed him the opportunity to spend added time with his wife, Madison, and two daughters, Ele, and Lakelyn.

“The silver lining was definitely being able to spend more time with my daughters,” Mitchell said. “I just see the difference in Lakelyn and Ele. With Ele, I was gone all the time and she’s very clingy to mom. They have that very close relationship. And Lakey, when it’s bedtime, she’s asking for dad. She wants me to hold her and get her to go to sleep. So it feels good. You realize the connection that a mother has with the kids because she’s at home and feeling that connection and you realize how much effort that takes.

“…Whether you’re a stay-at-home mom or dad, it makes you appreciate your spouse a lot more, and what they go through in order to keep your kids happy and raise them as good humans, which today is the most important thing. So it’s been a blessing being able to spend that much time with my girls.”

Mitchell has had a chance to work alongside a number of members of the receiving corps and the offence and a whole. While workouts at McMahon can only be done individually alongside head athletic therapist Josh Termeer, outside of the stadium, the offence has been able to get some reps in together — with masks on, of course.

“The guys look good and they’ve been training their tails off this off-season. All the receivers that have stayed up here. Andres (Salgado), KJ (Kamar Jorden), Colton (Hunchak), Hergy (Mayala), and Kluk (Michael Klukas), they’ve just been working,” Mitchell said. “Richie (Sindani) came out this past weekend. I got to take snaps from Sean McEwen for the first time — hello. That was a great signing and I was excited about that. Finally got to take some snaps from him and hang out a bit.

“KJ is back and he’s feeling strong and Hergy is looking awesome. You’re not going to be looking at that guy as a Canadian receiver. He’s going to be out there, putting out some big, big numbers with some of the top guys in the league.

The Stampeders have seen some losses to their core from 2019. Nate Holley turned a standout rookie campaign into a contract with the Miami Dolphins. Tre Roberson is now with the Chicago Bears and Reggie Begelton signed with Green Bay. In 2021, Eric Rogers, Cordarro Law, and Robertson Daniel were shipped to Toronto and have all signed with the Argonauts.

Shane Bergman, who had protected Mitchell for nearly a decade, also announced his retirement this off-season.

“I think it was hard to lose some of our vets. I look around the locker room now and see all the names and there are a lot of new names. We’re going to be a very young team,” Mitchell said. “We lost Shane, a guy that’s been a brick wall in front of me for years and a guy that has dept me safe for years. When I found out that he was retiring, my heart broke a little because because I know that a lot of my success has come standing behind that guy.

The 31-year-old has become accustomed to playing late into November during his CFL career to date. Since Mitchell joined the organization in 2012, the Stampeders had made it to at least the Western Final every year before the 2019 season.

While the faces may be slightly different on the roster heading into the 2021 season, the face of the franchise remains, and now that he’s back to full health, Mitchell should return to his regular role of torching oppoising defences. You can never count the Stamps out when it comes to the Championship picture, especially when the 2019 Most Outstanding Player and Grey Cup MVP is good to go.

“The success has come from being around great teammates and great coaches for this entire time,” Mitchell said. “If (John Hufnagel) doesn’t make the selfless decision to step down as head coach and become GM to keep Dave (Dickenson) here, We don’t have the same success. If we had a different head coach, we would not be the same. I’m just a product of my environment. I’ve been around a lot of great people, a lot of great players, and there’s been a lot of good years and some tough years.

“But all in all, we’ve been playing football and having some fun doing it and I’m going to contine to do it for as long as I can.”