TORONTO — Les Maruo spent nearly the first decade of his life in Shizuoka, Japan, but at age nine, he faced a complete culture shock when he and his family moved West to Wichita, Kansas.

“When I first moved to Wichita, I didn’t know English and I couldn’t speak English, so it was hard for me to go to school and meet friends. It was very difficult,” Maruo said. “After a while, I got the hang of it and learned it really fast.”

Maruo was introduced to the game of football in the seventh grade. His mother thought the sport was too dangerous, and she wouldn’t let him sign up in elementary school. However, when he got to middle school, he signed himself up and told her when it was time to do physicals — he said that she thankfully gave him the OK.

From there, he began to find his passion for the game. In his first two years of high school, Maruo said that he wasn’t too big, but he started lifting weights and bulked up before graduating. 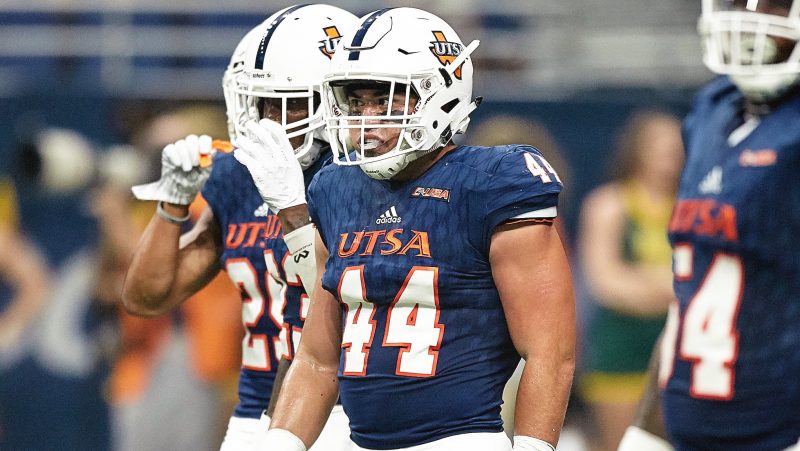 Japan’s Les Maruo was able to go from Japan to the NCAA ranks, playing for the University of Texas at San Antonio. (UTSA Athletics)

He went the junior college route and landed with Hutchinson Community College, where he’d share the field with running back Alvin Kamara as a freshman.

Before Kamara became a standout at the University of Tennessee — and later the New Orleans Saints — he was at Hutchinson as a transfer in order to bounce back and play for another Division I program.

“When I became a sophomore at Hutch, I was watching (Kamara), and the guys I played with my freshman year, on TV. I was really shocked, like, ‘Wow, I could be on TV just like them,’” Maruo said. “When I first got to junior college, I wasn’t really looking for a D1 scholarship. I was just looking for the one scholarship somewhere to continue my education.

“After watching those guys play, I was kind of like, ‘Man, I’m just as good as them. Why not me?’”

Following his second year at Hutchinson, Maruo transitioned to Division I football at The University of Texas at San Antonio.

He did redshirt his first year with the program in 2016, but he finished out his collegiate career with the Roadrunners. In 23 career games, he put up 98 tackles, six tackles for loss, 3.5 sacks, one interception, two passes defended and a pair of fumble recoveries.

Maruo was a MIKE lineacker during his time in junior college, but with UTSA, he spent time as both a SAM and WILL linebacker as well.

Following his collegiate career, Maruo says that he looked into the CFL and NFL, but when that didn’t work out, he came across the X-League’s account while scrolling Instagram one day.

The first photo featured kick returner Robert Johnson, who Maruo messaged to get a gauge on the league. Eventually, the two became teammates, as the linebacker signed with the Asahi Soft Drink Challengers.

In 2020, he participated in the CFL Global Combine in Tokyo and finished first in the bench press with 24 reps. However, his team didn’t allow him to enter the Global Draft as he was still under contract.

Heading into 2021, his contract is up and he has the chance to become a pro over in North America. He’s never been to Canada before, but growing up in Kansas, he’s used to snow and colder weather.

Maruo’s versatility and FBS experience will certainly help the cause, but it’ll be on him to stick with a CFL franchise.

“I’ve always dreamed about going (to the NFL or CFL) but after my pro day, I didn’t get drafted and I was kind of devastated,” Maruo said. “I didn’t know what to do, and I believe God put me in Japan for a reason. I played two years there without even knowing I’m going to have a chance to play in the CFL.

“It all just worked out at the right time and I feel blessed. It would mean the world to me. I’m not doing it for myself. I’m doing it for my family, the country of Japan and the players of Japan in the X League.”