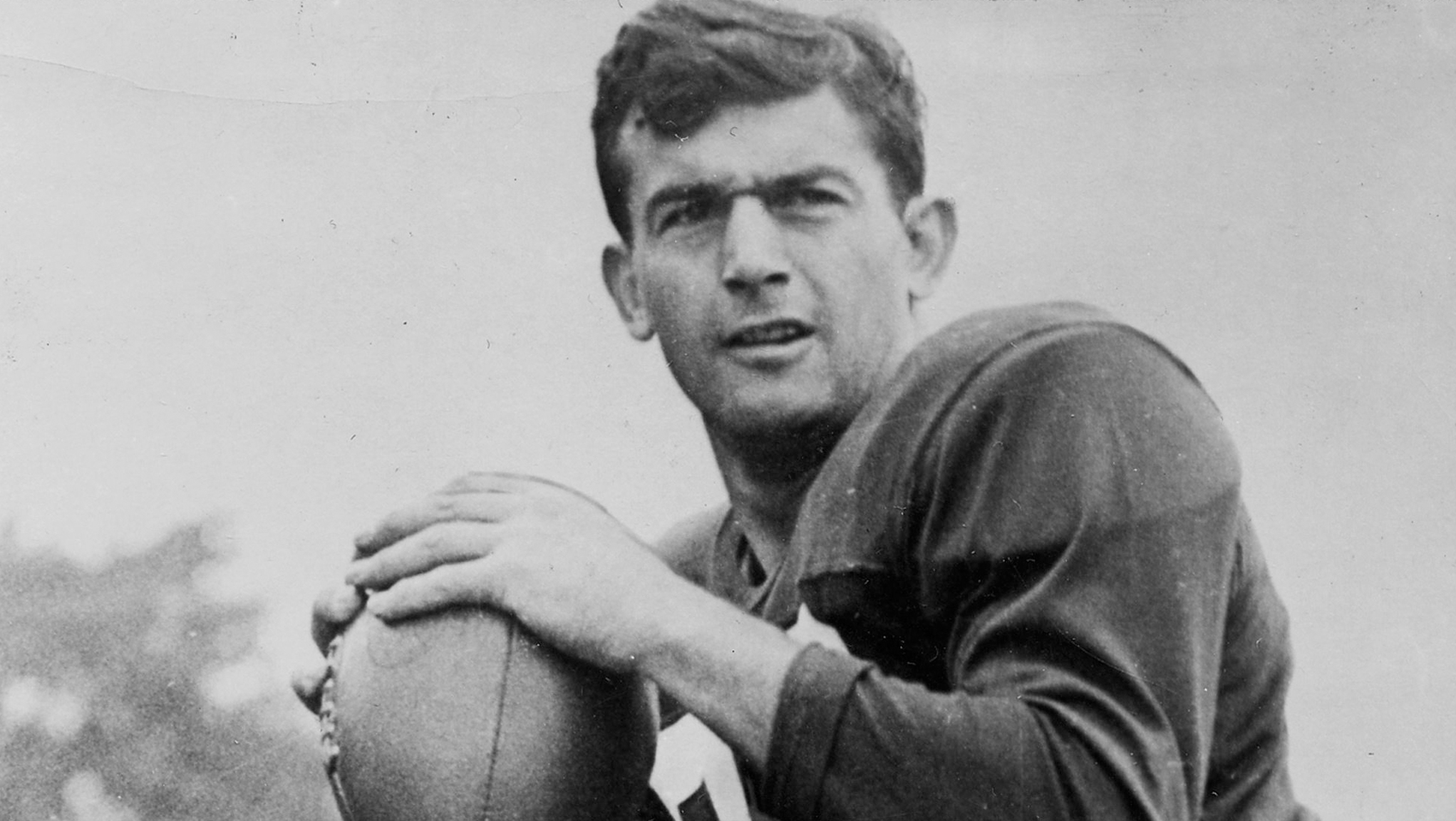 It doesn’t take a hardcore CFL fan to know that over the last 70 years or so the game of football has undergone an incredible transformation. Several evolutions in style, tendency and core beliefs have taken the game from its rugby origins to the wide open game of the ’70’s and ’80’s to the unparalleled efficiency of today.

Throughout the rich history of the Grey Cup, many passers have set statistical records only to have their mark surpassed.

In 2002 Anthony Calvillo’s Montreal Alouettes cashed in on a 90-yard touchdown reception, the longest in Grey Cup history. That is until Ricky Ray’s iconic strike to DeVier Posey set the new benchmark of 100-yards in the Double Blue’s 2017 victory.

Records are made to be broken, right? Well, not always.

Peel through Grey Cup passing history and one record will jump off the screen at you.

HOW?! A game played on muddy grass, where asking teams to throw the ball more than 50 per cent of the time was often like pulling wisdom teeth without numbing medication still holds up as the all-time record for yards gained through the air?

It’s true. In an attempt to understand how this happened and why names like Flutie, McManus, Burris etc. have never passed the mark I began reviewing and hopefully for you reviving the history of ‘The Rifle’s iconic performance.

RELATED
» Visit the Grey Cup on Demand Portal powered by Mark’s
» Grey Cup games from the 2000s added to Grey Cup Portal
» Cauz: Diving into highlights from the 2005 Grey Cup 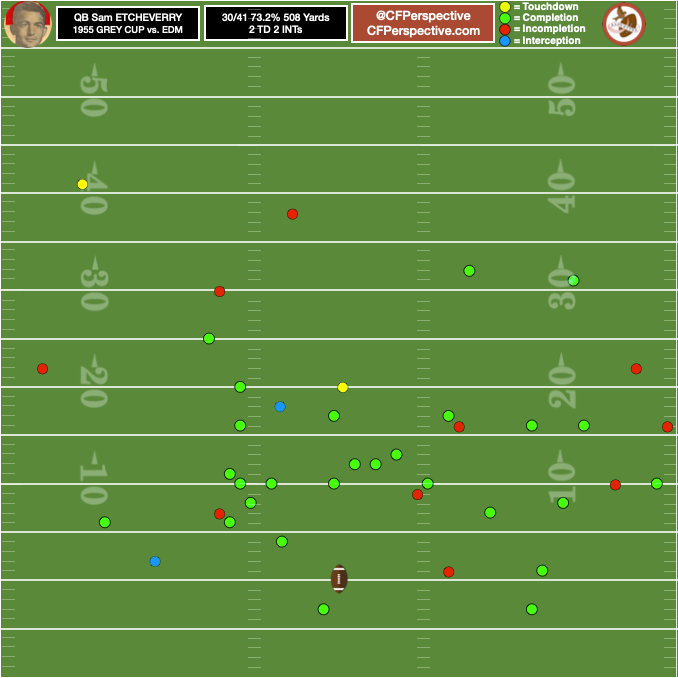 A trend commonly seen today still holds true in 1955. Right-handed quarterbacks like to throw what they see and more often than not what they see is in front of themselves on the right side of the field. Compare his target chart above to the heat maps of 1950’s Grey Cup throws below and you’ll begin to understand just how revolutionary Etcheverry’s attack was. 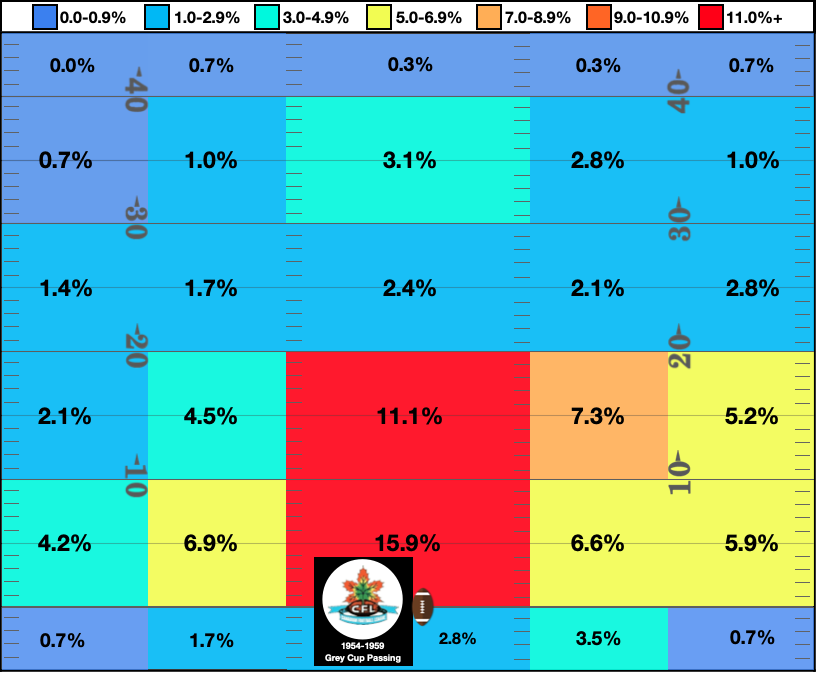 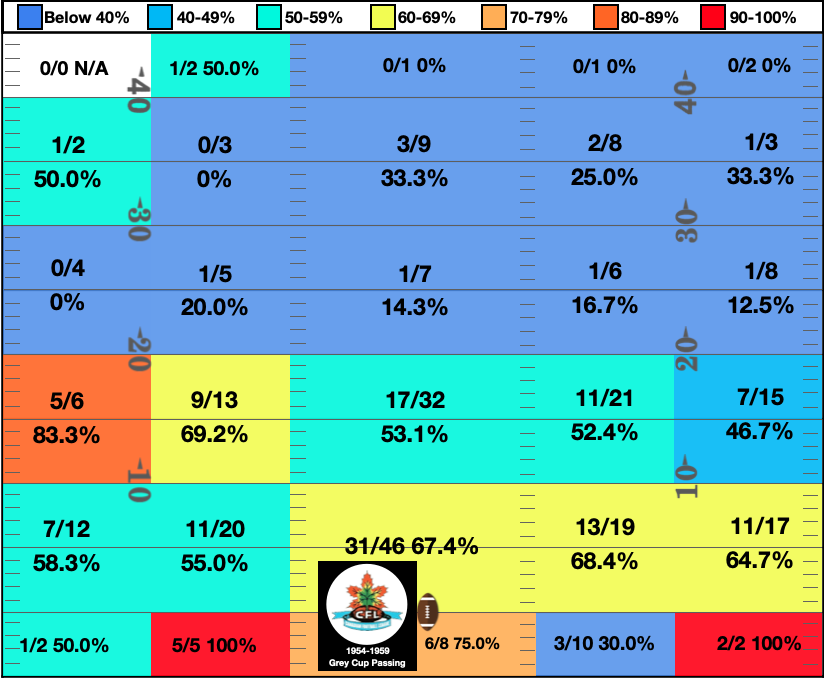 Sam didn’t push the ball down the field to modern standards, but he was one of the first CFL passers to consistently challenge defences deep while still completing at a high rate over 34 deep attempts to Jackie Parker’s measly eight. 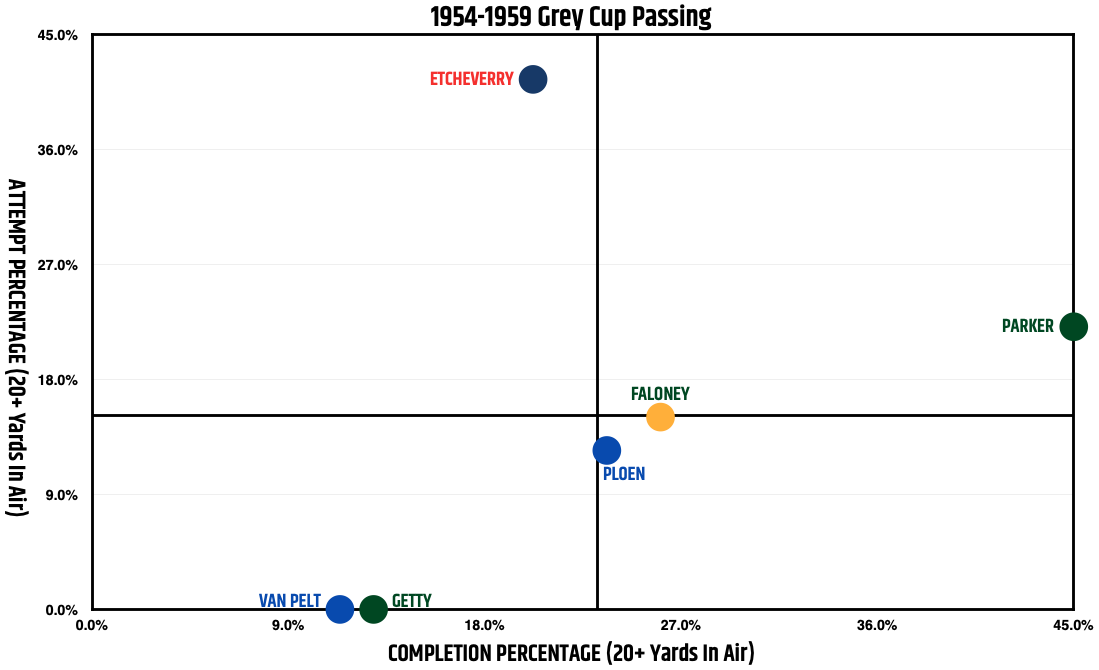 When it comes to 1950’s Grey Cup passing accuracy vs. depth of target, Etcheverry was bested by only Bombers’ QB Ken Ploen, who had a grand total of 35 throws to Etcheverry’s 112. Even with that inequality in attempts, Sam still nearly led all passers while Jackie Parker, Don Getty and early days Bernie Faloney all had roughly the same accuracy with varying depth of target approaches. 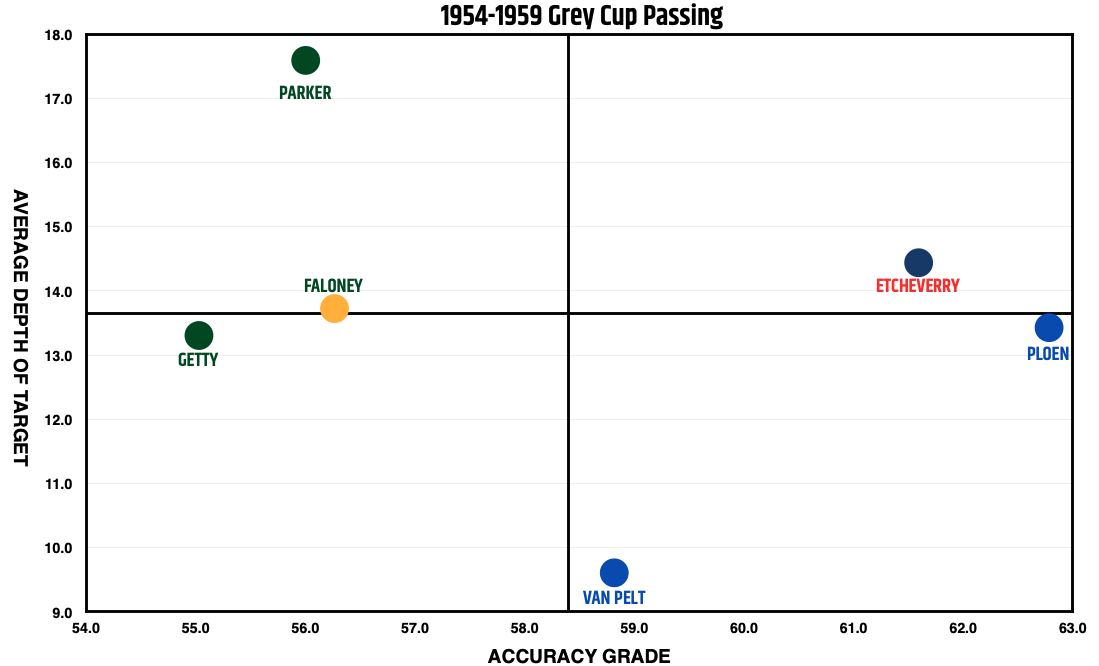 So just how good — and more importantly rare — was that 1955 record setting performance of 508 yards by Sam Etcheverry’s Alouettes? It stands alone as unquestionably the best aerial attack performance of the decade, with only the 1954 Alouettes and 1958 Ticats worthy of joining the podium. 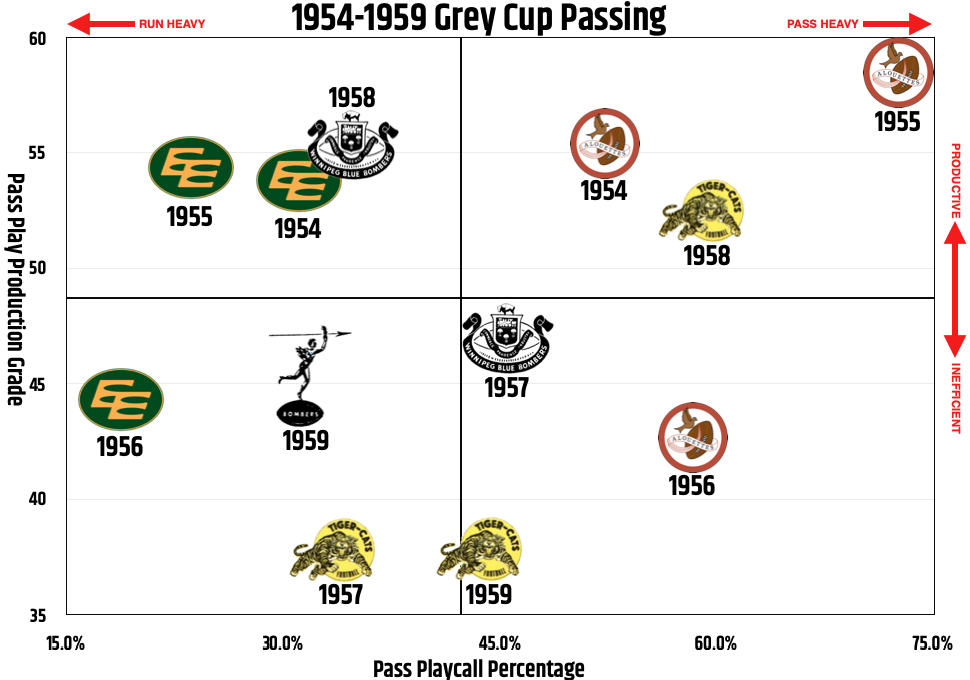 In 1955, Edmonton called a pass play on just 23.7 per cent of snaps. Etcheverry’s Alouettes? 73.4 per cent pass play calling. The two sides could not have been playing a more different game despite competing for the same championship. Unfortunately for Etcheverry, Edmonton’s run-heavy game plan would defeat his aerial assault in three-straight Grey Cup games, including 1956 when Montreal went from productive to entirely inefficient through the air.

While Etcheverry holds the record for Grey Cup passing, no quarterback sets a record like that alone. That led me down the path of finding out who helped him get there the most and where those 1955 Alouettes’ offensive skill performances stack up against others of the decade. 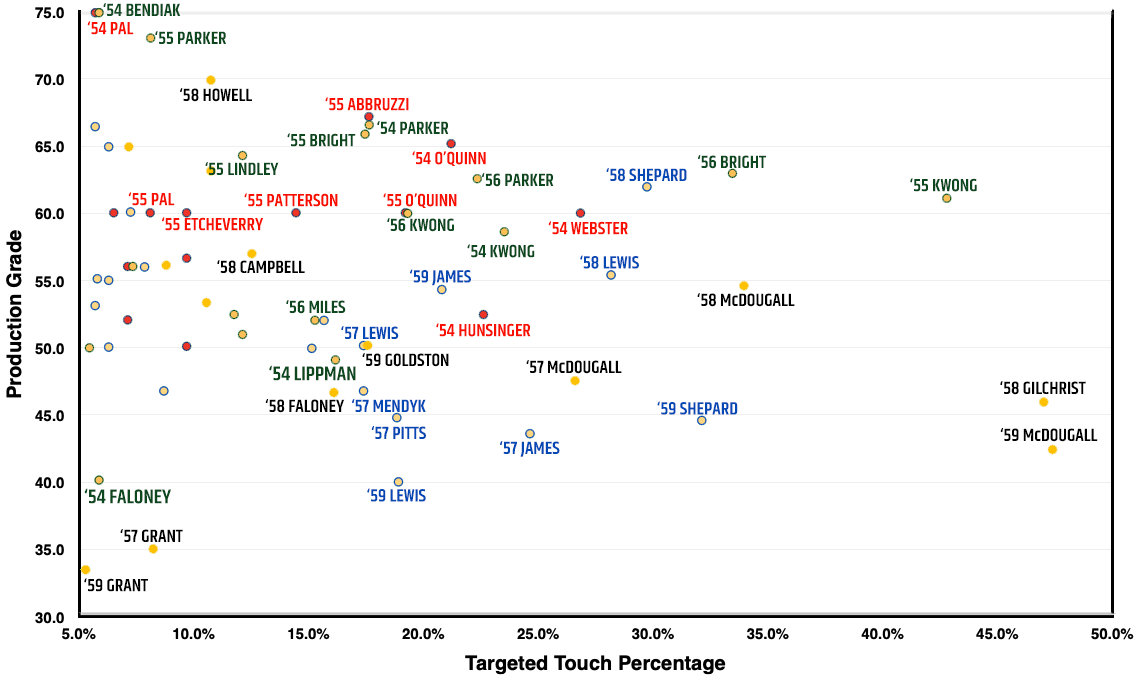 The reality? It was Montreal’s balance, not individual dominance that created the unbreakable mark of 508 yards. With varying degrees of targeted touches, Red O’Quinn, Hal Patterson, Joey Pal and Etcheverry calling his own number to run on passing plays created a well-rounded attack that Edmonton’s defence gave up large chunks to, but only allowed 19 points.

So how does a team lose in 1955 when playing the way we acknowledge as status quo today?

In a stylistic clash of the titans, Edmonton finished more drives and ate up the time of possession, but Etcheverry’s incredible mark — arguably more impressive than Matt Dunigan’s regular-season mark of 713-yards in 1994 based on historical context — stands the test of time.

If the record came crashing down in 2021, would it surprise anyone? Not likely, but that’s been the case for 66-straight years. Somehow 12 years after his passing, here we are with Sam Etcheverry holding strong on the most unlikely of CFL passing achievements.