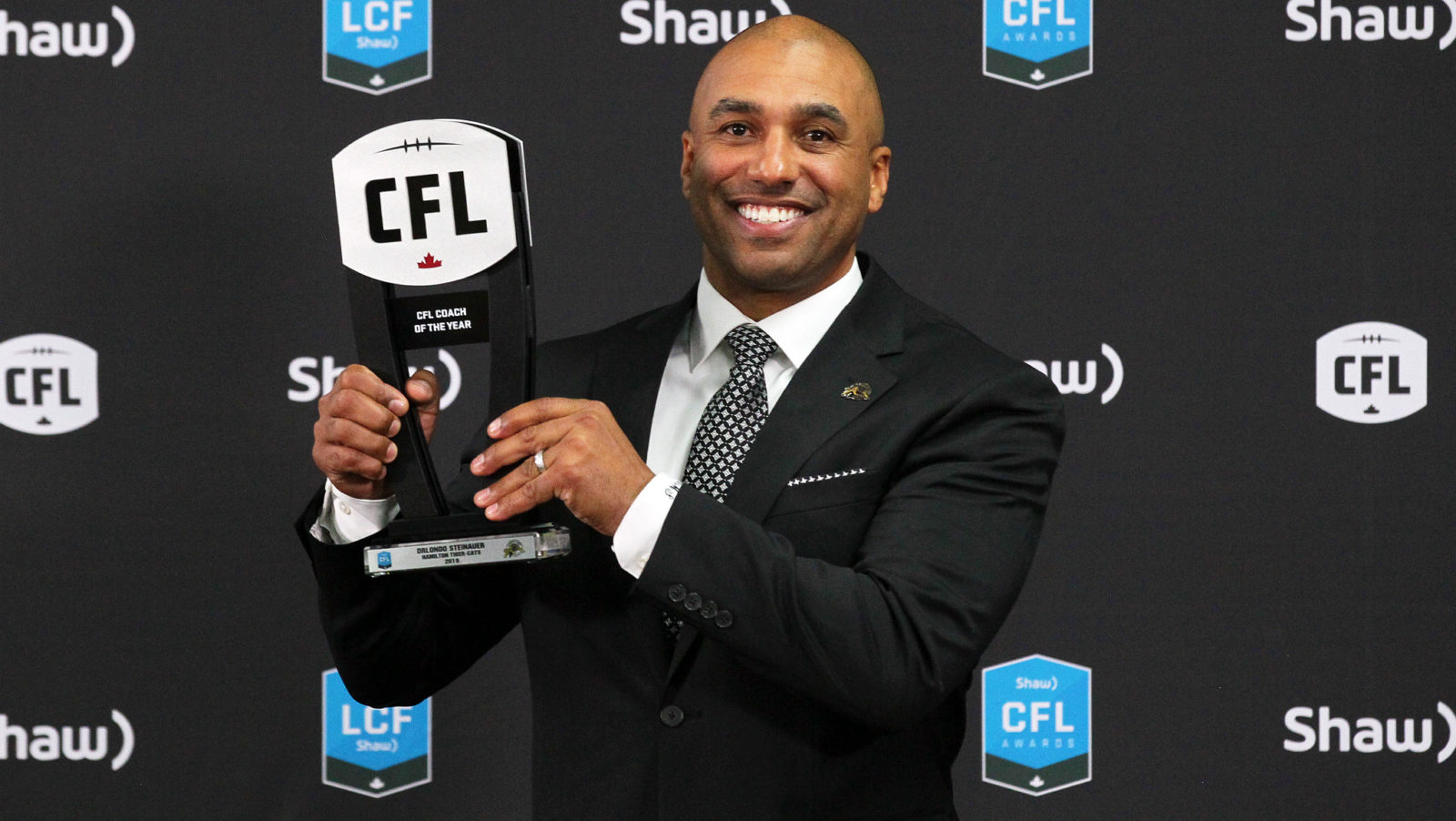 From playing on concrete and carpet, expansive use of fullbacks in offensive attacks and VHS film review, Orlondo Steinauer’s football life reads like a map that could describe much of the CFL’s last two decades.

Spending five weeks with the Ottawa Rough Riders in 1996, helping win Hamilton’s first Grey Cup in over a decade in 1999, and reaching the mountain top with his former Labour Day enemy Toronto in 2004.

Before all the success came the uncertainty and grind of a young man from Seattle, Washington just hoping to grab someone’s attention in a position of power who might want him to play football for their team. That chance came in the nation’s capital.

RELATED
» Canadian Football Hall of Fame unveils its class of 2021
» O’Leary: Driven to give, Mitchell heads to the Hall
» Steinberg’s MMQB: Get refreshed with a 2019 crash course, part 3

“I was aware of the CFL. I was not aware of where Ottawa was. I had actually been enrolled in teachers college because I had been released by the Detroit Lions and figured that I had a good run and that was it,” Steinauer said. “Ottawa called and asked if I’d come on their PR, which excited me because I came from the NFL and I thought the practice roster is pretty good money. Then they said come up it’ll be about $500 a week.”

The shock on Steinauer’s face today recounting the story clearly displays how etched in stone this brush with financial reality was, but money wasn’t the only aspect of CFL football he’d have to wrap his mind around before his career took off.

“A defensive back had an ankle injury so I went to Ottawa and I guess they were on their second head coach. I watched a game we lost where the coach made a drastic mistake to not go for two, we went for one and lost the game and there was a player that quit in the locker room and I thought what is this?”

At that point, Ottawa was a clearly struggling franchise which offered little more to a young Steinauer than an opportunity to show his ability on film.

“Banks might not cash your cheques, so I paid the fee and would cash the cheques. I never put anything in the bank. We ended up 3-15 that year but you wouldn’t have known it. Fans were asking for my autograph and I was just playing special teams. Then they ended up folding.”

Steinauer had no expectation of being taken in the Ottawa dispersal draft. Why would he after such a short time in Ottawa with little more than two games of special teams film?

Forever the humble pragmatist, the then 24-year-old Steinauer was surprised when Hamilton took him 12th overall, creating a black-and-gold bond that holds strong another 24-years later.

“I led the league in picks in 1997 and my career was kick-started.”

“You don’t play for accolades, you play the game to the best of your ability and help make people around you better.”

Fellow Ticats defender Rob Hitchcock would attempt to explain the significance of it all to Orlondo, but the self-described ‘green’ Steinauer has never fed off external motivation in the form of recognition. A theme that holds true today as he reaches the height of public appreciation possible.

“Being named a Hall-of-Famer, you reflect on the journey, but not just professionally. I thought of my Pop Warner coaches first,” Steinauer said. “When you start playing football, you play for the love of the game. You want to go to high school and play, then the next step is I want a scholarship but at the end of the day, you boil it down, and it’s really just about wanting to play football. I went to Western Washington, which you attend to become an engineer which I wasn’t, or become a teacher, which is what I went to do.”

Teaching would have to wait beyond Steinauer’s Ticat playing days, which came to a close after just four years. Steinauer landed in Toronto and continued to produce as a key part of Argonauts’ dominant 2004 Grey Cup champion defence.

“We went 14 quarters without a touchdown being scored on us. We gave up something like 15-points per game and we weren’t the most talented, but we were hard to beat,” Steinauer said. “In the locker room after the game, everybody had their personal pint and were partying and I was just sitting there taking it in because I hadn’t enough in ‘99. I watched everybody enjoy having no doubt that’s where we were meant to be at the end of that year.” 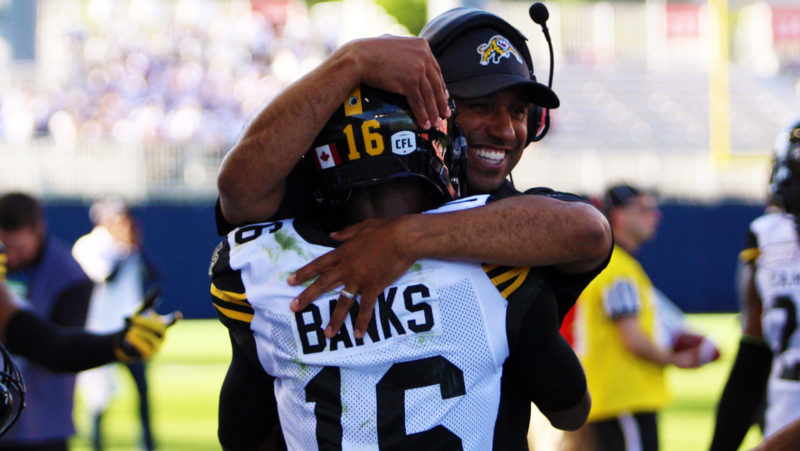 Orlondo Steinauer has transitioned from a Hall-of-Fame playing career into a successful stint as the head coach of the Hamilton Tiger-Cats. (Shannon Vizniowski/CFL.ca)

For a man with eight multi-interception games (tied for 10th all-time) and one of only two players with three games of three or more interceptions (a distinction shared with Terry Irvin), Steinauer has always maintained perspective on how those around him have helped shape his success, while rarely honouring the ways in which he shaped theirs.

“I never wanted to let the person next to me down, and within that, you become the best you can be. It’s not the accomplishments that matter but it’s that mentality and process that’s led me here today,” Steinauer said. “You don’t play for accolades, you play the game to the best of your ability and help make people around you better. Diversity is strength was a great shirt, but our power is in our unity and that’s what I love about Canada and the CFL. That’s never changed from my beginnings.”

From the Seattle kid “wearing number 10 with a bad haircut” to a multiple time CFL All-Star, two-time Grey Cup champion as a player and now Hall-of-Famer, Orlondo Steinauer might not be used to accepting adulation, but he’s earned every penny of it as a quintessential CFL success story.

Recently, he earned another accolade, most wins (15) by a rookie head coach in CFL history en route to being named CFL Coach of The Year.

He used that podium to recognize those around him. Expect nothing less on Hall of Fame induction night, but know that Steinauer will one day stand in front of his Canadian Football Hall of Fame bust smiling, when he finally recognizes how much CFL fans appreciate his contribution to our great game and what HE has accomplished in a tremendous journey.