Marv Levy grateful for Montreal in Hall of Fame induction 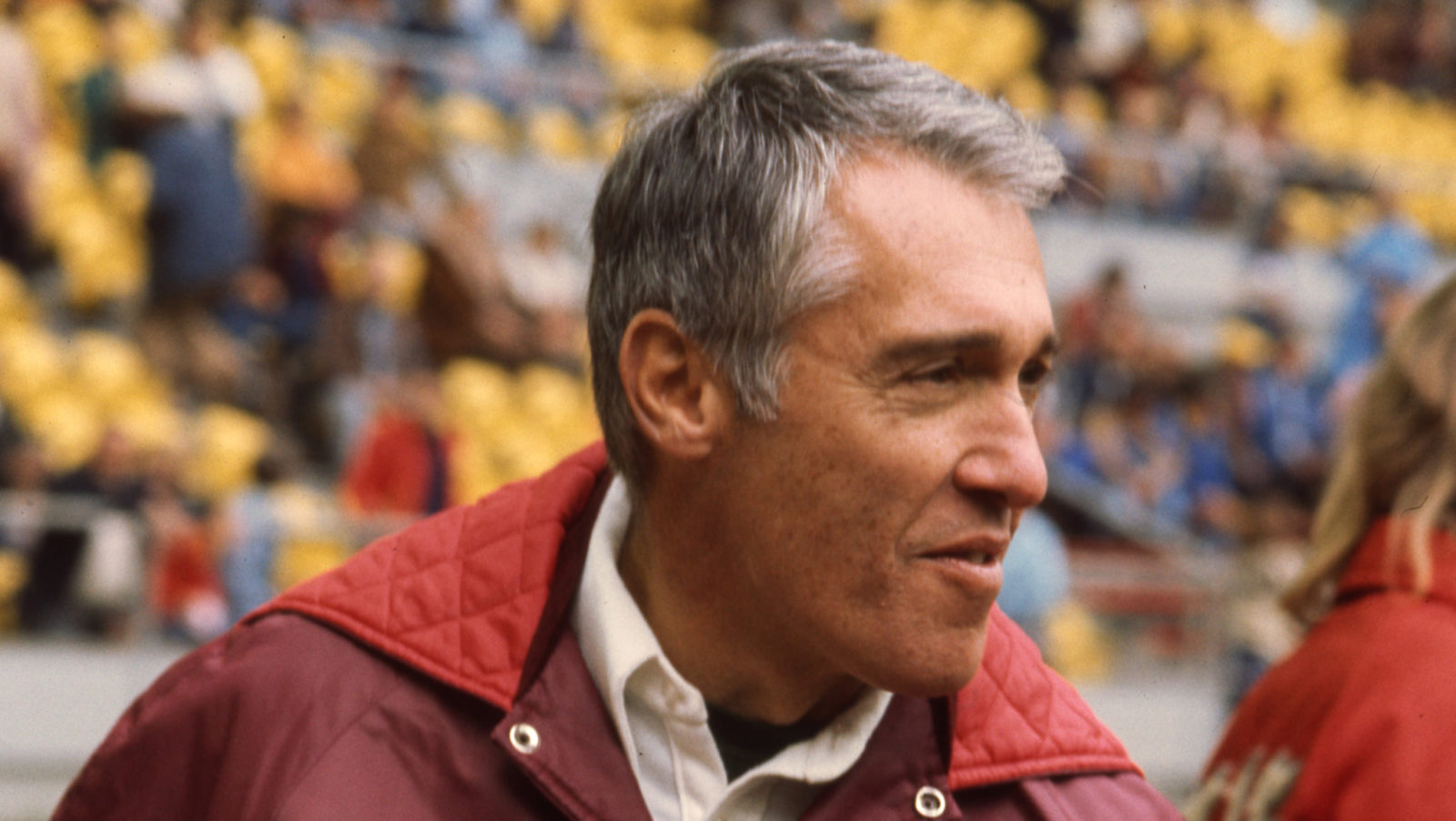 Marv Levy grateful for Montreal in Hall of Fame induction

He may have left Montreal many years ago. But it seems to me that Montreal maybe never left Marv Levy.

The 95-year-old coaching legend, now a Canadian Football Hall of Fame inductee, cannot stop gushing about the city where he was a gridiron king, for five years during the 1970’s.

“I remember the culture in Montreal,” says Levy, with great fondness clearly evident in his voice. “How much I savoured it and liked it. I loved going up there.”

A conversation with Marv Levy is like wrapping yourself in a towel fresh from the dryer. He’s warm, he’s friendly, he is gracious in tremendous measure. From what I understand, it’s always that way with him.

One of the sport’s all-time gentlemen, Levy has just been informed that he has gotten the call to the hall, and he is in a buoyant mood, overflowing with gratitude and praise for the city of Montreal, an Alouettes franchise that entrusted him as leader, and those who have been vocal in making a push to have him inducted, decades after his exit from Canadian football.

“I’m aware that they did campaign on my behalf,” Levy says of the Alouettes organization, “not at my behest. They did it, unknown to me. I’m very grateful to them, however.”

Already a member of the Pro Football Hall of Fame, in Canton, Ohio (inducted in 2001), Levy now becomes just the third person in history to be enshrined in both the American and Canadian halls, joining Bud Grant and Warren Moon.

His career in coaching spanned five decades, taking him through such places as the University of California at Berkeley, with pro tenures in Philadelphia, Los Angeles, Washington, Kansas City and, of course, Buffalo, where he coached the Bills to 112 regular season wins, the most in franchise history.

“My career spanned 47 years. Only five of them were there with the Alouettes but they are really so prominent in my memories. Those five years there. That was my first professional head coaching, opportunity.”

Before he took on head coaching jobs in Kansas City and Buffalo, Levy was hired by the Als in time for the 1973 campaign. The five seasons he spent in Montreal left an indelible mark on him.

“My career spanned 47 years,” says Levy. “Only five of them were there with the Alouettes but they are really so prominent in my memories. Those five years there. That was my first professional head coaching, opportunity.”

Levy won two Grey Cups as the head coach of the Alouettes, his first coming in 1974, the second in 1977, in what would turn out to be his last game on the Alouettes sideline. On that journey, he would accumulate a win/loss record of 43-31-4 during the regular season, and 7-3 in the post-season. In 1974, Levy won the Annis Stukus Trophy as the CFL’s Coach of the Year.

“They were overwhelmingly meaningful to me,” adds Levy of those Montreal years. “I remember, fondly, that I made many great friends. I learned so much history, and savoured so much of Montreal, itself. Of the life there. It was a magnificent experience. I’m so grateful for it.”

Levy flexed his head coaching muscles with Alouette teams that were the dominant force in the East during the 1970’s. Those two Grey Cups could easily have been three, with the Alouettes losing the 1975 championship to Edmonton. A troublesome placement on a 19-yard field goal attempt, with less than a minute to play, led to just a Montreal single being scored in a 9-8 loss. “A heartbreaking one,” says Levy.

Graciously deflecting credit for his successes in Montreal, Levy shines a light on the entire organization when asked to talk about the secrets of those triumphs.

“You know, it’s not a great coach,” he begins, offering his thoughts on teamwork. “It’s not a great quarterback. It’s total organization that wins. And that was a wonderfully run organization starting right with the owner, Sam Berger. I was blessed with an owner like Sam Berger and his wonderful young family.”

He didn’t know it at the time, but Levy’s very productive Montreal years would provide a link to his later prosperity, in the NFL. “We had a scout we hired, part-time.” Levy says. “A fella named Bill Polian. That’s where we first met.”

Polian would go on to become the general manager of the Buffalo Bills, hiring Levy to be the team’s head coach in 1986. Levy remained in that job until 1997.

The 1974 Grey Cup victory was sweet, of course, being Levy’s first. However, the fabled 1977 game with its chilly temperatures and slippery field, holds a special place in Levy’s heart for a number of reasons.

“Probably the one I do remember the most, of course, is the Ice Bowl game,” says Levy. “Yes. It was my last game there in Montreal. I didn’t know at the time that it would be. But the nature of it, and the 68,000 fans that were there…” He trails off, seemingly contented.

The Alouettes trounced Edmonton in that game at Olympic Stadium, by a score of 41-6. The icy field gave the Alouettes an advantage, once defender Tony Proudfoot came up with the idea to use a staple gun to add traction to the soles of the Montreal players’ shoes. Levy didn’t know of the development at the time.

“No! I did not,” he says, laughing. Even he was perplexed – happily so – at how his players were getting better traction than their opponents. “Unbeknownst to me, they they put the staples in their shoes.”

A commanding victory, in front of a big crowd, in a city he loved, made the 1977 Grey Cup especially memorable for Levy. But there was more.

“My father came to that game,” recalls Levy, noting that Sam Levy made a special trip up from the U.S. in order to see his son’s team play. Sam, it turns out, had lived in Montreal for a time back when he was very, very young. Marv’s grandparents, on the way to a new life in America, stayed in Montreal for about a half a year when Sam was four-years-old. That’s another link for Levy, to the city that has stayed firmly in his heart.

“All of those are part of my memories,” he says of the Grey Cup games and the people he worked with in the Alouettes organization.

Then, unprompted and without delay, he returns to professing his love for the city he would leave after five years, the city that would, however, never really leave him.

“And the culture and living in Montreal was very uplifting,” he says, one more time.

THAT GUY’S GOT SOME POTENTIAL

Levy speaks fondly of the players he coached in Montreal, and mentions that he was pleased to be seated at a table with former Alouettes Peter Dalla Riva and Gabriel Gregoire at a dinner in Chicago a couple of years ago.

“I remember the people I was associated with there were such high character, their personalities varied,” says Levy of his Alouettes family.

One of those varied personalities would have been that of a linebacker named Wally Buono, who went on to become the winningest head coach in CFL history, of course.

“He wasn’t a real big guy as far as football players go,” remembers Levy. “But he sure did perform well. And he was very dedicated as a player and carried that over into his coaching years.”

Levy couldn’t have foreseen, at the time, that Buono would scale the heights to the very summit of CFL coaching, but he does remember seeing a little something in the young player.

“At that time, I wouldn’t have known that,” says Levy of Buono’s own hall of fame coaching pedigree. “But you would have said this guy had potential to be a coach. I’d say yeah, boy, he’s got it. He’s good.”

“I followed his career with great interest and I’m so proud of him. And so proud to be able to say that I was his coach.”