Patience pays off for HOF-bound sack master Will Johnson

Patience pays off for HOF-bound sack master Will Johnson

When the phone finally rang and Will Johnson got the news he’d been waiting years for, he looked at the calendar and was naturally suspicious.

“I thought it might have been an April Fool’s joke,” Johnson said, the reality of being a part of the 2021 Canadian Football Hall of Fame now fully sunk in.

“I did call my son and I kind of started weeping because it’s all about what I’ve been teaching my kids. You work hard in life and you’ll eventually be rewarded.”

In his nine seasons in the CFL, Johnson certainly worked hard and has a loaded resume to show for it. Over 132 games (1989 to 1996 with Calgary, 1997 with Saskatchewan), he had 99 sacks, finishing his career 13th on the CFL’s all-time list. He played in three Grey Cups, winning one with the Stampeders in 1992 and was named a West Division All-Star six times and a CFL All-Star five times.

A Monroe, Louisiana native that had just spent some time with the Chicago Bears and the New Orleans Saints, Johnson didn’t know of the CFL when the Stamps first approached him, but they came along at the right time.

His relationship with his college sweetheart had come to an end and he took it hard. It impacted his desire to play football, or at least at the level he’d shown he was capable of when he was a rookie with the Bears in 1987. 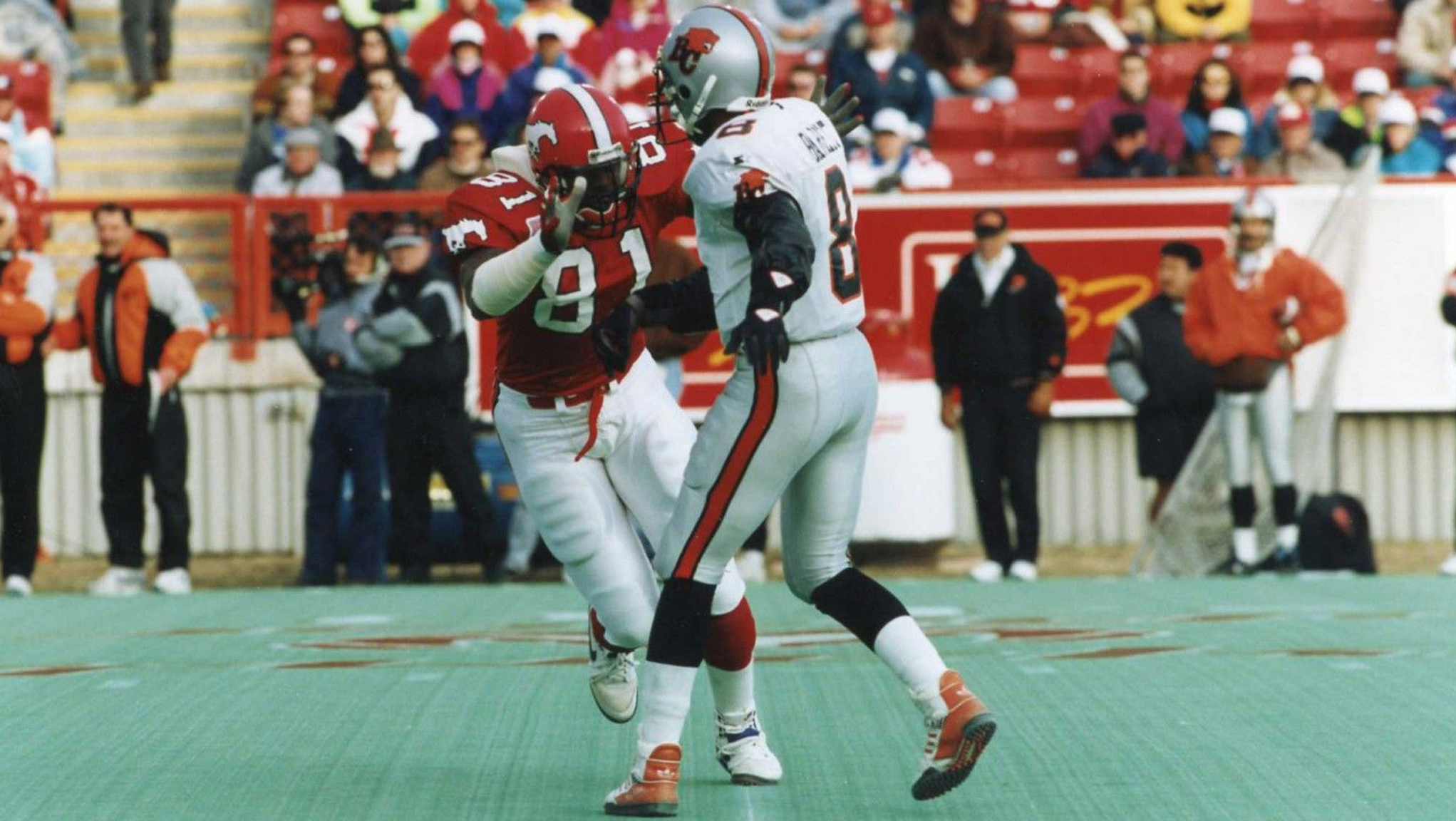 Will Johnson found a football home in Calgary and built a Hall of Fame-worthy career in the process, with 99 sacks over nine CFL seasons (Photo: The Canadian Press)

“I didn’t realize they had a team in Canada at that time. I’m from Louisiana, I’m a southern boy. I don’t know nothing past Arkansas,” he said with a laugh.

“I come up and I get the opportunity to play again and it’s pulled me away from my situation and I start to regain my desire to play. I appreciate the Calgary Stampeders…for giving me an opportunity to come up here and basically get my head right.

“From what I’ve been told in my performances, it wasn’t a lack of talent. It was just something that was personal going on in my life that bothered me that I couldn’t get away from and I needed to leave the country obviously to get away from it and get over it. Coming up to Calgary helped me to do that.

“I just decided to stay up here and see what this environment would be like for me and I created a whole new me.”

“I just decided to stay up here and see what this environment would be like for me and I created a whole new me.” — Will Johnson on getting a fresh start on life in Canada

That whole new Will Johnson helped the Stamps through a highly successful run that saw them finish first place in five of the seven seasons he was with them and in second the other two years. A linebacker in the NFL, Johnson played rush end in the CFL and loved every single down of it. He led the league in sacks in 1991 and 1994 and had nine or more sacks in eight of his nine seasons in the league.

He was named the West Division Most Outstanding Defensive Player in 1991, after a 15-sack season and finished his career with 288 tackles, eight fumble recoveries and one interception.

It’s been 24 years since Johnson left the football field and Stamps fans have waited almost that long for him to take his place in the hall of fame. Johnson felt he was deserving but was very patient as he waited for the long process to unfold.

“That this is finally happening makes me even more joyous. I said if it did happen I’d write a book. Now I’ve got a couple of books I’ll be writing. I feel vindicated for what I’ve done and I feel acknowledged and it’s a wholesome feeling.”

When the call finally came, it was Johnson’s old teammate and current TSN colour analyst Duane Forde on the other end delivering the good news. Johnson thought about his playing career, his teammates and the journey he made and the impact it’s all had on him. Then he thought about his children and those values he’s instilled in them through their lives. There was no fooling, despite the date. He’s a Hall of Famer.

“It wasn’t a matter of if I’d be inducted; it was when I’m going to get inducted, to me,” he said.

“It shows I did work hard and I’m finally getting rewarded for that hard work. I push that on my kids. They’re all university students, graduated. There’s one more left, an engineering student. I tried to instill that in my kids, that work ethic that I’ve had all of my life.”