The class of 2021 for the Canadian Hall of Fame is as star-studded as ever. The player’s category includes two of the CFL’s greatest ever pass rushers in Will Johnson and Mike Walker. It includes an all-time ball hawk in Don Wilson. And, from more recent viewings, it includes Orlondo Steinauer and Nik Lewis.

For me, the latter two future inductees resound most for me, as they were both established superstars when I started covering the league in the mid-2000’s. At that time, Steinauer’s career was winding down, while Lewis was just getting started. But as both guys got the call to the hall last week, one characteristic really links them for me: sustained excellence.

Steinauer emerged as a defensive star as early as his second CFL season, upon joining the Hamilton Tiger-Cats after one year with the Ottawa Rough Riders. Steinauer picked up his first league All-Star nod that season, something he’d do four more times after joining the Toronto Argonauts for the 2001 season.

That’s a pretty good body of work. It’s even better when you add the fact Steinauer finished his career with 1,178 interception return yards, second only to Less Browne (1,508) in league history. But the thing that stands out most is how Steinauer sustained his elite level until the end of his playing career.

For instance, Steinauer finished second overall with seven interceptions in 2007, his final full season in the league. Steinauer wasn’t able to complete his final season one year later, but he had already racked up 19 tackles and an interception before it came to an end. From the time he burst onto the scene right up until he stopped playing, Steinauer was one of the CFL’s top safeties. That’s not an easy thing to do for someone playing into their mid-30’s.

Lewis’s career trajectory was pretty similar, just on the other side of the ball. Like Steinauer, Lewis exploded onto the CFL scene and was named Rookie of the Year in 2004. The resume is just as impressive, too: three league All-Star nods and two Grey Cup rings.

And, just like his CFHOF classmate Steinauer, it was what Lewis did at the end of his career that stood out as much as anything else. Lewis’s final 18-game season saw him go over 1,000 receiving yards for the tenth and final time in his career. He led the Alouettes with 1,136 yards that season and finished eighth overall. Heck, despite only playing 14 games in his final season one year later, Lewis still finished third on the team in receiving yards.

Whether it was early on or towards the end, you could always count on Lewis for hard-fought, physical yards over the middle and at important times. Lewis’s possession game was of the very highest caliber, which helped him finish his career with 1,051 total receptions, the most ever. His 13,778 total yards is also fifth all-time, behind only Geroy Simon (16,352), Milt Stegall, Allen Pitts, and Darren Flutie. Yeah…that’s some pretty impressive longevity.

For a couple players out of relatively unknown colleges, Lewis and Steinauer did pretty well for themselves. Lewis attended Division II Southern Arkansas, while Steinauer’s Western Washington was an NAIA school during his tenure. It’s just another bond that links their incredible careers.

It sure is awesome to have testing results to dive into from the CFL National and Regional Combine presented by New Era from last week. I can’t wait for Marshall Ferguson to really start breaking it down, but there were some definite eye-catching results.

Regina running back Kyle Borsa and Western defensive end Nicolas Theriault popped off the only sub-4.50 times in the forty-yard dash with Borsa leading the way at 4.46 seconds. At 4.00 seconds, Borsa also posted the best time in the shuttle, while Calgary offensive lineman pounded out 32 bench press reps.

This year’s Combine season is more different than ever, as it was done virtually due to the ongoing Covid-19 situation. While they may not be the tools they usually are, both the National and Regional Combines will be immensely helpful to scouting staffs as they enter next month’s 2021 CFL Draft, the most unprecedented one ever.

Sometimes it’s hard to get a handle on how much a player means to a franchise or community when you’re not based there. That was the case for me with recently retired Ryan King. It’s not anymore. 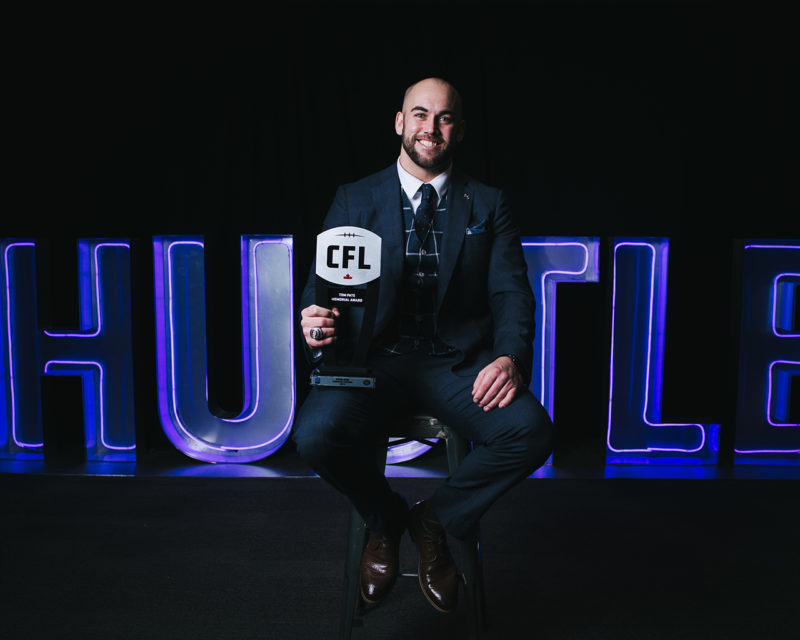 When King announced his retirement after eight seasons in Edmonton, the outpouring on Twitter was immediate. From media colleagues to fans of the green and gold, it became clear how much King meant to the organization and the community. It’s cool when you can go do a quick search to find out why.

King was a great long snapper and played 122 career games with his hometown team. He also was a part of the team’s 2015 Grey Cup title season. But it was King’s work off the field that endeared him to fans and media alike. It’s why he was named the 2018 winner of the Tom Pate Award, given to a player “with outstanding sportsmanship and someone who has made a significant contribution to his team, his community and association.”

I think King passed the test on those criteria with flying colours. He worked extensively with the Canadian Armed Forces and was outspoken for causes like anti-bullying and the elimination of domestic violence. King was heavily involved in grassroots football, too, and gave back to the same programs that helped get him to the highest level in this country.

I’m based in Calgary and saw the influence of a guy like Randy Chevrier, a fellow long snapper, in a less high profile position. Outside of the Edmonton market, I’m not sure how many people were aware of King’s true impact. I’m glad it has become more evident since announcing his retirement last week.