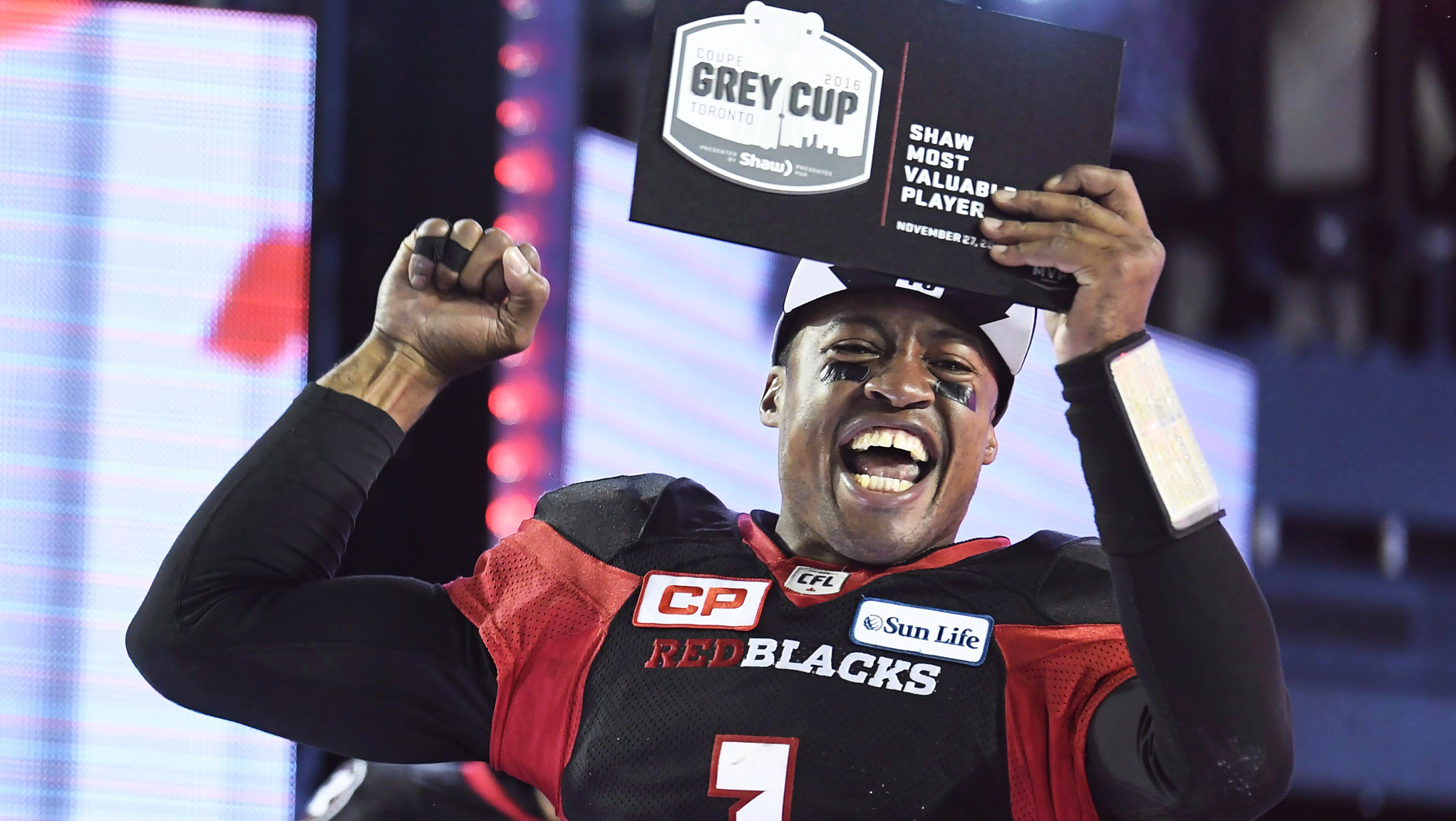 For my final travel back in time to previous Grey Cups in conjunction with CFL.ca releasing all the Grey Cups on the Grey Cup on Demand Portal powered by Mark’s, I’m going back to the game I’ve written about more than any other Championship, the 2016 Grey Cup that saw Ottawa upset Calgary 39-33. I speak no hyperbole when I say this is the craziest result I had ever seen in a Grey Cup.

The Stampeders went 15-2-1 in the elite Western Division while the REDBLACKS went 8-9-1. Calgary scored exactly 100 more points and allowed 129 fewer points than Ottawa. The Stamps went in as a nine-point favourite. I remember telling everyone to take the points. I’m so sorry but you really can’t blame me.

I have yelled and screamed so many times this was the best single-game performance I’ve ever seen by a quarterback. Calgary swaggered into BMO Field with five defensive players named CFL All-Stars, not just named Western Division All-Stars. In 2016 Micah Johnson, Charleston Hughes, Tommie Campbell, Ciante Evans and Jamar Wall were all considered the best at their respective positions. The Calgary defence was so good that Alex Singleton was not even a top-5 defender on that menacing squad. Alex would go on to win the Most Outstanding Defensive Player Award a year later. Despite all that elite talent whose sole focus was to knock out Henry Burris, the Ottawa passer would put up 461 yards passing, three touchdowns and scored two more on the ground.

So, in honour of Burris beating the best of the best on the biggest stage I’m going to look back at Burris’ biggest moments in his greatest game as a CFL quarterback.

RELATED
» Grey Cup games from the 2010’s now available on the Grey Cup Portal
» Game Capsule: Watch every scoring play from the 104th Grey Cup
» Watch the REDBLCAKS get awarded the Grey Cup

7:55 — Henry Burris was close to being a spectator for the 104th Grey Cup! This is why you have to re-watch these games because there is so much you forget. Maybe I’m just at that age where every time I learn something new I have to boot out an existing fact from my brain. About an hour before kickoff reports started to come out that Burris was banged up with some mystery injury and may not be able to play. After a 20-yard completion to Greg Ellingson TSN’s Glen Suitor is focusing on Burris’ body language, how he looks dropping back to pass, is there a noticeable limp? There is not! Instead, Henry capitalizes on a confused Calgary defence and delivers to a wide open Ellingson. Game on.

9:10 — Hitting a receiver in stride is not the most eye-popping skill a quarterback can have. It certainly won’t get you on any Top-10 highlight pack but it usually leads to a lot of winning. This play is a simple quick out by Ellingson beating Jamar Wall for a 21-yard gain. What makes this routine play go for 20+ yards is Burris putting the ball in the perfect spot to capitalize on Ellingson’s speed. Greg doesn’t have to slow down or alter his route to collect the ball and just like that, the REDBLACKS are getting close to the Calgary end zone. This drive would end in a one-yard Burris touchdown plunge as Ottawa would open the scoring 7-0.

21:30 — TSN is showing a montage of Burris warming up before the game to see if he is physically good to go. Now I’m having one of those “what if” moments. What would have happened if it was Trevor Harris who started on that day?

22:30 — Feels like head coach Rick Campbell and offensive coordinator Jaime Elizondo have put together a plan to target Jamar Wall. On most teams you would avoid throwing it at Wall but with Tommie Campbell and Ciante Evans out there, I guess you have to pick your poison. Burris uncorks a wide side throw to Ernest Jackson that goes down as a 21-yard gain but travelled about 40 yards or so in the air. Burris’ arm is lively today as that pass did not hang up in the air. This drive would end with a field goal and a 10-7 Ottawa lead.

49:20 — The first touchdown pass of the game for Burris is a herky-jerky jump pass over Ja’Gared Davis to Patrick Lavoie. Davis had a beat on the Ottawa passer but Burris’ quick thinking freezes Davis long enough for the scoring play. Ottawa is now up 17-7. It was around this point where the collective CFL world started wondering if there was an upset coming.

59:45 — Time now for the sneaky big play that gets lost in a sea of other memorable moments part of my column. There is just over two minutes left in the half and Ottawa is up 17-7. On second and 10, Burris is deep in his own end zone and doesn’t have anyone open. If you pause your screen before he throws, I bet you’re thinking Ottawa will concede the safety, kick off deep and hope to hold on for a 17-9 halftime lead. But with that amount of time Calgary easily could have gone down the field for an end of half touchdown. Suddenly you’re looking at a very different game. The key for so many upsets is the underdog needs to race out to big lead before the giant awakens. Unpause your screen and you’ll see Burris calmly rollout to his right and hit Brad Sinopoli for a 31-yard catch and run. Incredible cool for Burris, who was being chased by Davis. Also, it needs to be discussed; the REDBLACKS offensive line is putting in some serious work up front. This play needed time and it needed someone to block Charleston Hughes. On this pass, the five Ottawa blockers were up for the challenge. Instead of giving the ball back, Ottawa would go down and kick a field goal as the underdogs would confidently head into halftime with a 20-7 lead. An upset is brewing.

1:10:05 — We move ahead to the second half and Ottawa still has it going on. Burris, who is somehow unaffected by Micah Johnson, hits a well-covered Sinopoli for 20. Really not much more Josh Bell could have done on this.

1:12:45 — The Calgary rush is coming but the Burris pass is faster hitting Sinopoli in a tight window for a nine-yard touchdown. Sinopoli did all the heavy lifting for the final two yards and holy moly Ottawa is up 27-7. The REDBLACKS are going to do this.

1:50:50 — Yeah, never mind what I just said, sorry Ottawa, I didn’t mean to jinx it. Ciante Evans is locked into Burris and easily picks off a pass intended for Juron Criner. Henry never saw it coming. Cue the inevitable Calgary comeback.

1:54:23 — Call it arrogance, confidence or the ability to forget but soon after Burris comes back with the same play to the same target but this time it works for 22 yards to Criner. You know your quarterback is feeling it when he throws wide side at Ciante Evans.

1:55:37 — The Stamps defensive line is starting to look tired on this deep throw to a leaping Criner. Calgary sent five but Burris had a clean pocket. I wonder how many Calgary fans will watch this play and grumble that there was a slight push off by Criner on Matt Bucknor? Two plays later, Burris would score his second rushing touchdown and Ottawa would have a 33-23 lead that I’m sure they wouldn’t blow.

2:32:00 —  Well of course they did, but did you really think Calgary would just roll over and die? The Stampeders scored 10 points in the final 2:21 to send the game to overtime. To send it to this moment. The game winning touchdown pass to Ernest Jackson had all the elements that went into Ottawa winning the Grey Cup.

The offensive line withstood the charge of Micah Johnson and Ja’Gared Davis giving Burris more than enough time to patiently go through his reads and hit Jackson in stride for the 18-yard touchdown. The play will be remembered for Jackson bobbling the ball before securing it as he crosses the goal line but really this one pass sums up all the different parts that had to work for Ottawa to lay claim to one of the game’s greatest upsets.

This was such a fun game to re-live! Make sure to check out more classics on the Grey Cup on Demand Portal.